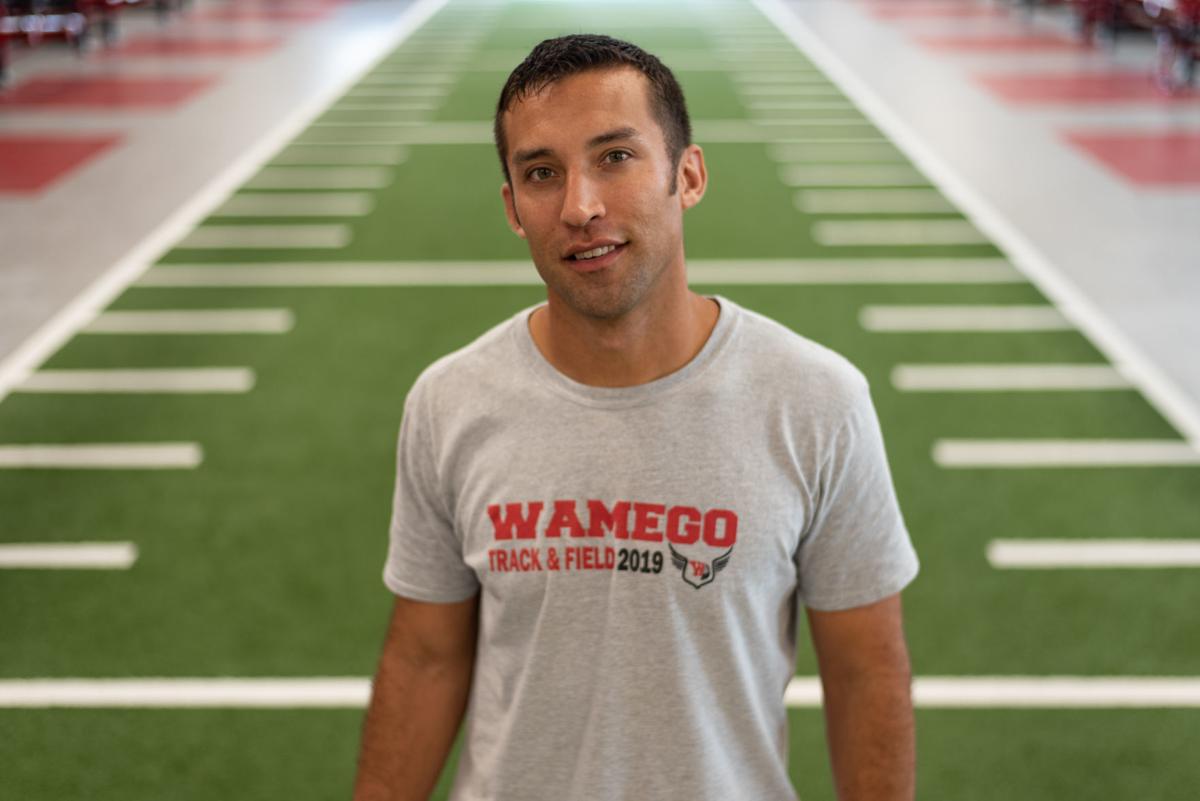 Wamego High head football coach Weston Moody stands in the school’s weight room. Entering his second season with the program, Moody believes he has a dynamic duo in the backfield in Isiah Childs and Taybor Vetter. 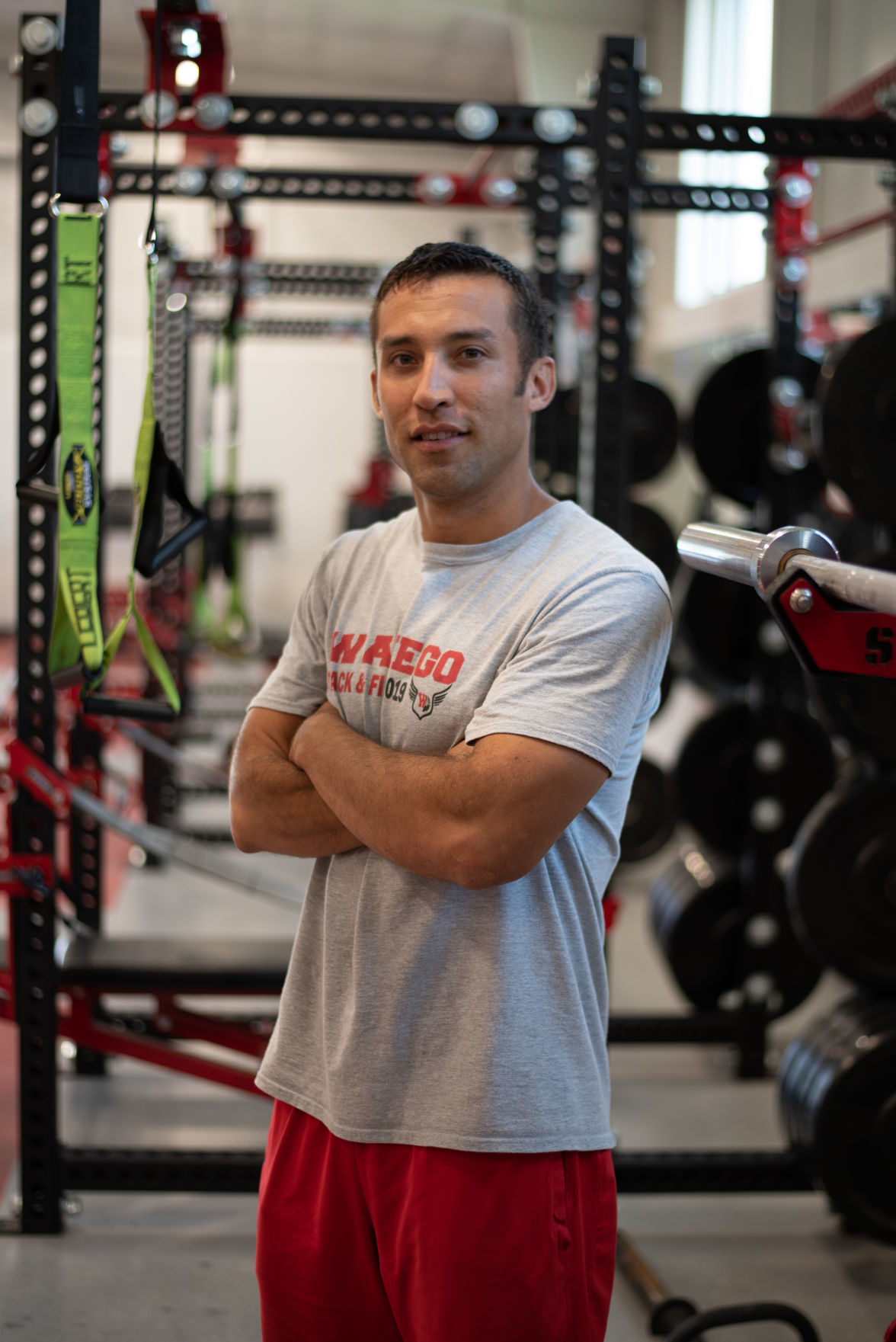 Weston Moody stands in the weight room at Wamego High School. Moody will be the head baseball coach at Wamego in 2019.

Wamego High head football coach Weston Moody stands in the school’s weight room. Entering his second season with the program, Moody believes he has a dynamic duo in the backfield in Isiah Childs and Taybor Vetter.

Weston Moody stands in the weight room at Wamego High School. Moody will be the head baseball coach at Wamego in 2019.

WAMEGO — Mount Mitchell is less than 5 miles outside Wamego. In a summer with lots of rain, such as this one, there are colorful wildflowers, bright sunsets and birds resting in the tall, red grass.

There was even more life than usual on Mount Mitchell on Aug. 12, when Weston Moody and the Wamego High School football team took a trip up the hill that assisted in making Kansas a free state; the hill was part of the Underground Railroad from 1857 to 1861. When the team reached the top, Moody gave his team a speech he hoped his players never would forget.

“It’s got a lot of history with the Underground Railroad and the crossroads of slavery,” Moody said. “And there is a church where guns were shipped over, too. I was just trying to show them some symbolic stuff to get them to understand a little bit of sacrifice and doing something for somebody else.”

Part of the trip up the hill included grouping up in fours and carrying each other up. Moody also participated, assisting in carrying some of the biggest players on the team.

“The basis of my speech was, ‘A lot of people died when they could have just said they weren’t going to help these people out, but they did something different, against the thread, for the greater good for somebody else,’” Moody said. “I think they bought into that.”

There’s new life in the Wamego football program, and everyone around them can feel it. The stadium upgraded the press box and added seats with back support. The school has a fresh weight room with large mirrors spanning the length of all the walls. In the center is 30 yards of turf. Moody said he wants Wamego to be the place to be and a program where players enjoy playing football.

“The way we are doing it is a little bit different than most, and you can think of it as negative if you want, but we try to brand it,” said Moody, whose team went 5-4 overall and fell in the first round of the Class 3A playoffs in his maiden campaign last season. “We try to brand our program, just like Nike or Reebok or other popular brands. We want people to be excited about being here. Let’s be honest: football is at a crossroads with trying to figure out how to get kids to come out, especially at the lower levels.”

Moody listed kids having the choice to play football as a big shift. When he was a kid, he said, kids just played football. Instead of being frustrated by this development, Moody said he and the program accepted it and are trying to embrace it.

“Now it’s like, ‘Hey, do you want to play football?’” Moody said. “It’s a choice to play. If you don’t want to play, we aren’t going to make you play. So to me, if you aren’t branding, what are you doing to get a kid to grind out? Because football is a tough sport. It’s hard; it’s not an easy game. Kids have to go out and work hard in the summer, they have to show up to weights, they have to do things that they normally might not have to if they were a baseball player or maybe a basketball player. For us, we try to brand our program around excitement, energy and getting kids pumped to come out.”

The team has new uniforms with white helmets being featured for the first time. The team was excited about the jerseys, Moody said. But at Wamego, it’s not going to be all pretty colors and field trips. The team has players, he said.

Along with running back Isiah Childs, who is headed to Akron after he graduates, the Red Raiders have Taybor Vetter helping out carrying the ball, Brad Sackrider under center, Jack Watson out wide and Alex Stutzman holding it down on both the offensive and defensive lines as a tackle.

Childs and Vetter headline the team as the star tandem in the backfield.

“Isiah has had a good summer,” Moody said. “He looks good and has played multiple positions, and he has really taken a leadership role, which I knew he would. Taybor Vetter is also another kid who meshed well. They really mesh well together. Their skill sets are very unique, so I feel like being able to move those guys around a bit is going to be advantageous for us.”

The biggest question mark Wamego critics have put forth, Moody said, is the strength of the offensive line. The specific question: “Can it hold up?” Moody told the linemen it was a hit against them, and that the blame, irrespective of the fact it’s a team game, could fall on them from the outside looking in.

“We’ve got players,” Moody said, knocking on his wood desk. “We really feel like we have a strong base of kids and hope by the time the playoffs come around we will have 22 guys who are together. Isiah could run the ball 40 times. I think people are going to have trouble tackling that guy.”

Life in the Red: Husker OC Lubick in video says year off 'lit a fire underneath me'