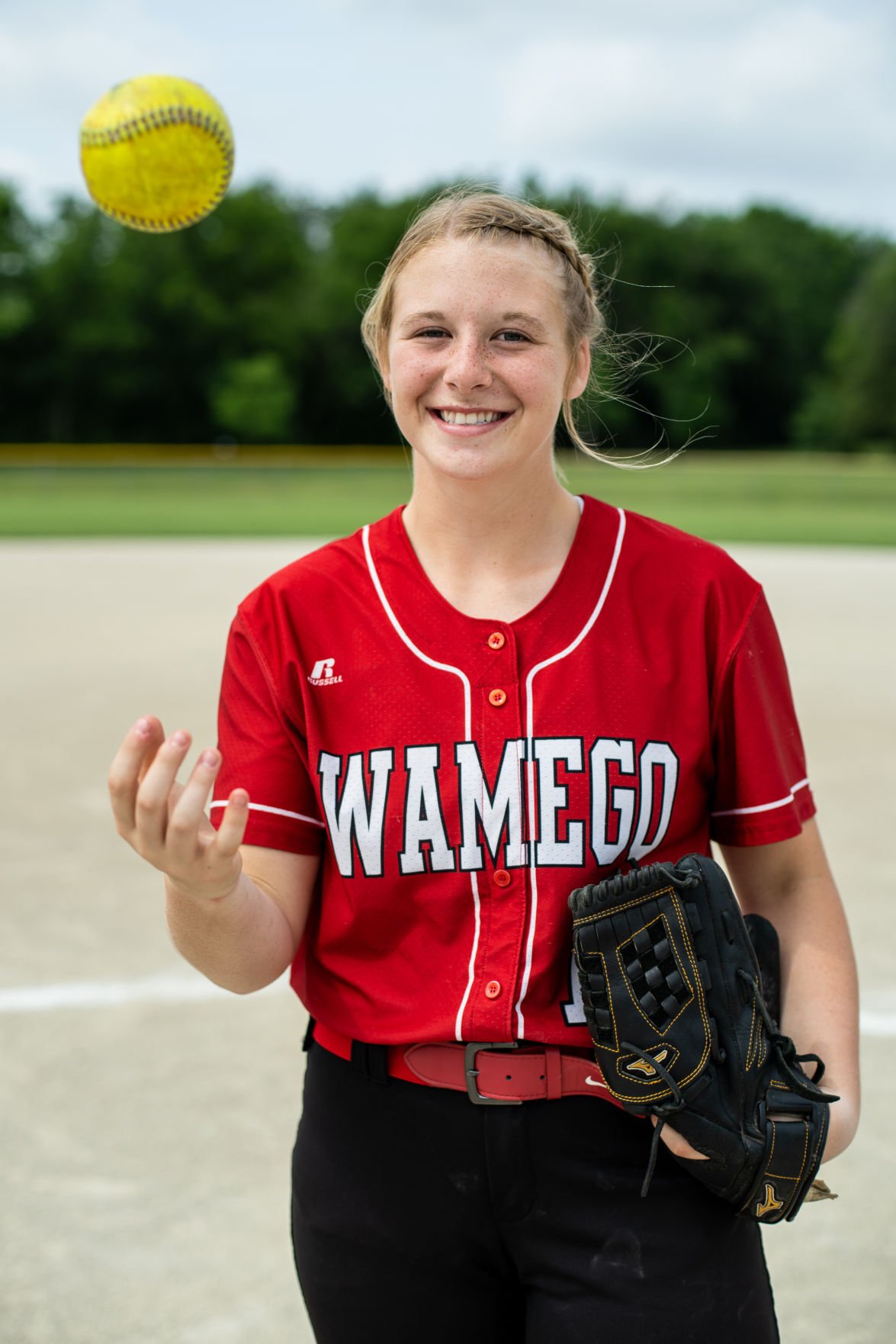 Wamego High’s Maya Gallagher smiles while standing at the Wamego Recreation Complex last week. Gallagher dominated during her sophomore season with the Lady Raiders, helping them capture the Class 4A state title. Gallagher was named The Mercury’s All-Flint Hills softball player of the year. 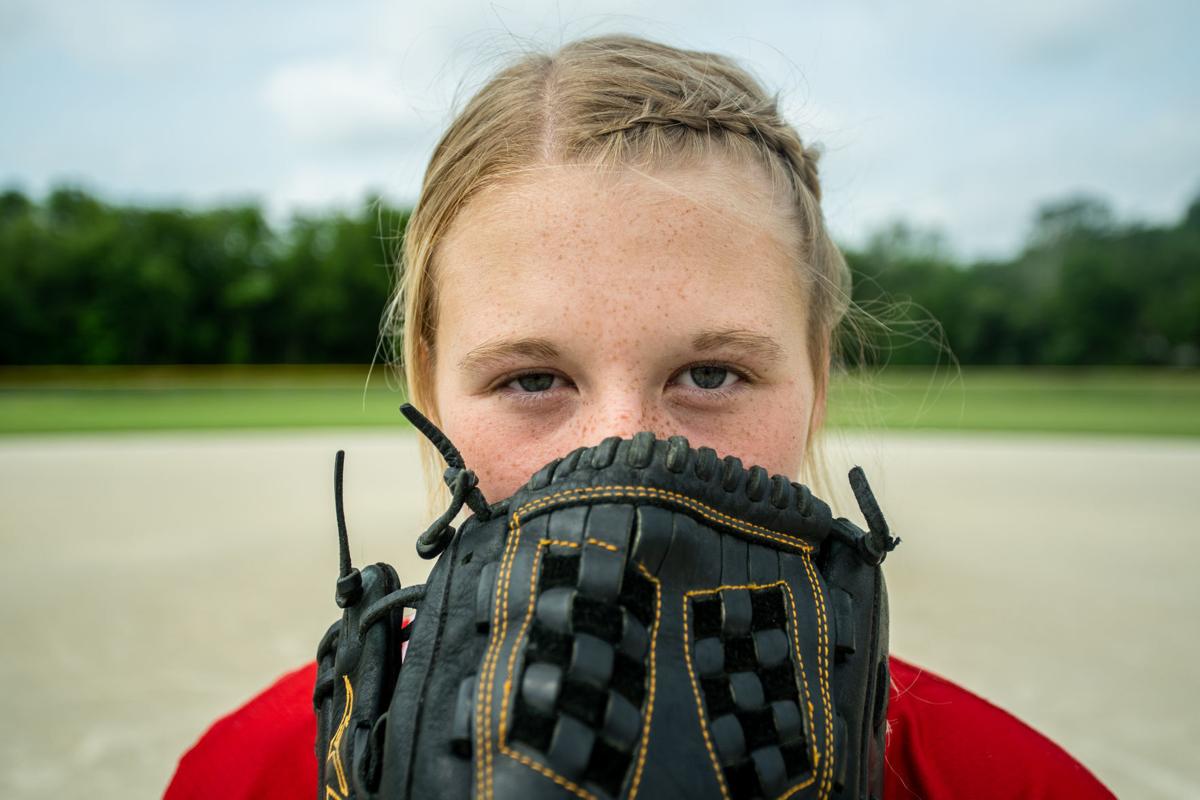 Gallagher peers over her glove at the Wamego Recreation Complex. Gallagher was a key part in the Lady Raiders’ run to the Class 4A state championship. It marked Wamego’s first softball state title in school history. 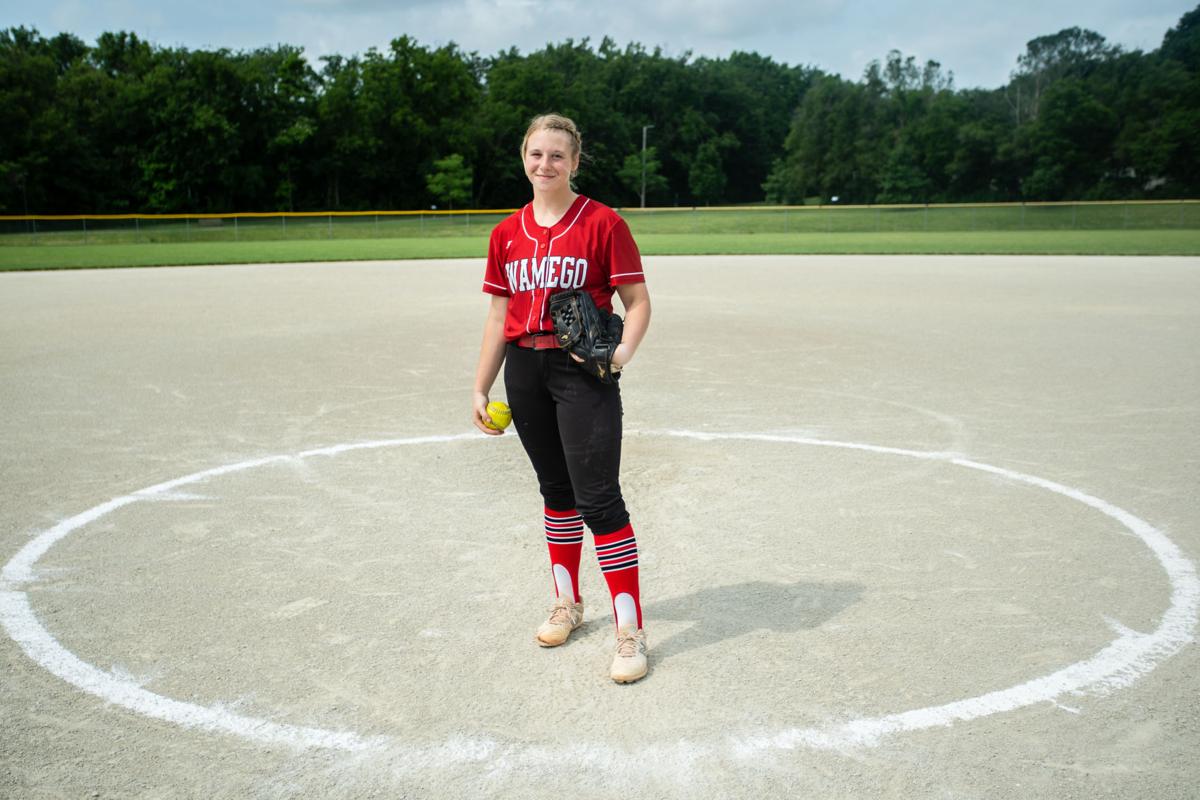 Wamego's Maya Gallagher, junior, stands for a portrait at the Wamego Recreation Complex Friday morning. Gallagher dominated her sophomore season with the Raiders, helping lead their way to a 4A state title. Gallagher was named the Mercury's 2021 All-Flint Hills softball player of the year.

Wamego High’s Maya Gallagher smiles while standing at the Wamego Recreation Complex last week. Gallagher dominated during her sophomore season with the Lady Raiders, helping them capture the Class 4A state title. Gallagher was named The Mercury’s All-Flint Hills softball player of the year.

Gallagher peers over her glove at the Wamego Recreation Complex. Gallagher was a key part in the Lady Raiders’ run to the Class 4A state championship. It marked Wamego’s first softball state title in school history.

Wamego's Maya Gallagher, junior, stands for a portrait at the Wamego Recreation Complex Friday morning. Gallagher dominated her sophomore season with the Raiders, helping lead their way to a 4A state title. Gallagher was named the Mercury's 2021 All-Flint Hills softball player of the year.

Gallagher’s pitch moved too fast and broke too far for Meyer to trust himself without protection. At 44, Meyer’s vision “isn’t what it used to be in my 20s.” And anything less than 20-20, he decided, wasn’t safe for catching Gallagher’s pitches with a naked face.

Luckily (or unluckily) for Class 4A batters, Gallagher rarely misses her target. In 17 games pitched in 2021, Gallagher struck out 115 batters and plunked two (she only walked six). Opponents could dig into the batter’s box confident in two outcomes: Gallagher wouldn’t hit them, but she probably wouldn’t put them on base, either.

Gallagher leveraged her “ridiculous” (Meyer’s word) control of seven pitches — fastball, curveball, changeup, screwball riseball, dropball and drop curveball — to finish 13-2 with a 2.14 ERA in her first varsity season. She earned wins in Wamego’s state quarterfinal game against Bishop Miege and the state title game against Andale … all while maintaining a .461 batting average.

For all those accomplishments, she’s earned another: The Mercury’s All-Flint Hills softball player of the year award. The honor most often is assigned to seniors, but throughout the spring, Gallagher displayed a maturity that transcended her inexperience. Meyer usually doesn’t wear a mask to catch sophomores or hand them the ball with the season in the balance, either.

But Gallagher has buffed conventional wisdom at each turn.

“She’s just that kind of kid,” Meyer said. “She trusts that she’s done the work, that she knows what she’s doing. Never does she not want to be in that (big) moment.”

Before Galllagher had awards, or titles, or even a breaking ball, she had speed.

Today, Gallagher stands 5-foot-7, no taller than the average teenage girl. But as a grade-schooler, she looked down on most of her teammates. That’s where Dusti, her mother, guesses her natural pitching speed came from.

“She could hit it far and she could throw it far,” Dusti said. “She liked that aspect.”

Maya liked being the hardest thrower, too. She liked standing in the pitcher’s circle, ball in hand, crowd, teammates and opponents waiting for her.

She liked it so much that she started pitching lessons when she was around 10. Once, sometimes twice a week, she and Phil Quinn would meet in Rossville, Wamego or in Maya’s backyard — her dad, Paul, fashioned a baseball field complete with portable bases, a pitching rubber and a wooden backstop out of sand and oxy grass — to accentuate her talents.

Quinn started with the basics. Push off with your back leg, he told Maya. Finish your motion at shoulder-height. Don’t forget to snap your wrist.

To add speed, Maya pitched a 12-ounce ball (normal balls weigh between 6.25 and 7 ounces) from the mound, from second base and from the outfield. As hard as she could.

“It didn’t matter where it went,” Maya said. “It was all about speed.”

At 11, Maya’s focus shifted from speed to spin. She threw a changeup first, then a screwball. Before she threw a new pitch, she would mime its finger placement on Quinn’s “spinner,” a flat, circular softball that allowed Maya to practice grips more easily. Then she’d pitch to Quinn from a few feet in front of home plate. And once she went home, she’d rehearse the different wrist snaps for each pitch while watching television.

Before long, Quinn urged her to move back during their practice sessions. Back to the infield grass, halfway between the circle and home plate, and, eventually, to the rubber. She learned some pitches easier than others — she once stopped throwing her drop curve for a year and has since changed grips — but now she’s a softball-spinning savant.

While most star varsity pitchers blow fastballs past their opponents, Maya prefers her breaking pitches. According to her, she throws her curveball the most, then her rise, then her screwball (for lefties, in particular), then her changeup, then her drops and, last and least often, her fastball.

Thanks to the hours she spent snapping her wrist, refining grips and spinning heavy softballs, she can throw any pitch in any count.

“I took the time and energy to make sure my pitches went where I wanted them to go,” Maya said. “If you really want something, go the extra mile for it. Don’t stop focusing on it until you’ve got it.”

In tight jams, like the one Maya faced with Wamego leading 6-1 during the third inning of the state title game, her parents show their nerves. As Maya walked Andale’s Kylie Horsch to put runners on the corners with two outs, Dusti hunched her shoulders toward her neck. And Paul stood at the outfield fence, where he prefers to be alone with his nervous inner dialogue.

Maya, on the other hand, stepped toward the back of the circle, drew a breath and reminded herself: “You are better than these hitters. Just calm down. Pitch like you know how to pitch.”

The celebration didn’t last long, though. Three weeks later, Maya already is thinking about next season. While Meyer wonders how she can improve, Maya’s started a list: Her backdoor curveball needs work; she wants to slow down her changeup; and she hopes she can consistently throw her fastball 65 mph by next spring.

She has two personal pitching coaches to help with her list now — Cody Reynolds, who coaches at Topeka Hayden, and Lisa Carey-Martin, a former All-America first baseman at Oklahoma. She hopes they, along with another strong circuit of travel softball, can help prepare her for Wamego’s title defense.

The road to a repeat never is smooth, which is why Maya couldn’t afford to celebrate for too long. As her story illustrates, the best preparation for the Red Raiders’ future challenges is repetition.

“We’re just going to keep working,” Maya said. “We’ve got to keep the same energy that we had this year. We all are probably going to take these next two years and put everything we have into that”

Havercamp earned 10 wins for the Mustangs while maintaining a 1.34 earned run average and striking out a school-record 145 batters. She hit .342 while holding opponents to a .182 batting average. She finished with four home runs and 18 RBIs.

Goehring batted .517 from the Mustangs’ leadoff spot and set the singl-season school record for triples (10). She led the team with 45 hits while recording 22 RBIs and scoring 34 runs herself.

Billings, a third baseman, was an offensive force for the state-champion Lady Raiders. She hit. 500 and stole 25 bases in 2021.

Hoobler batted .440, notched 28 RBIs and stole 12 bases while playing second base for Wamego.

Kolterman batted .492 and reached base in half of her plate appearances as the Indians’ leadoff hitter. She finished the season with 21 runs scored and 13 RBIs.

Goos simultaneously served as the Indians’ ace pitcher and cleanup hitter. On the mound, she finished 5-4 with 88 strikeouts against just 23 walks. At the plate, she hit .450 (.486 OBP) with 16 runs scored and 13 RBIs.

Rignell led the Falcons in most offensive categories this spring, including batting average (.569), on-base percentage (.593) and slugging percentage (.765). She also started all 20 of the Falcons’ games at shortstop, where she committed just three errors.

Hafenstine batted .537 from shortstop while helping the Chargers to an 11-11 record.

LB Treshaun Hayward, 2019 MAC Defensive Player of the Year, is back in Arizona's plans