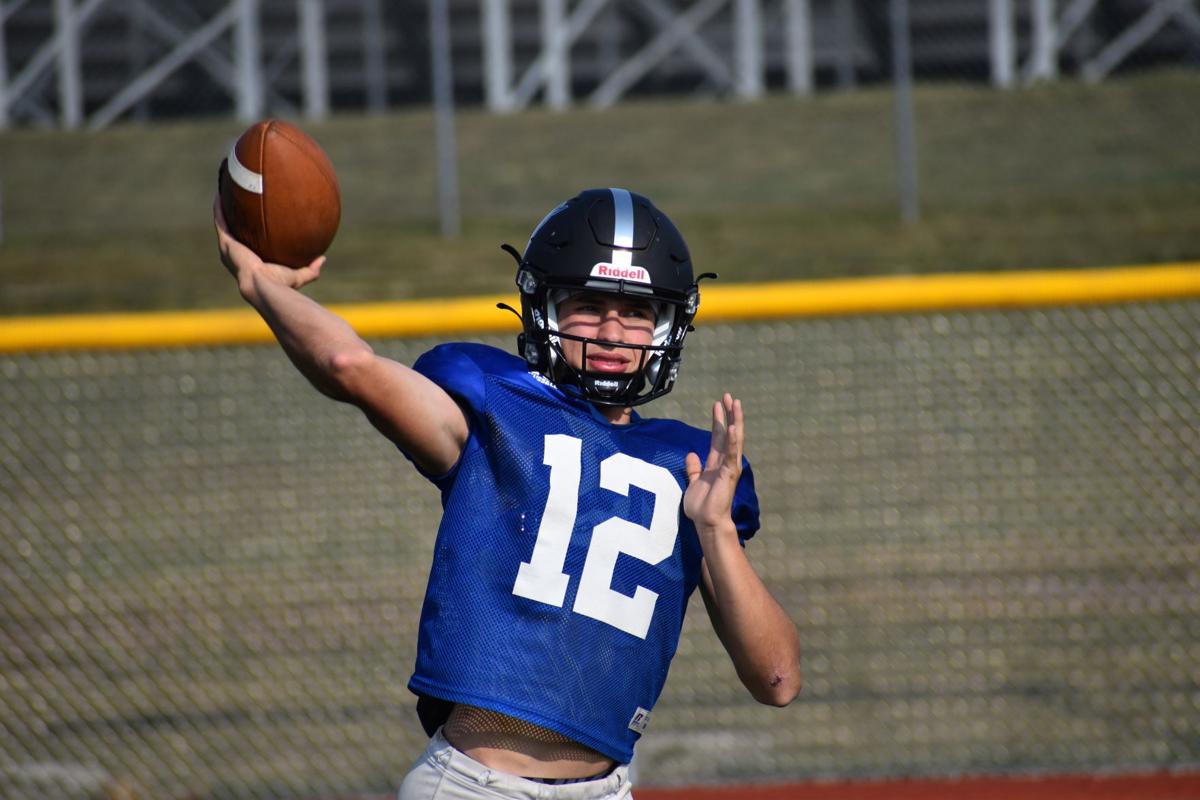 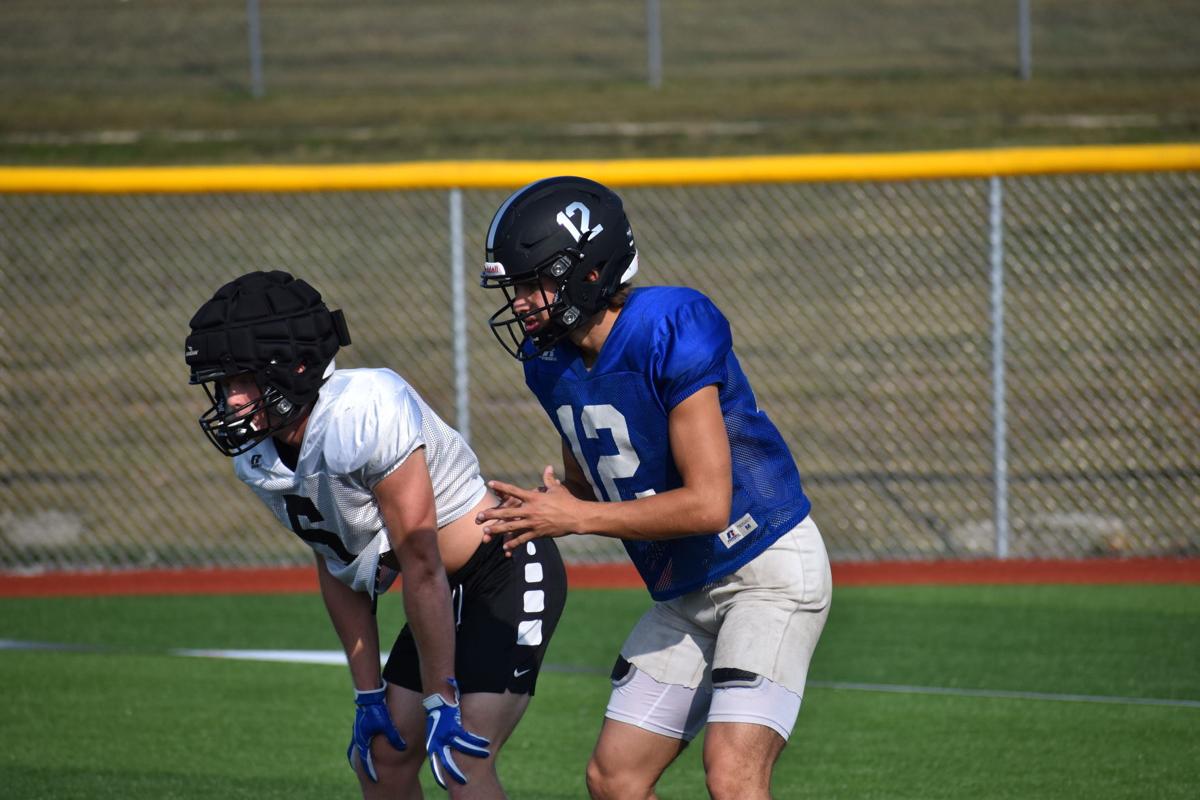 Rock Creek quarterback Charlie Killingsworth (12) lines up alongside teammate Brooks Whaley (6) during the team’s practice Monday in Flush. Killingsworth has gotten off to a fast start this season, putting up astronomical stats through the team’s first two games.

Rock Creek quarterback Charlie Killingsworth (12) lines up alongside teammate Brooks Whaley (6) during the team’s practice Monday in Flush. Killingsworth has gotten off to a fast start this season, putting up astronomical stats through the team’s first two games.

FLUSH — They call him “Cowboy” around these parts.

He’s a hard worker, they say. He’s tough as nails. He takes care of his business every time he’s out on the field.

He’s the “Cowboy,” and he’s earned the respect of his teammates. And if he hasn’t yet, he’s about to earn the respect of the rest of his competition as well.

He’s Charlie Killingswoth, and he’s the Rock Creek quarterback who’s accounted for close to 1,000 yards and 14 touchdowns through just two games this season.

“He’s one tough cowboy, and that’s the best description I have,” Rock Creek head coach Shane Sieben said. “Usually when you stereotype the quarterback, you think of the pretty boy who doesn’t want to get hit, and Charlie is the opposite.”

Killingsworth earned the nickname because he actually does have a little bit of cowboy in his background. He grew up on a farm, working with his dad to train horses and watch a herd of cattle that lives just north of Tuttle Creek Lake. He’ll even wear cowboy gear to film sessions if he’s coming off of work.

The work on the farm isn’t always fun. But, pushing through the tough days taught Killingsworth toughness and determination that now translates directly onto the football field.

“There’s some days where it’s not really that fun, but you have to do it anyway for the betterment of the animals and stuff like that,” Killingsworth said. “Really, I’d just say my parents have instilled that in me that if you work hard, you get things you want.”

Killingsworth has been through many tough days in his Rock Creek career. He’s started since he was a sophomore and is on his second coaching staff. Through his first two years as the team’s quarterback, the Mustangs are 3-15.

The quarterback went 0-9 in his sophomore season. His struggles were visible, as he completed under 50% of his passing attempts and threw just four touchdowns against 10 interceptions.

Sieben took over the program for Killingsworth’s junior season. The head coach knew his quarterback from the school’s baseball program and decided that despite Killingsworth’s previous struggles, he was ready for more on his plate.

Killingsworth was more successful in his new role, completing 53% of his passes for 1,462 yards and 14 touchdowns to eight interceptions. He also ran for 485 yards and seven touchdowns. The performance was good enough for an All-Flint Hills honorable mention accolade.

Still, Killingsworth wanted to do more. Despite the coronavirus limiting team training, he was determined to continue honing his craft over the summer.

A lot of that training was with teammate and best friend Brooks Whaley. The duo has played football together since elementary school, with Whaley being one of Killingsworth’s main targets at wide receiver when Killingsworth started playing quarterback his freshman year.

The pair’s work over the summer led both to believe big things were in store as they headed toward their senior years.

“I knew that was coming,” Whaley said. “Even at the end of last year, I knew it was coming. I was so excited for this year to start. I knew he was going to blow up.”

Just how big Killingsworth’s blowup would be came as a shock to everyone.

After Rock Creek’s season opener against Silver Lake was canceled, the Mustangs were squared off against Rossville, the top-ranked team in Class 2A, for a new opening game. On paper, the game should have been a blowout.

When the night was over, he’d passed for 491 yards and five touchdowns while running 35 times for 136 yards and four touchdowns. Despite his efforts, the Mustangs fell in heartbreaking fashion, losing by one point after a failed two-point conversion in the fourth quarter.

“I didn’t know I had that many touchdowns after the game,” Killingsworth said. “I went out and played my hardest and whatever came, came. It was a fun game, but I was still pretty ticked we didn’t get the win. It was definitely crazy.”

The performance took its toll. Killingsworth ran or passed the ball 79 times that night. He left the game battered, with bumps and bruises galore.

Part of that has to do with Killingsworth’s playing style. The toughness developed on the farm and over the two losing seasons has given the quarterback the courage not to back down from any hit the defense is prepared to give him.

“He wants to run people over,” Sieben said. “We give him a hard time about it and say he needs to go out of bounds every once in a while. He wants to deliver a blow.”

The punishment made the Rock Creek coaching staff wonder if it should give Killingsworth a few days off from practice. However, the quarterback didn’t give the staff an option, showing up ready to work toward a win for the first practice following the loss.

The practice paid off, as Rock Creek won 36-12 over Marysville. Though he tossed three interceptions, Killingsworth also threw for 237 yards and two touchdowns added 78 yards and three more scores on the ground.

The performances give Killingsworth and the rest of his team hope that the Mustangs finally might be on the right path following years of struggles. If the quarterback keeps up his numbers, wins won’t be the only thing the “Cowboy” earns.

“He’ll do whatever it takes to win,” Sieben said. “It gives our kids the most confidence in the world. ... He’s a tough kid, great leader and we love him to death.”

Arizona Stadium will soon be packed with cardboard cutouts; here's how to buy one