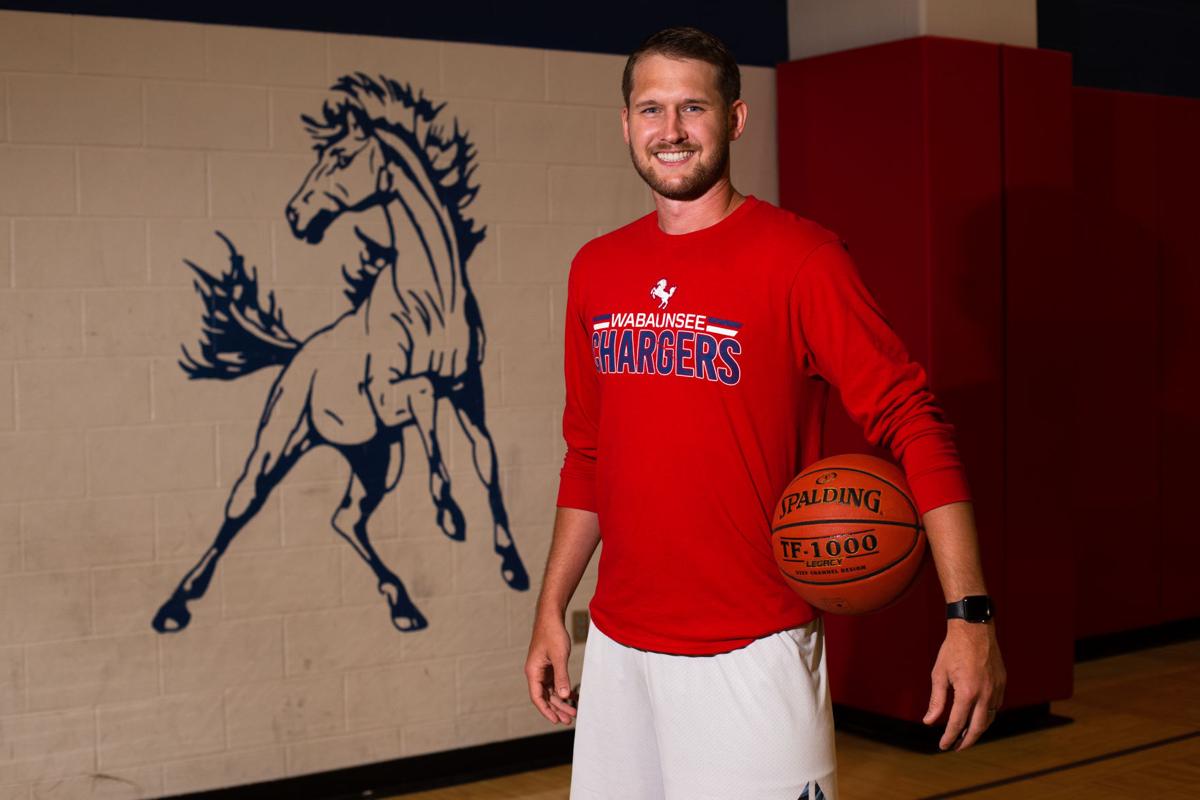 Wabaunsee boys basketball head coach Christian Ulsaker smiles in front of the Chargers’ logo at the school gym Wednesday afternoon. In his second season leading the team, Ulsaker helped the team rebound from a 1-10 start and advance to the state title game in March. 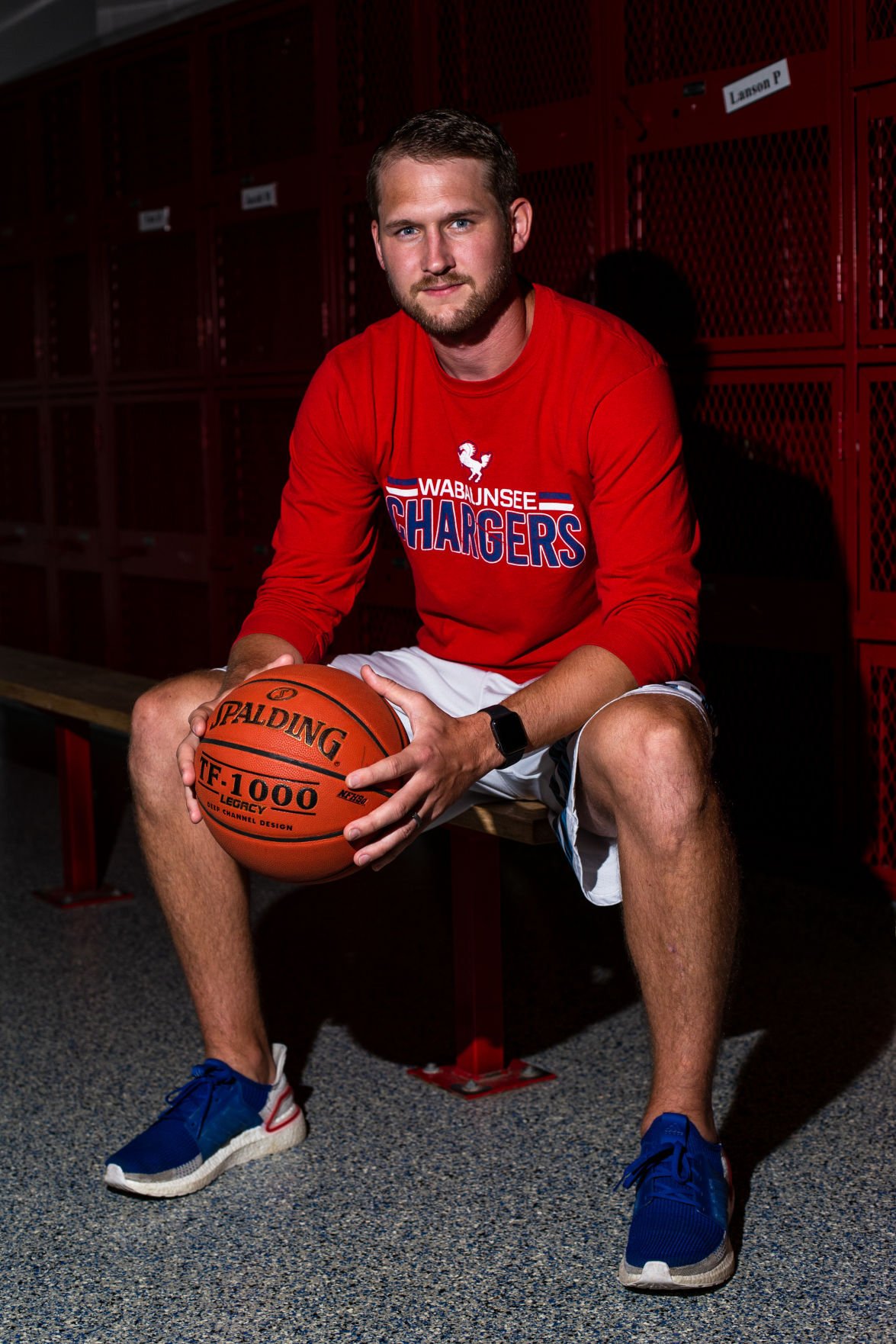 Wabaunsee boys basketball head coach Christian Ulsaker smiles in front of the Chargers’ logo at the school gym Wednesday afternoon. In his second season leading the team, Ulsaker helped the team rebound from a 1-10 start and advance to the state title game in March.

Chandler Ulsaker’s first birthday party had to be memorable. So back in April, one month before the occasion, his mother, Leota, was cycling through different themes.

“Monsters, Inc.” would please the kids. “Winnie the Pooh,” would produce the cutest photos. And “baby rave” might be the most fun for parents.

Since the day Chandler was born, Christian had been preparing for his son’s basketball future. Chandler left the hospital in a shirt that read, “born to play basketball with dad.” His first Easter basket contained his first ball. And the soundtrack to Chandler’s short life has been dominated by squeaking sneakers belonging to Christian’s Wabaunsee players and whoever happens to be playing on the Ulsakers’ television each night.

“It seems like we’re getting a new TV all the time,” Leota said.

Did this party have to be basketball-focused, too, she wondered? Chandler was already obsessed with “balls and basketballs” — Chrsitian jokes that “ball” was Chandler’s first word. He’d host plenty of hoops-themed parties in the future. So “We should just try to figure out if maybe there’s something else that he likes,” Leota told Christian. “Just this one year, let me pick what I think would be cute. Then you can have all the other years.”

Christian Ulsaker was born into basketball obsession. Growing up in McPherson, home of six players from the 1936 Olympic basketball team that won America’s first hoops gold medal, Christian remembers seeing a basket in every driveway. Longtime McPherson Sentinel sports editor Steve Sell once said that McPherson children are born with basketballs in their cribs. And Todd Ulsaker, Christian’s father, built his home with the game in mind.

Todd and his wife, Mary, decided to build a house near Turkey Creek Golf Course in 1994. They needed more space to support 2-year-old Christian and his older sister, Brette (younger sister Ally would join the picture three years later).

The backyard offered the children plenty of space to roam, but Todd worried about the driveway. Its slope was too steep to support a basketball court.

Pyle, who’d played under Phog Allen at Kansas, agreed. He instructed his men to pour concrete until they reached the edge of the house. Before long, the Ulsakers’ planted a Future Pro basketball goal into the ground.

Christian grew up watching the early-2000s Pistons (Todd grew up in Spring Arbor, Mich.). He molded his game after Richard “Rip” Hamilton’s and his on-court persona after Rasheed Wallace’s. Instead of talking trash, Chrsitian smiled during the game’s tensest moments, “which probably made people even more mad,” he said.

He joined the local YMCA league as a second-grader, the AAU circuit one year later and played in McPherson’s recreation leagues until he joined the school team in eighth grade. His height — Mary joked that her son’s growth spurt began “the minute he was born” — helped him stand out, but he dribbled and shot with guard-like precision, too.

By high school, Ulsaker was a two-sport star at McPherson. He played wide receiver in the fall and point-forward during the winter.

As a senior, he caught 67 passes for 1,146 yards and 11 touchdowns on turf to go with his 23.1 points, 8.5 rebounds, 3.7 assists and three steals per game inside the Bullpups’ gym. He led McPherson’s basketball team to a 24-1 record and won the Class 5A state basketball title. Their only loss: an 81-73 defeat against Perry Ellis-led Wichita Heights, which finished undefeated and won the Class 6A title. Christian scored 39 points and eventually graduated as the Bullpups’ all-time leading scorer.

The gaudy statistics led to more college offers. Christian considered his football offers seriously, too, but his choice became clear when his mother framed the decision in its proper perspective.

Weeks after winning his first state championship as a coach, Christian realized he needed a change. He’d enjoyed coaching at Hayden, but his substitute teaching gig didn’t fulfill his passions or his bank account.

Mary told him he needed a new job. He agreed.

Christian had chosen the coach’s life after a five-year run at Washburn University (Brette also played basketball for the Ichabods). It took a couple of weeks after his final season to realize his career was over, then to realize he wasn’t at peace with that.

“I guess I didn’t want the ride to end,” he said. “I enjoyed being around the sport way too much just to play summer league.”

Christian followed that passion to Washburn Rural’s bench, then Hayden’s. Then, after moving to Shawnee Heights, he rediscovered an passion that dated back further than basketball. Back to childhood visits at his grandparents’ dairy farm and rocking-chair chats with his Aunt Kathy, Mary’s older sister by 17 years.

Kathy was diagnosed with Down Syndrome at birth, but that never stopped her from performing her share of farmland chores. Mary remembers Kathy, who died in 2012, cleaning barns, feeding calves and washing clothes on the farm.

Christian admired Kathy’s work ethic and enjoyed her unique viewpoints. She, unlike most people, rarely asked him about sports. And she assigned nicknames to all her friends and family members — Mary’s was “Coogoo,” a nod to the infantile dialect she spoke in as a baby — which tickled Christian’s sense of humor.

“I loved the conversations with her,” Christian said. “When you talk to somebody with Down syndrome or special needs compared to just an average Joe, it’s always humbling.”

In high school, Christian expanded his reach into the special needs community through a program called “Pup Pals.” Each weekday, during the last hour of class, Christian visited McPherson’s special needs class and discussed the school day with each student. One of the students could only communicate through a tape recorder. Without many young voices to choose from, the teacher asked Christian to voice the pre-recorded greetings.

“Without me even knowing, that was what I wanted to do,” said Christian, who still teaches special education at Wabaunsee. “Through (special education) programs at McPherson, growing up with my Aunt Kathy and just having a strong connection with that, it helped me be a better teacher earlier than most people would probably be.”

Midway through the 2020-21 season, Christian grabbed a blank sheet of paper, pushed his retractable black pen into action and began drawing. First, a rectangle to represent the free-throw lane. Then the parabola-shaped 3-point line. He drew X’s, circles and bullet points explaining each symbol’s duties on a particular play.

“If you can’t read my handwriting, ask me,” Christian told his players. “I’ve got that scribble handwriting.”

After assistant coaching stints at Washburn Rural, Hayden and Shawnee Heights, Wabaunsee hired Christian to teach special education and change the boys’ basketball culture in 2019. The Chargers had posted two winning seasons over the previous 10 years, which did not inspire the same hoops passion Christian was raised on.

“They’re just wasn’t a lot of connection in any sport for (Wabaunsee) men,” Chistian said. “The women alway had success, but the boys’ programs needed that confidence. They needed that winning expectation.”

After leading Wabaunsee to a 9-12 finish in his first season, Christian felt bullish about his 2020-21 group. That is, until injuries and the coronavirus wiped out his roster.

Braden Meseke missed three games with an ankle injury; Tyler Lohmeyer missed three due to quarantine. Then the Chargers’ entire starting lineup missed the Royal Valley tournament due to COVID-19 protocols, leaving Chrisitan no choice but to play his junior-varsity players throughout the tournament.

The Chargers started 1-10; they lost eight straight games from Dec. 11 to Jan 23. Christian understood that the Chargers were short-handed, but he refused to accept his lack of control over their on-court product.

So he traded the dribble-drive offense he’d grown up running for a variation of the Princeton attack. Wabaunsee’s new offense emphasized off-ball movement over 1-on-1 breakdowns. It encouraged the Chargers to play at a more deliberate pace. And as Wabaunsee returned to full strength, it worked.

Tyler Lohmeyer found confidence in the sharpshooting, high post-passing role Christian’s new offense created for him. Braden Meseke thrived after switching from off-guard to point guard. And Christian took advantage of the empty gyms across the state during his scouting sessions. He could hear coaches’ play calls on tape, which helped him devise the defenses to counter them.

Now when the Chargers break every huddle with “(Manhattan) on three” — Bramlage Coliseum hosts the Class 2A state tournament — they know what they’re talking about.

“It gives them a sense of, ‘We’ve been there,’” Christian said. “it’s kind of addicting, getting to the state championship. I think they’re itching for more.”

Leota settled on a dinosaur party.

Christian inflated dozens of blue, green and teal balloons. The Ulsakers served a “forrest-y looking” cake. Christian pushed Chandler around in his dinosaur truck (And yes, Leota threw glow sticks in the bathtub for her baby’s first rave).

The family gifted Chandler his first basketball hoop. He’s already dunking on it, and his height chart, which shows he’s taller than 97 percent of 14-month-olds, suggests he has a future in it. He’ll hear more squeaky sneakers this winter.

Christian visited his childhood home for the final time during the Fourth of July.

Mary and Todd, now empty-nesters, are down-sizing to Topeka. Last weekend marked the end of “The McPherson Hacienda,” as Mary called it.

They’re still debating whether to take the Future Pro basketball goal with them. But even if they leave it behind, they’ll buy a new one (Christian thinks they’re going to build a shed to house their next court). The family still plays when the kids come home.

For as long as the Ulsakers gather, they’ll shoot baskets. They’ll need a sturdy goal.

And they’ll need enough room for a 3-point line.

“We’re not idle people,” Christian said. “If we’re going to have a conversation, we might as well do it while we’re shooting hoops.”