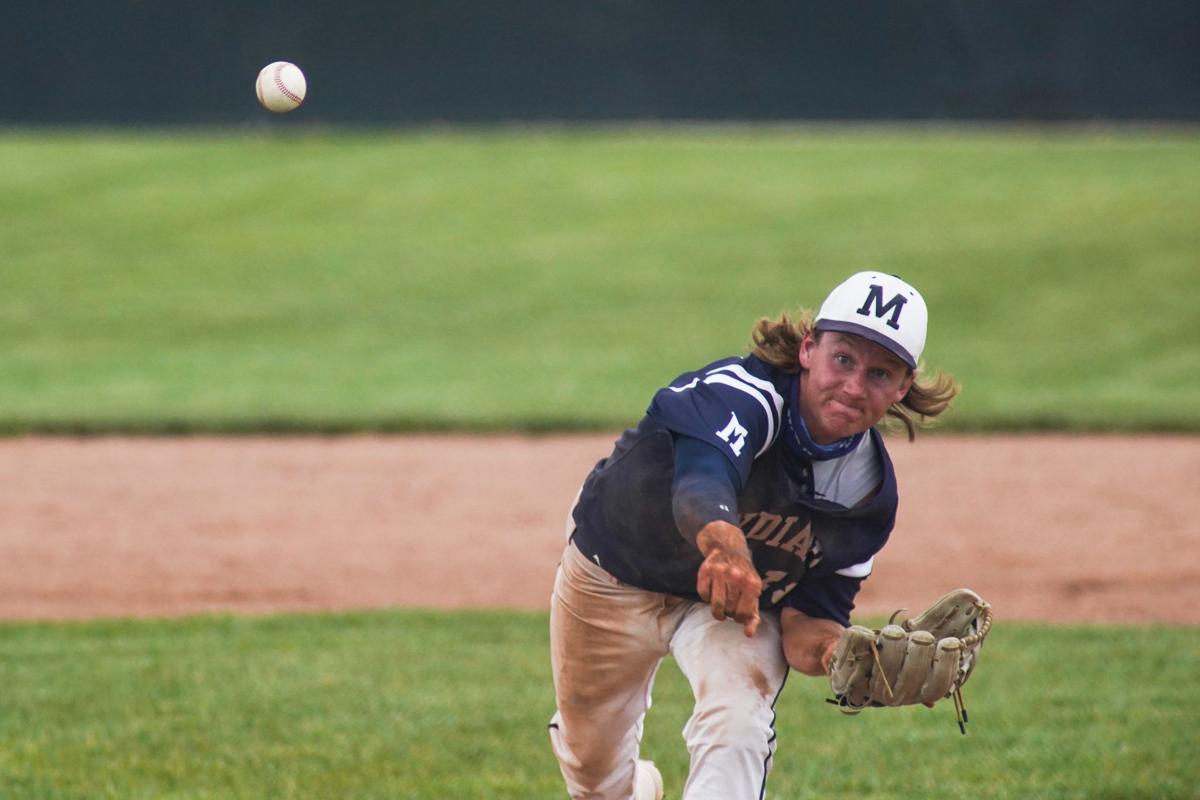 Manhattan senior Dayne Aschenbrenner (18) delivers a pitch during a game against Hayden last month. Aschenbrenner is wrapping up his career as an MHS athlete at this week’s Class 6A state baseball tournament, which began Thursday in Fort Scott. (Check themercury.com for updates.) 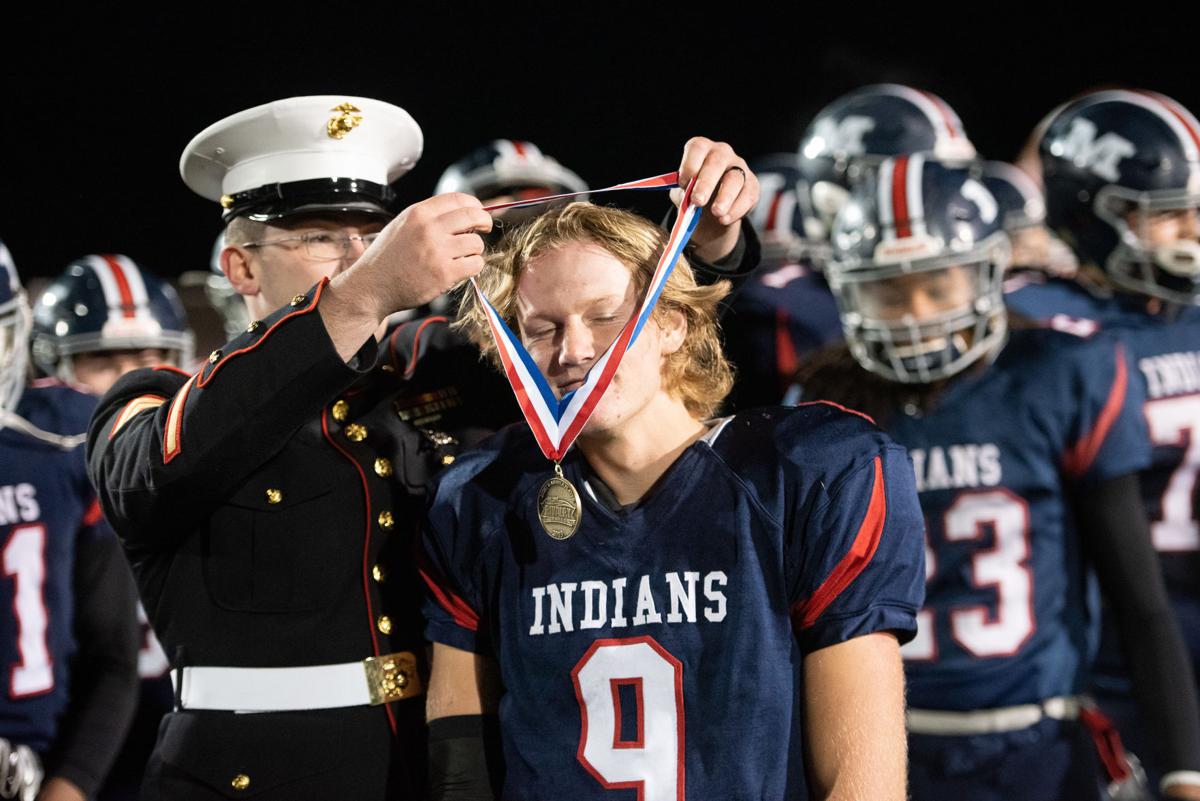 Dayne Aschenbrenner is awarded a medal for his MVP performance in Manhattans 31-28 victory over Junction City in October 2019.

Manhattan senior Dayne Aschenbrenner (18) delivers a pitch during a game against Hayden last month. Aschenbrenner is wrapping up his career as an MHS athlete at this week’s Class 6A state baseball tournament, which began Thursday in Fort Scott. (Check themercury.com for updates.)

Dayne Aschenbrenner is awarded a medal for his MVP performance in Manhattans 31-28 victory over Junction City in October 2019.

The familiar sounds of catch prepare Dayne Aschenbrenner for Manhattan’s baseball practice Tuesday. He throws with outfielder Brett Wilcoxson — always Wilcoxson, even before games where Aschenbrenner is the starting pitcher — as his light brown shoulder-length locks flutter in the ever-present Kansas wind.

At this point in the season, each Wilcoxson warm-up session could be the last. After emerging from their regional bracket, the Indians play Olathe West in Thursday’s state quarterfinal. A win not only continues their quest for a title, but guarantees them two games on Friday. (A semifinal followed by either the final or the consolation game).

That’s two more chances for Aschenbrenner to call himself a student-athlete. He announced his impending retirement last month, when he accepted a full ride to the University of Memphis’ ROTC program. He intends to major in math.

Division III Pomona College in Claremont, Calif., among several other schools, wanted Aschenbrenner to play football. And his father, Steve, has heard through “back channels” that Aschenbrenner could catch for a Division-I baseball program.

But no coach could erase student debt concerns. Division III schools can’t offer athletic scholarships, and baseball programs rarely offer big money to recruits, even if they have a sling-shot arm, outfielder speed and a bat that can hit to all fields like Aschenbrenner.

The financial sacrifice isn’t worth the physical one. Aschnebrenner is tired of “banging into guys” in shoulder pads, and “getting hit with the ball and squatting” doesn’t appeal to him anymore, either.

After a lifetime spent loving both, Manhattan baseball’s only three-year starter has made his peace: whether the Indians win a state title or lose in Thursday’s quarterfinal, this is it.

“It definitely gives you a sense of urgency,” Aschenbrenner said. “All my best memories came out here with my teammates. I’m not trying to think about (my last game) right now. We just want to win.”

When baseball’s sounds still were novel, Dayne listened intently. With Denny Matthews, the Royals’ longtime radio announcer, providing the home team’s soundtrack through an “old, crappy radio,” Dayne and Steve played catch in the backyard every summer evening until dark.

If Matthews’ timbre perked to describe a highlight, father and son would run to the south side of the Aschenbrenner’s wooden deck and sneak a glimpse of their television through the window. After the replay, they’d return to catch, to Matthews and the events of each other’s days.

“It’s magical, man,” Steve said. “‘Field of Dreams’ is about playing catch with your dad. We just played in the backyard all the time.”

Dayne inherited baseball from his mother, Stacy, who often turned Dayne and Steve’s short-toss into a full-fledged scrimmage. Stacy played third base at Derby, and she swung like it, too.

During one intrafamily scrimmage, Stacy hit a line drive so hard that Dayne fell backward after squeezing the ball in his glove.

“I just couldn’t hold back the swing, I guess,” Stacy said.

Stacy signed up Dayne for his first tee ball season when he was 4 years old. He played in St. George because the Manhattan League didn’t let kids play until they finished kindergarten, “and I wasn’t going to wait that long,” Stacy said.

Dayne designated himself a catcher early, even though tee ball didn’t require one. With no umpire behind him and no pitch coming, he’d squat behind the batter’s box wearing a black batter’s helmet and resting his throwing hand behind his glove’s webbing, ready to squeeze. He liked catchers because they had the ball on every play.

He started travel ball at 7, and he started pitching soon after. He threw fast — too fast, if you asked his teammates and coaches. They thought Dayne’s focus on speed explained his bouts of wildness.

But where they saw overthrowing, Dayne simply threw. He never worried about speed; he only generated it.

“I was just throwing the ball hard,” Dayne said. “I was never even that wild, but everyone that throws hard gets that rap.”

He hit hard, too, and from both sides. Dayne started switch hitting early on, and as he grew older, he looked less and less like the stereotypical catcher. By 11, he’d dropped his baby weight and became one of the faster players on his team. He batted either leadoff or fourth (also known as “second leadoff”) and became a petty basepath thief.

When he watched the Royals on television, he paid close attention to the catchers on each team, but he never saw his future as similar. In Stacy’s 22 years as a teacher, she’d heard countless kids aim their bats toward the Major Leagues. But never her son.

“He wouldn’t talk about it,” Stacy said. “He wouldn’t say that he was going to be the next Mike Moustakas or whatever. He just seemed to have an understanding of what he was capable of.”

Football was dad’s sport. A former safety at Dodge City Community College and a current assistant coach at Manhattan, Steve took Dayne to his first Kansas State football game before Dayne could talk. And though Dayne’s earliest memory is the Wildcats’ 2008 loss to Kansas, the atmosphere inspired him. He went back, and good memories replaced bad. He’d never seen so many people.

Soon, Dayne played in his first flag football league, and he signed up for tackle ball as a second-grader. A self-described “heavy” child, Dayne cycled through blocking positions at first: center, then tight end, then fullback.

“It was the worst,” Dayne said. “In the backfield, whether you’re the quarterback or the running back, sometimes you can just fake; you don’t have to hit anybody. (As a lineman), even if you block the person you’re supposed to and you knock them to the ground, you’ve got to go block somebody else.”

As Dayne thinned down, coaches noticed his speed and arm strength. They moved him to quarterback in seventh grade, and after losing just two middle-school games in two seasons, he stayed there.

When he arrived at Manhattan High, however, he still was throwing the football from baseball’s third-quarter arm slot. Head football coach Joe Schartz taught him to throw from his ear, which simplified Dayne’s motion and quickened his release.

That adjustment, coupled with a few summers in the weight room, gave Aschenbrenner the one tool he’d never mastered: control. He said his simplified throwing motion helped him throw footballs and baseballs more accurately. As a freshman, Aschenbrenner helped the Indians’ baseball team finish second in its regional. As a sophomore, he led the football team to a regional title.

He grabbed college coaches’ attention despite losing his junior season to the coronavirus. He heard from schools in Virginia and across the Northeast. But Pomona, with 1,600 students to its name, stood out from the rest.

Located about 30 miles east of Los Angeles, the campus felt like “a vacation” when the Aschenbrenners visited in August. The academics were so strong that Dayne, an honors student at Manhattan, didn’t think he’d be accepted without the football team’s support, and the Sagehens finished the 2019 season 5-4.

When the family left California, Stacy thought her son was coming back.

“It was pretty close,” Stacy said. “He was gung-ho about football when we visited. I thought that was the way we were headed.”

The mitts stay in their bags these days. The Aschenbrenners haven’t played baseball in the backyard since the preseason, and Steve isn’t sure when the next game will be.

Dayne throws too hard for his dad anymore, Steve said. And neither Dayne nor his younger brother Bodyn, who constantly cycle between just pitched and about to pitch, can’t spoil their arms before their next start.

The family bonds in the living room now, in front of the television. Baseball plays during the summer: college, pro — any kind except the Royals, really (the Aschenbrenners, like many Kansas residents, curse MLB’s blackout policies). They don’t miss a Wildcats or Chiefs game in the fall (even if Bodyn roots against the Chiefs to bother his brother). in the fall.

Recently, Dayne and Steve have been watching old Hudl tape from Dayne’s football days. The 2019 regional title against Lawrence Free State inspires nostalgia. Dayne fumbles on what’s supposed to be a jet sweep on the second play of the game. He draws a roughing-the-punter penalty on “fourth and a country mile,” giving the Indians a first down.

“I think that’s my best play of the game,” Dayne jokes to Steve, ignoring the fact that he totaled 319 yards and two touchdowns in the win.

The fun didn’t have to stop after Manhattan. Dayne seriously considered playing football at Pomona. But football batters the body, and living on vacation would “feel weird,” according to Dayne.

Sports dominated his childhood, his adolescence and his initial transition into adulthood. But Memphis made too much sense — financially, physically, futuristically.

The ROTC scholarship is the perfect starter kit for Aschenbrenner’s 10-ish-year plan: four years undergrad, five years in the service (required by his program), and two-to-four years of law school after that.

Which one? “Whatever’s in season,” he said, which means next spring, when Dayne returns to campus from spring break, he’ll pick a new throwing partner.

“Oh, for sure,” Dayne said. “You can’t be an American and leave your ball glove at home.”

The team that 'can handle the stress' might be the difference at Class 6A tourney, MHS head baseball coach Don Hess says

What does Richard Torres' commitment mean for the Huskers? Here are 3 observations