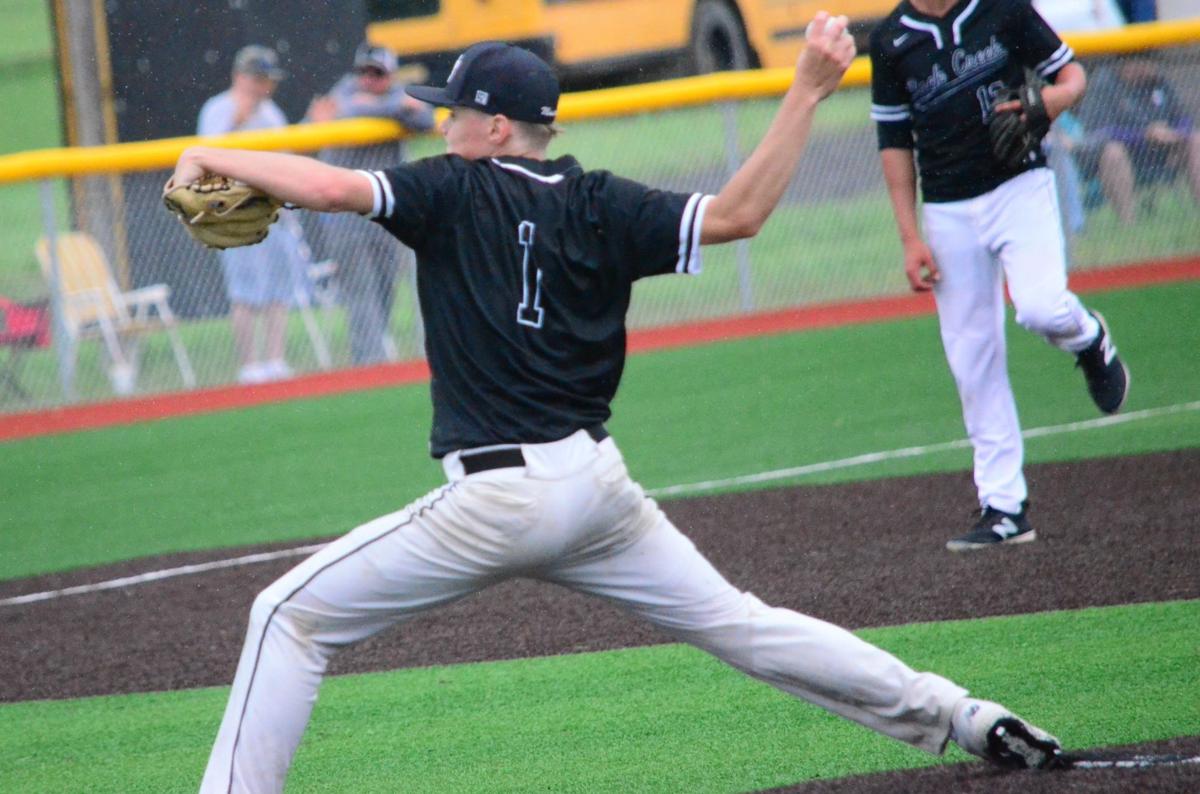 Rock Creek senior Tanner Christensen throws a pitch during the team’s regional semifinal win over Silver Lake on Wednesday. Christensen closed that game and the final against Nemaha Central as the Mustangs captured their seventh straight regional championship. 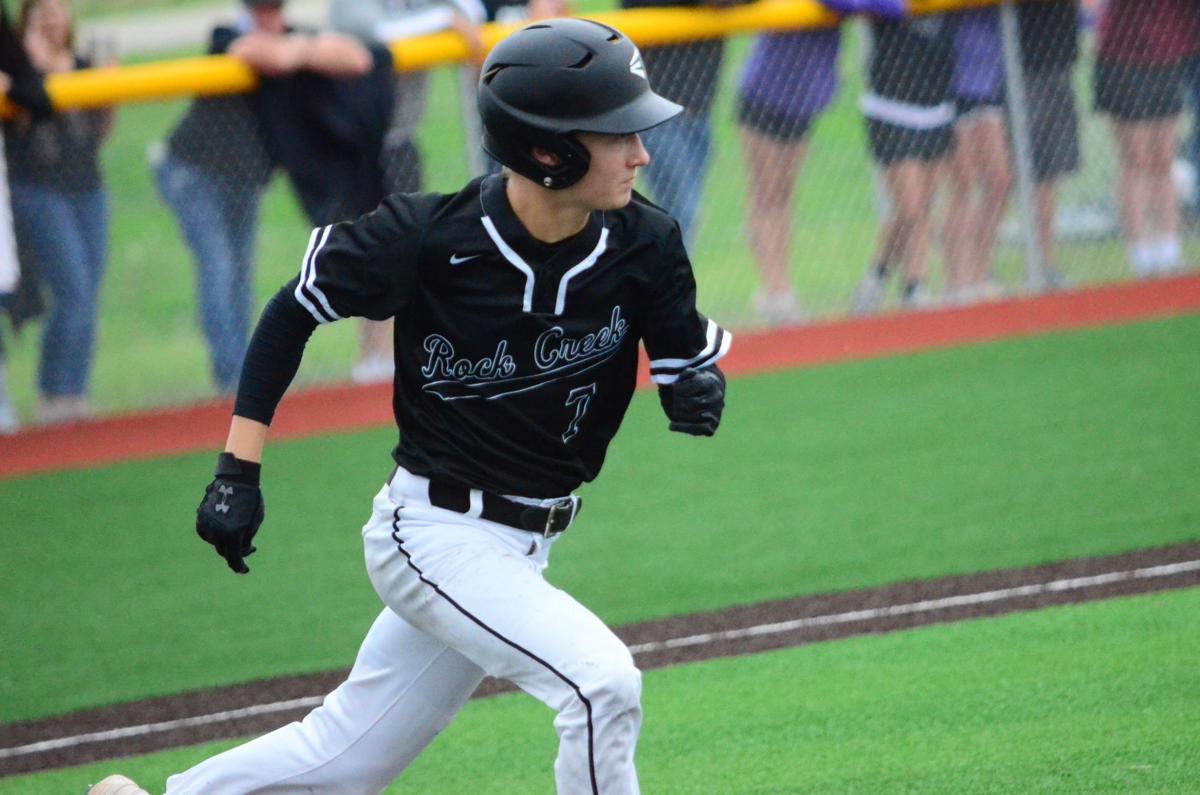 Rock Creek sophomore Ethan Burgess runs toward first base during the team’s regional semifinal win over Silver Lake on Wednesday. The Mustangs won both their games Wednesday to captured their seventh consecutive regional title. With the victories, they clinched a spot in next week’s Class 3A tournament.

Rock Creek senior Tanner Christensen throws a pitch during the team’s regional semifinal win over Silver Lake on Wednesday. Christensen closed that game and the final against Nemaha Central as the Mustangs captured their seventh straight regional championship.

Rock Creek sophomore Ethan Burgess runs toward first base during the team’s regional semifinal win over Silver Lake on Wednesday. The Mustangs won both their games Wednesday to captured their seventh consecutive regional title. With the victories, they clinched a spot in next week’s Class 3A tournament.

ST. GEORGE — Rock Creek senior Tanner Christensen wanted the ball in his hand when it mattered.

After the Mustangs took down Silver Lake 5-3 in a regional semifinal game Wednesday, Christensen, who had just pitched four scoreless innings in relief of senior starter Brooks Whaley was given a choice by head coach Shane Sieben: Would Christensen want to start the championship game versus top-seeded Nemaha Central? Or elect to once again come out of the bullpen to close the game?

For Christensen, it was simple.

Give me the ball when it matters.

“I just love closing out games because I know I’m that dude and I can get it done for us,” Christensen said. “I just have big confidence in myself.”

The Thunder reached base with their first batter in the bottom of the sixth on a walk, and after a strong five-inning start from freshman Daegen Vinduska, Sieben put the game in Christensen’s hands once more.

“He relishes that spot,” Sieben said. “He did what Tanner does. He just attacks.”

The Thunder did not touch first base for the remainder of the game, as Christensen sliced and diced his way through five batters until he scooped up a lightly-hit ball between home and first base and threw it to first, ending the inning and the game, giving the Mustangs a 6-2 regional championship win.

But just because Rock Creek had won the six regionals in a row does not mean the seventh came easy.

In fact, Sieben couldn’t remember a regional so jam-packed with state-level talent.

“Sometimes you get lucky with a regional and sometimes you don’t,” Sieben said. “You’re kind of at the mercy of KSHSAA. When it came out, I was getting texts from every coach in the region about how our regional was ridiculous. Legitimately, six of the top teams in the state. We opened up with the two-time defending state champs in Sabetha and we knocked them off. And then we played the No. 2 team in the state (Silver Lake) and knocked them off. And then Nemaha Central is ranked in the top 10. The path was the toughest I’ve ever seen, but to our kids’ credit, they just believed.”

Add that on to the challenges of recovering from a canceled season in 2020 and working with coronavirus restrictions throughout the year, and one starts to understand how much the Mustangs overcame to get to the point where they dogpiled on the first base line to celebrate their latest regional crown.

“These kids have been through a lot,” Sieben said. “Everyone has in the past year. We just talked about playing together and loving each other and just enjoying the moment. And they did — they enjoyed the moment and had a blast.”

In 2015, Rock Creek won its first — and at least to this point, only — baseball state title. Now, with a varsity roster that features 12 seniors, the Mustangs have another opportunity.

“They’re winners,” Sieben said. “That’s the biggest thing I say about this senior class: They’ve won, and they’ve won at everything — football, basketball, we have some wrestlers in there. They’re just winners. This is a special senior class.”

The Class 3A state tournament will be held in Manhattan at Tointon Family Stadium and begins with quarterfinal games May 27.

Rock Creek played at Silver Lake during the first week of May; the Eagles swept the two-game set by scores of 8-2 and 7-6. Sieben knew that the Mustangs did not play up to their potential during that series and was thrilled his team proved that in their 5-3 win in the regional semifinal Wednesday.

“We made some big plays today,” Sieben said. “We weren’t at our best when we played at their place. We dropped I don’t know how many fly balls, probably seven. We knew that we needed to clean it up and we knew they were a great team. Hat’s off to Coach Seele and Silver Lake. They’re extremely talented. We knew they were going to give us their best shot and they got ours. It was a heck of a ballgame.”

After two scoreless innings, the Mustangs broke out for three runs in the top of the third, which started with a Silver Lake error that advanced sophomore Maddox Ibarra to second. Whaley singled after that, which moved Ibarra to third and, after a strikeout, gave the Eagles two outs in the inning.

Rock Creek senior Mason Sturdy then stepped up to the plate and bombed a ball to center field. He nearly had a three-run home run, but instead settled for a ground-rule double, scoring Ibarra and Maddox. Junior Zac Becker singled to center field on the next at-bat and scored Sturdy before Ben Wick grounded out to end the inning.

Silver Lake (16-5) responded with a three-run inning in the bottom of the third, but the Mustangs jumped in front again in the top of the fourth, which started with another Silver Lake error and ended with two runs off a pair of fielder’s choice plays.

“We put pressure on them, and that was a big thing with the wet field and the rain,” Sieben said. “We just stayed on top of the ball and made them make plays. We feel like if we make a team do that for seven innings, eventually they’re going to crack.”

In the bottom of the fourth, Christensen replaced Whaley on the mound. Christensen finished the final four innings, allowing just two hits and a walk with one strikeout.

“(Whaley) was hurting after having to come in and close things out for us on Monday versus Sabetha,” Sieben said. “He just had too many walks and was really struggling with his fastball tonight. We knew what Tanner was going to give us: He was going to throw strikes and give us a chance, and we were going to have to make plays defensively. To his credit, he filled it up and finally found his breaking ball late, and our defense did a great job of making play after play.”

The championship game started much like the semifinal, with the Mustangs grabbing a 3-0 lead in the top of the second.

The Thunder (18-4) cut its deficit to 3-2 in the bottom of the fourth, but the Mustangs shut the door after that. After Vinduska’s five strong innings on the mound, he handed off the ball to Christensen.

“We talked to Daegen and told him that he didn’t need to do too much. (We said), ‘Just throw strikes and let your defense work,’” Sieben said. “And he was fantastic.”

Sturdy tripled on a deep shot to center field and Becker followed up with a triple of his own to push the Mustang lead to 4-2 in the top of the fifth to chase Nemaha’s starter.

Rock Creek added two more insurance runs off a single and a steal of home in the top of the seventh before Christensen sealed the victory with his arm.