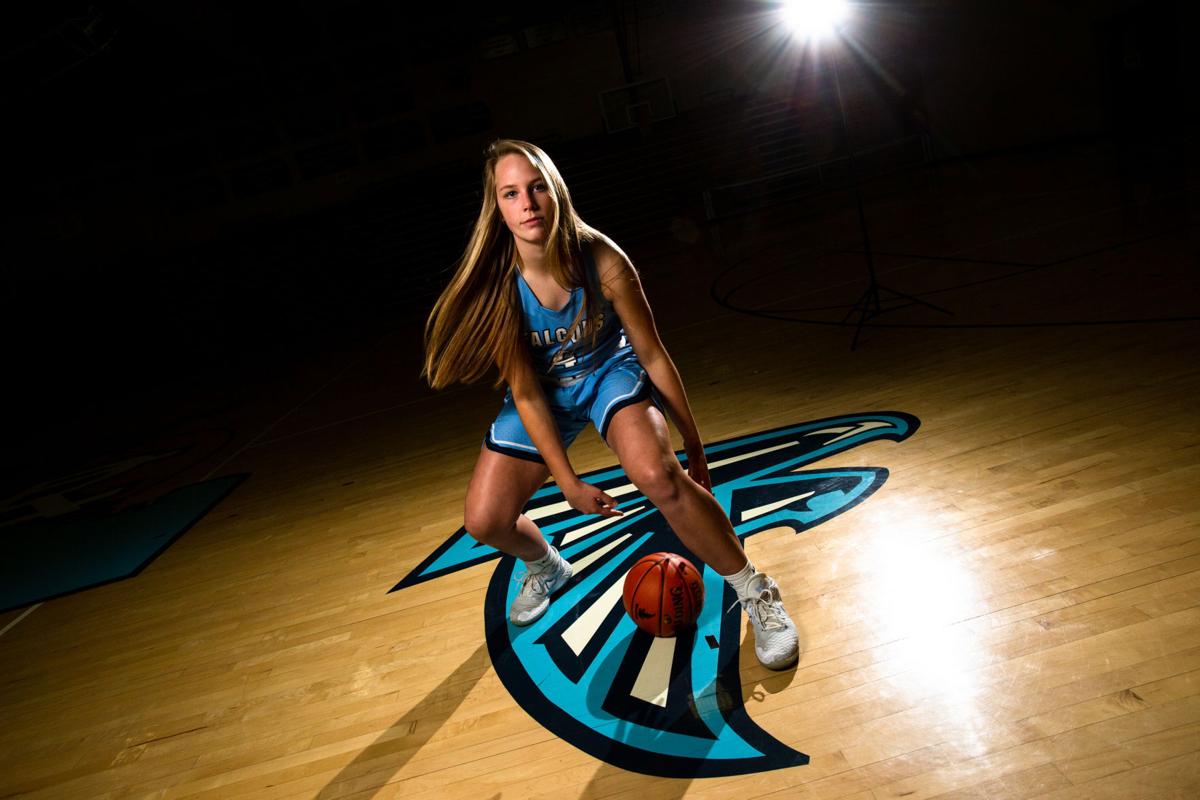 Riley County's Jessi Brummett dribbles a basketball in the school gym. Brummett is The Mercury's Flint Hills winter player of the year. 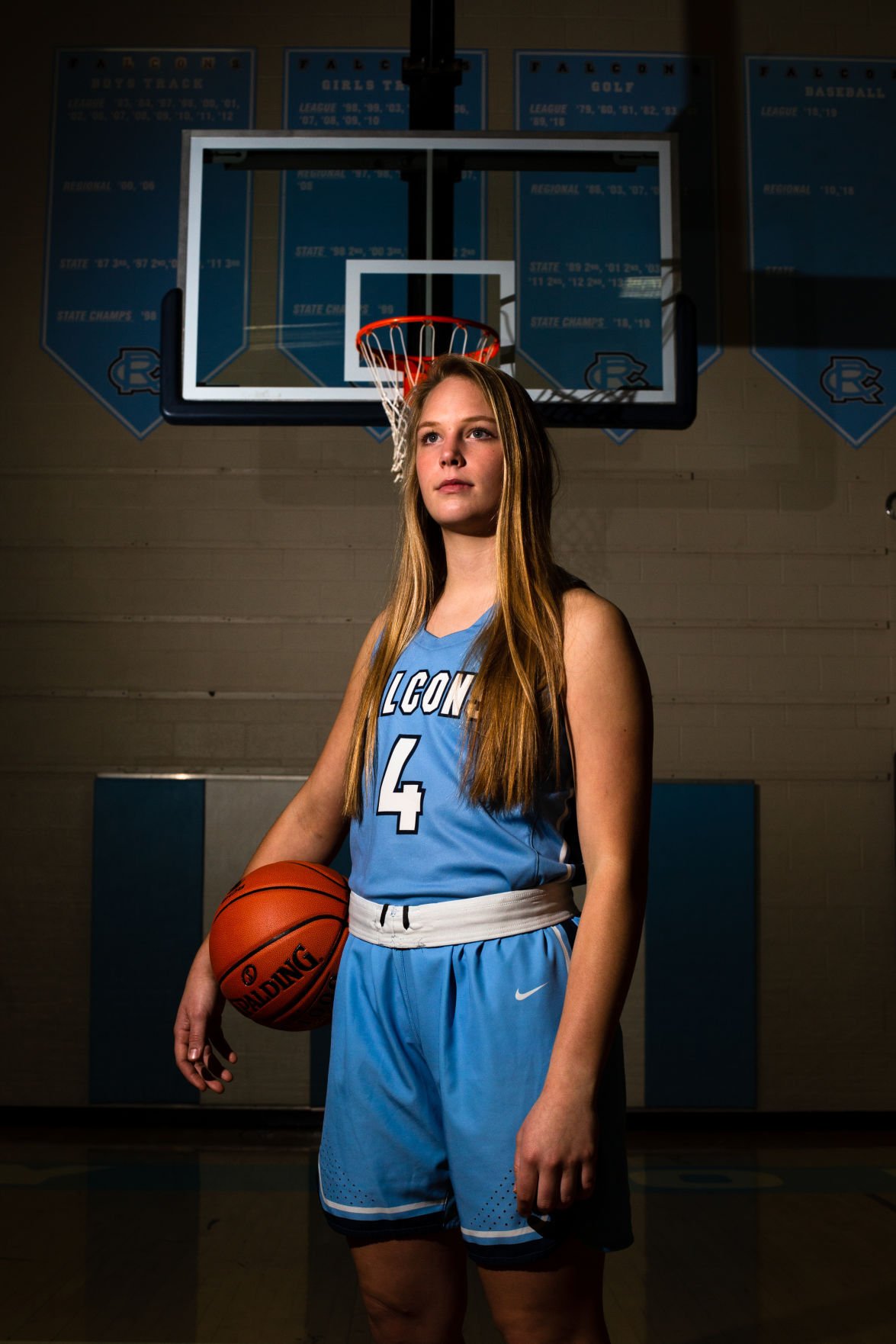 Riley County’s Jessi Brummett holds a basketball in the school gym. Brummett is The Mercury’s Flint Hills winter player of the year.

Riley County's Jessi Brummett dribbles a basketball in the school gym. Brummett is The Mercury's Flint Hills winter player of the year.

Riley County’s Jessi Brummett holds a basketball in the school gym. Brummett is The Mercury’s Flint Hills winter player of the year.

“I need you in and out,” Oliver told her. “You’re a good shooter. I want you outside.”

Outside meant the 3-point line, and Brummett didn’t know how to feel. She’d developed her shooting stroke while growing up a point guard, but whenever she caught a pass behind the 3-point arch, her body hesitated; her brain took over.

“Oh gosh,” Brummett remembers thinking, “I’ve got to make this.”

One year later, Brummett has much simpler thoughts when she catches a pass on the perimeter. First “catch,” then “shoot.” That’s it.

That’s the simple formula that helped her lead the Falcons in scoring (14.5 points per game). She also led them in assists (3.1 per game) and finished second in rebounding (six per game), and — most notably — 3-pointers made (20).

Those numbers earned Brummett first-team honors in the Mid-East League and propelled Oliver to call her one of the best players in Class 3A.

For her efforts, The Mercury selected Brummett as its All-Flint Hills Player of the Year in girls’ basketball.

It’s all because she blocked out uncertainty and kept shooting.

“I wasn’t very confident till this year,” Brummett said. “But my coaches kept me confident and kept telling me to keep shooting. So I just kept shooting.”

Brummett’s shooting struggles began as a mechanical issue. Namely: She didn’t keep her wrist snapped after releasing her 3-point jumpers, which meant her shots lacked backspin.

The only solution: shoot more. Brummett spent last summer playing for the Kansas Twisters, a Wichita-based team that competes on the Mid-America Youth Basketball circuit. She added 3-pointers to her daily routine, and, gradually, she silenced her internal dialogue. She stopped thinking so much. She started making 3-pointers.

“It felt really good,” Brummett said. “When your teammates are confident in you, it builds everybody up.”

Thanks to Brummett’s 3-point stroke, the Falcons’ spacing improved, which forced defenders to cover more ground. Brummett’s ball-handling, which she’d spent the 2019 offseason perfecting, shined brightest when driving past defenders who played her too closely. Once she dribbled past them, she used her court vision to punish defenders that helped off the Falcons’ other shooters.

At times, she didn’t even need the ball to make a difference. At 5-foot-11, Brummett often matched up against opponents’ tallest defenders. Thanks to her improved jump shot, those defenders spent more time guarding her at the 3-point line than they spent protecting the rim.

“She became a great inside-outside weapon,” Oliver said. “Our team got better when we were able to use her on the perimeter more. It pulled people from the basket; it was a tough matchup.”

Brummett’s versatility drew attention from the coaches at Cloud County Community College, where she’ll play basketball next season. The next step in her game, she said, is adding speed.

Running track this spring will help, but after that, she’ll be back in a gym, lifting weights and running laps.

After beginning her college career at Cloud, Brummett hopes to join a four-year basketball program. But no matter what, she won’t leave the game behind. She plans to coach one day, to inspire future players the way her coaches inspired her.

She wants to be a happy coach, an understanding coach. Kind of like Oliver, she said, because she thinks he’s a great coach.

She learned so much from Oliver: defensive schemes, reading misses off the rim, and, of course, how to extend her range.

If one of Brummett’s players ever struggles with shooting confidence, she’ll know exactly what to tell them.

“Just shoot, honestly,” Brummett said. “The best thing you can do to become a good shooter is shoot.”

Averaged 14 points and 10 rebounds per game.

Averaged 12.6 points and 7 rebounds per game.

Averaged 10 points and 2 steals per game.

Averaged 9.5 points and 3 assists per game.

Greg Hansen: 20 things you need to know about Arizona's history of head coaches

The Huskers scrimmaged on Wednesday. Defense gets the edge and offense gets a 'wake-up call'