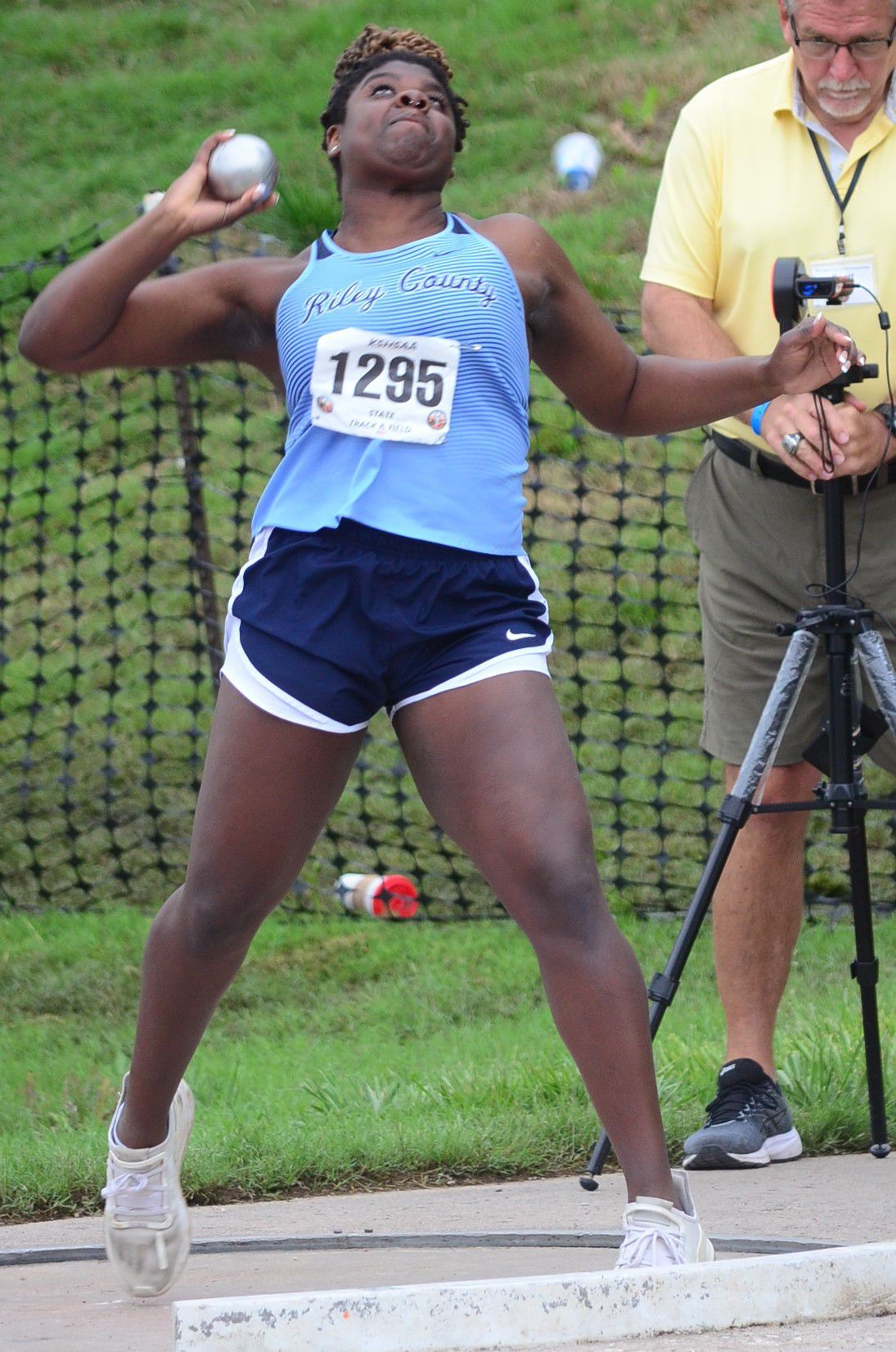 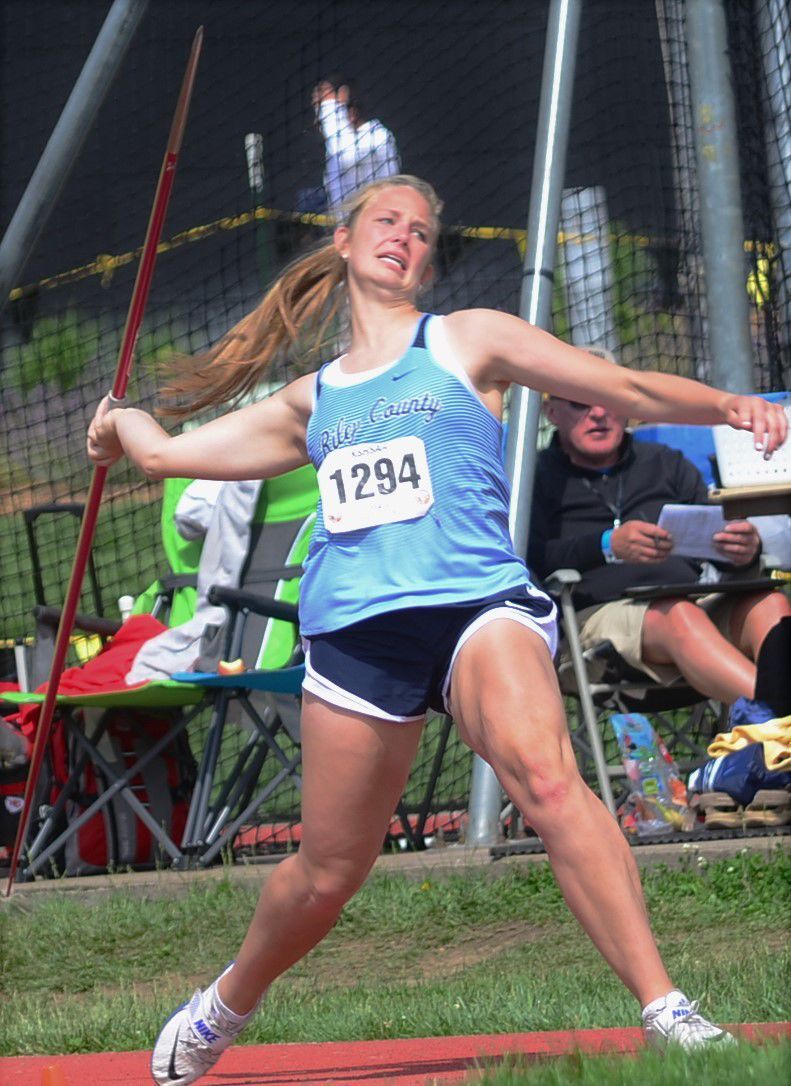 Riley County senior Jessi Brummet prepares to throw the javelin during Friday’s Class 3A track and field state championship meet at Cessna Stadium in Wichita. She finished second in the event.

Riley County senior Jessi Brummet prepares to throw the javelin during Friday’s Class 3A track and field state championship meet at Cessna Stadium in Wichita. She finished second in the event.

WICHITA — Sometime Friday afternoon, Riley County senior thrower Ames Burton crossed over from being just a high school athlete and cemented her place in Falcon lore. It’s hard to say exactly when this transmutation occurred, but odds are it happened soon after her final discus skipped across the grass roughly 147 feet — give or take two inches — from the thrower’s circle where Burton stood as a newly minted two-time state champion.

Burton already knew she had won before that final throw.

In fact, the senior had topped what ended up as the second-place throw on her first attempt of the day: 125-05. But two throws into finals, she topped that again with a throw of 140-01 and then put the icing on the cake with the final throw of 147-02.

“I had already won but I wanted to keep improving,” Burton said. “I don’t want to just settle.”

And the crazy thing was, both in her discus performance and during the shot put earlier in the day, Burton did not have her A-level material.

The senior came into the meet with the glint of possibly setting state records in her eye; she settled for two state titles instead.

“Obviously you can’t be displeased with a state title,” Riley County head coach Jesse Woodward said. “Ames didn’t have her best day, but her best wasn’t needed. She’s going to have a long and successful career moving on to Missouri. You can’t ever be disappointed about a state championship.”

Burton’s day started with shot put first thing in the morning. Despite the fact it is almost June and state track meets are notorious for either uncooperative rainy and muggy weather or blistering hot days, there was a chill in the air.

David Taphorn, long-time RCHS assistant track coach and middle school P.E. teacher, looked on from the side as Burton paced, jogged, stretched and did whatever she could to stay warm.

She started slow, throwing in the high 30s on her first two throws and then 40 feet, 11 inches on her final prelim throw. After each throw, she retreated from the crowd of throwers to talk to Taphorn, who affectionately is called “Mr. T” by every Riley County student (Burton included) thanks to his tall, muscular build and prominent facial hair that’s grown more prominent and grey as the years have gone by.

Burton goes to Taphorn looking for guidance, and while she gets that in spades, what she wants most is affirmation.

“She puts a lot of pressure on herself and she needs to just relax and do what she knows she can do,” Taphorn said. “If she’s doing something wrong, she knows it. She has that feel. So she comes back and asks, ‘Is this the problem?’ or ‘Is this what I need to fix?’I say yes almost every time. It makes my job a lot easier.”

Taphorn has coached Burton since she was in seventh grade and, like so many Falcons before her, he has watched her grow into an impressive athlete

“I don’t think I’d be where I am without Mr. T,” Burton said. “He definitely pushes me to be my best, but he doesn’t put a ton of pressure on me. He always reminds me to have fun and do what I need to do, and honestly, I think that’s part of what helps me excel.”

Burton put out her best mark of the day on her opening throw of finals: 41 feet, 3.5 inches. Not a personal record or a meet record, but good enough for the gold by almost a foot.

“After missing last year, I had just one last opportunity to get it done, and I’m glad I made this one count,” Burton said.

Now that it’s over, Burton can look ahead to what’s sure to be just the beginning of a promising career at Missouri. What she leaves behind is a legacy that’s well within the tradition of exceptional female track athletes who have worn Columbia blue. Annie Martin. Amy and Erin Mortimer. And now Ames Burton: Falcon legends.

“She’s probably right at the top of the list,” Taphorn said. “She’s just a special kid.”

When informed about Taphorn’s comparison after she stepped off the podium to accept her second gold medal of the day, Burton smiled and fought back a tear.

“He means so much to me, and for him to say that means even more,” Burton said.

Senior Jessi Brummett also found herself within reach of a state title Friday in the javelin. The senior was ranked first in 3A coming into the meet, but faced a tough field that included the eventual state champion and nationally-ranked Jadyn Troutman of Wellsville.

Brummett threw with the top of the pack throughout prelims but couldn’t pull away until her first throw of finals which went for 139-08, an 11-inch lead. Unfortunately for Brummett, Troutman came out on her next throw and eclipsed her with a throw of 142-09.

Despite the distance being within her range, the senior was not able to come up with a winning throw on her next two tries and ended up as the state runner-up.

“Second place is still good, but I think she’s a little disappointed,” Woodward said. “She didn’t have her best day, either, and it was barely short, just by a few feet. She’s had a great career and she’s going to go on and do great things. You always want to go out with the gold. If you don’t want to win, then why do it? My kids are competitors and they want to do well. She was upset, but in the end, it was a great finish for her.”

The Riley County girls finished seventh as a team.

The Red Raider 4x800 team came into Friday’s state track championship with a top seed and their eye on a gold medal, and while that didn’t quite work out, it wasn’t for lack of trying.

In fact, the team — consisting of sophomore Emery Wolfe, sophomore Jonathan Cutting, senior Eli Artzer and senior Caleb Shea — ran its best race ever Friday afternoon, eclipsing its previous mark by nearly six seconds (8:20.10). Buhler’s third-leg runner was unavailable for the regional meet, which hindered the Crusaders from getting a top-seed time. When Buhler junior Tanner Lindahl was added Friday, the Crusaders soared to a first-place finish, beating the Red Raiders by four seconds.

Joining the boys’ 4x800 team on the podium was senior sprinter Abby Faulkner.

Faulkner barely snuck into the 100 finals after finishing seventh in the prelims. After an adjusted mindset and a new strategy, Faulkner found herself running with the pack down the stretch of the finals and finishing second with a time of 12.49, .16 seconds behind Towanda-Circle’s two-time gold medal winner, Kimalee Cook.

“I was shooting for first or second,” Faulkner said. “I was bad getting out of the blocks in prelims, so I knew I needed to pick up the pace and then I got it.”

Also registering a personal best was Wolfe, who improved his 3,200 time by 14 seconds on the way to a fourth-place finish.

The boys 4x400 team consisting of Jacob Fritz, Mason Herzog, Jonathan Cutting and Caleb Shea finished with a sixth-place medal with a time of 3:33.43; junior Charlee Lind finished seventh in the girls 3,200 with a time of 12:48.67.

Also competing for Wamego was junior Alexis Holloway who posted a personal best in the triple jump by several feet with a distance of 29-6.25” and finished 15th; the girls 4x100 team of Sarah Jones, Kenzie Cooper, Emma Caffey and Faulker who finished 11th (52.22); the boys 4x100 team of Hagan Johnson, Jacob Fritz, Mason Herzog and Daryn Baldwin, who finished 15th; the girls 4x800 team of Caroline Donahue, Grace Williams, Adaline Fulmer and Lind who finished 14th (11:04.41); and the girls 4x400 relay team of Cooper, Donahue, Addison Denney and Sarah Jones, who placed 15th with a time of 4:32 which was a second improvement on their seedtime.

As a team, the Wamego girls finished 14th overall in Class 4A and the boys took 18th.

The Mustangs came into the state tournament with five entries, led by senior jumper Grace Fike who placed in both the long and triple jump.

Fike, who finished ninth in the long jump in 2019, ended her high school career with a jump of 16-8 on her second-to-last finals attempt.

Fike also placed seventh in the triple jump with a distance of 34-6.75, which was less than a foot off of her personal best.

The Rock Creek girls finished 29th in 3A as a team.

WICHITA — For the Valley Heights girls, it all came down to the last race of the day Saturday at the Class 2A track and field state championsh…

Countdown to Camp No. 1: Who will be Boise State's starting quarterback?

For Packers lineman Billy Turner, being ready for anything — and any position — is the name of the game