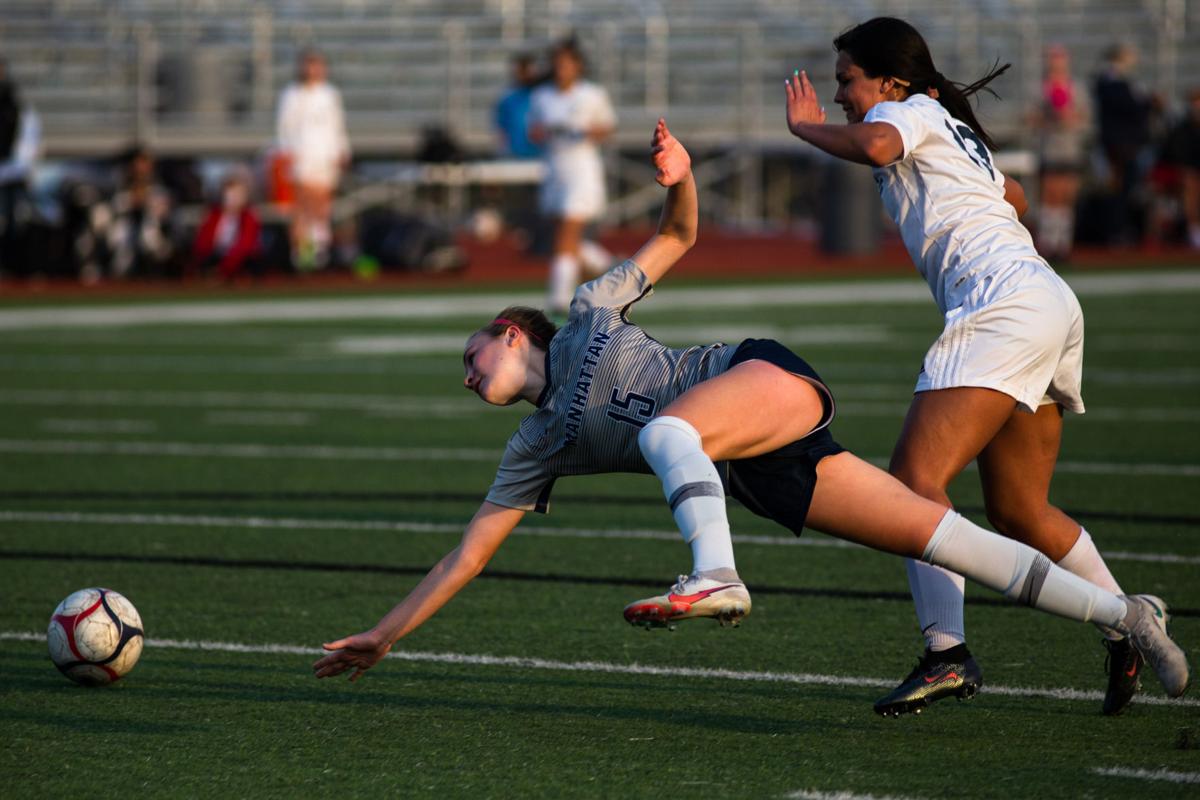 Manhattan's Reese Snowden (15) is fouled by Isabel Garcia (13) inside the Emporia box, giving Snowden an attempt at a penalty kick. Snowden went on to score, securing the first of Manhattan's 7 goals on the evening. 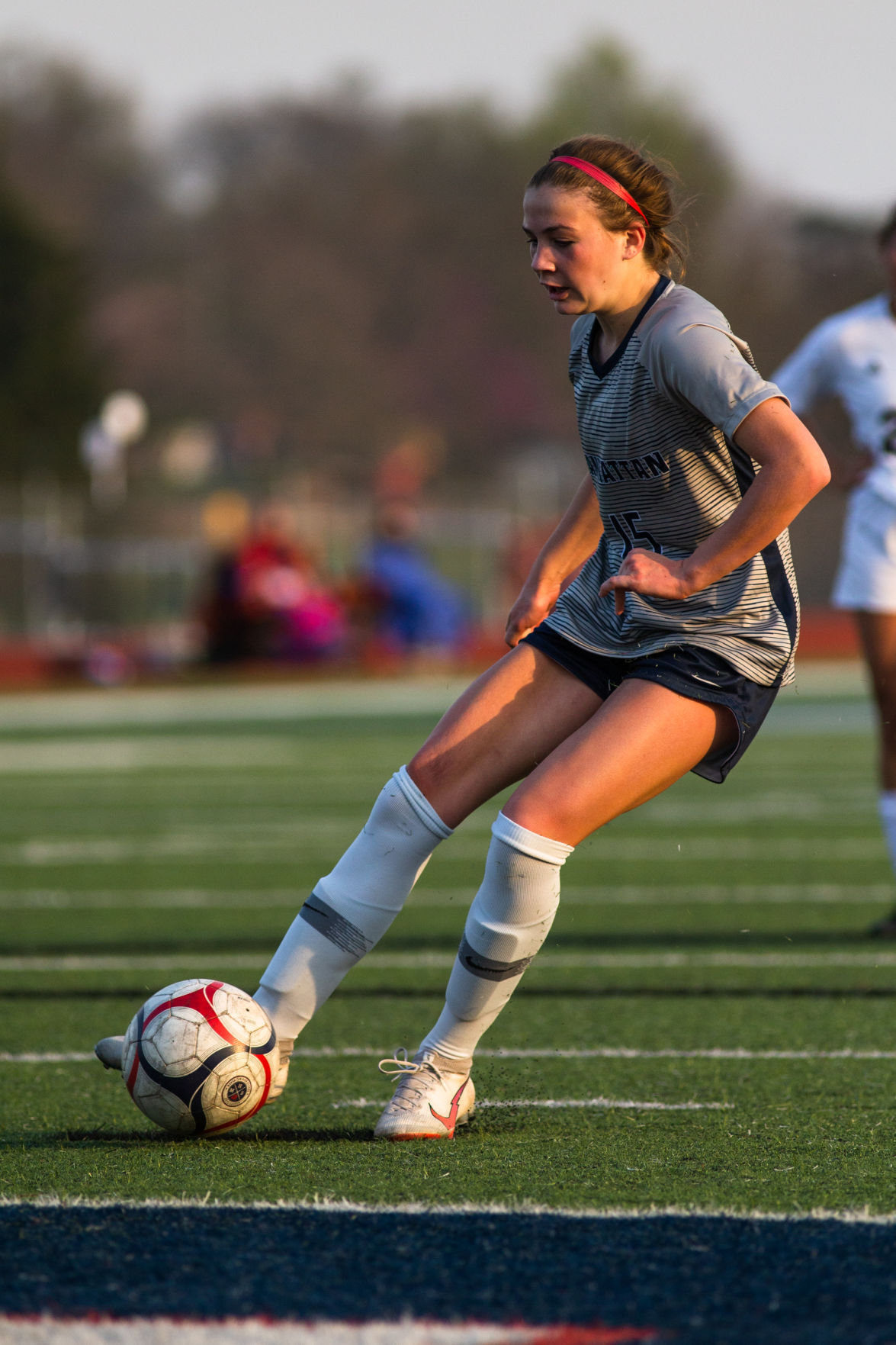 Manhattan's Reese Snowden (15) is fouled by Isabel Garcia (13) inside the Emporia box, giving Snowden an attempt at a penalty kick. Snowden went on to score, securing the first of Manhattan's 7 goals on the evening.

Manhattan forward Reese Snowden smiled at an iPhone camera with friends under each arm.

The sign on the turf in front of her read “GO SNOWDEN.” The scoreboard in the background might as well have read the same.

Snowden scored three goals during the Indians’ 7-1 win over Emporia at Bishop Stadium. Tuesday’s home opener offered Snowden’s friends the first chance to watch her play, and the freshman forward did not disappoint.

“It’s so cool having your team behind you and playing for your school,” Snowden said. “The best feeling is after you score, you turn around and hug all your teammates.”

Snowden earned her final group hug with 29:42 to play. After outrunning two defenders along the left hash, Snowden fired a ground-bound shot fast enough to squeeze through Emporia goalkeeper Nayeli Plazola’ hands and give the Indians a 6-0 lead.

It also gave Snowden her first varsity hat trick, though not her first ever. Snowden recalls scoring three goals in one game when she was 11 or 12 (she just turned 15 in March), “but it’s been a while,” she said.

That’s because Snowden entered this season thinking she would play defense for Manhattan head coach Mike Sanchez. Snowden plays outside back for her club team and assumed Sanchez would use her the same way.

But Sanchez deemed a capable striker “the missing piece” in his lineup during preseason practices. He thought Snowden’s skillset — composed, confident, strong on the ball — might fit the role.

Six games and seven goals laters, Snowden has excelled as the Indians’ finisher. Sanchez credits her soccer IQ, which includes a “knack for finding the goal.”

“That’s one of the toughest things to do is to each people how to be finishers,” Sanchez said. “She just has a natural way of finding the back of the net. For her to come out here and leave her mark as a freshman is fantastic.”

Snowden was one of several freshmen who contributed during Tuesday’s win. Grace Geisbrecht scored an off-balance goal from the edge of the box with 12:14 to play in the first half; Emery Ruliffson tapped a loose ball into the net four minutes into the second half; and Chloe Porter scored the Indians’ seventh and final goal off a corner kick with 26:23 to play.

Porter’s goal capped Manhattan’s Spartan-dooming start to the second half. Leading 3-0 at half, the Indians scored four goals in 14 minutes. Snowden scored two of her three in a 54-second span.

Sanchez complimented the Indians, who out-shot Emporia 25-4 and dominated possession, on their patience and ball movement. He credited Marleigh Hutchinson and Ella Ruliffson for organizing Manhattan’s defense.

But nobody stood out like Snowden, who said she’s still adapting to the attacker’s mindset.

“Sometimes you need to be selfish and take it yourself,” Snowden said. “That was a big transition for me, because I was just so used to playing off my forwards in club.”

On Tuesday, the Indians played off her to great success. And through six games, Snowden is flourishing at her new position.

Who knows what she might do after 12 or 24. Snowden already is a productive striker, but in Sanchez’s mind, Tuesday’s scoring outburst provided a mere glimpse into her potential.

“It’s all as far as she wants to go,” Sanchez said. “We have records here. If she wants to keep going, she can leave her mark. She’s got plenty of time.”

Life in the Red: The good, bad and potentially ugly ramifications of likely NIL changes, presented by Scott Frost