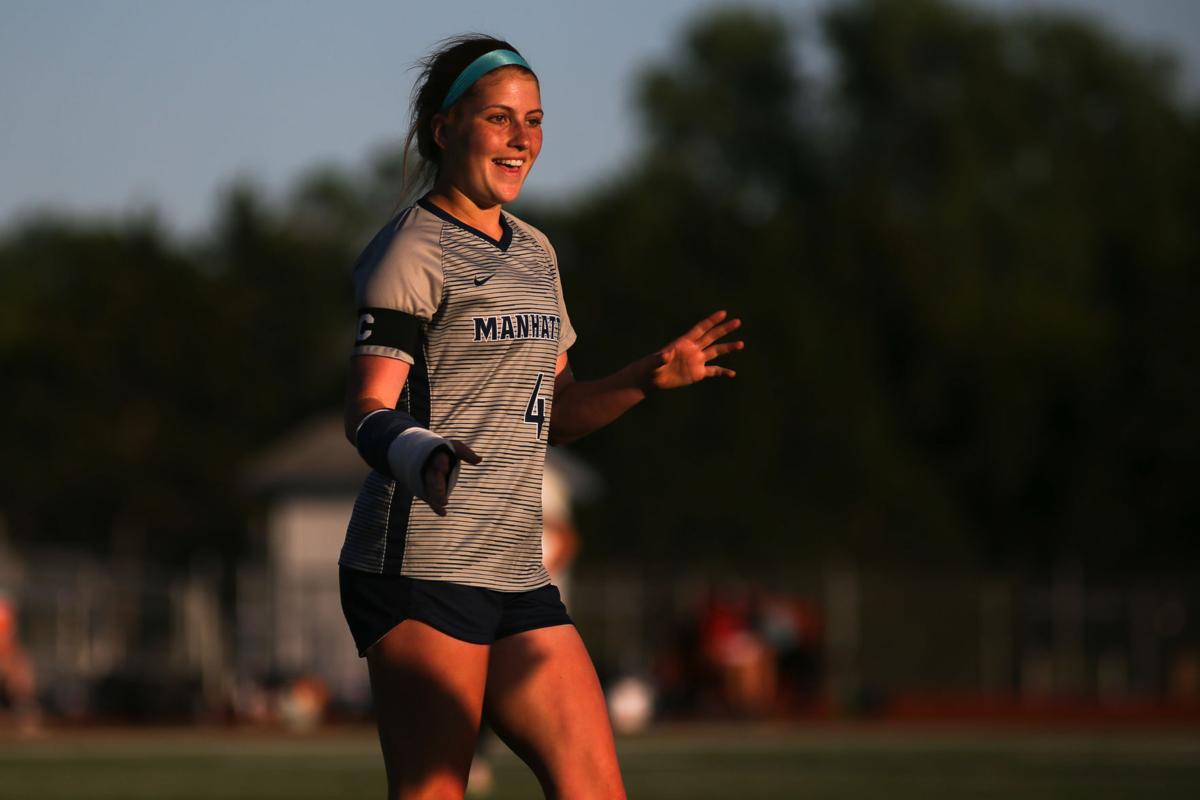 Manhattan senior Regan Geisbrecht (4) celebrates after a first-half goal from Reese Snowden during a match against Shawnee Heights on May 13. Geisbrecht has scored 27 goals in 2021, tied for the MHS single-season program record. Geisbrecht will have two more matches — Friday’s Class 6A state semifinal and either the title or third-place contest Saturday — to try to move into first place by herself. 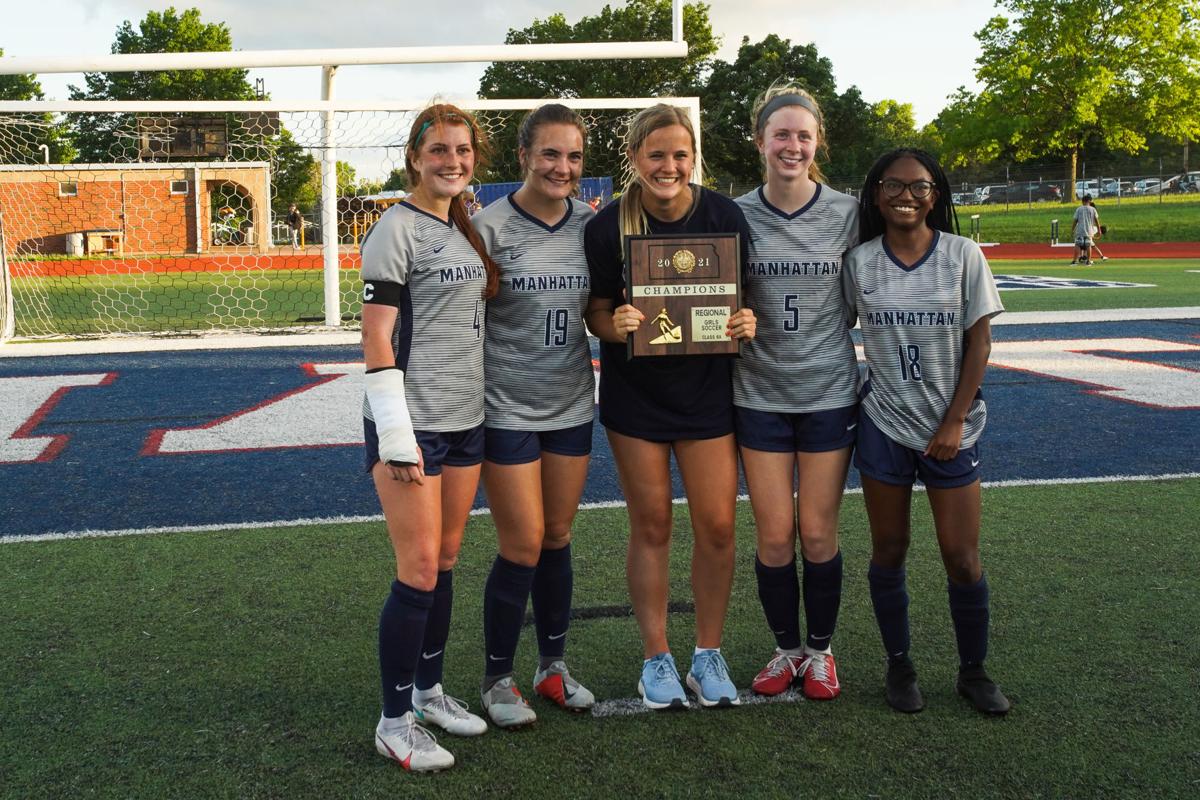 From left, seniors Reagan Geisbrecht, Marleigh Hutchinson, Faith Beyer, Sam Grynkiewicz, and Joydan Brown pose for a photo with the regional title plaque after their 3-0 quarterfinal victory over Derby last week at Bishop Stadium. The win moved MHS into the Class 6A semifinals, where it will face Shawnee Mission East at 7 p.m. Friday at Hummer Sports Park in Topeka.

Manhattan senior Regan Geisbrecht (4) celebrates after a first-half goal from Reese Snowden during a match against Shawnee Heights on May 13. Geisbrecht has scored 27 goals in 2021, tied for the MHS single-season program record. Geisbrecht will have two more matches — Friday’s Class 6A state semifinal and either the title or third-place contest Saturday — to try to move into first place by herself.

From left, seniors Reagan Geisbrecht, Marleigh Hutchinson, Faith Beyer, Sam Grynkiewicz, and Joydan Brown pose for a photo with the regional title plaque after their 3-0 quarterfinal victory over Derby last week at Bishop Stadium. The win moved MHS into the Class 6A semifinals, where it will face Shawnee Mission East at 7 p.m. Friday at Hummer Sports Park in Topeka.

Reagan Geisbrecht remembers what the end of a Manhattan soccer career looks like.

“Why am I about to start crying?” she asks.

Probably for the same reason her sister was crying three years ago: She knows her time is up. This weekend’s state tournament in Topeka, which begins at 7 p.m. Friday against Shawnee Mission East, is the last competition Reagan ever will play for Manhattan, under head coach Mike Sanchez, next to fellow seniors Sam Grynkiewicz, Marleigh Hutchinson and the injured Faith Beyer.

Regardless of the tournament’s outcome, Reagan and her classmates will, at some point on Saturday afternoon, look the same way she described Kendra’s class: crying, hugging, finished.

“It was just really sad to see that,” Reagan said of the 2018 scene. “Seeing them all hug each other afterwards, and (Kendra) realizing it was her last game and me watching that ... I don’t know.”

If you ask her parents, Reagan doesn’t cry much. And if you ask Reagan, she rarely shares her feelings at all.

But last March, when Sanchez texted the Indians’ group chat confirming that the season was canceled, she couldn’t help herself.

“Oh yeah, she cried a lot,” Reagan’s mother, Erika, said. “It was a pretty typical teenage girl response to something so heartbreaking.”

Reagan had grown up in soccer bleachers, kicking soccer balls, and making soccer friends. She started off watching Kendra, eating soft pretzels during the game and scoring goals at halftime. She played in a recreation league for most of her childhood, but she dropped basketball (the sport that her parents met each other playing in college), cross country and tennis for soccer once she started high school.

She liked her teammates, especially the class above her. She’d played with some of the 2020 seniors since middle school and grown close to them. She knew they eventually would graduate, but to lose them the way she did?

They’d never play on senior night, never experience their hug-and-cry moment. When the Geisbrechts hosted other soccer parents before last week’s regional final, one of their guests said losing last season “was almost like somebody died.”

“It seems like ridiculous to say that,” Brian said. “But you know, it’s just like, you know, something happened that — you’re there, and then you’re not. All of the girls who were seniors last year, they never got to have that.”

Reagan’s priorities remained unchanged as she channeled every emotion the pandemic inspired into her training sessions with former Kansas State track and field athlete Kaneil Harrison. When she and junior defender Marlee Hodges weren’t counting down the days to this season, they were working with Harrison. They practiced passing, dribbling, shooting, agility, balance and more.

“They were really intense,” Reagan said. “His sessions are really hard.”

Once the Indians returned to the field, Reagan authored the best season of her career. On Wednesday, Reagan scored her 27th goal, tying Cailey Perkins for Manhattan’s all-time single-season record.

She attributes her scoring spike to those training sessions, during which she thought about this weekend. She wanted her senior season to make up for the lost one — not just for her, but for her teammates who didn’t get another one.

“I was sad to lose my season, but I was even more sad to not get to watch them play their last season,” Reagan said. “That’s why having this last season of being able to go to state has been so special for me. I’m playing for the girls who didn’t even get one last year.”

After Tuesday’s 2-0 win over Wichita Northwest, Reagan, Grynkiewicz and Hutchinson confronted their Manhattan High mortality together. After the game, the senior trio walked toward the west goal at Bishop Stadium and, in unison, slapped the crossbar for the last time.

Neither Grynkiewicz nor Hutchinson wanted to consider their final performance of the Indians’ postgame tradition before the game. “Why did you say that?” they responded when Reagan said Tuesday was their last chance.

Reagan doesn’t know why. All she knows is that recently, she’s felt the need to stay present, to value each moment, to recognize the memories before they become memories.

Maybe she’s overcorrecting after seeing the pain on Kendra’s face three years ago. Maybe watching her friends lose their senior season put hers in perspective. Or maybe playing with Grace, her kid sister and freshman teammate, has helped her realize how frighteningly fast time can move.

Grace has three years to learn the same lesson. But Reagan already is warning her how short that is.

“I always tell my sister — especially losing junior year — my soccer career went away in the blink of an eye,” Reagan said. “So I just try to tell her, ‘Make it last. Make the most out of what you have.’’’

MHS preparing for return to Class 6A state semifinal

They’ve been here three times already, so they know what to expect.

When the Indians consider their previous trips to the state tournament, the competition is the first thing they remember.

“The teams are just so much better than the teams that we face in our Centennial League,” Geisbrecht said. “When we get the chance to play teams like this, it’s really fun, because we’re playing actual soccer. But we also just have to remember that we have to be on our ‘A-game.’”

Shawnee Mission East (15-4-0) is the lone team left in the bracket that Manhattan (15-3-0) has not played before. Washburn Rural will play Blue Valley in Friday’s other semifinal. MHS and Shawnee Mission East are 107 miles apart and share no common opponents.

No matter. This is the type of game Sanchez envisioned when he scheduled teams like Blue Valley West and Bishop Carroll.

The Indians may not have played Shawnee Mission East specifically, but they’ve played teams in its tier.

“That’s what we want to do with our schedule,” Sanchez said. “We will make it tough. We want to be ready for games like this.”

The Lancers enter Friday’s match having allowed the second-fewest goals in Class 6A (eight). The Indians enter with the most goals (101) in 6A, and on a seven-match shutout streak.

During its eight-match winning streak, Manhattan has outscored opponents 45-1.