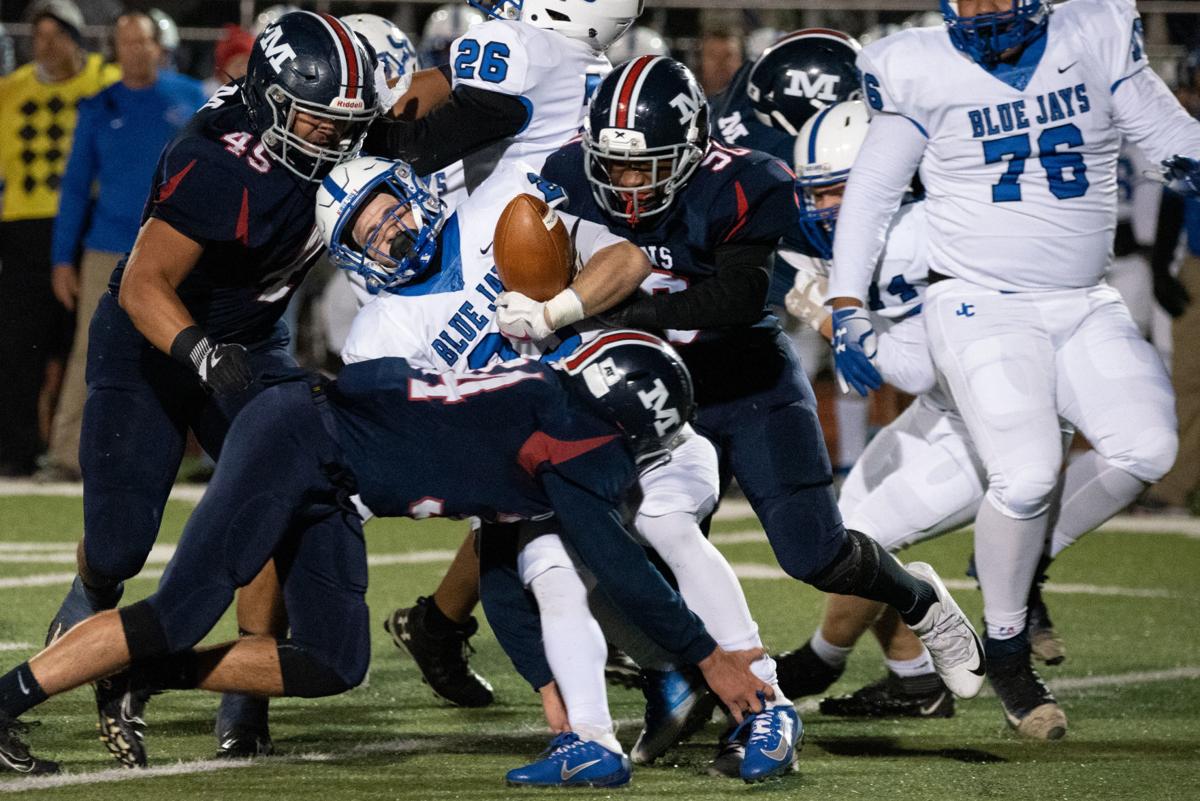 Manhattan High defenders Joey Meyer (34) and DaShawn Edwards (50) combine on a tackle of Junction City running back Russell Wilkey (23) during the first quarter. 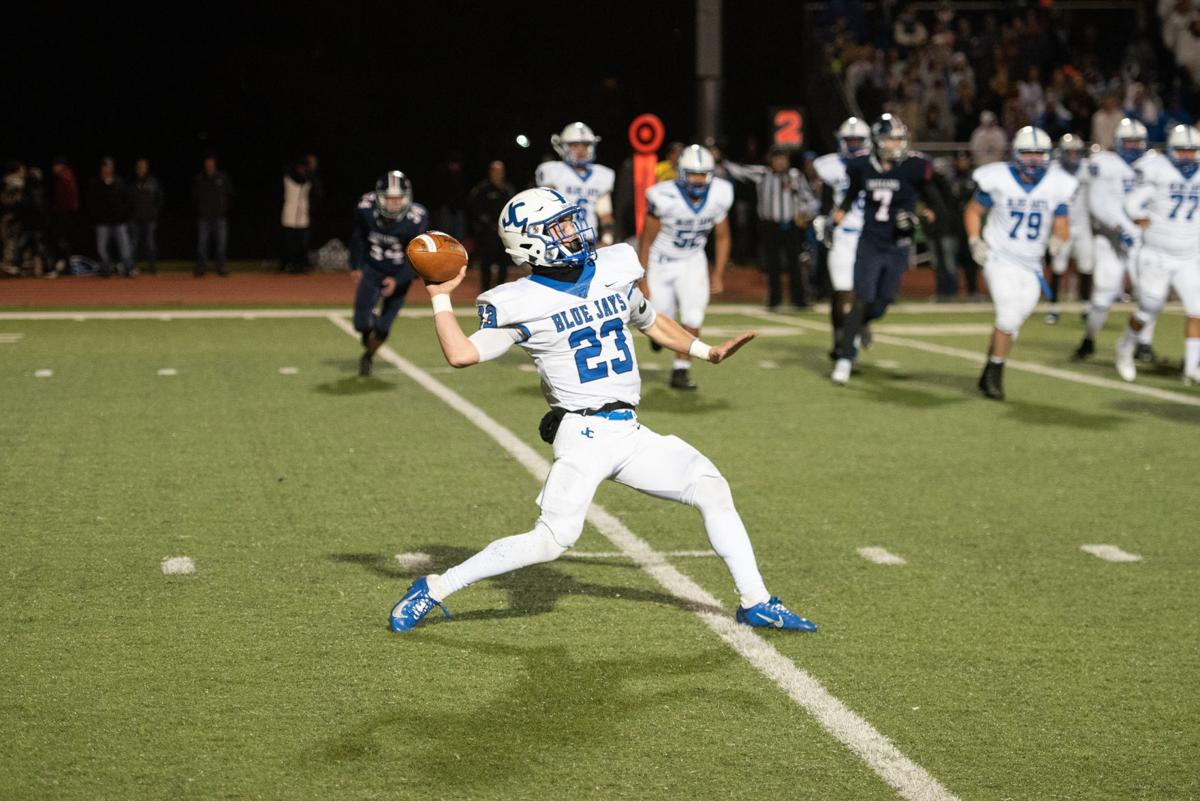 Junction City running back Russell Wilkey tosses a 79-yard pass to Qua’Vez Humphreys for a touchdown.

Manhattan High defenders Joey Meyer (34) and DaShawn Edwards (50) combine on a tackle of Junction City running back Russell Wilkey (23) during the first quarter.

Junction City running back Russell Wilkey tosses a 79-yard pass to Qua’Vez Humphreys for a touchdown.

The disappointment in Randall Zimmerman’s voice was evident following Junction City’s last-second loss at Manhattan on Friday. To lose to arch-rival Manhattan High is never easy; that his team — which entered Friday undefeated at 5-0 and ranked No. 5 in Class 6A — did itself no favors made it even harder for him to stomach. He went on to list the specific yardages, and specific plays, he thought made the difference in the Blue Jays’ 31-28 loss to the No. 9 Indians at Bishop Stadium.

And none of those plays — “six to eight” in sum, he said — even included the three first-half turnovers the team committed.

“Manhattan’s a good team,” Zimmerman said, moments after addressing his own team in the wake of its first loss of the season. “They kept quite playing hard and we just didn’t quite get it done.”

It was no fault of Junction City’s (5-1, 4-1 Centennial League) passing game. The Blue Jays’ high-flying attack once again excelled thanks to quarterback Andrew Khoury. The junior signal-caller completed 13 of his 18 attempts for 177 yards and two touchdowns.

His lone interception did prove costly, however. On the second drive of the contest for Junction City, Manhattan defensive back Ty’Zhaun Jackson picked off Khoury at the visitors’ 22-yard line. Five plays later, Indian running back BJ Young crossed the goal line for the game’s first score, which came with 1:08 left in the opening period.

On the ensuing possession, Junction City committed another turnover, this time fumbling the ball away. Young was back in the end zone shortly after, dashing in for a 7-yard score with 11:15 remaining in the first half. Following Grant Snowden’s successful point-after attempt, Manhattan (5-1, 4-1) stretched its lead to 14-0.

That’s when the Blue Jays began their comeback, leaning on the diverse skillset of junior running back Russell Wilkey. At the 9:27 mark, Wilkey hauled in a pass from Khoury and took it in for a 28-yard score, though Junction City’s try for two points was no good. Still, the Blue Jays had the momentum, going on to force a three-and-out from the Indians on the ensuing possession.

When Junction City’s offense returned to the field, it went right back to Wilkey. After starting at its own 46-yard line with 7:14 to go in the second quarter, Junction City had second-and-6 from the MHS 7-yard line. Wanting to discuss the next play, Zimmerman called a timeout.

The decision paid off, with the Blue Jays running a reverse jet sweep that caught Manhattan’s defense flat footed as Wilkey ran into the end zone.

“We just ran a little reverse with our A-back,” Zimmerman said. “We just felt like they were overcommitting really hard, and we were trying to get our kids going, get them doing something.”

After Khoury connected with star receiver Qua’Vez Humphries on a fade route for a successful two-point conversion, the game was knotted at 14. And the Blue Jays kept rolling from there. Following another three-and-out from the MHS offense, Junction City took over at the hosts’ 46-yard line, going 45 yards in five plays.

But on second-and-goal and a yard away from their first lead, the Blue Jays coughed up the football. Manhattan recovered and ran out the clock, sending the teams into the break tied.

Zimmerman pointed the finger at himself for the miscue.

“I just didn’t have them ready to go, and (we) probably should have stayed in our shotgun formation, but I did not want to do that on the 1-yard line,” he said. “We have our three-back offense right there. They stayed in an odd front. ... We just didn’t quite get the snap. So it’s all on me. I’ll take that.”

Yet despite its plethora of first-half errors — which also included a holding call on its first possession, wiping away a punt that would have pinned Manhattan at its own 2-yard line — Zimmerman said he went into the locker room upbeat they had played the Indians to a draw on the scoreboard.

“We had three turnovers, it was all us,” he said, “but we had come back and tied the thing up. (So I said), ‘Let’s regroup. Let’s just make sure we’re taking care of ourselves and come out and win the second half.’”

Junction City surged ahead for the first time on a perfectly executed trick play: a double pass. Khoury took the snap and threw to his right. Wilkey hauled it in, and then looked downfield, where he hit Humphreys. The 6-foot-2, 190-pound senior outran Manhattan’s would-be tacklers on his way to a 70-yard score. Though the PAT (point-after touchdown) was no good, the Blue Jays were on top 20-14.

The double pass, Zimmerman said, isn’t a new wrinkle in the playbook. In fact, the Blue Jays scored on the same play earlier this year. Zimmerman just saw another opportunity to dial it up given the looks the Indians showed.

“They were just coming up the field so hard on us and not giving us much underneath stuff, so we just tried a double pass to get it over the top,” he said. “(Junior wide receiver) Marcel Bussey did a good job of protecting that, because they had a big outside ‘backer out there. So it’s just something we saw at the time that we could get and thought we should take it. The kids did a good job executing it.”

Manhattan responded on the next drive, with quarterback Dayne Aschenbrenner running for a 41-yard touchdown. Snowden nailed another PAT to put the Indians back on top 21-20 with 3:27 to go in the third quarter. Two minutes later, Junction City reclaimed the lead on a 46-yard scoring strike from Khoury to Bussey. Yet again, Aschenbrenner provided the answer for the Indians, bulling into the end zone from a yard out to level the game at 28-all (following another PAT from Snowden) with 9:27 remaining.

Junction City did its best to run out the rest of the clock on the next drive, eventually facing a fourth-and-1 at the 7-yard line. Eschewing a field goal attempt, the Blue Jays went for it. Khoury kept it himself. It was close — close enough for the officials to bring out the yard marker for a measurement.

The ruling: Khoury was short.

“Fourth down, we thought it very clearly was a (first down),” he said. “But it makes it awfully tough when you’re inside the 10-yard line, have a chance to punch it in by seven or eight and just can’t quite get it done.”

That set the stage for heroics from Snowden, who nailed the game-winning 38-yard field goal as time expired.

“And it was right at the edge,” Zimmerman said. “Sadiki (Smith) is very close to getting the thing blocked as well. But my hat’s off to them. They just kept playing.”

After outgaining Manhattan in total yardage (387 to 305) and nearly winning despite losing the turnover battle, Zimmerman’s postgame message to his team was straightforward: The loss was on them. Red-zone errors were the Blue Jays’ undoing, costing an unbeaten season — and another potential win over the Indians — in the process.

“We turned the football over twice inside the 10. You can’t do that,” Zimmerman said. “You can’t do that in big games like this against very good teams like Manhattan. They’re a very good, very physical football team, and we just squandered opportunities.”

Husker Extra Podcast: Ep. 141: Sorting through the bin of concerns for Husker hoops and football