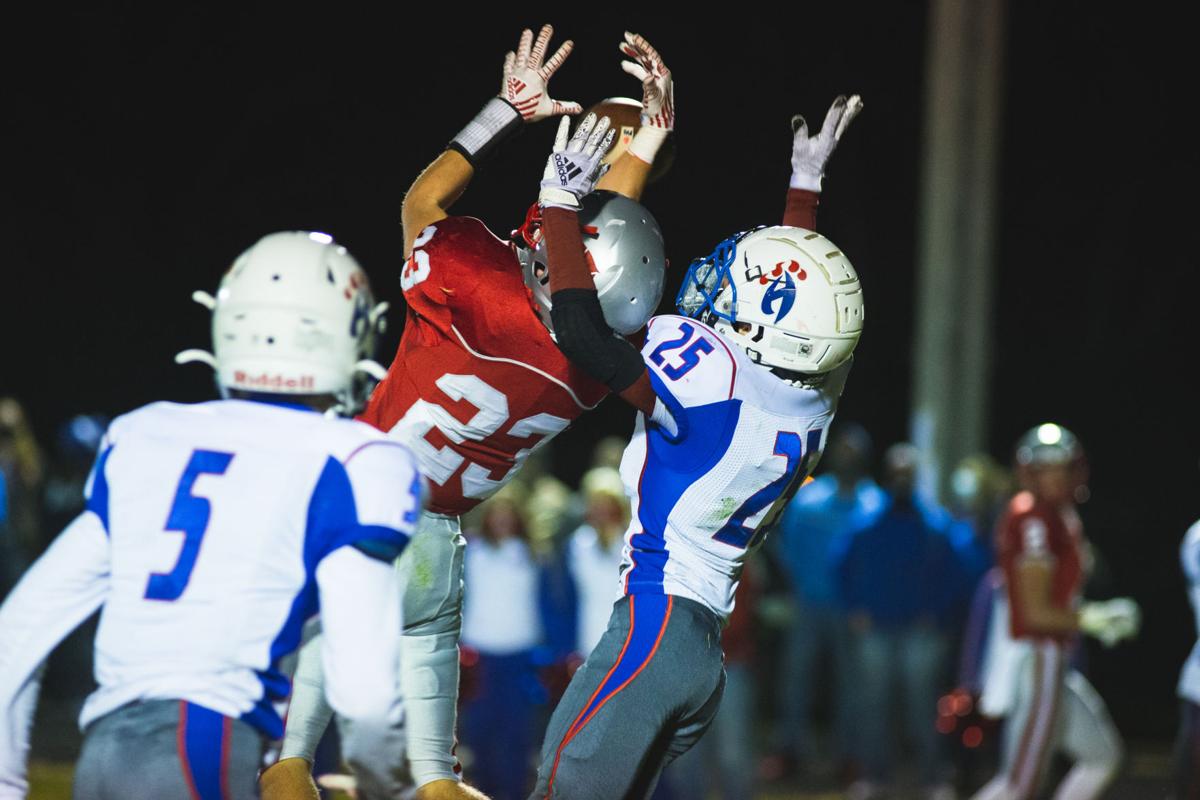 Frankfort receiver Caden Dalinghaus (23) attempts to pull in a pass Friday night in Frankfort. Dalinghaus had eight receptions for 98 yards and two touchdowns in Frankfort’s loss to Hanover. 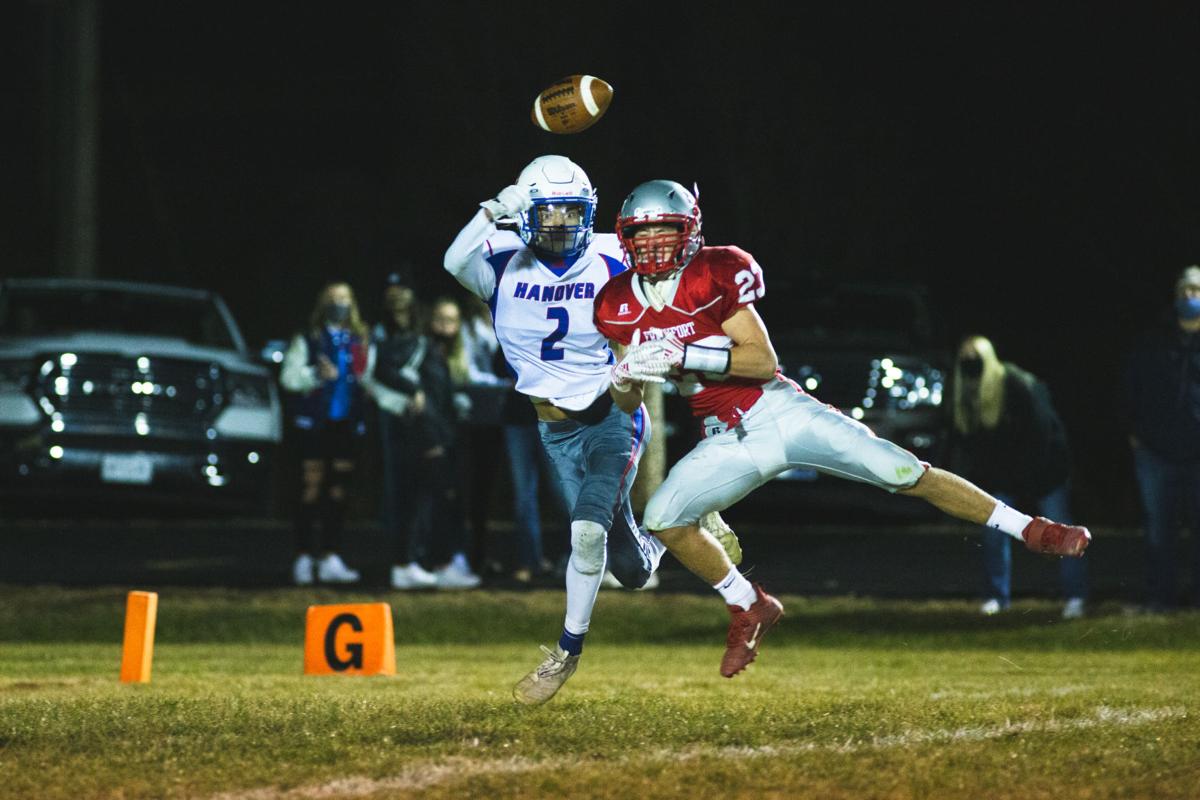 Frankfort’s Caden Dalinghaus (23) breaks up a pass intended for Hanover’s Keagan Dimler (2) Friday night. Hanover could not be stopped offensively and won 74-26, earning a trip to the championship game next week.

Frankfort receiver Caden Dalinghaus (23) attempts to pull in a pass Friday night in Frankfort. Dalinghaus had eight receptions for 98 yards and two touchdowns in Frankfort’s loss to Hanover.

Frankfort’s Caden Dalinghaus (23) breaks up a pass intended for Hanover’s Keagan Dimler (2) Friday night. Hanover could not be stopped offensively and won 74-26, earning a trip to the championship game next week.

FRANKFORT — Nick Anderson had a feeling his team was fortunate to still be in the game as his defense ran back onto the field midway through the second quarter Friday.

The score, a narrow 16-14 lead for Hanover, appeared to showcase a game that was more evenly matched in reality than it had appeared on paper. To that point, the eye test mostly had confirmed the same thing, with both teams having to fight for yards and coming up with big plays here and there.

Yet for Anderson, Frankfort High’s head coach, there was a sense of unease.

“Not really anything (was going well) to be honest,” Anderson said. “We were lucky to force a turnover. Our first two touchdowns came on fourth-down situations where we caught them sleeping.”

Both of Frankfort’s touchdowns to that point came on pass plays of 36 and 39 yards. They were breaths of life for a team holding on for dear life as Hanover tried to pull away.

It was the second touchdown that set the stage for Anderson’s defense to run onto the field down 16-14. Nineteen seconds of game time later, the group ran back off.

This time, it was Hanover that hit on a big play, with running back Colin Jueneman taking a toss play 55 yards to the house to move Hanover back up two scores.

That’s when everything unraveled for Frankfort. It could do little to stop No. 2 Hanover for the remainder of the night, as Hanover eventually went on to win by mercy rule, 74-26.

Frankfort’s (7-2) first-half efforts came undone in the final 4:30 of the second quarter.

Then, after failing to convert on fourth down, Hanover marched down the field in the final minute of the half to score on a 13-yard touchdown pass from Jacob Jueneman to Colin Jueneman.

After being down just 16-14, Frankfort walked off the field at halftime trailing 38-14.

“That’s their MO,” Anderson said. “Once they smell blood, they go after you. If you turn the ball over and give them a short field, they’re going to capitalize.”

To Frankfort’s credit, the hosts didn’t quit. The team forced a Hanover three-and-out to start the second half and then marched down the field on Cornelison’s back to score on a 10-yard touchdown pass with 7:20 left in the third quarter.

However, that score only brought Frankfort back within three scores. Just three plays later, Hanover (10-0) went back up by four touchdowns and some change following a 46-yard Jacob Jueneman scoring run.

It was at that point Hanover truly started to dial up its defensive pressure. Defensive end Keagan Dimler made a home in the Frankfort backfield, constantly harassing Cornelison when he dropped back.

It didn’t help that Cornelison had to pass the ball more than he was accustomed to. The senior quarterback dropped back 31 times on the night, his highest total of the season. It was the first time since Frankfort’s season opener that he attempted more than 10 passes in a single game.

The increased reliance on the passing game stemmed in part from Frankfort trailing, but also in its inability to consistently move the ball on the ground against the Hanover defense. While there were plays in which Frankfort managed to rip off large chunks of yardage, those highlights were outnumbered by runs that went for no gain at best. In the end, Frankfort managed just 100 rushing yards.

“They had a lot of blitzing schemes they drew up,” Cornelison said. “Credit to them because it worked. There was nothing we could do when they were bringing four and we only had three to block.”

With turnovers and short drives putting its defense in challenging positions, there was little Frankfort could do to slow down Hanover. The No. 2 team in the 8-Man Division II class, Hanover finished with 310 rushing yards and outscored Frankfort 36-12 in the second half.

Hanover sealed its victory on a play that was reminiscent of Frankfort’s initial scores, as Jacob Jueneman completed what essentially was a check-down pass to running back Tyler Bonser on fourth-and-23. Bonser raced upfield, beating a squad of Frankfort defenders to the corner of the end zone for a 29-yard score with 2:40 left in the game. The touchdown put Hanover over the 45-point margin needed to institute the mercy rule.

“They’re a fine football team,” Anderson said. “It’s disappointing. We probably didn’t play our best football. Credit to them, they took us out of everything we wanted to do.”