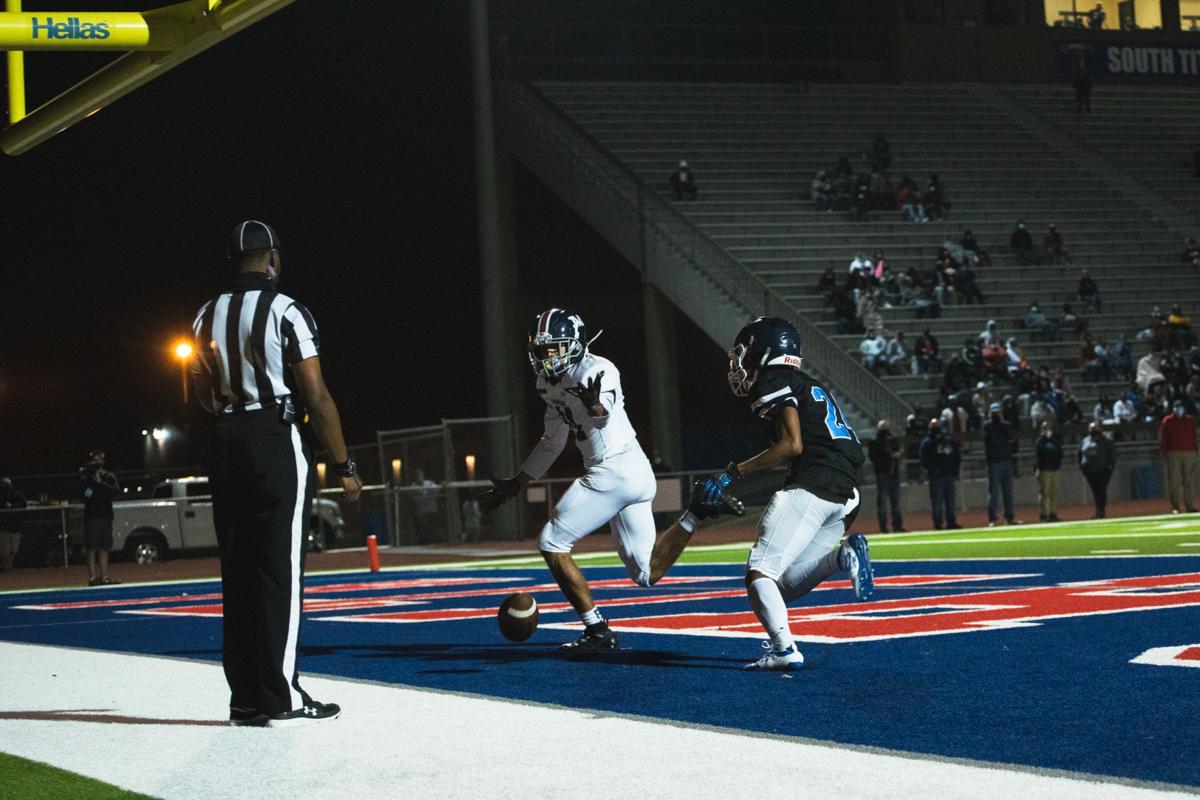 Manhattan junior Tate Brown drops a pass from quarterback Keenan Schartz in the end zone. Wichita East beat MHS 20-7 on Friday to bring the Indians’ 2020 season to a close. 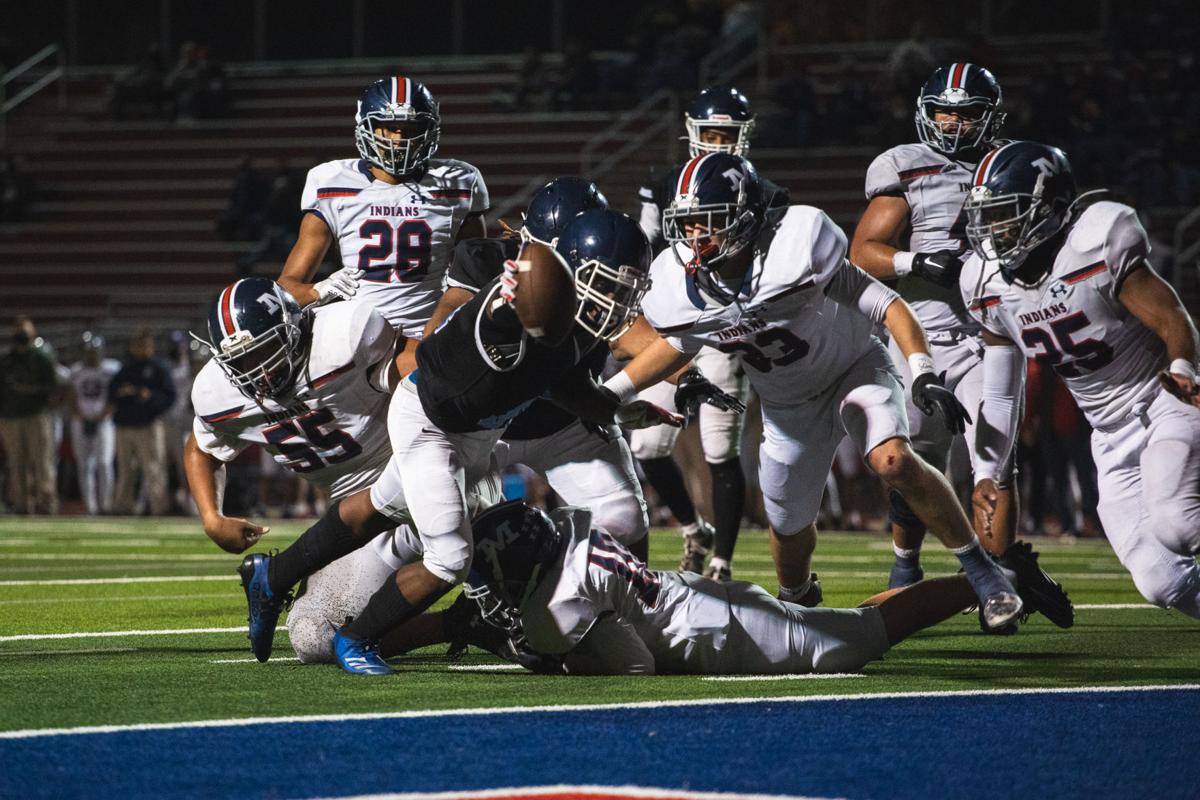 Wichita East running back Dayontay Standifer stretches for the goal line but comes up short as the Manhattan defense holds him back. The game was a defensive bout, with only four touchdowns scored the entire game from two typically higher scoring teams. 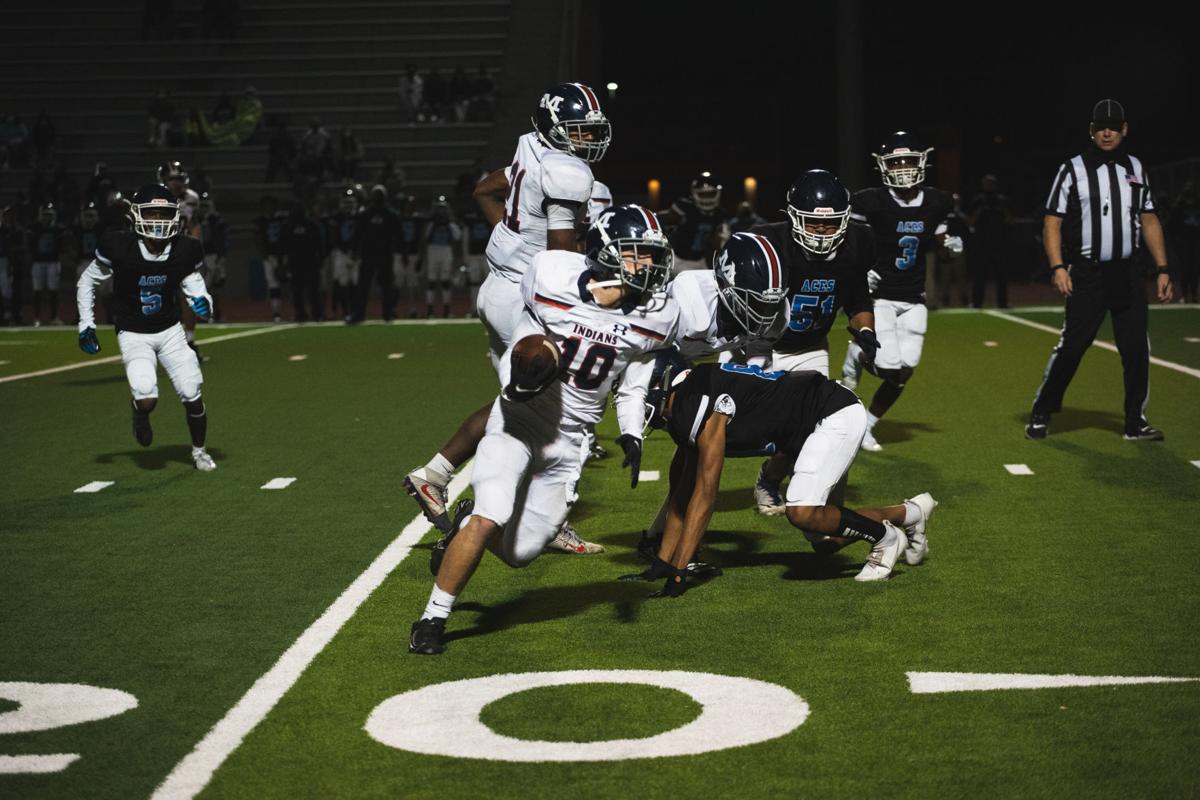 Manhattan defensive back Colby Klieman (10) rushes to the endzone after picking off a pass to score Manhattan's only touchdown of the night.

Manhattan junior Tate Brown drops a pass from quarterback Keenan Schartz in the end zone. Wichita East beat MHS 20-7 on Friday to bring the Indians’ 2020 season to a close.

Wichita East running back Dayontay Standifer stretches for the goal line but comes up short as the Manhattan defense holds him back. The game was a defensive bout, with only four touchdowns scored the entire game from two typically higher scoring teams.

Manhattan defensive back Colby Klieman (10) rushes to the endzone after picking off a pass to score Manhattan's only touchdown of the night.

WICHITA — For the first time all Friday night, Manhattan High’s offense was moving the ball.

The Indians, who had been largely stagnant to that point, seemed to have found life in backup quarterback Keenan Schartz, who entered the game for the first time late in the third quarter. The sophomore made an immediate difference, completing passes of 11 and 21 yards before the end of the period to move MHS down field.

Manhattan started the fourth quarter of its regional against Wichita East on the Blue Aces’ 23-yard line, down 14-7. Moments later, wide receiver Tate Brown had the tie in his hands. Schartz threw a perfectly placed ball to Brown in the back of the end zone as East’s defenders looked on helplessly.

The ball hit both of Brown’s hands and tumbled to the ground. The junior crouched for a moment, seemingly stunned at what had happened, and then slammed his hands on the turf.

It wouldn’t be the last error that hurt Manhattan on the night in a game in which it lost 20-7.

The Indians didn’t score following Brown’s drop, coming up a yard short on an attempted fourth-down conversion. Still, the MHS defense held firm, pinning East deep in its own territory.

Following a poor punt, Manhattan regained the ball with over eight minutes left at the East 43-yard line. The possession didn’t last long, however, as Schartz attempted to find receiver Joe Hall in double coverage and instead put the ball in the hands of East’s Trayvon Manuel-Atkinson for an interception.

Again, Manhattan’s defense pulled its weight, allowing just one first down before forcing a punt. This time, the Indians’ didn’t wait for the chance of another poor punt. They sold out for the block.

Instead of getting to the ball, they dove through the punter’s plant leg. That was an automatic first down for the Blue Aces.

This time, it was too much to ask Manhattan’s defense to save the day for a third possession in a row. East rattled off a drive that bled the clock down to 1:29 left in the game before scoring a back-breaking third touchdown to go up 20-7. That’s where the game, and Manhattan’s season, would finish.

“It’s difficult because we had a fine group of seniors who played their last football game for Manhattan High,” head coach Joe Schartz said. “That’s difficult and upsetting to them and the rest of us, because they were a fantastic group to coach.”

It was a night of polar opposite performances, as Manhattan’s offense had its worst game of the season while the MHS defense had one of its best. In the end, the latter couldn’t make up for the former.

The defense was going up against a squad coming off a 46-6 rout of Campus High and averaging 320 total yards and 42 points per game.

Early in the second quarter, Manhattan’s defense appeared to tighten its vice grip on the Blue Aces, as safety Colby Klieman grabbed an interception off a tipped pass and returned it 16 yards for a touchdown. Suddenly, Manhattan (6-4) led 7-0 despite having done little offensively.

East responded on the next drive, after MHS kicker Grant Snowden smacked his kickoff off a forward blocker to set up an East recovery on the Manhattan side of the field. However, it took a fourth-down conversion to score the touchdown, as East quarterback Daylan Jones completed a 6-yard pass to Caquoy Patterson despite being hit while throwing by Manhattan’s Jeramiah Eustaquio.

In fact, all of East’s touchdowns on the night came on plays in which its drives could have ended. The Blue Aces scored in the third quarter on a 22-yard pass from Jones to AJ King despite facing a third-and-long situation. They scored their fourth-quarter touchdown on another fourth-down conversion.

Only one of East’s touchdown drives was more than 50 yards. Manhattan held the Blue Aces to 211 total yards. Still, players like MHS defensive end Damian Ilalio were left to wonder if they could have given anything else.

“I’m not going to speak for everybody else — I think everybody else played a great game — but myself, there were some times where they were fast, and we don’t play fast teams like that every day, and I could have held the edge a little bit better on those plays,” Ilalio said. “You give everything you have on the field, and it’s too late to change anything now, but they’re fast.”

However, the MHS offense was unable to reward the efforts of its defense, managing just 164 total yards of its own. It was the first time all season Manhattan didn’t score an offensive point during a game. The last time that happened was Manhattan’s 56-0 defeat to Derby in the 2019 playoffs.

The Indians’ issues stemmed from a multitude of problems. The first was they were facing an East defense that had only allowed 50 points all season.

The Blue Aces showed their talent, but also outmatched the Indians schematically during the first half. It was apparent from the start East did not respect Manhattan’s ability to throw, as it placed all 11 defenders within 10 yards of the line of scrimmage and played single coverage on Manhattan’s outside receivers while leaving its safeties in the box for run support.

The result was a complete suffocation of Manhattan’s offense. In the first half, running back Vincent Smith, who ran for 127 yards last week, had just 13 rushing yards on seven carries. The Indians as a whole had just 63 total yards of offense.

“They were fast and aggressive,” Schartz said. “We weren’t holding our blocks and people were crossing our face. They got up there and were extremely aggressive, and our guys didn’t react real well.”

However, Manhattan didn’t do itself any favors throughout the game. Brown had his first drop of the night in another pivotal spot, as a ball went through his hands on what would have been a third-down conversion to set up MHS inside Blue Aces’ territory.

The wide receiver was far from the only MHS player to struggle in the passing game, as the Indians had at least five drops on the night. There also were other missed chances through the air, including one wayward pass from quarterback Dayne Aschenbrenner in the third quarter that likely would have resulted in a touchdown had the ball been placed in catching range for running back Mason Reid. Instead, it landed close to 3 yards away from where Reid was.

In the end, the mistakes added up to an insurmountable obstacle as the clock ran out on Manhattan’s 2020 campaign. Self-inflicted errors played a large role during Manhattan’s regular season. On Friday night, they proved to be the Indians’ downfall.

Still, the team is able to take some positives out of a season filled with struggles. Just three months ago, many of the players were unsure if they’d even be allowed to play.

“We had so much adversity this year,” Ilalio said through tears. “Corona(virus), not knowing if we’d be able to play, masks in the weight room, so much adversity we’ve overcome. I’m really proud of my boys, especially the younger ones toward the end of the season. ... I’m so proud of how far they’ve come.”