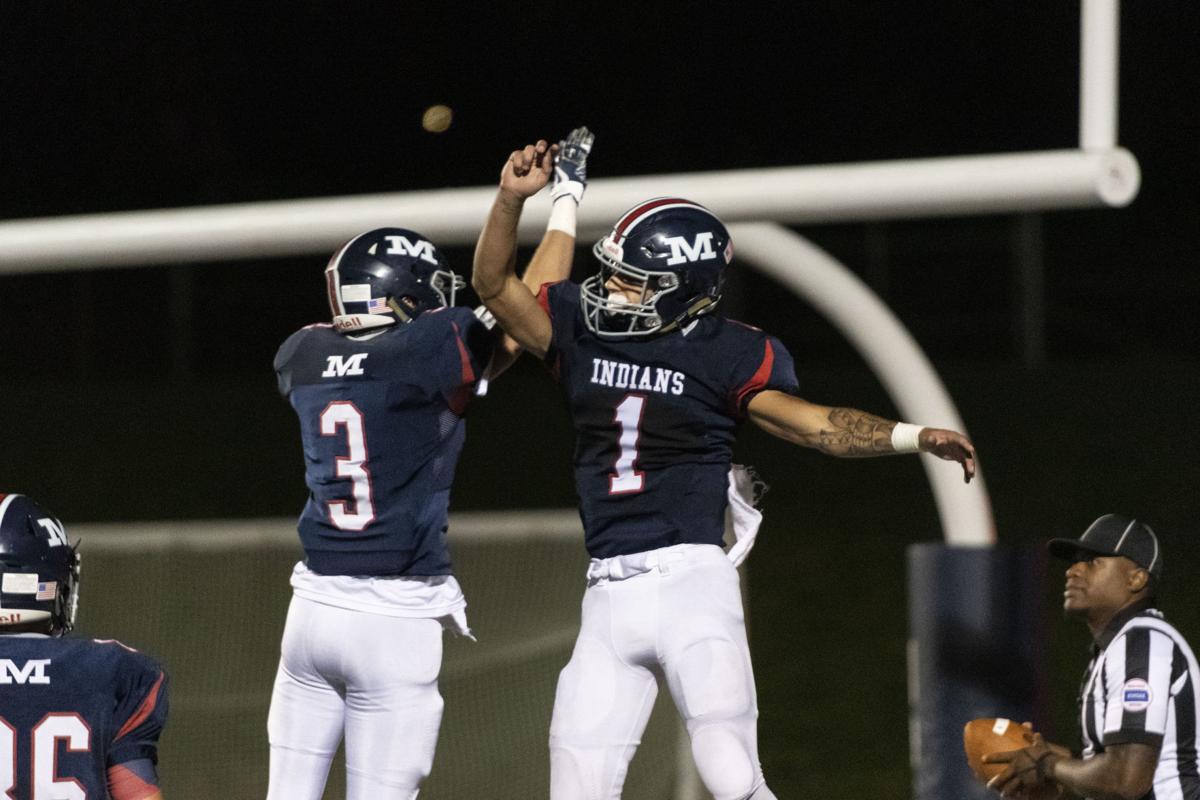 Manhattan senior running back Jaylynn Liggons (1) celebrates with senior wide receiver Gavin Kohn (3) after scoring a touchdown during the game against Wichita Southeast on Friday at Bishop Stadium. Manhattan defeated Wichita Southeast, 73-20, to open the postseason. The Indians will face Wichita West in the second round. 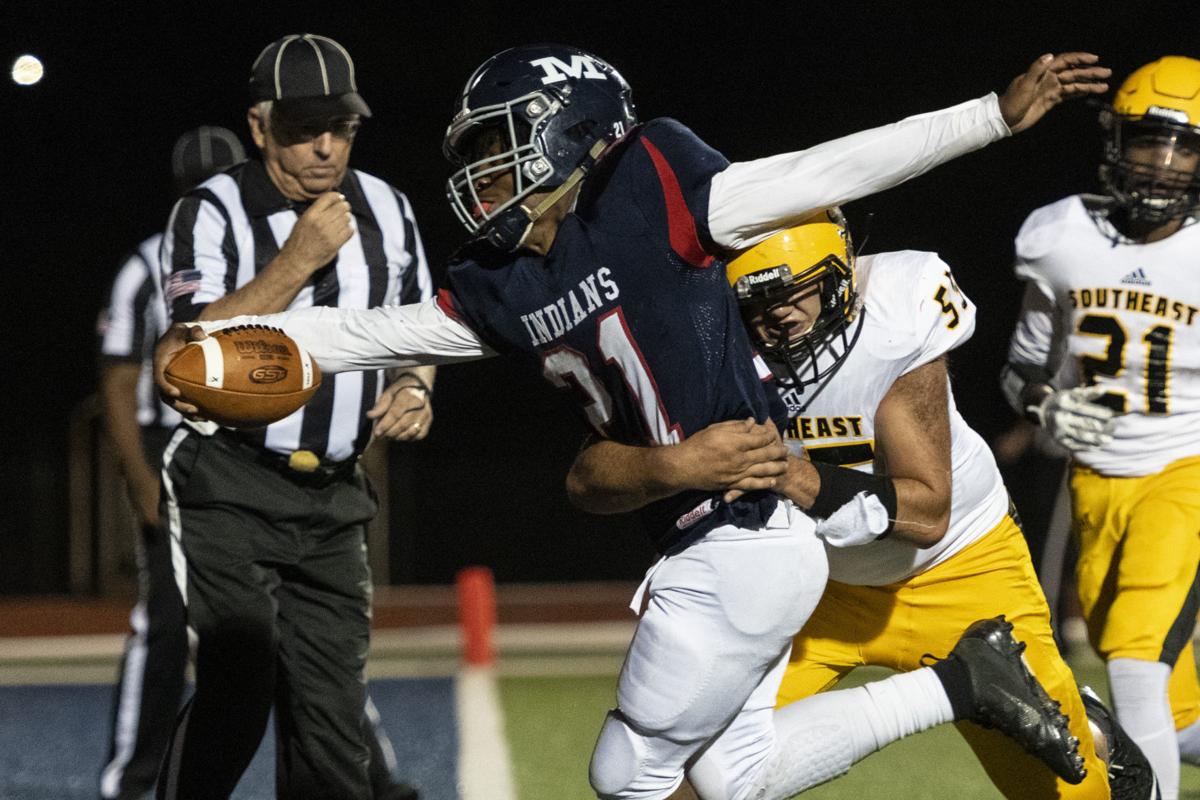 Manhattan senior running back Kevontae McDonald (21) dives into the end zone for a touchdown. 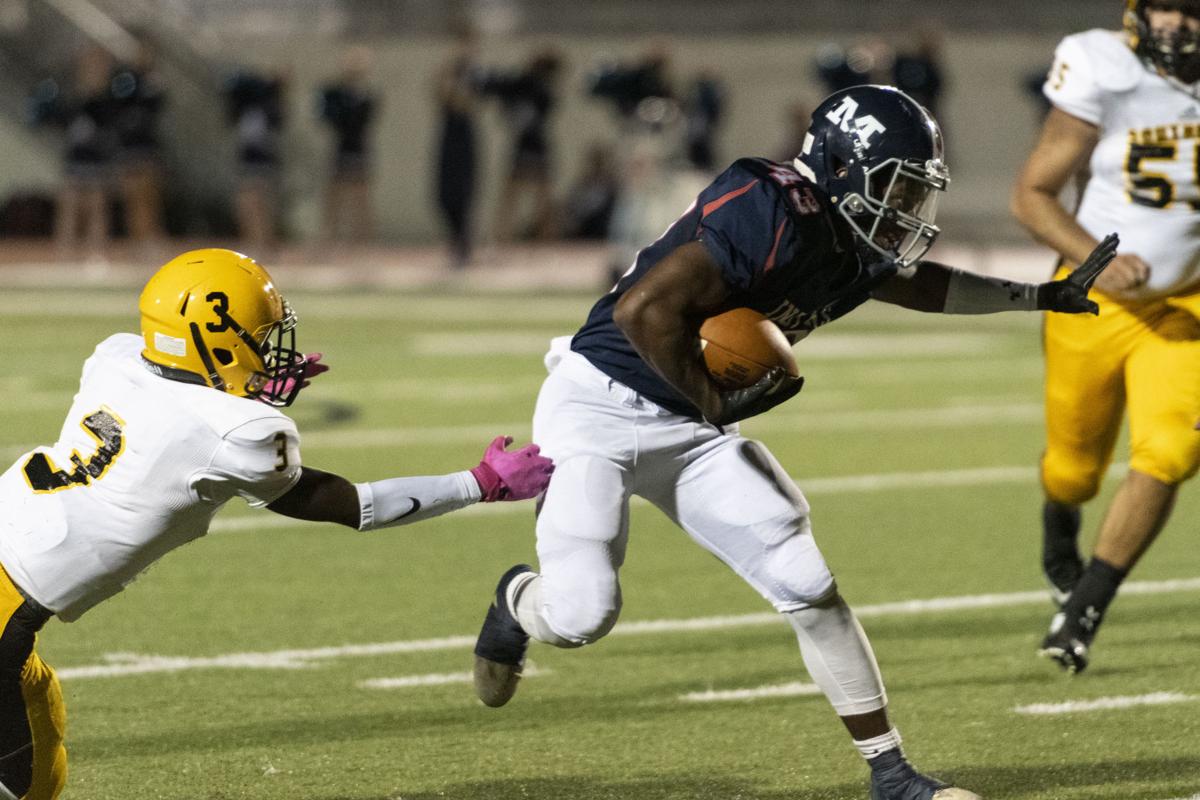 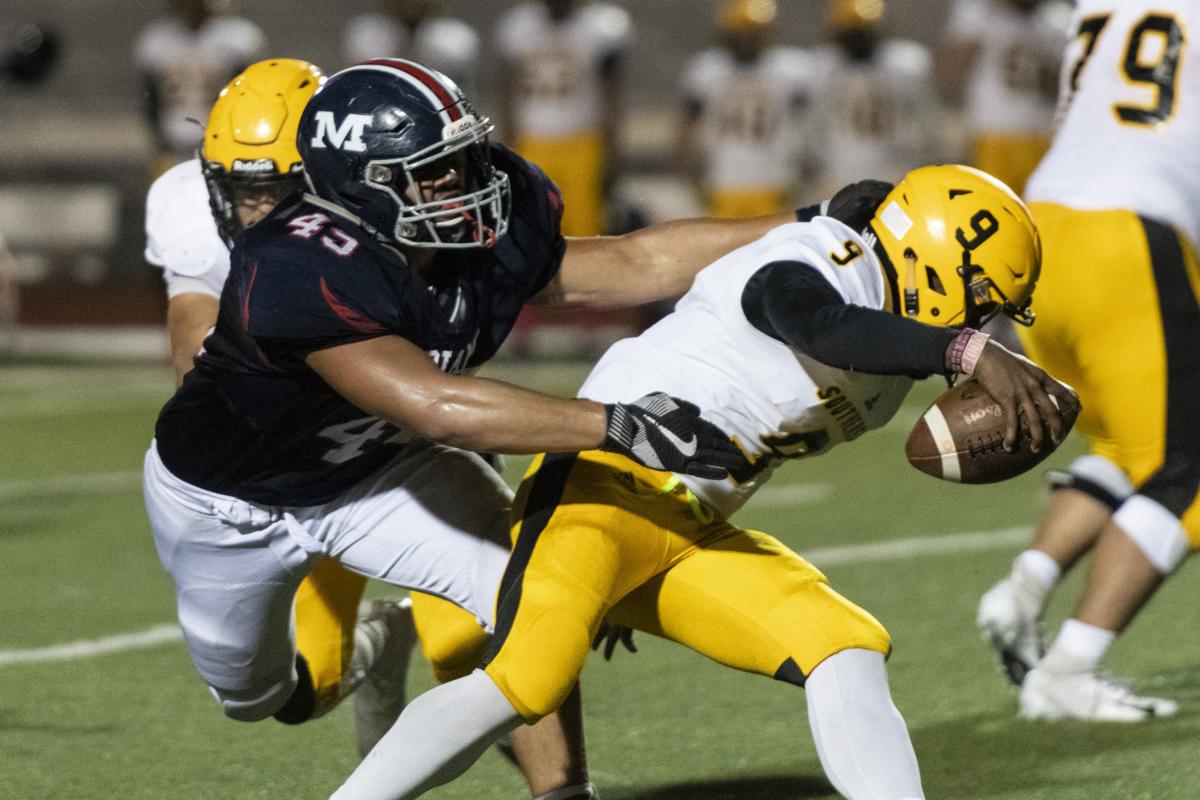 Manhattan sophomore defensive lineman Damian Ilalio (45) sacks Wichita Southeast junior quarterback Quinton Thomas (9) in the first round of the postseason. Ilalio and the MHS front seven have been a key factor in the team’s playoff run.

Manhattan senior running back Jaylynn Liggons (1) celebrates with senior wide receiver Gavin Kohn (3) after scoring a touchdown during the game against Wichita Southeast on Friday at Bishop Stadium. Manhattan defeated Wichita Southeast, 73-20, to open the postseason. The Indians will face Wichita West in the second round.

Manhattan senior running back Kevontae McDonald (21) dives into the end zone for a touchdown.

Manhattan sophomore defensive lineman Damian Ilalio (45) sacks Wichita Southeast junior quarterback Quinton Thomas (9) in the first round of the postseason. Ilalio and the MHS front seven have been a key factor in the team’s playoff run.

On the first play of Friday night’s game, Wichita Southeast startled everyone at Bishop Stadium.

Manhattan blew an assignment, Southeast wide receiver Braxton Davis got behind the secondary and quarterback Quinton Thomas hit him with a perfect pass. Eighteen seconds in, the No. 3 seed in Class 6A trailed by six at home against No. 14, which had just two wins entering the contest.

Over the next few minutes, the Indians responded with a 12-play drive where they converted two fourth downs. It ended in a 10-yard touchdown run by Kevontae McDonald. From there, MHS rolled.

The Indians scored 44 unanswered points in the first half and continued to pour on, winning 73-20 in a game that featured just about everything — big plays, weird plays and a ton of penalties, to name a few. With the victory, MHS advanced to the next round and will host Wichita West, which defeated Wichita East on Friday.

Let’s start with the absurd scoring. According to MaxPreps, the last time MHS scored this many points was Oct. 4, 2013, when it defeated Topeka West 76-0. On Friday, the Indians fumbled out of the end zone twice — resulting in touchbacks — and could’ve easily put up more points.

McDonald, who thought he crossed the goal line before fumbling out of the end zone, carried 31 times for 219 yards and three touchdowns. Once again, he set the tone, tearing up another opposing defense. To this point, the lowest total he’s rushed for in a game this season is 74 yards at Junction City.

The Indians are a run-heavy offense, but they featured their passing game Friday. Sophomore quarterback Dayne Aschenbrenner, who Schartz has lauded all season, was an efficient 7-for-11 for 137 yards and three touchdowns.

On one, he lobbed a perfect ball to senior Jaylynn Liggons, who caught it at the back of the end zone for a 22-yard score in the first quarter. He also threw a pretty pass downfield to Javon Peoples, who caught it and ran for a 54-yard touchdown in the second quarter. In the third, he rolled out right on a play-action play and threw a simple 5-yard touchdown pass to senior Chace McIlvaine.

The Indians had one return touchdown all season. Friday, they scored three.

Peoples scored on a 55-yard touchdown in the second quarter. Nate Harge took a kickoff 70 yards to the house in the third. In the fourth, BJ Young ran a punt back 46 yards to crack the 70-point mark.

“Sometimes, people ask why we spend so much time on special teams,” Schartz said. “Well, it’s for the playoffs, because a lot of teams don’t. When we get into the playoffs, that’s something that we can hang our hat on and count as a win for us.”

Schartz talked about wanting to see how his team performed when the competition ramped up. Perhaps he got a small taste Friday.

Then MHS landed a haymaker.

“We hung in there and we had our problems, but overall we hung together and overcame the adversity,” Schartz said. “Just have to get the work and clean up the mistakes. Just can’t perform that way and advance on into the playoffs.”

Schartz said he “knew there was potential” for those big plays. Southeast took advantage of a few blown assignments in the secondary, and Schartz said those must be cleaned up moving forward.

“It starts with more of a sense of urgency at practice,” he said. “Sometimes, the players give us this, ‘Yeah, we got this coach’ attitude. That’s just not acceptable — we have to make sure they have it down.”

But the defense also intercepted Thomas twice, and Reshon Moore made a heads-up play to fall on a backwards pass.

This game lasted about 2 hours and 30 minutes. If not for a running clock that began in the third quarter, it might have pushed the three-hour mark.

The scoring contributed to that, but so did a crazy amount of penalties. There were a hefty amount of personal fouls. The game became chippy at multiple points, and one Southeast player was eventually ejected.

“It’s the playoffs, the intensity is going to rise,” Schartz said. “Every team that comes in here — us or our opponents — they have seniors that, potentially, it could be the last football game of their life. When you put that type of situation, you’re going to have some intensity and some emotions boil over.”

Schartz thought that, once again this season, his team handled that aspect well. He said he tells his players that, “we want you to play hard, but we don’t want you to cross the line.”

That said, Liggons seemed to get caught in the crossfire. He appeared to hurt his arm on one play and didn’t return.

“It was an absolute late hit,” Schartz said. “It was probably five seconds after the whistle. They got tangled up and that’s how it got injured.”

The Indians are 8-1 this season, and seven of those victories have been blowouts. While they recognize they have issues to fix, there’s more positives than negatives. On Friday, they turned an early scare into a lopsided result.

After the game, McDonald stood outside the locker room and pondered the question: What don’t outsiders understand about his team?

Mark Smith back in rhythm as Missouri downs South Carolina