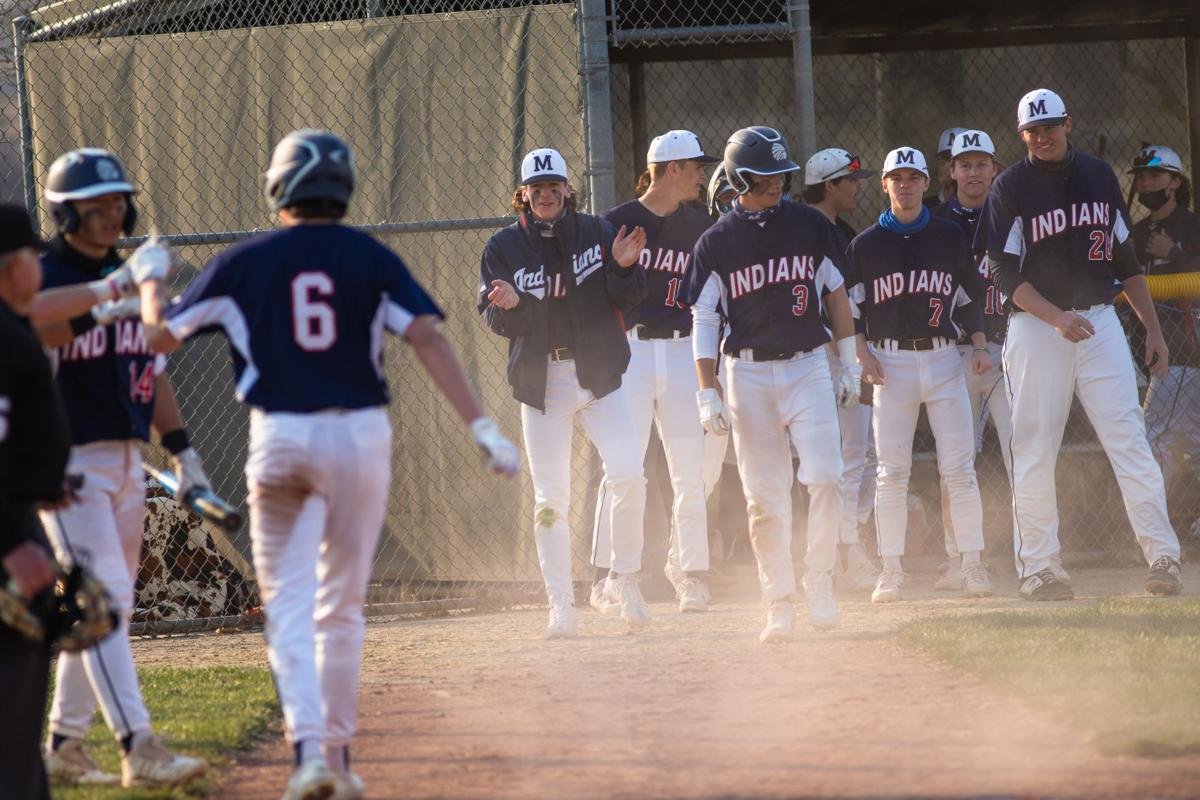 Manhattan celebrates outside of the dugout after Cade Perkins scored the go-ahead run in the Indians’ 3-2 win over Seaman on Thursday. The Indians and Vikings split the doubleheader 1-1. 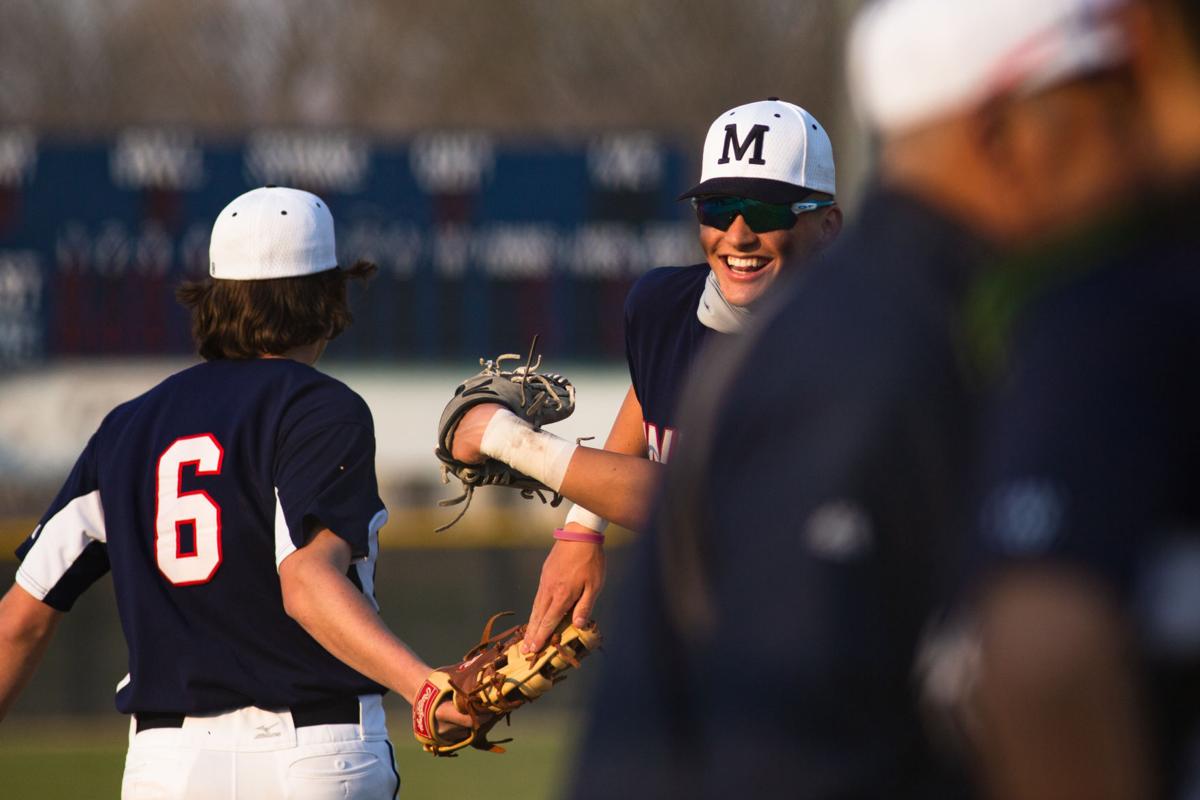 Manhattan celebrates outside of the dugout after Cade Perkins scored the go-ahead run in the Indians’ 3-2 win over Seaman on Thursday. The Indians and Vikings split the doubleheader 1-1.

With two outs in the seventh inning, the bases at Norvell Field were filled with Indians. Seaman’s pitcher looked stressed. The Manhattan player in the batter’s box wielded the power to change the game.

But like too many before him, Marccus Wallace couldn’t bring his teammates home. After Wallace lined out to first base, Cade Perkins, Jaxon Vikander and PJ Hughes sulked from the base paths to the dugout.

The Indians’ seventh-inning rally ended without a run.

The final scene from Manhattan’s 6-1 loss to Seaman on Thursday repeated itself too often during Game 2 of the Centennia League doubleheader.

The Indians left 12 runners on base against the Vikings, with each tally mark representing a missed chance.

On so many occasions, one hit could’ve changed the game. But when the opportunities arose, Manhattan couldn’t generate one.

“I think we need to learn how to compete a little bit harder at the plate,” Manhattan head coach Don Hess said. “You have to have an approach at the plate. Go up with a plan and execute it.”

Manhattan fell behind 3-0 after one inning and 5-1 after three.

But the Vikings offered the hosts several chances to trim those leads.

Seaman starter Cole Askew walked two batters and hit six more in three innings on the mound. Ian Luce and Braden Dinkel reached base in the first inning. Wallace and Hughes advanced to second and third base, respectively, in the second.

And the Indians scored their only run in the third, when Askew hit Cade McIlvaine with the bases loaded.

But all of the promising endings ended the same way as Manhattan’s seventh-inning rally: with disappointed baserunners trotting toward the dugout after an unsuccessful at-bat. Askew earned the win despite the erratic command he displayed. Perkins wore the loss after allowing five earned runs in three innings.

Hess expected more from his most experienced pitcher, but he expected the offense to support Perkins, too. Instead, the Indians finished with three hits compared to 13 strikeouts.

“We got up, fell behind in the count and went meekly back to the dugout,” Hess said. “When you’re behind in the count, you have to be able to foul off pitches and work counts and figure out how to scratch and claw a base hit out of it. I just didn’t think tonight we did a great job of that.”

Manhattan’s offensive struggles began during Game 1 of the doubleheader. Through four innings, the Indians couldn’t muster a hit off Seaman pitcher Kevin Mannell. Through five, the Vikings led 2-0.

Then Perkins delivered the kind of game-changing swing Manhattan spent most of the day hoping for. The junior lefty sliced a double down the left field line, which scored Dayne Aschenbrenner and Jack Campbell. One batter later, Perkins scored from second after a pitch squirted away from Seaman catcher Andrew Kirmer and toward the Manhattan dugout.

Perkins supplied all the offense Manhattan needed during its 3-2 win over Seaman on Thursday. To quote Hess, the Indians were “doing nothing” before Perkins’ double. But on a day when the Indians struggled to muster offense, their junior first baseman reminded them how much one hit can mean at the right time.

“To be able to throw a 3-spot up when we really needed it says a lot about what we want to accomplish,” Hess said. “Now we just need to be able to do it consistently.”

Hess is hoping for steadier performances from the pair of pitchers he used in Game 1, too. Aschenbrenner, a senior who the Indians are “experimenting with” as a starter, walked four batters in four innings. Sophomore Ian Luce, who earned his first varsity win in relief of Aschenbrenner, walked five in three innings.

Both pitchers deserve credit for wriggling free from the jams they created. Luce and Aschenbrenner only allowed one run apiece. But Hess was more concerned with their process than the results.

“We threw too many pitches,” Hess said. “We’re going to have to count on both of them. Dayne started out real good, and Ian had some good periods. But we were just behind in the count all night long.”

Manhattan decided before the season that it would not use its youth as an excuse for inconsistency. But counting the underclassmen on its roster does would explain the highs and lows the Indians vacillated between on Thursday.

Hess started six first-time varsity players against Seaman, three of which were underclassmen. The Indians nearly fielded a lineup’s worth of first-game jitters.

After splitting with Seaman, however, the young Indians have been baptized. Hess knows he can’t alleviate every uneven attribute his team showcased Thursday, but he expects to see incremental progress at 4 p.m. Monday, when the Indians play at Topeka.

He needs to, really. The Indians don’t have many veterans to lean on.

So the faster the youngsters mature, the sooner Manhattan can reach its potential.

“Now we’ve been through it,” Hess said. “We’ve seen some of our flaws and some of the things we do really well. This is an opportunity for us to learn and hopefully get better before Monday.”

Saluki Football | 3 things to watch in No. 17 Southeastern Louisiana/No. 18 SIU