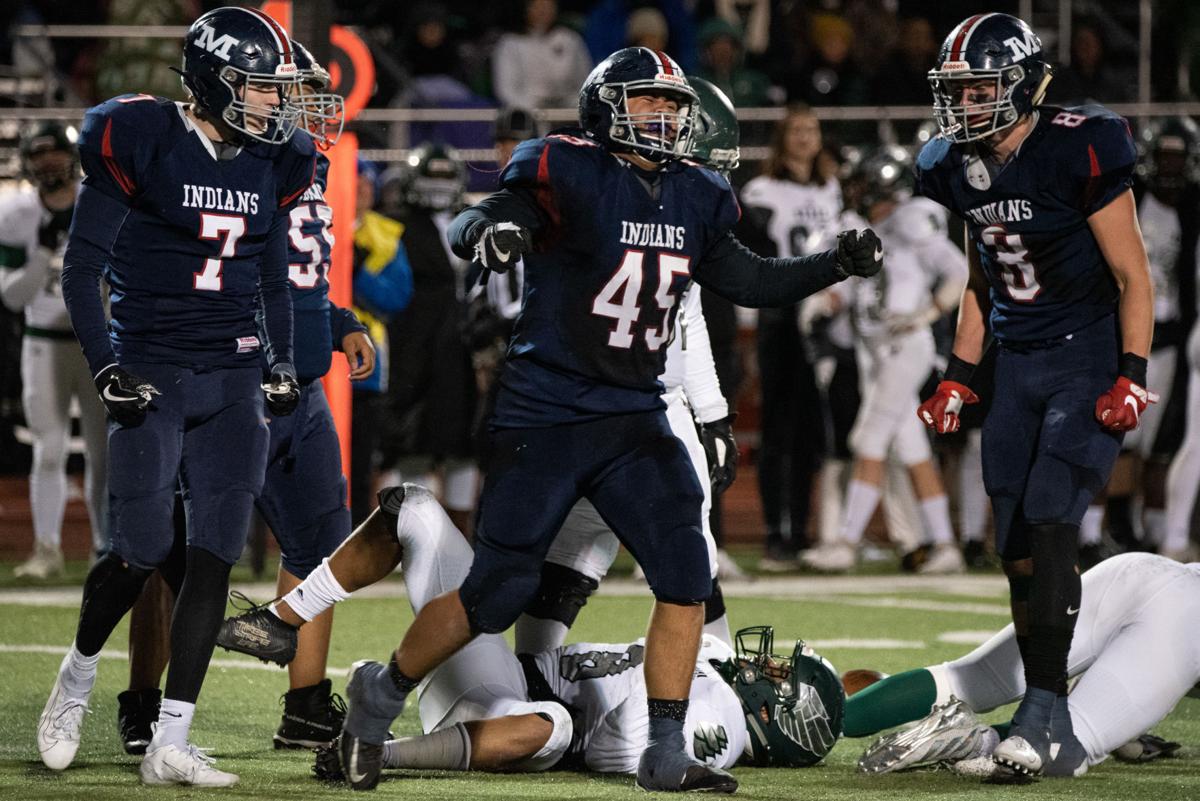 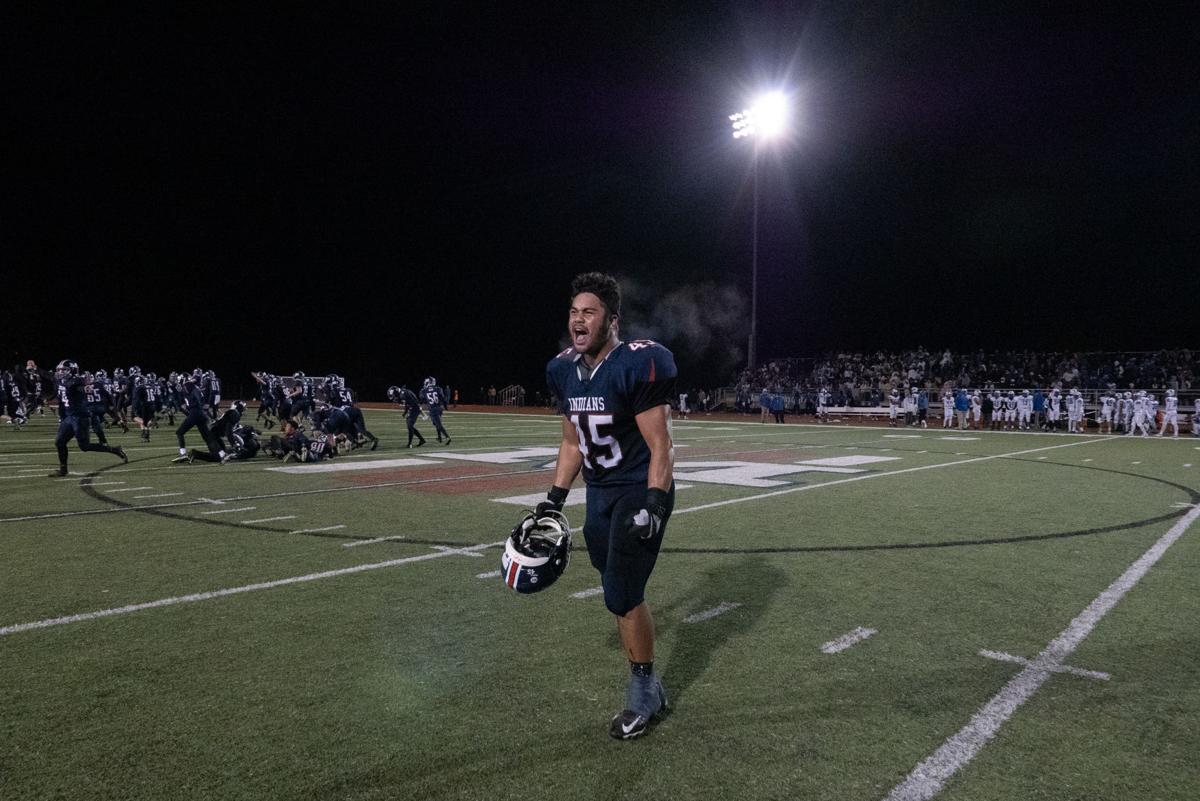 Manhattan High defensive lineman Damian Ilalio (45) celebrates the team’s 31-28 win over Junction City on Oct. 11. Ilalio is picking up steam on the recruiting trail and has nine offers.

Manhattan High defensive lineman Damian Ilalio (45) celebrates the team’s 31-28 win over Junction City on Oct. 11. Ilalio is picking up steam on the recruiting trail and has nine offers.

Damian Ilalio’s name is beginning to extend far beyond the white lines of Bishop Stadium.

Ilalio, Manhattan High’s star defensive tackle, has been racking up offers in recent weeks from schools across the country. Heading into his senior season, Ilalio already has a scholarship waiting at nine different schools and has heard from a number of others that have yet to offer a scholarship.

“I have a lot of coaches I talk to, even from colleges that haven’t offered me,” Ilalio said. “I talk to coaches day in and day out. At least two or three a day. It’s a pretty busy thing. I try to keep up with all the things.”

The offers are the result of consistent improvement from the time Ilalio started playing football in third grade. While the physical talent has been there from the start, according to MHS defensive coordinator Adam O’Neill, it’s been fine tuned by the mental strength Ilalio possesses.

“He works his tail off,” O’Neill said. “He’s a leader on and off the field. He pulls kids with him. He became an extra coach on the field and will be vocal and he helps with his family at home and helps the younger defensive lineman.”

O’Neill, who helped Ilalio earn his first offer from Illinois State by sending the coaching staff Ilalio’s recruiting tape, first encountered the defensive lineman when Ilalio was a sophomore.

During O’Neill’s first summer in Manhattan, he watched Ilalio rag-doll offensive linemen for the first time. O’Neill immediately was struck by the then-sophomore’s advanced hand skills, which typically are an area of weakness in younger defensive linemen.

“He’s understood his strength,” O’Neill said. “Initially, it was a lot of force and he could just move people. But he’s gotten better, he’s gone to camps, we’ve watched tape and film and when to use force versus speed with what the offense is trying to do and using that against them. He’s got a lot better with technique.”

“Illinois State, when I got in touch with them and shared his film, they immediately jumped on him,” O’Neill said. “In fact, the first question was, “‘hat’s wrong with him? Why doesn’t he have more offers?’”

As the offers continue to stack, Ilalio is working overtime to research each of the schools and how he could fit in both athletically and academically. Ilalio possesses a 4.0 GPA and is a member of Manhattan’s National Honor Society. For him, a school must be a full package of athletics and academics to meet his own requirements.

“I do research on the schools myself, looking up academics and things about their teams,” Ilalio said. “I watch their games. I do a lot of research and when my total evaluation is done, I’ll see who I lean toward.”

At this moment, the schools ranking near the top of Ilalio’s list include Illinois State, Army and Air Force.

Illinois State finished last season as the No. 7 team in the FCS. The Redbirds consistently rank as one of the top teams in the division and have given fits to their FBS counterparts in recent years, including a 35-19 win over Colorado State in 2018.

Army and Air Force also provide interesting options. Both are top academic schools that consistently punch above their weight at the FBS level. In recent years, Army has taken both Michigan and Oklahoma to overtime and finished the 2018 season ranked No. 19 in the Associated Press poll. Air Force finished last season 11-2, with wins over Colorado and Washington State.

Both teams have won bowl games in the last two years.

The schools that have offered Ilalio aren’t the only ones in contact with the defensive tackle.

He also has spoken with Kansas State.

“I stay in contact with lots of the coaches,” Ilalio said. “I actually know the new defensive line coach, our families know each other. I keep in contact with the (other) K-State coaches as well. They do a great job sending me letters, and I really appreciate the handwritten letters. That’s something not a lot of people do but it stands out for them.”

However, despite the number of coaches vying for Ilalio’s commitment, the defensive lineman is content to keep them waiting.

With the coronavirus canceling many of the summer showcases Ilalio planned to attend, he will have to wait longer for other schools to notice him. It’s a stroke of bad luck, as some college coaches who might have become interested in him now are less likely to have time to watch him in person.

“I think he’d have exploded this summer if we didn’t have all the stuff going on,” O’Neill said. “He could go to the camps and work out in front of coaches. He’s a little bit short, and I think that’s held him up a little bit.”

Instead, Ilalio will have to rely on performing at a similar or even higher level than he did last season if he wants word of his abilities to spread. He’ll need performances like he had during Manhattan’s wins over Emporia and Lawrence-Free State.

In both games, Ilalio was matched against up against one of the state’s top offensive tackles. Against Emporia, Ilalio faced Hayden Pauls, a three-star recruit according to 247Sports, who signed to play for Iowa State. Free State paired him with Turner Corcoran, a four-star recruit and 247Sports’ No. 47 overall recruit in 2020. He signed to play with Nebraska.

“He stood out in the Emporia and Free State games last year with those big offensive tackles,” O’Neill said. “Emporia didn’t spend very long after the first quarter running to his side. He impacted the Free State game that way, too. Those were linemen we had a lot of respect for and their coaching staff, too. They both run the ball really well and Damian was a big impact on that.”

Since he will have to wait to showcase his skills, Ilalio also will hold off on official visits. Part of his delay is due to NCAA rules, which extended the nationwide recruiting dead period through July 31. It is also because he doesn’t want to spend all of his visits before he knows what offers might come in the future.

When Ilalio does make his decision, he wants to make sure he has made the right decision. After all, he will have quite a few options to chose from.

“For me, I always thought I wouldn’t make a decision until the last minute,” Ilalio said. “Not because I’m lazy, but I wanted to have as much time as possible to evaluate everyone, just in case something changed last minute and I couldn’t go to a school for some reason. I want all the time I’m given to make a good decision for my future.”