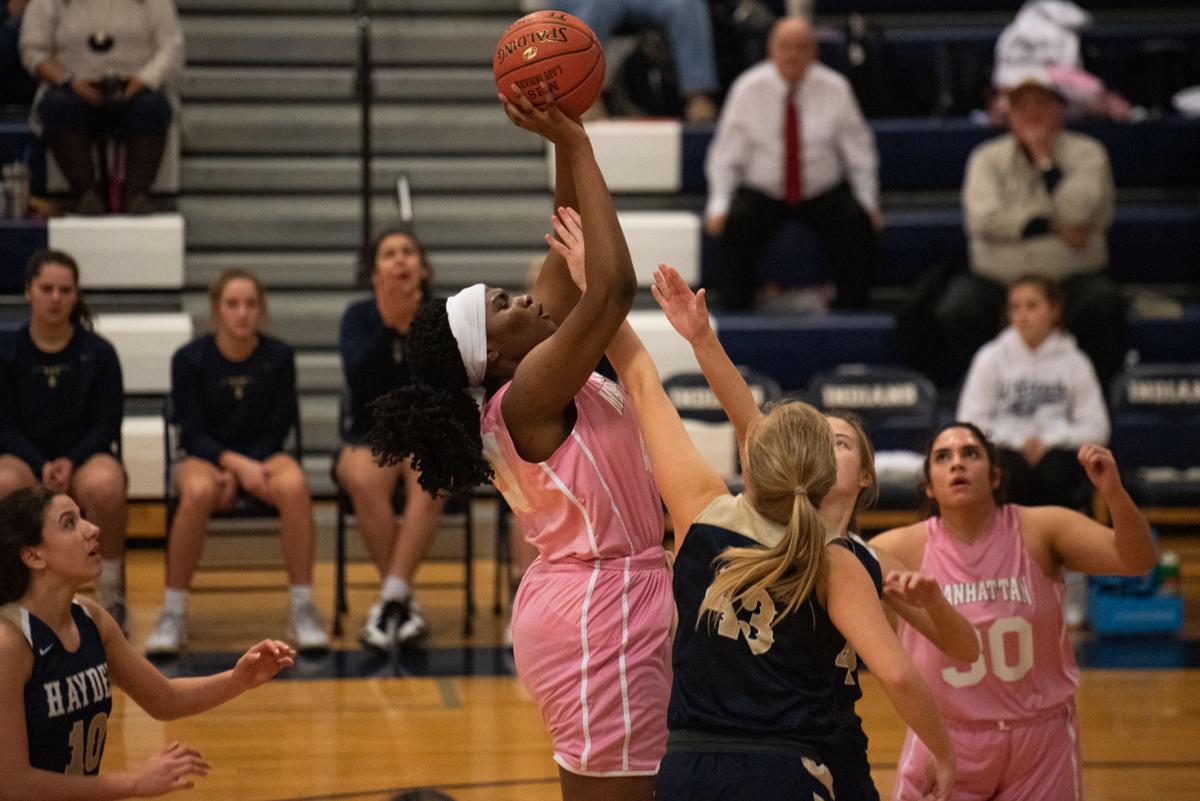 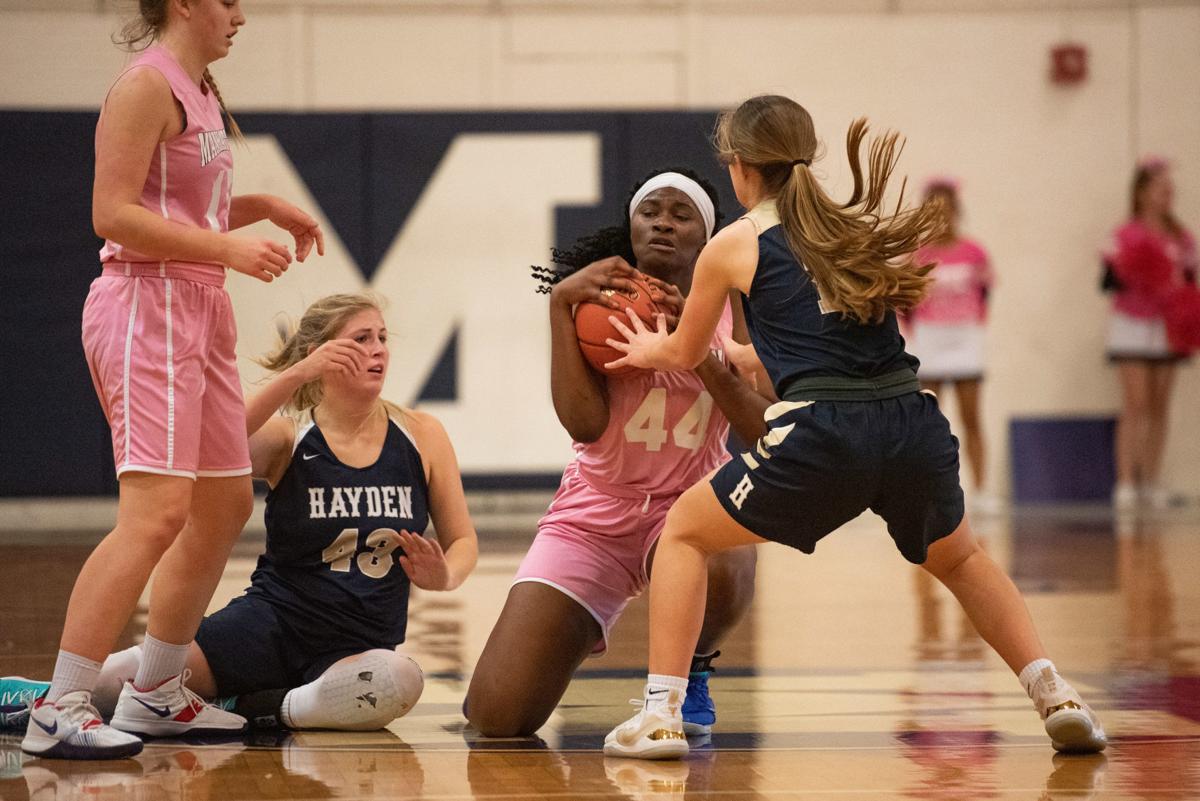 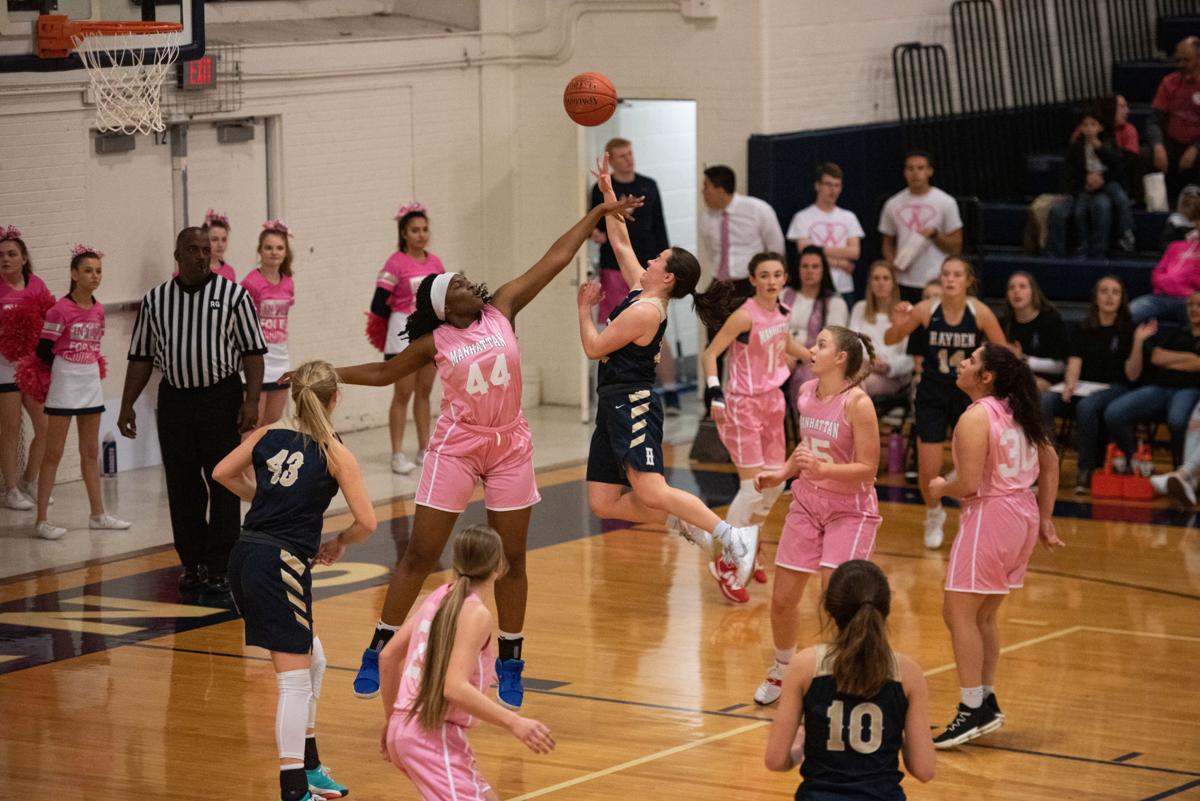 Sophia Purcell (32) attempts a shot while being guarded by Zanaa Cordis (44).

Sophia Purcell (32) attempts a shot while being guarded by Zanaa Cordis (44).

The Manhattan girls basketball team is going to stick with its game plan until an opponent can stop it.

The Indians will work the ball down the court, wait until Zanaa Cordis establishes a favorable position in the post, give her the ball and watch as their point total increases.

It’s what MHS did all through the first half of its 41-36 win over Hayden Friday night.

Even with Taylor Claussen sitting on the bench for much of the first half with foul trouble, the Indians didn’t have any issues putting points on the board in bunches thanks to Cordis. The 6-foot-3 senior poured in 17 points on 8-for-8 shooting in the half as Manhattan took a 25-11 lead.

“In practice, we take those shots all the time,” Cordis said. “I just know those are my shots, so I’ve got to put them in.”

However, while the initial game plan worked throughout the first half, it largely was stymied in the second half because of a mix of tactical changes and foul trouble forcing Cordis off the court.

Almost as soon as the second half started, Hayden employed a full-court press while simultaneously double teaming Cordis any time she entered the post. The pressure made it harder for the Indians to advance the ball to the center, while the double team swarmed her whenever the ball touched her hands.

To make matters worse, Cordis picked up her fourth foul with just over six minutes left in the game, which forced her to the bench. There, she joined Claussen, who had been confined to the sideline since the 6:06 mark of the third quarter after picking up her fourth foul.

Without its main scorer, Manhattan made a 180-degree turn in its game plan. Instead of forcing the ball into the post, the Indians remained content in dribbling and passing the ball around the perimeter, taking advantage of playing without a shot clock.

“We did some things we really weren’t planning on doing,” MHS head coach Scott Mall said. “We wanted to run some clock and take a little more time and got a little carried away.”

The strategy was a dangerous one, as the Wildcats began making shots while the Indians hit a cold stretch at the free throw line. Three consecutive misses in the bonus put Manhattan’s lead in danger.

Mall picked up on the peril his team was in.

His answer: Send Cordis back onto the floor.

The senior paid off her coach’s trust by blocking a shot with 30 seconds remaining in the game, drawing a foul and sinking both of her free throws to seal the game.

The win is the Indians’ second in as many games. Heading into the final four games of the season, Mall hopes his team can take lessons away from Friday night as it moves forward.