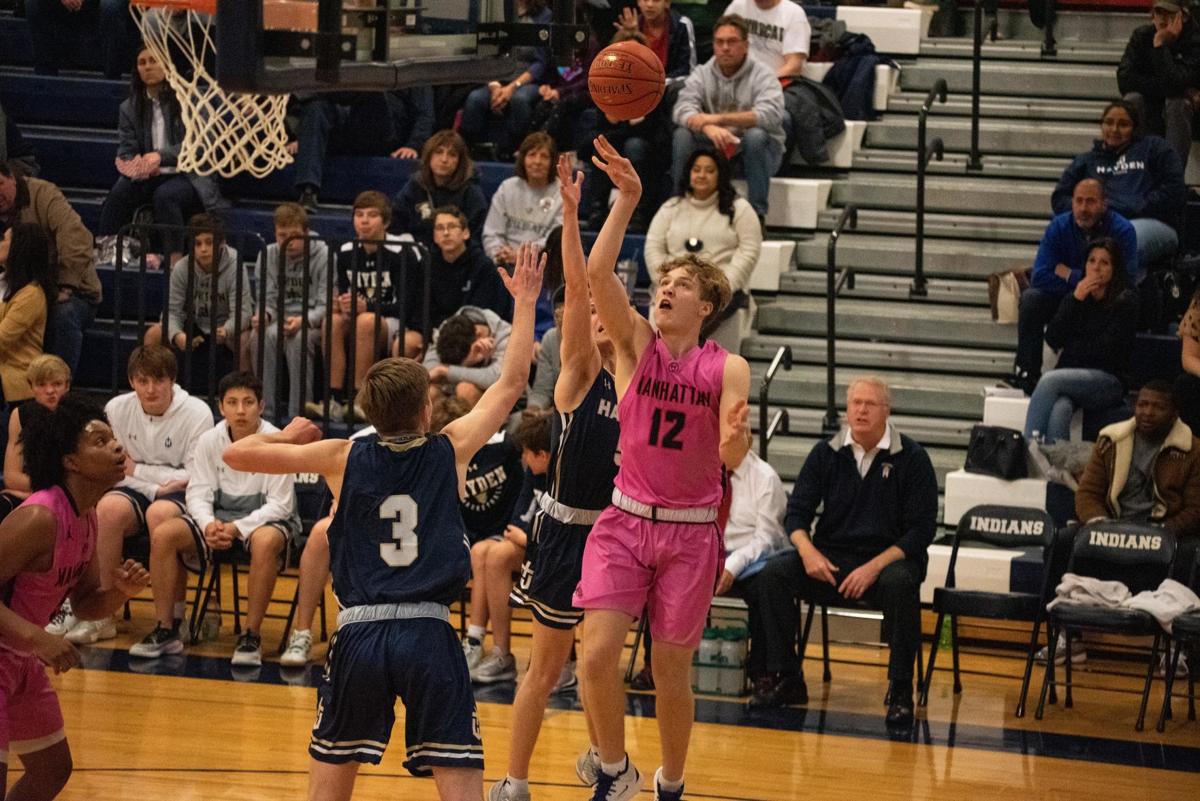 Manhattan’s Owen Braxmeyer (12) attempts a shot while being guarded by Hayden’s Cade Pavilk (3) during Friday’s game. He scored a game-high 18 points in the Indians’ 53-51 overtime win. Braxmeyer went 4-for-4 from the free throw line in overtime. 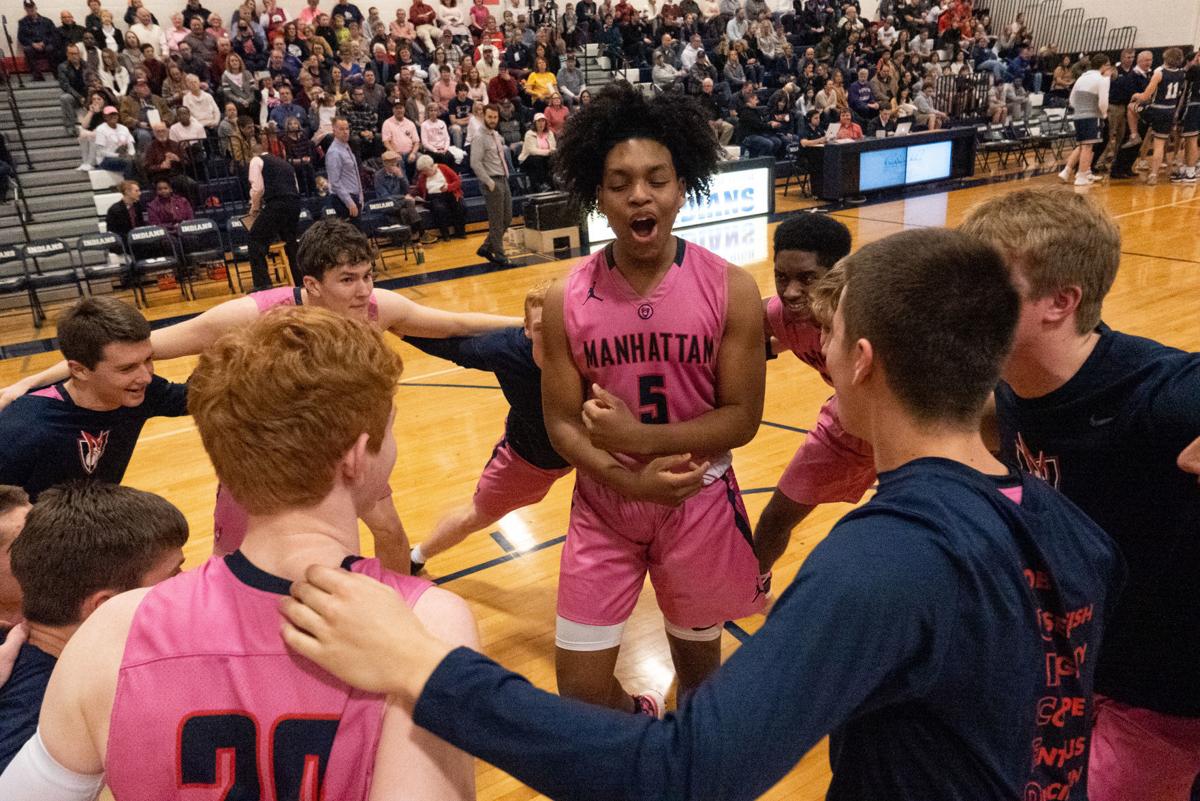 Manhattan junior Raeshon Riddick (5) hypes up his team in the huddle before Friday’s tipoff against Hayden. Riddick scored seven points in the 53-51 victory for MHS.

Manhattan’s Owen Braxmeyer (12) attempts a shot while being guarded by Hayden’s Cade Pavilk (3) during Friday’s game. He scored a game-high 18 points in the Indians’ 53-51 overtime win. Braxmeyer went 4-for-4 from the free throw line in overtime.

Manhattan junior Raeshon Riddick (5) hypes up his team in the huddle before Friday’s tipoff against Hayden. Riddick scored seven points in the 53-51 victory for MHS.

He’d just watched his team shoot 35% from the field. Never mind that the Indians were facing Hayden, which had won just three games heading into Friday night’s matchup. Manhattan, the No. 10 team in Class 6A in the latest Kansas Basketball Coaches Association poll, was on the wrong side of a 19-16 scoreline.

MHS looked passive at times in the half, utterly inept in others. It wasn’t the team George had grown accustomed to coaching over the course of the season.

“We got into (the players),” George said of his halftime speech. “You’ve got to do that sometimes. Credit to our guys, they came out and responded.”

The Indians exploded for 17 points in the third quarter on the backs of Antonio Barron and Owen Braxmeyer to take a 33-24 lead. MHS also held Hayden to just 17% shooting, including an 0-for-4 showing from beyond the arc.

“Going into (the locker room), I wouldn’t say we were down, but weren’t being ourselves,” Braxmeyer said. “(George) said we need to play more confident and trust each other. We came out and did that.”

Yet looking back on the Indians’ narrow 53-51 overtime victory Friday night, the third period was the only time in which Manhattan put together a complete quarter.

With a healthy lead heading into the final period, Manhattan again fell into the trap that had made George so angry earlier in the game. Only this time, the defense followed the offense.

While MHS converted 36% of its opportunities, Hayden shot the lights out to climb back into the game. The Wildcats knocked down 89% of their fourth-quarter field goal attempts, including four 3-pointers. Cade Pavlik provided one such triple to tie the game with 5.2 seconds left in regulation.

On the ensuing possession, Chandler Marks’ game-winning attempt was off the mark, sending the contest to overtime.

Following Pavlik’s shot, Manhattan’s confidence level had every reason to drop. For moments, it looked like it had, with the Indians passing up multiple open looks to start the overtime period.

However, after a few labored possessions, MHS found its cure in Braxmeyer. The junior coolly took over, driving into the lane to pick up one foul while being intentionally fouled another time to earn his trip to the charity stripe.

He converted all four of his overtime free throws, finishing with 18 points on 6-for-9 shooting.

“He’s mature enough now and has enough experience now to kind of know how to play in those situations,” George said. “I thought he was very composed and his decision making was good in the second half.”

While the win wasn’t decisive, it was a step in the right direction for a team that just a couple weeks ago lost back-to-back close games against Topeka West and Topeka High.

Now, the Indians are riding a three-game winning streak heading into the final four games of the regular season. Their last two wins have come by a combined four points.

Braxmeyer said the overtime triumph was a shot in the arm for the Indians, especially into next week, when they face Washburn Rural and Topeka High.

“It just builds our confidence every day,” Braxmeyer said. “This one’s a big confidence booster.”