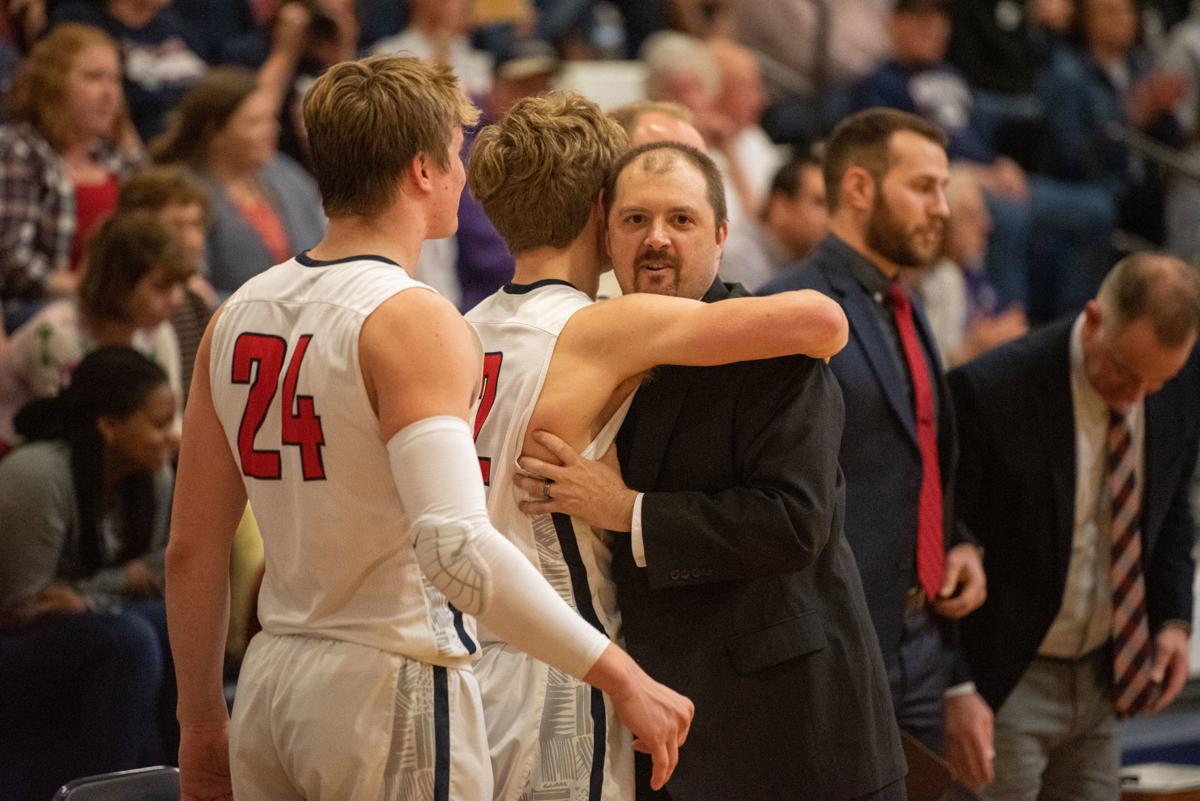 Manhattan head coach Benji George hugs Owen Braxmeyer as the time runs out on the clock. MHS topped Wichita West 56-39 at home Saturday night in the sub-state championship game. With the victory, the Indians move on to the Class 6A tournament in Wichita next week. It marks Manhattan’s first state tournament berth in three years. 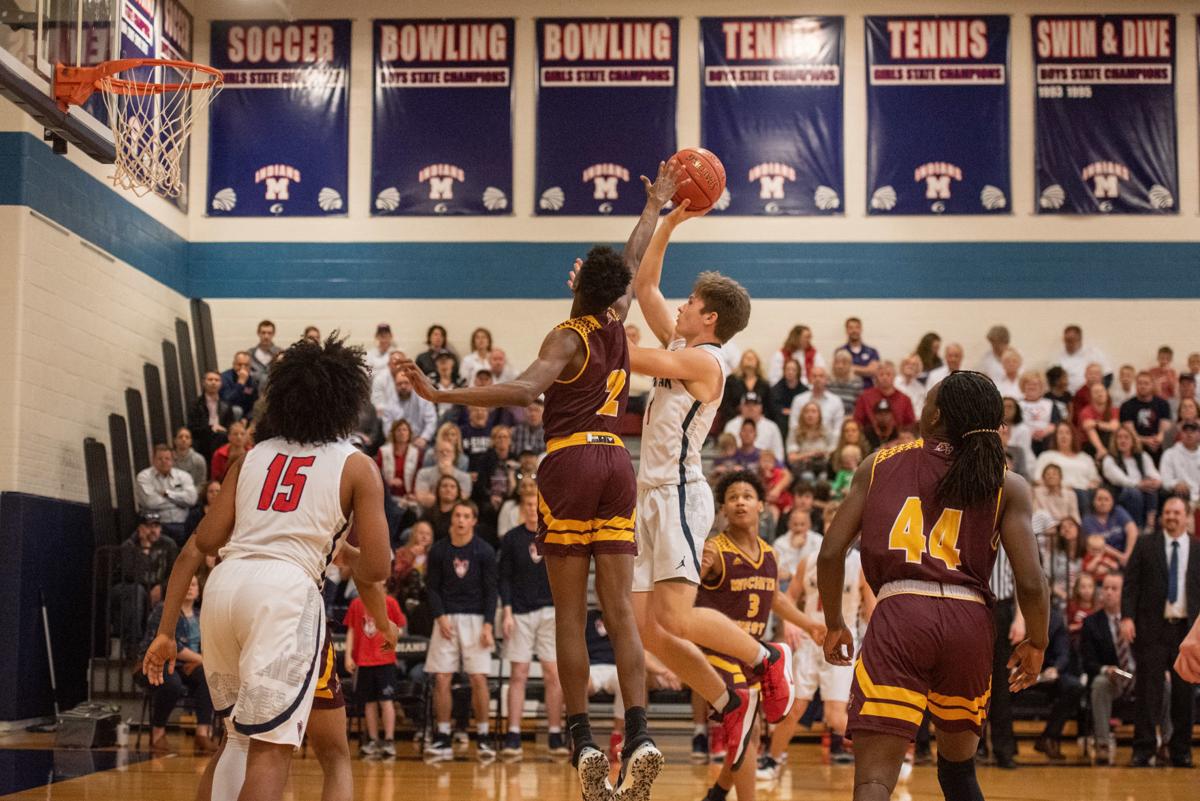 Manhattan’s Peyton Weixelman (1) attempts a layup while being guarded by Jaylin Henderson (2) on Saturday.

Manhattan head coach Benji George hugs Owen Braxmeyer as the time runs out on the clock. MHS topped Wichita West 56-39 at home Saturday night in the sub-state championship game. With the victory, the Indians move on to the Class 6A tournament in Wichita next week. It marks Manhattan’s first state tournament berth in three years.

Manhattan’s Peyton Weixelman (1) attempts a layup while being guarded by Jaylin Henderson (2) on Saturday.

The Manhattan boys’ basketball team didn’t have to change anything to clinch its first state tournament berth in three years.

The Indians didn’t try to speed their game up to catch Wichita West napping during Saturday night’s game. Nor did they force the ball through one player’s hands every time down the floor in hopes he would heat up.

No, MHS won the sub-state championship the way it normally won this season: The Indians played harder than their opposition defensively and shared the ball on offense as often as they could.

It was enough to knock off West 56-39 and clinch a trip to the Class 6A state tournament, which begins in Wichita on Thursday.

Saturday’s performance was miles away from where the Indians were just a few short weeks ago. That was when they were in the middle of a three-game losing streak. Offensively they were inconsistent, with one player scoring and others watching throughout the game. Defensively, they were caught off guard too often to keep opponents within reach.

But something changed as MHS prepared for the sub-state tournament. Suddenly, the Indians’ offense was flowing, with every player who took the floor contributing. Defensively, the turnovers returned, allowing MHS to get out on fast break and swing possessions back in its favor.

“It was just sticking with it,” Manhattan head coach Benji George said. “Once we felt like (the) league and league title slipped away, I think as we got closer to the playoffs, that helped us get refocused.”

On Saturday, it was the defense that kick started Manhattan’s bid for a state tournament berth.

The Indians opened with a taller lineup, consisting of Marks, Tyce Hoover and Raeshon Riddick. They knew West struggled in the past shooting the ball from deep, and the taller lineup would force the Pioneers to try to do just that.

The height inside provided a safety net for Manhattan’s guards, allowing Mitch Munsen and Owen Braxmeyer to aggressively pursue steals. The Indians executed their game plan to near perfection, forcing seven first-half turnovers.

“We felt like we could really guard them,” George said. “I knew it wasn’t going to be 69-67, poetry in motion all the time. I thought we did a good job grinding it out.”

But despite Manhattan’s defense holding West to 30% shooting through the first three quarters, it still was a 33-27 game heading into the final period. Manhattan’s offense had struggled to find its rhythm, with a different player leading the way in each quarter while others struggled to find the net.

In the fourth quarter, however, the offense finally started to click. Six different players scored as MHS shot 56% from the field.

“Now we’re bouncing back and better than ever,” Marks said. “Playing connected, playing together and playing for each other. We have eight seniors who play for each other and know it’s our last time together. It’s all out.”

The uptick in offense did little to take away from Manhattan’s defensive effort. West made just four of its 12 shot attempts, finishing the game shooting 31% from the field.

As Manhattan’s lead grew, the Pioneers became more frustrated, drawing two technical fouls in the fourth quarter. The extra free throws further accelerated the Indians’ offense, as they dropped 23 points in the final quarter to seal the victory.

Now, the Indians’ turn their attention toward Wichita for the state tournament. Manhattan will learn its placement in the bracket Sunday morning.

“We’ve got to take it one game at a time,” Marks said. “We’ve got to find out who we play first and then go one play at a time. Every game is the state championship from here on out.”