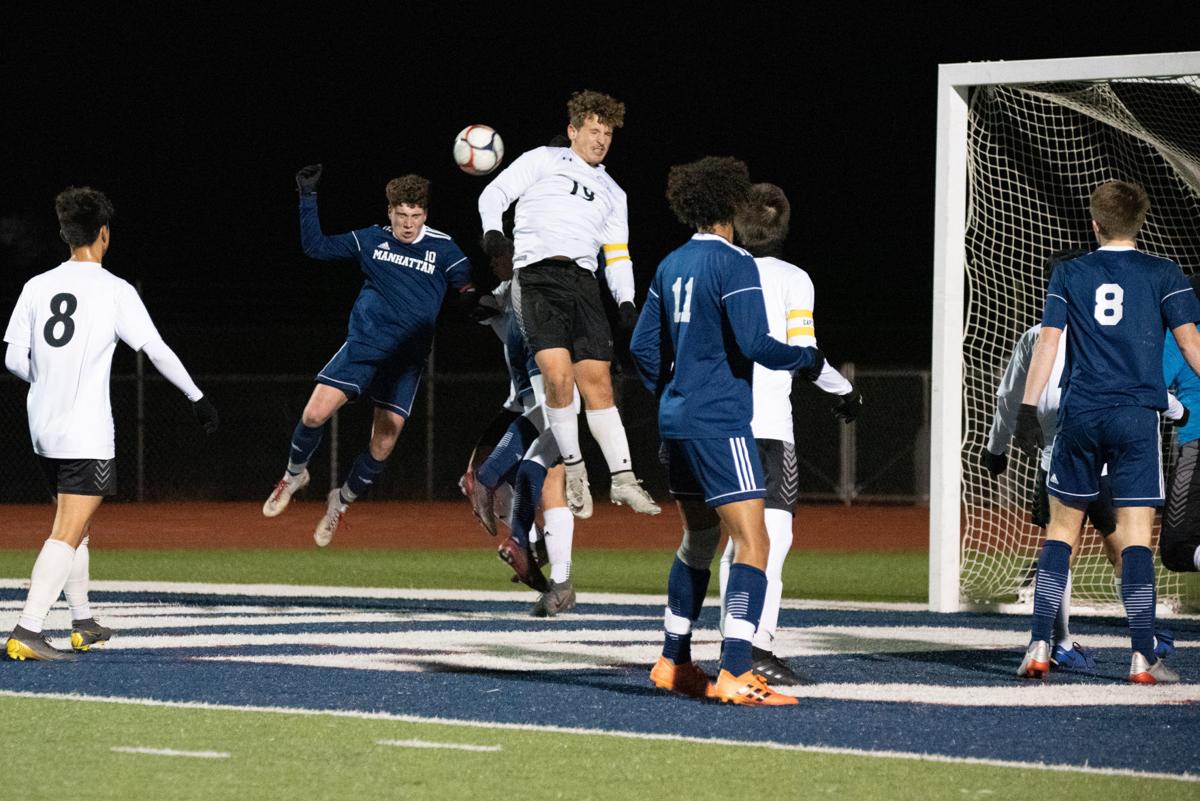 Manhattan High’s Hunter French (10) heads the ball in for a goal that was set up by Carter Wiens’ corner kick. The Indians escaped with a 2-1 win to move on to the regional championship, where it will face top-seeded Wichita East. 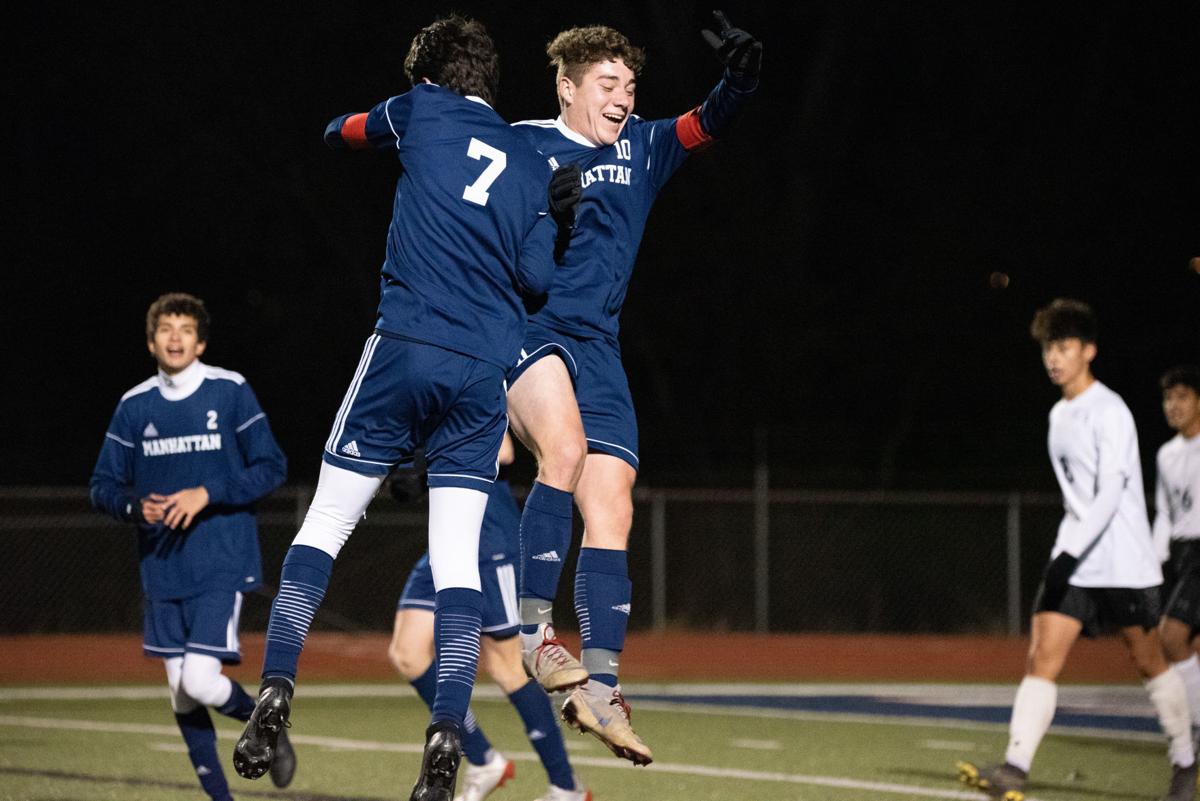 Manhattan High’s Carter Wiens (7) and Hunter French (10) celebrate after French’s header. The goal, which came at the 25-minute mark, was the go-ahead score in a 2-1 win for MHS over Haysville Campus.

Manhattan High’s Hunter French (10) heads the ball in for a goal that was set up by Carter Wiens’ corner kick. The Indians escaped with a 2-1 win to move on to the regional championship, where it will face top-seeded Wichita East.

Manhattan High’s Carter Wiens (7) and Hunter French (10) celebrate after French’s header. The goal, which came at the 25-minute mark, was the go-ahead score in a 2-1 win for MHS over Haysville Campus.

On a brisk Tuesday night at Bishop Stadium, Manhattan High senior Hunter French jogged over to fellow senior Cartier Wiens, who was about to attempt a free kick in a 6A playoff matchup with Haysville Campus.

The game was tied 1-1 midway through the second half, and French, a forward, knew he could take advantage and potentially give his team the lead.

So French asked his teammate a favor.

Wiens obliged. His looping free kick landed squarely in the top left shelf, where French headed it in, good for the go-ahead goal in Manhattan’s 2-1 win over Haysville Campus.

With the win, Manhattan (12-5) advances to the championship game of its 6A regional bracket, facing top-seeded Wichita East Thursday afternoon in Wichita.

“We’ve done it in the past,” French said. “We’ve just got a good connection with each other.”

Wiens made a living on his connections Tuesday night, and not just to French. He assisted on Manhattan’s first goal, scored by junior Michael Ohler in the first half, when Wiens broke away from the pack and hit a wide-open Ohler on the right side.

Ohler did the rest and fired it into the back of the net.

That gave the Indians a 1-0 lead, but the Colts weren’t done.

Haysville Campus came right back early in the second half. Alec Hinojos lined up for a corner kick, and he sent it into the middle of a scrum in the middle of the box.

Eventually, the ball found the foot of Alaa Al-Amood, who chipped it into the top shelf of the net, past Manhattan keeper Caleb DeLoach.

The Colts had leveled the game at 1-1.

“Set piece,” Manhattan coach Mike Sanchez said. “They played the ball in. Our initial clearance wasn’t good, and we got caught standing. Just left a guy open right there to just bury it. We can’t have those things happening right now, at this stage in the season where we are.”

Sanchez, as it turned out, wasn’t pleased. The lapse is correctable, he said, but it’s playoff time. Against Wichita East, which beat Manhattan 2-0 earlier this season, such a mistake could prove catastrophic.

“That’s a learning thing,” Sanchez said, “but at the same time, at this stage, it’s costly.”

Fortunately for the Indians on Tuesday, they had a plan in place.

Manhattan will now face another familiar foe in Wichita East. The Aces (16-1) have given nearly everybody on their schedule problems this year, the Indians included.

Here’s one change Sanchez is hoping his team can take advantage of on Thursday: The field surface. When Manhattan played East back in September, the game was played on a neutral grass field.

That was unfamiliar territory — literally — for the Indians, who have grown accustomed to Bishop Stadium’s turf field.

This time around, Manhattan will play on East’s turf field.

Beyond that, Sanchez said he thinks his team has improved in ways the playing surface can’t affect. That, Manhattan is hoping, will result in another win.

“We’ve made some adjustments,” Sanchez said, “and I think everybody has a good understanding of what we expect as a team, and how our play should be from start to finish. I think at the beginning of the year, I don’t know if we didn’t really know who we were or what our identity was, but I think we do now. It’s going to help us come Thursday.”

Former Arizona Wildcats DC Marcel Yates gets a new job, and it's in the Pac-12