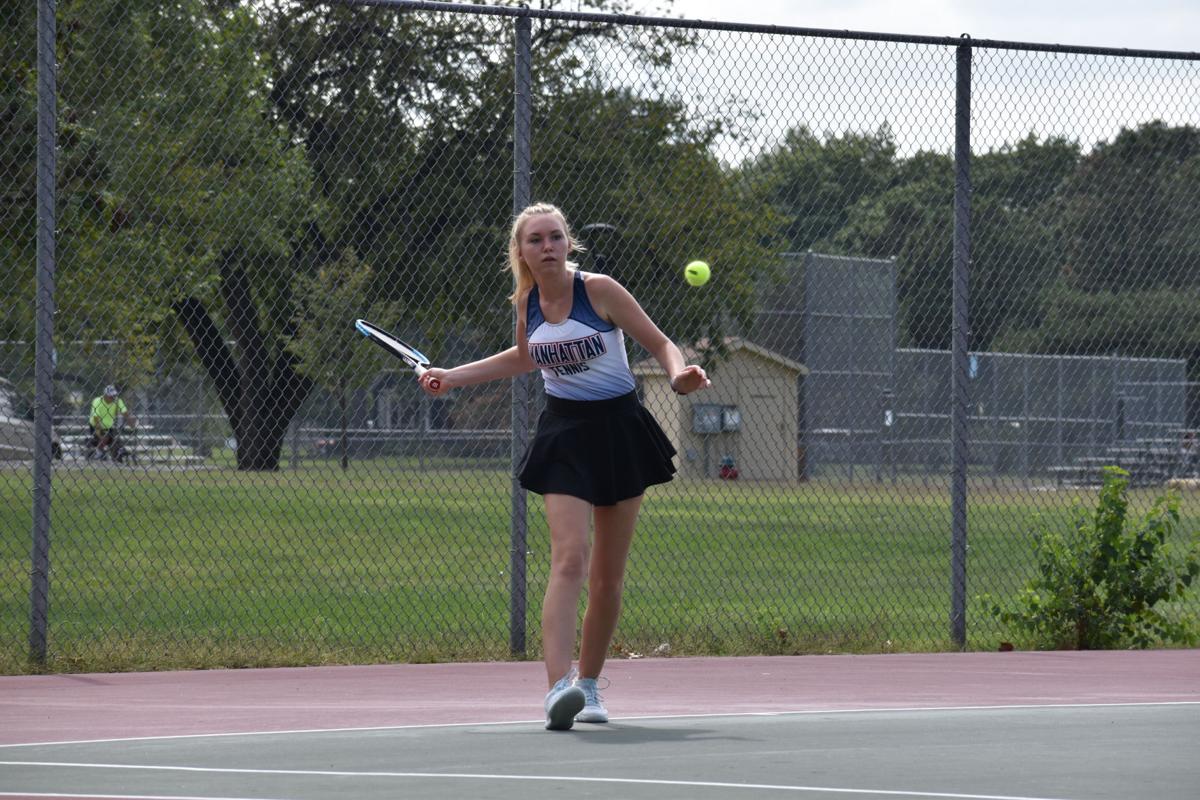 Manhattan No. 1 singles player Jillian Harkin hits a ball back to her opponent Sept. 15 at the City Park tennis courts in Manhattan. Harkin remained undefeated on the season following Tuesday’s Washburn Rural Invite. 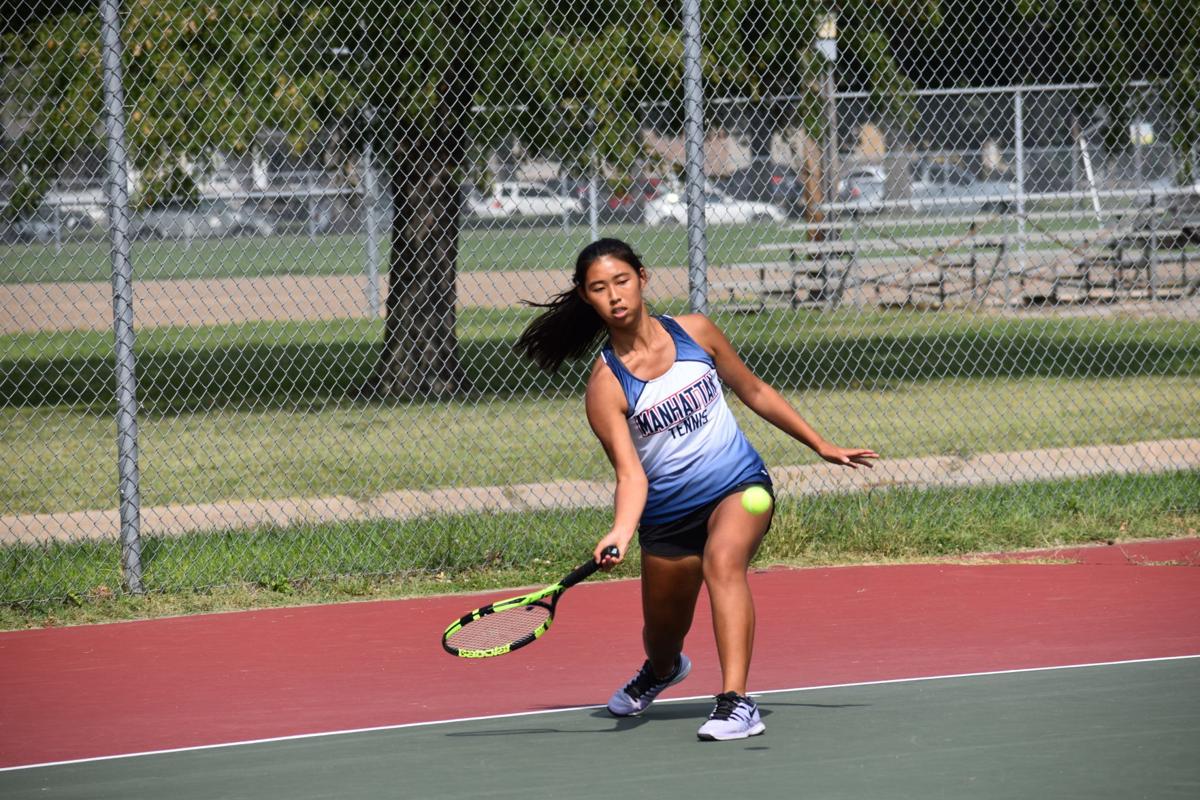 Manhattan No. 2 singles player Kayla Lei hits a ball back to her opponent Tuesday at the City Park tennis courts in Manhattan. Lei won all three of her matches against Junction City, Marysville and Washburn Rural, respectively.

Manhattan No. 1 singles player Jillian Harkin hits a ball back to her opponent Sept. 15 at the City Park tennis courts in Manhattan. Harkin remained undefeated on the season following Tuesday’s Washburn Rural Invite.

Manhattan No. 2 singles player Kayla Lei hits a ball back to her opponent Tuesday at the City Park tennis courts in Manhattan. Lei won all three of her matches against Junction City, Marysville and Washburn Rural, respectively.

Jillian Harkin almost looked bored at times as she walked through her opponents Monday at Manhattan’s City Park tennis courts.

Harkin, Manhattan High’s No. 1 singles player, lashed ball after ball over the net at her unfortunate counterparts, who often could do little to return it, let alone touch it.

Harkin has built a habit of making her opponents look helpless despite being only a sophomore. After finishing third in the singles portion of the 2019 Class 6A state tournament as a freshman, Harkin is on a mission to show the best is yet to come.

“I’m feeling pretty confident,” Harkin said. “I trained really hard over the summer and ever since last season. I’m confident that I’m going to have a good season.”

Harkin won all three of her matches against Junction City, Marysville and Washburn Rural 8-0, helping Manhattan to a win in the team’s home quadrangular tournament. While Manhattan and Washburn Rural technically tied with 16 points, the Indians were declared the winner by match percentage.

To this point in the season, Harkin has lost just one game in the nine matches she’s played. In other words: She’s won 72-1 in her nine appearances for the Indians.

Harkin achieved this level of dominance by keeping her eye on the ball throughout an uncertain offseason. Even when rumors circulated that the fall season would be called off, Harkin continued to hone her craft.

“It was a little hard to just think that all the training would be for nothing if we don’t get a postseason, but I just had to think about, ‘What if we do?’” Harkin said. “Nobody else was training, so I just put extra work in.”

Harkin’s teammate in the No. 2 singles, Kayla Lei, was equally dominant in her matches. Lei defeated all three of her opponents 8-0.

Like Harkin, Lei has performed well through Manhattan’s first three tournaments, going 7-2 in all of her competitions.

“Both of them are really great competitors and really great girls off the court,” MHS head coach Tony Ingram said. “They come from great families who have instilled a great work ethic in them.”

While Manhattan’s singles players were dominant, the Indians’ doubles teams were a little shakier throughout the day.

After running through Junction City 8-0 in its first match, the No. 1 doubles team of Maura Weins and Hannah Loub was put to the test by a strong Marysville doubles team.

Weins and Loub were forced to grind out a marathon 8-4 win, with the match being the final No. 1 doubles contest to finish in the second round.

The duo seemingly was out of gas when it took on Washburn Rural’s doubles team of Meredith Kucera and Kate Fritz. Weins and Loub ended the day with an 8-3 loss.

Manhattan’s No. 2 doubles team, made up of Ava Bahr and Cooper Lohman, were slightly more consistent but were unable to push MHS over Washburn Rural

After cruising past Junction City and Marysville 8-1, Bahr and Lohman fell into a deficit early against their Washburn Rural counterparts. The pair was able to pick up a few games to extend the match, but eventually fell 8-6.

Despite the finishing losses, Ingram was satisfied with what he saw from both doubles teams.

Both squads are newly formed and still are developing chemistry together. Growing pains are part of the process.

“We’ve progressed from where we were last Saturday with the doubles group,” Ingram said. “They’re a lot more aggressive, taking chances. That’s exactly what I want them to do.”

The Indians will need to continue their improvement as they head into a difficult stretch of their schedule. Manhattan travels to Shawnee Mission South on Monday for a quadrangular tournament against the hosts, Shawnee Mission East and Junction City.

Five storylines to watch as Wyoming goes through fall camp

Saying he feels safe at Minnesota, standout receiver Rashod Bateman opts back in for 2020