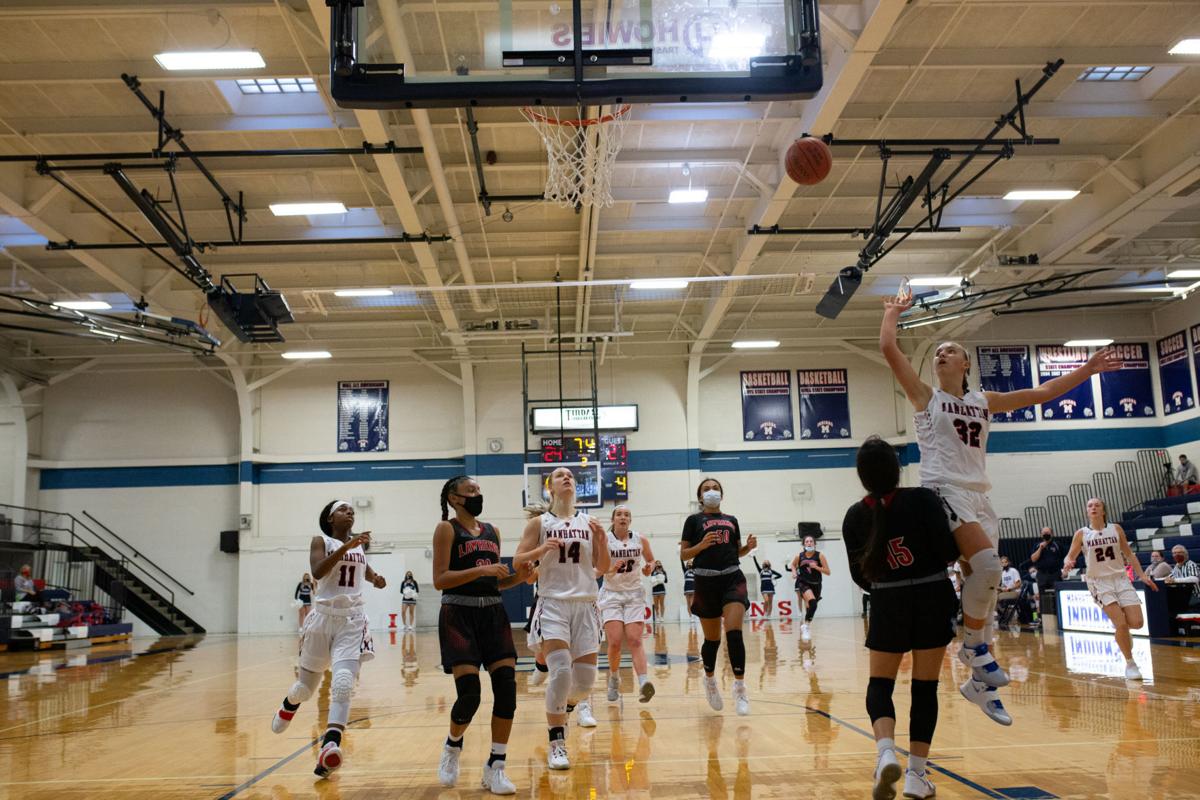 Manhattan’s Emery Ruliffson floats the ball toward the basket in Saturday night’s season opener against Lawrence. The Indians took home a 54-42 victory. 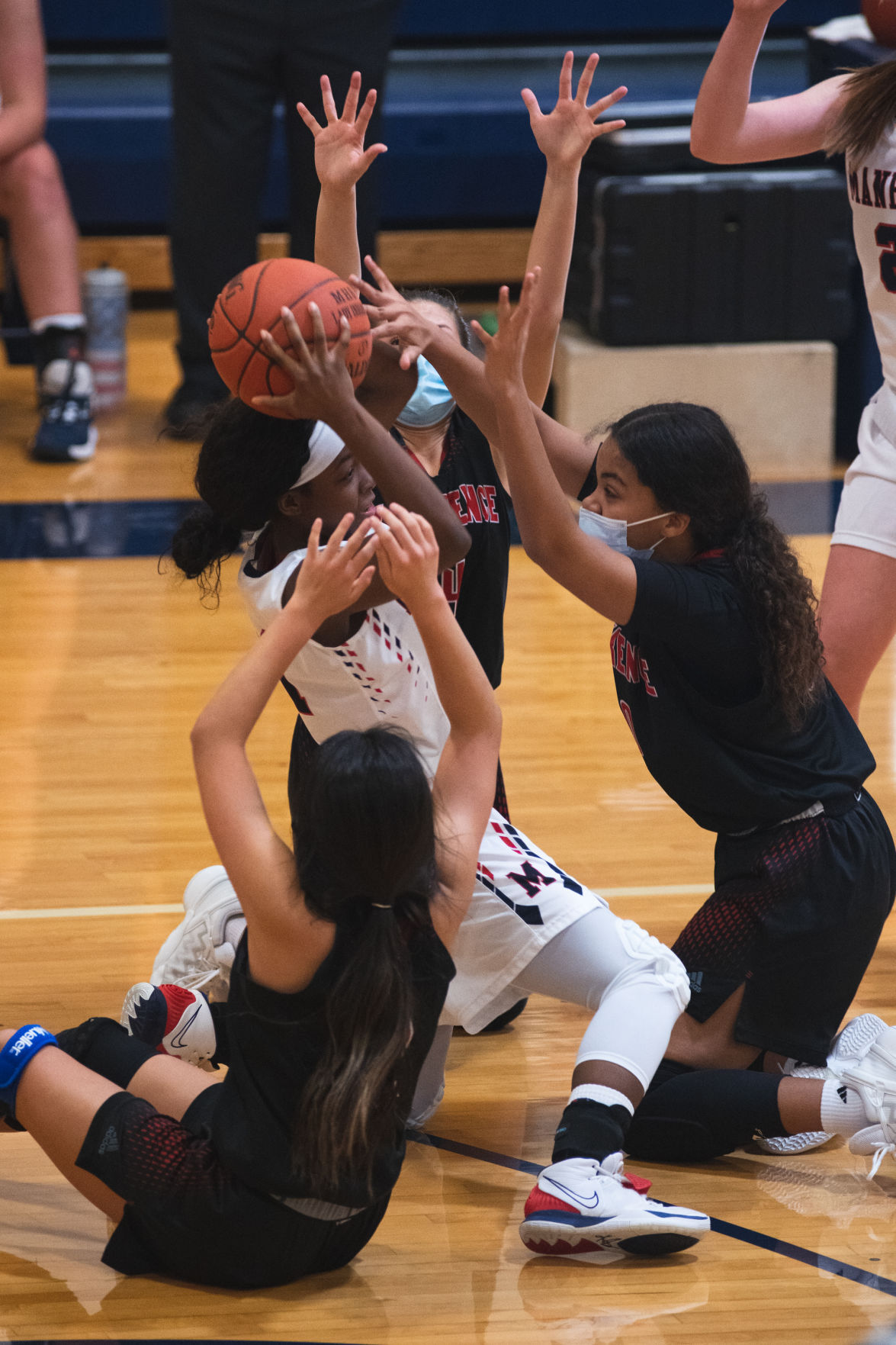 Manhattan’s Destiny Yates tries to clear a ball from a scrum on the court Friday night against Lawrence.

Manhattan’s Emery Ruliffson floats the ball toward the basket in Saturday night’s season opener against Lawrence. The Indians took home a 54-42 victory.

Manhattan’s Destiny Yates tries to clear a ball from a scrum on the court Friday night against Lawrence.

Gone are the days in which the Manhattan High girls’ basketball team dumps the ball blindly into the post and hopes Zanaa Cordis makes something happen.

No, this is a new-look Indians team. And the new look, at least for one night, appeared to be better than almost anything MHS put on the court last season.

Manhattan (1-0) started its season with a win Saturday night, knocking off Lawrence 54-42. However, it wasn’t just the final score that was a positive for the Indians, but how they got to that point that should give coach Scott Mall and his players hope.

With Cordis’ graduation, the team lost a major piece of its offensive output from last year’s team, as she averaged 12.8 points per game and shot 66% from the floor.

To compensate, Manhattan had contributions from all nine players that featured. Seven MHS players contributed points in the win.

“That’s the kind of team we are,” Mall said. “Our girls have done a good job of not worrying about their points, getting the ball around. ... I thought we got more drives in the second half, which is something we need to do.”

Avery Larson and Grace Dixon paved the way for Manhattan on Saturday. Larson seemed to pick up steam as the game wore on. After not scoring in the first quarter, she finished with a team-high 13 points on 5-of-8 shooting.

Dixon, who replaced Cordis at center, was equally efficient. The 6-foot-1 junior controlled the game for stretches, finding success in getting to the post and making turnaround shots from both blocks. She finished with 12 points on 6-of-11 shooting.

“She recognized she didn’t have to do anything fancy,” Mall said. “Just get the ball in the hole, and she had some stretches where she did a real good job of that.”

Despite the pair’s contributions in the half-court offense, much of Manhattan’s scoring was set up by its defense.

The Indians played a full-court trap for the game’s entirety, forcing Lawrence into tough decisions throughout the evening. The Lions were unable to break the press with their passing, turning the ball over 19 times.

When Lawrence did get across the half-court line and into its offense, Manhattan’s defense was just as troublesome. Lawrence rarely got off an uncontested shot. Most of the Lions’ possessions ended in either an MHS rebound or a foul.

The result was a 30% shooting performance from Lawrence, with just a 28% conversion rate from 3-point range.

Still, the Lions kept the game tight heading into the fourth quarter, as Manhattan led by just four points, 36-32. Manhattan had 13 turnovers through three periods, allowing Lawrence to have its own breakaway opportunities.

Then, MHS found its groove.

The Indians made six of their nine attempts in the fourth quarter while limiting Lawrence to just three makes. Larson led the way with seven points in the quarter.

The result was a comfortable win on opening night. MHS squashed any hopes of a Lawrence comeback by dribbling out the majority of the final three minutes thanks to high school games not imposing a shot clock.

“The two good things about the first game are one, we got a win, and two, we got it over with,” Mall said. “Now we can see what happened during the game, watch film and see things we need to focus on to get better for the next team.”