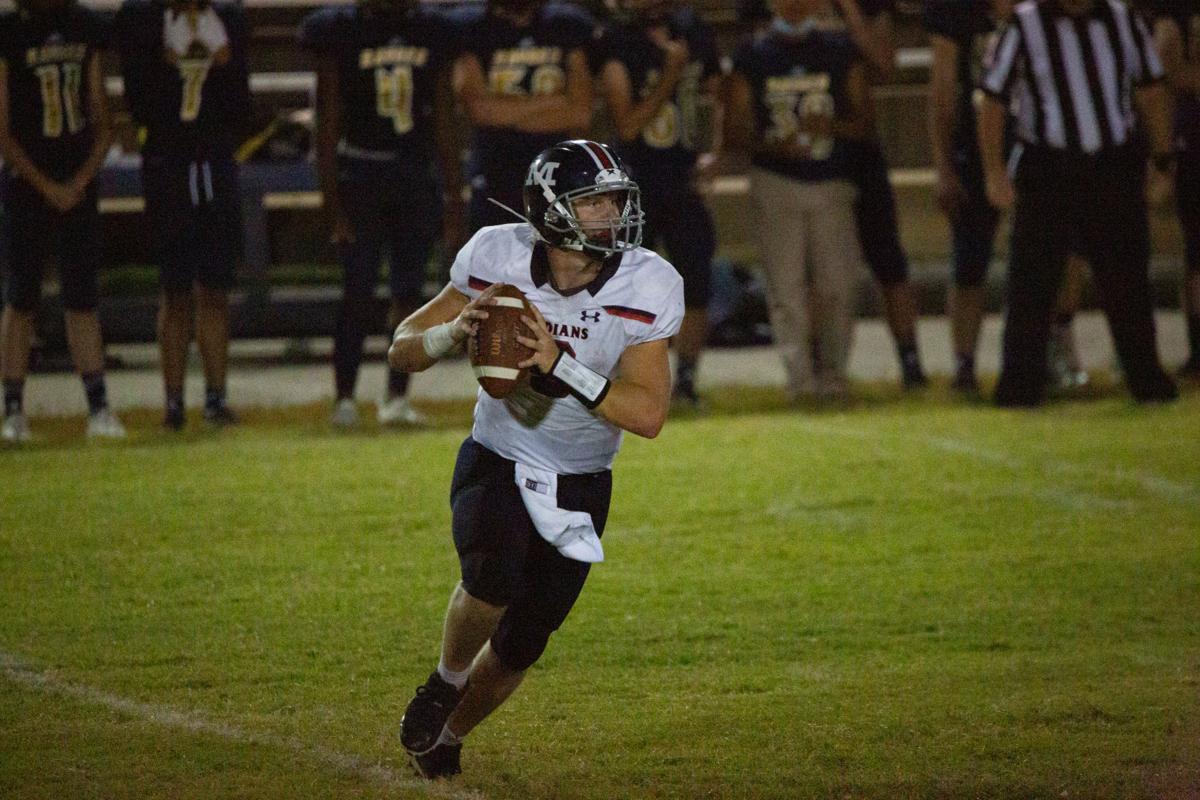 Quarterback Dayne Aschenbrenner looks downfield in Manhattan’s loss at Hayden on Sept. 18. MHS finally has all of its offensive pieces on the field following a string of injuries. Manhattan concludes its regular season with a home game versus Emporia on Friday. 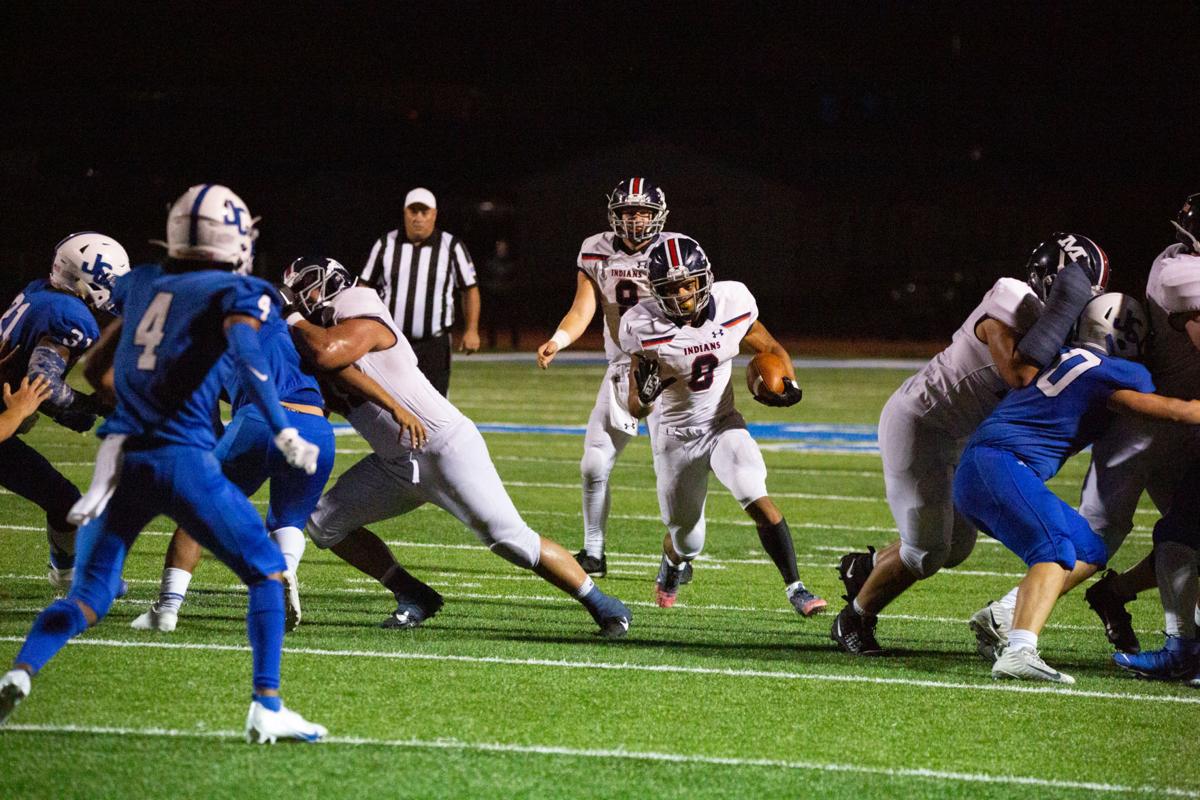 Running back Vincent Smith finds a gap and pushes forward in Manhattan’s loss to Junction City on Sept. 11. Smith will return to Manhattan’s lineup following an injury that has sidelined him since Week 3. MHS hosts Emporia on Friday in the regular-season finale for both teams.

Quarterback Dayne Aschenbrenner looks downfield in Manhattan’s loss at Hayden on Sept. 18. MHS finally has all of its offensive pieces on the field following a string of injuries. Manhattan concludes its regular season with a home game versus Emporia on Friday.

Running back Vincent Smith finds a gap and pushes forward in Manhattan’s loss to Junction City on Sept. 11. Smith will return to Manhattan’s lineup following an injury that has sidelined him since Week 3. MHS hosts Emporia on Friday in the regular-season finale for both teams.

After a season of peaks and valleys, it appears the Manhattan High football team finally has found some consistency heading into the final week of the season. That’s perfect timing if you ask head coach Joe Schartz.

“I think it’s been a strange season,” Schartz said. “These last few weeks with some consistency and guys stepping up and showing leadership and other kids accepting their role, it’s starting to feel normal. I like that feeling.”

Manhattan now has won two games in a row and has a record above .500 for the first time since it started the season 1-0. The Indians didn’t turn the ball over once in their 49-0 win over Topeka West last week — a first for the season — while forcing their opponents to turn the ball over twice.

It was as close to a perfect game as the team could get, with the only errors coming on a few first-half penalties that extended the Chargers’ drives. Even then, a few of the calls were suspect at best, drawing the ire of Schartz and Manhattan’s fans alike.

“It was a clean game,” Schartz said. “I think the problems came from four bad calls. ... That’s what slowed us down a little bit. T-West at the beginning, they got a couple first downs and were keeping the ball away from us and trying to execute their game plan. Once we got our second touchdown on offense, things broke loose for us.”

Now, Manhattan’s offense may be getting even more potent. Running back Vincent Smith will be available for the Indians for the first time since being injured in Manhattan’s Week 3 loss to Hayden.

With Smith returning, Manhattan’s backfield has returned to full strength. MHS also has its full roster available on the offensive line for the second week in a row. With Manhattan’s run-first game plan hinging upon those two position groups, the timing of a full return to play couldn’t be better.

Smith was averaging 93 rushing yards per game prior to his injury, though he only played for one and a half quarters in one of the games. He brings a combination of both speed and strength to Manhattan’s running game that gives Schartz another tool when scheming how to attack teams.

When Smith was hurt, Schartz began moving quarterback Dayne Aschenbrenner to the running back spot to fill some of the void left behind by Smith. Though he has struggled at times this season in the passing game, Aschenbrenner has proved to be an exceptional runner, moving the ball on the ground for a team-leading 778 yards and 10 touchdowns this season.

Even with Smith’s return, Schartz plans to continue mixing in Aschenbrenner as a running back. With Aschenbrenner in the mix, Manhattan now goes from searching for bodies to fill the running back spot to having a three-headed monster carrying the ball.

“Dayne has done some very nice things at running back,” Schartz said. “He’s a good downhill runner and a good blocker. We’d be foolish not to utilize his strengths at the running back position. It’s going to be based upon the situation at hand and the opponent.”

Manhattan’s renewed depth at running back will receive its first test by way of Emporia on Friday at Bishop Stadium.

On paper, it would appear the Indians should have their way with the Spartans.

Emporia is just 2-5 on the season (1-4 Centennial League) and in the middle of a three-game losing streak. The Spartans’ only two wins have come against 4A Atchison and Highland Park, which hasn’t won a game since 2014.

Emporia will face an added hurdle of operating under a new head coach, as the Emporia Board of Education voted to fire Spartans’ head coach Corby Milleson Wednesday night. According to KSNT, Milleson has been accused of abusing multiple players.

Despite the distractions and struggles surrounding its opponent, Schartz hopes his team will give Emporia a healthy respect heading into the game.

“We pointed out to our kids that they’ve played Junction City the last game of the season for the last four years and three out of the four years, they beat Junction City,” Schartz said.

“Typically, Emporia gets better as the season goes along and that’s what we’ve seen on film. Our kids know they’ll have to go out and perform well.”

However, it is easier said than done not to look past Emporia and into the postseason. At the moment, Manhattan would finish as the No. 7 seed in the West bracket and host Dodge City in the first round of the playoffs.

There is a possibility Manhattan could move up to as far as the No. 4 spot should certain dominoes fall into place. Such a move would require a Manhattan win its game against Emporia and No. 4 Derby, No. 5 Wichita-West and No. 6 Gardner-Edgerton to all losing.

Of those teams, Wichita-West appears to be in the most danger of falling. In that case, MHS would move up to the No. 6 seed in the bracket.

For his part, Schartz is trying to keep his team away from hypotheticals. He hopes the players will devote their focus to Emporia and allow the chips to fall where they may.

“We want to keep our kids focused on Friday night and control what we can control,” Schartz said. “That’s preparing for Emporia and giving a good effort to beat them. If we do that, things will take care of themselves. We definitely want to be able to host a first round playoff game and it looks like that’s going to happen. First things first, we have to take care of Emporia.”