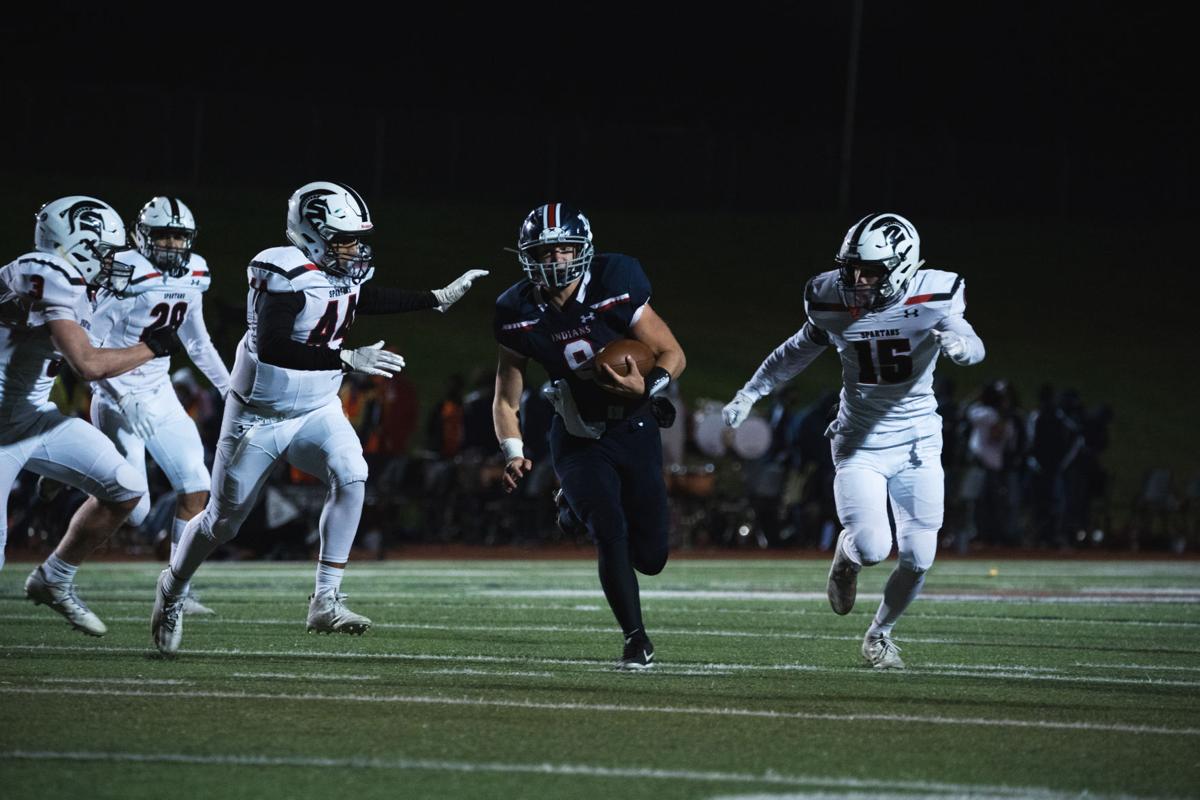 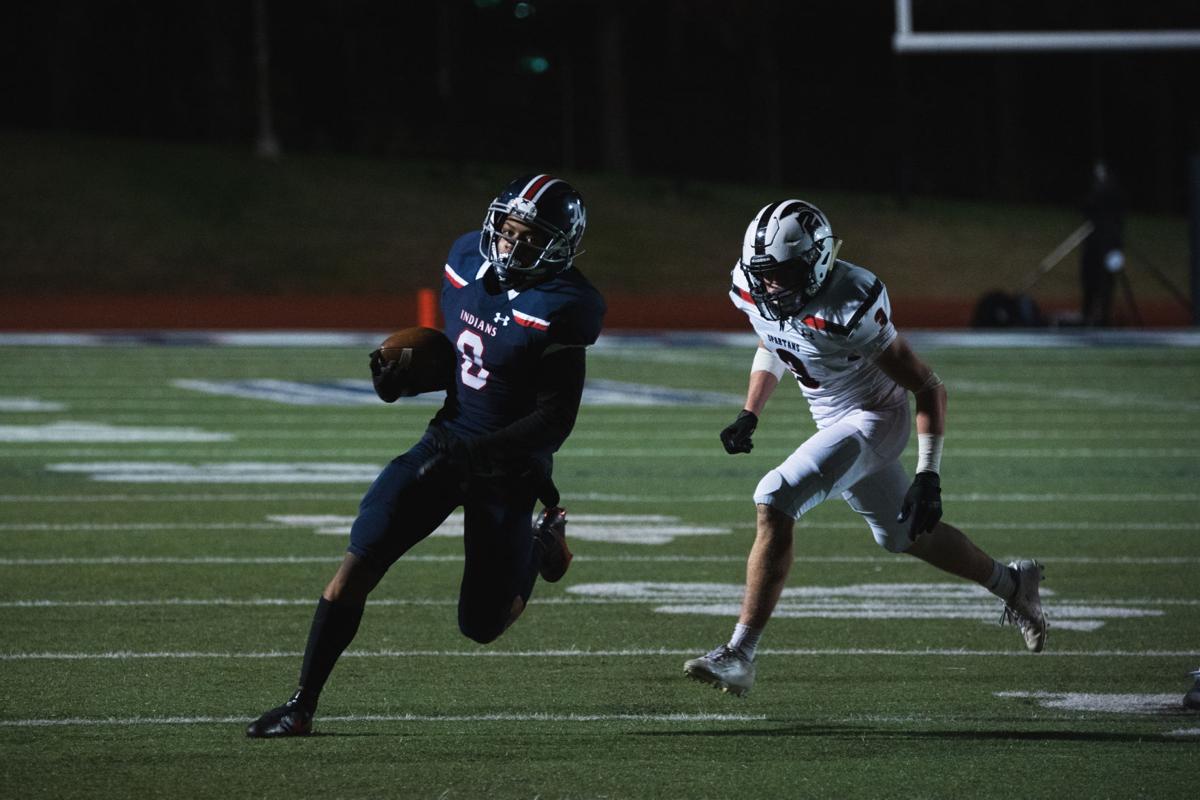 MHS running back Vinny Smith gets outside of Emporia defenders on his way to the end zone Friday night at Bishop Stadium. The Indians dominated the third quarter with 28 unanswered points.

MHS running back Vinny Smith gets outside of Emporia defenders on his way to the end zone Friday night at Bishop Stadium. The Indians dominated the third quarter with 28 unanswered points.

In one of its few positive moments Friday night at Bishop Stadium, Emporia pinned Manhattan High at its 2-yard line with approximately 10 minutes to go in the second quarter.

At the time, the MHS was nursing a two-touchdown lead. Despite Emporia’s struggles this season, it still wasn’t quite the margin Manhattan wanted.

With its back to the end zone, the Indians’ offense started plugging away in its usual fashion — by smashing the Emporia defense in the mouth.

On the backs of quarterback Dayne Aschenbrenner and running back Lorenzo Wilhoite, the Indians slowly worked their way out of the shadow of their own end zone. The ball never left the ground, as the duo churned their way up the turf and across midfield as minutes ticked off the clock.

After nearly eight minutes and more than 10 plays, Aschenbrenner finally crossed the goal line to put MHS up 21-0 following the extra point. The drive was symbolic of the evening, as Manhattan consistently ran through Emporia on its way to a 49-7 win.

Manhattan (5-3, 4-3 Centennial League) didn’t punt once. It racked up 374 total yards, 280 of which came on the ground. Meanwhile, its defense gave up just 131 total yards and didn’t allow a touchdown until just 4:30 remained in the game and the Indians’ reserves were on the field.

At the center of the action was Aschenbrenner.

The senior quarterback, who has had his ups and downs this season, played his most complete game of the 2020 campaign, passing for 94 yards and rushing for 83. He accounted for three of Manhattan’s touchdowns — two rushing and one passing.

The performance comes after multiple weeks of splitting time at the position with fellow quarterback Keenan Schartz. While some of that was because of depth issues at the running back spot for MHS, the loss of playing time also came about because of Aschenbrenner’s struggles in the passing game and the turnovers he committed.

However, the senior has turned it around the last two games. He has taken the majority of the snaps at quarterback in both games, including all of the snaps in Friday’s game before being pulled once the team was up 35-0.

In those two games, Aschenbrenner has passed for 108 yards and one touchdown while completing 55.5% of his attempts. He also has rushed for 193 yards and five scores. Perhaps most importantly, he hasn’t turned the ball over once.

“(My confidence) is definitely coming up,” Aschenbrenner said. “We’re getting guys back healthy and that’s what’s really helping everybody’s confidence.”

While it appeared Manhattan could have run every single play and found the same success, what allowed the MHS offense to find a new gear was the passing game.

Though he didn’t throw it often, Aschenbrenner and the team’s passing game opened up major holes in the Emporia defense by taking the top off. Aschenbrenner averaged 23.5 yards per completion on the night, with his one touchdown pass being a perfectly thrown ball on a deep post to wide receiver Kyler Hahn. It was Hahn’s first catch of the season.

“It works both ways,” Aschenbrenner said. “We start with the run game to open up the pass game, and then go backward by throwing a deep pass and then the run game opens up. You just rotate.”

From there, it was up to Manhattan’s offensive line to get the job done. The group got a consistent push all night, opening up running lanes that allowed the Indians to average 7 yards per carry on the evening.

“They just did a great job of getting off the ball, staying low and doing it all game,” Aschenbrenner said.

Manhattan’s defense did its job, too.

Much like MHS, Emporia’s game plan always starts on the ground. The Spartans ran the ball on 33 of their 39 plays.

However, unlike Emporia, the MHS defense was well up to the task. Manhattan allowed just 2.5 yards per rush on average, while also making eight tackles for loss on running plays.

The effort was led by defensive lineman Damian Ilalio, who once again played a sterling game. The Kansas State commit was in on multiple tackles for loss and also recorded 1.5 sacks.

“Any time you face an option attack, you’ve got to be assignment sound,” MHS head coach Joe Schartz said. “It was a total team effort. Our defensive line is very stout. That’s the strength of our team. Nobody’s really been able to run the football on us. I hope that stays true.”

Now, Manhattan turns its attention to the postseason. Friday’s win allowed Manhattan to leap over Wichita-West, which lost to Wichita-East 22-8 Friday night, in the 6A rankings into the No. 6 seed in the 6A West bracket. The Indians will face No. 11 seed Garden City at home next at 7 p.m. next Friday.

MHS will take momentum into the playoffs. After struggling through injuries during their early games, the Indians now areas healthy as they’ve been all season and on a three-game winning streak.