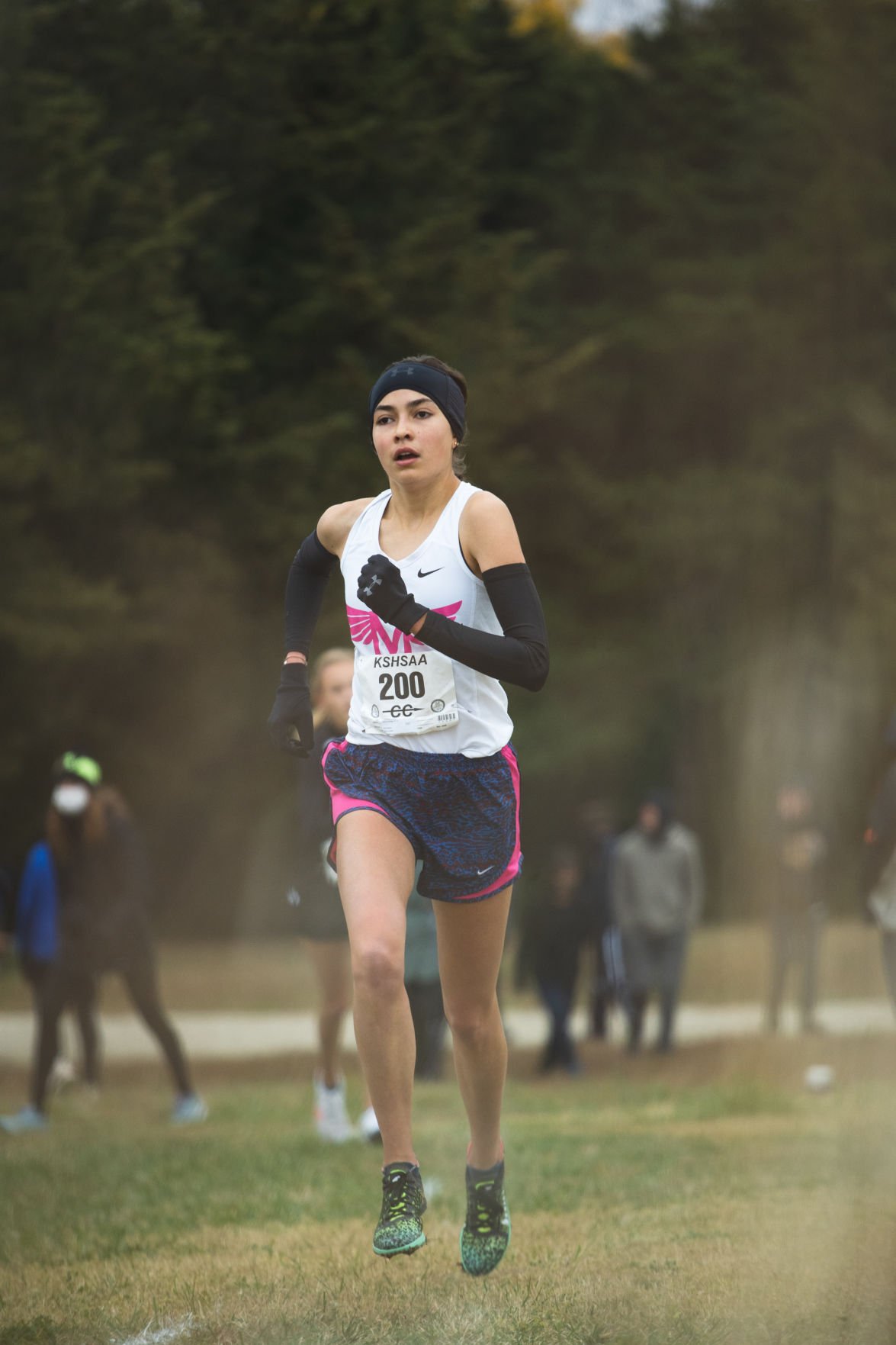 Manhattan junior Jenna Keeley continues her strong races with a first place finish in Saturday’s Class 6A Manhattan Regional race. With a time of 18:46, she averaged a 6:03 minute pace per mile and helped secure MHS a very narrow victory with less than a point margin over Washburn Rural. 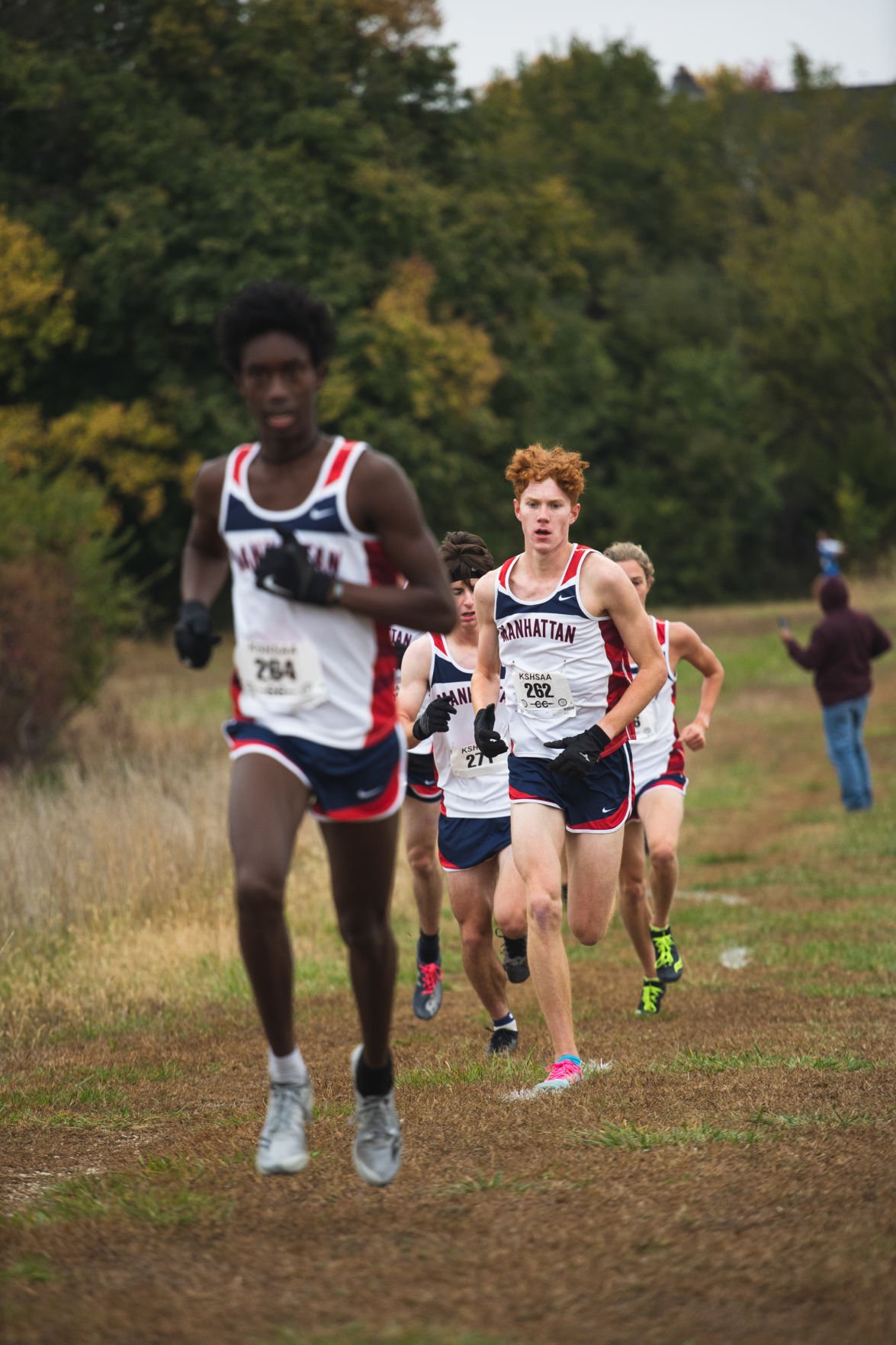 Manhattan runners, with Max Bowyer (front) and Sean Anderson (behind), remain in a close group part way through Saturday's regional meet. MHS finished with a dominant victory, the wind in its sails provided by six runners finishing in the top 10.

Manhattan junior Jenna Keeley continues her strong races with a first place finish in Saturday’s Class 6A Manhattan Regional race. With a time of 18:46, she averaged a 6:03 minute pace per mile and helped secure MHS a very narrow victory with less than a point margin over Washburn Rural.

Manhattan runners, with Max Bowyer (front) and Sean Anderson (behind), remain in a close group part way through Saturday's regional meet. MHS finished with a dominant victory, the wind in its sails provided by six runners finishing in the top 10.

The Manhattan High cross country program has hit its stride. It turns out that stride is faster than any other team in the region.

The MHS boys’ and girls’ teams won both the team and individual portions of Saturday’s regional at Warner Park. However, the ways in which the teams completed the wins were very different, as the boys’ team won in blowout fashion while the girls’ team pulled off the victory by the narrowest of margins.

The girls’ team ran in the first race of the regional, with the start line consisting of eight teams standing in frigid temperatures.

However, the field of regional title competitors soon shrank to just two schools, as Manhattan and Washburn Rural distanced themselves from the field. The meet turned into dogfights between individual runners from each school, as the Indians and Junior Blues attempted to match the other side step for step.

The first battle to come over the hill and toward the finish line was that of Manhattan’s Jenna Keeley and Rural’s Madeline Carter. Keeley, who maintained a lead for the majority of the race, felt Carter’s presence growing as the finish line drew nearer.

“I could definitely hear her at the two-mile point and could hear her coaches,” Keeley said. “I think it really helped me to know (where she was) to push myself.”

However, Keeley held on to win the individual title, running her race in 18:46.3, just under five seconds faster than Carter. Keeley is undefeated this year, finishing first in every meet she has participated in.

However, in the ensuing moments, it appeared the Junior Blues might take the team title. Following Carter’s second-place finish, Rural’s Keely Wagner finished third at 19:42.3.

From there, MHS and Washburn Rural alternated runners, as Manhattan’s Amelia Knopp finished in 19:50.2 for fourth, six seconds faster than Rural’s Khloi Bird. Then it was MHS’ Haley Henningson in sixth with a 20:14.0 time, five seconds faster than Junior Blues runner Sydney Laster.

Through their first four finishers, Washburn Rural led Manhattan 17-20. However, Manhattan’s depth proved to be the deciding factor on the day.

Despite the closeness of the affair, Melgares wasn’t too concerned as she watched the runners cross the line. With the top-three teams in the regional advancing, her goal was just to get her team into the state tournament.

“Last week, yes (I was worrying),” Melgares said. “This week, there’s bragging rights that come with a league title. Our goal at regionals is to just get through. To survive and advance to the state meet and then to bring it there.”

Manhattan’s boys’ team did much more than survive and advance, as it dominated its race to finish first by 41 points, 20-61, over Washburn Rural.

The Indians’ dominance started with Daniel Harkin. After a somewhat slow start to the year by his standards, Harkin is back to the form that won him the Gatorade Kansas Boys Cross Country Runner of the Year award and the individual state title last year. He crossed the finish line at 15:50.7, nearly 36 seconds faster than Washburn Rural’s Arrik White.

“I think I’m at the right peak right now,” Harkin said. “I think the training has been paying off. We have a great program and coach, so it’s really starting to show.”

Even with the blowout win, Harkin still wasn’t entirely satisfied with his run. He wanted to break the course record, which is 15:38.0.

“I didn’t quite get that, but it is relaxing to know there’s not someone up in my throat trying to beat me,” Harkin said.

Though Harkin’s performance stood out, the rest of Manhattan’s runners also played their part in the team’s victory.

It’s a testament to the overall talent of the group that the eighth-best score of the entire regional wasn’t even counted toward Manhattan’s team score. Even Manhattan’s final finisher, Kolby Grogg (17:40.7), who crossed the finish line 14th, finished faster than the best runners for three of the schools competing in the regional.

“They all have the common mission that they’ve had for at least the last two years: to place high at the state meet,” Melgares said. “It’s something that doesn’t go away. There’s track season, there’s the offseason, but in the back of their mind, they still have the goal of doing well at the state cross country meet.”

That goal now has a chance of being realized, as both teams will travel to Augusta to run in the state tournament at 4 Mile Creek Resort next Saturday. The boys’ race will start first at noon, with the girls race following at 12:35 p.m.

“(We want to) run fierce, race fierce and put ourselves in position to take home the title,” Melgares said. “Especially for the guys. For the girls, I feel like a podium finish would be super good for them. But whatever the outcome is, (I hope) we go out there and give it everything we’ve got.”