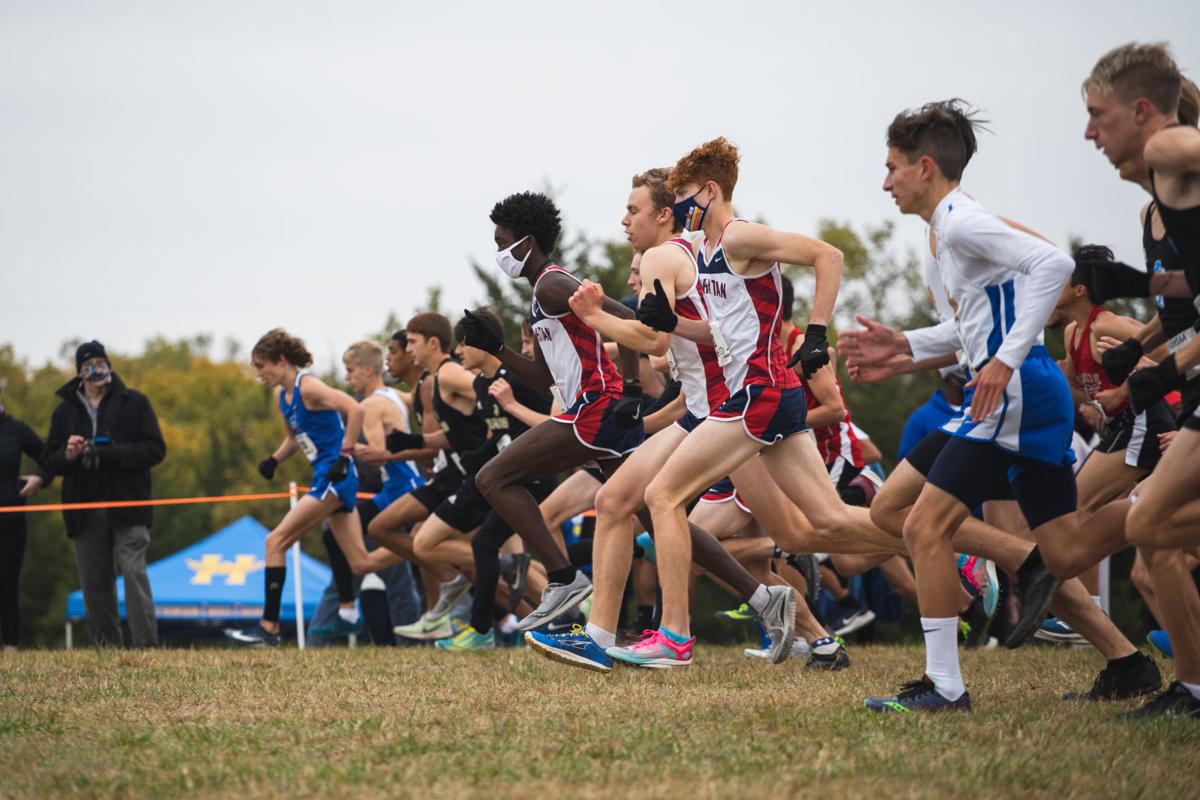 Boys’ cross country teams leave the starting line in last Saturday’s Class 6A Manhattan Regional meet. Manhattan will be in the hunt for a state title this Saturday in Augusta. 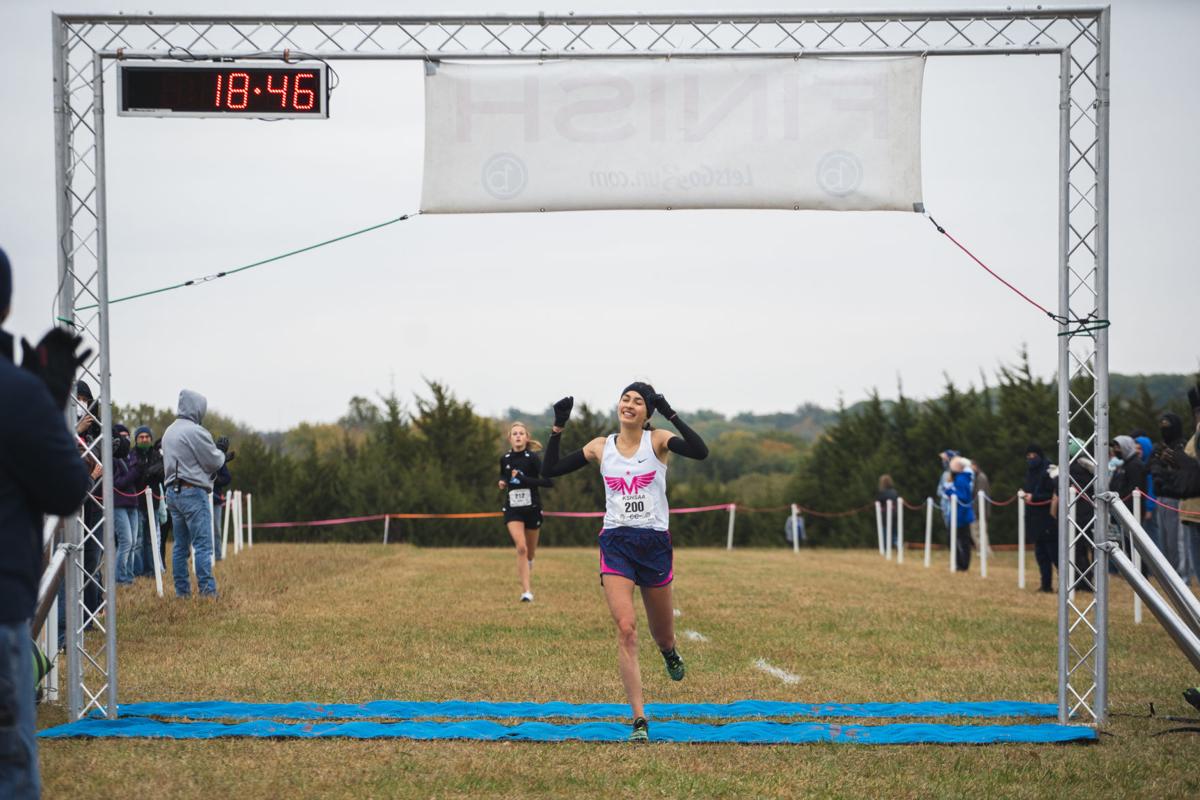 Manhattan junior Jenna Keeley placed first in last Saturday’s Class 6A Manhattan Regional race with a time of 18:46. Keeley will be in the hunt for a state title.

Boys’ cross country teams leave the starting line in last Saturday’s Class 6A Manhattan Regional meet. Manhattan will be in the hunt for a state title this Saturday in Augusta.

Manhattan junior Jenna Keeley placed first in last Saturday’s Class 6A Manhattan Regional race with a time of 18:46. Keeley will be in the hunt for a state title.

Saturday’s meet has been circled on the Manhattan boys’ cross country team’s calendar for years.

It started in 2017, when three members of Manhattan’s current team were freshman. The group watched as that year’s varsity group finished second at state.

At that point they decided that second place wouldn’t be satisfactory by the time they were seniors. It was going to be state title or bust.

“We just made it our goal that we wanted to win the title,” senior Sean Anderson said. “We had meetings over the winter, got our group together, started pushing it into everyone’s mind.”

Now, the group appears in prime position to accomplish its goal behind both a star runner and a stellar supporting cast that has steamrolled through competition during the season.

The team’s talent was no more apparent than in last weekend’s regional, which Manhattan won by more than 40 points. Six of Manhattan’s seven competing runners finished inside the regional’s top 10, with the seventh finishing 14th.

The group is led by senior Daniel Harkin, the reigning individual state champion and the 2019 Gatorade Kansas Boys Cross Country Runner of the Year. After a somewhat slow start to his season — for his sky-high standard, anyway — Harkin appears to be in prime form to repeat as a state champion and cement his legacy.

“The competitiveness. Being a fierce competitor, but also keeping the fun and a little light-heartedness to it,” head coach Susan Melgares said of what Harkin brings to the team. “It’s a nice blend. You can take it too seriously and the fun can get sucked out of it. It’s such a hard sport. He works hard, is really competitive, but also can have a great time.”

The remainder of Manhattan’s team follows in Harkin’s footsteps, as the group of Anderson, Max Bowyer, Ben Mosier, Gavin Erickson and Ethan Bryant aren’t far behind. Together, they form what Melgares calls the team’s “Pack Attack.”

“This year, they’ve grown into that organically throughout the season to where at the regional meet, holy cow, they had an intimidating bunch,” Melgares said. “It’s an intimidating factor. When you look around as an individual runner and when you see that swarm coming at you, it is an intimidating situation.”

The similarity in the group’s times creates for a competitive atmosphere in training. With so many of the runners pumping out fast times, it creates an environment in which it is easy to tell if one runner is slipping.

“We all try to push each other,” Erickson said. “We all know where we stand, but that doesn’t mean we’re going to settle. We try to upset our current standings and hold each other accountable.”

Now, the boys’ team hopes that accountability will translate to the 4 Mile Creek Resort course in Augusta for a state title.

“I think we just have to keep each other in check, make sure everyone knows we’ve put in the work,” Anderson said.

The Manhattan girls’ cross country team has made a habit of grinding down teams this year.

They do not have the same build as the boys team, which uses overwhelming force to demolish its opponents. Instead, the girls’ team uses depth to fend off attacks on the lead built with its top three-to-four runners.

That was the case in last weekend’s regional, when Manhattan’s fifth, sixth and seventh times fended off Washburn Rural’s fifth runner. The effort proved to be the difference: Manhattan won the regional by one point.

“It really shows that every runner counts,” said senior Josie Koppes, who finished seventh out of Manhattan’s runners. “Even though they only score top five, it shows that six and seven can bring up the winning point. At regionals, our six and seven runners beat Washburn’s fifth-place runner, and that’s what solidified our win. It shows that everyone counts on the team, which makes you feel really good.”

Koppes is the only senior on an otherwise young team. However, youth does not necessarily mean inexperience, according to Melgares.

“They have more experience than you might think,” Melgares said. “Our juniors have been at the state meet; this will be their third. I’m expecting them to be in the hunt for a podium finish. ... They’ve set themselves up to capitalize on anything that might happen.”

The group is led by junior Jenna Keeley, who has been a wrecking ball for the Indians. She has won every meet she has competed in. For Melgares, there’s no reason to think the state meet will end any differently.

“She’ll be in the hunt for the title,” Melgares said. “It’s hard to gauge, because some of the times out there that you might see, the courses have varied. It’s hard to tell. We know there are some quality runners, but we know Jenna is tough as nails. She’s going to be in the hunt.”

Now, all that’s left to do for Melgares and the girls’ team is to wait. The team will head down to the course Friday to get a lay of the land before it arrives at the finish line at noon Saturday. Until then, the goal is simply to keep the team where it is.

“I hope when they’re done, they can say they gave everything they had,” Melgares said. “It’s the best anybody can do. If they do that, we’ll be in the hunt for some hardware.”