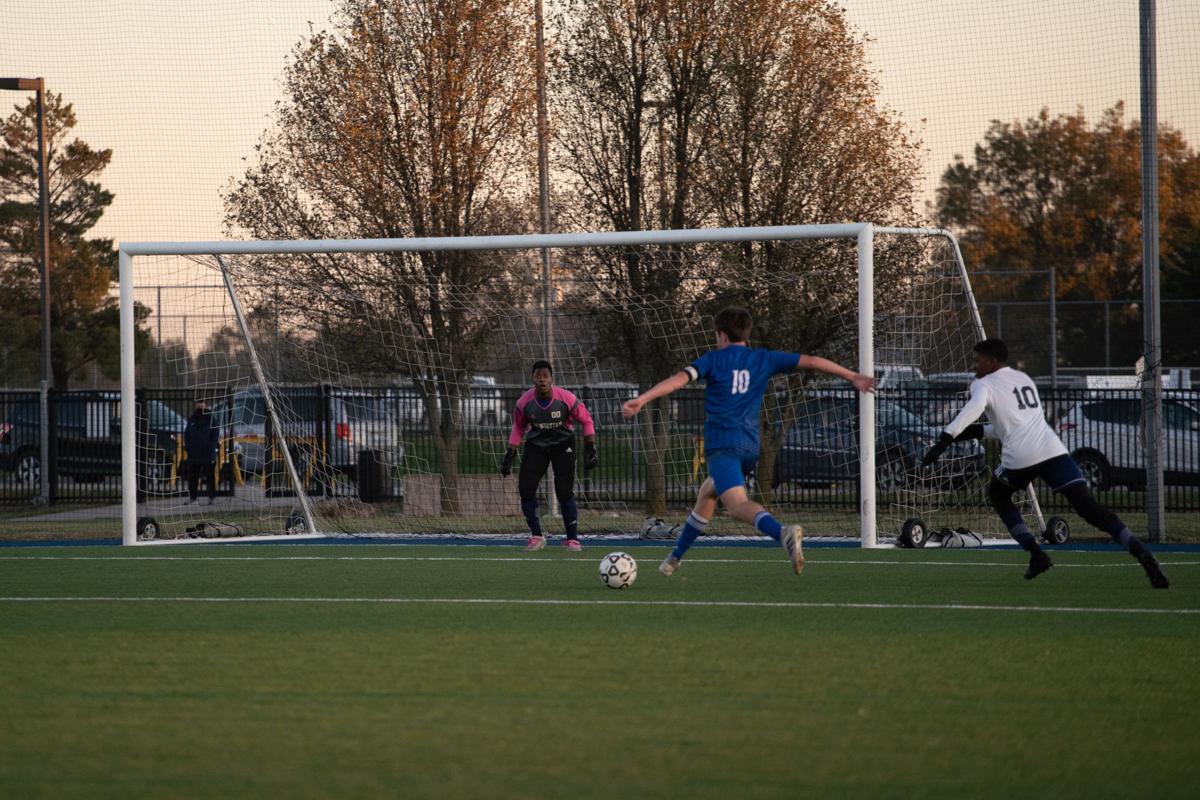 Manhattan defender TK Robinson rushes to meet an uncontested Ethan Hensyel as keeper Caleb Deloach surveys the scene. Hensyel would go on to score, putting Washburn Rural up 2-1 in the first half of Thursday playoff match. 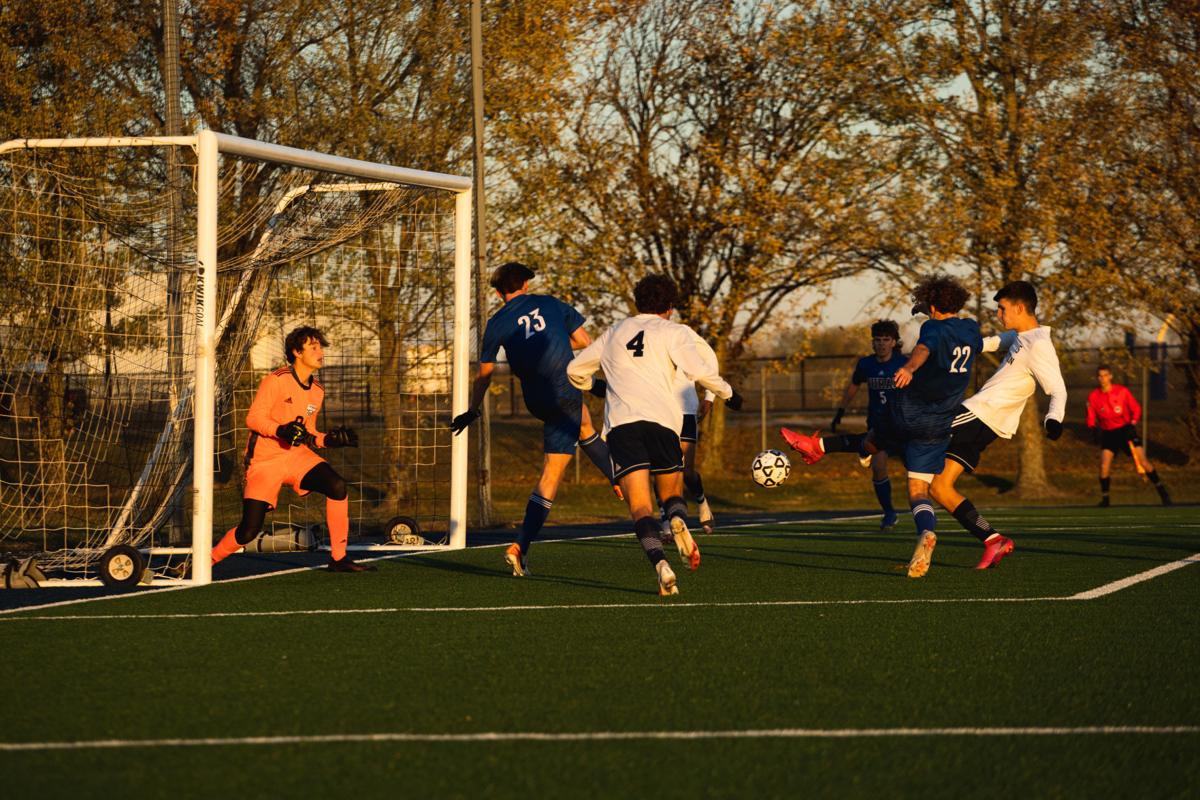 Manhattan forward Grant Snowden strikes at Washburn Rural's goal for the first score of Thursday evening. After a previous attempt was stopped by Washburn keeper Wyatt Arnold moments before, Snowden secured the rebound and found the net.

Manhattan defender TK Robinson rushes to meet an uncontested Ethan Hensyel as keeper Caleb Deloach surveys the scene. Hensyel would go on to score, putting Washburn Rural up 2-1 in the first half of Thursday playoff match.

Manhattan forward Grant Snowden strikes at Washburn Rural's goal for the first score of Thursday evening. After a previous attempt was stopped by Washburn keeper Wyatt Arnold moments before, Snowden secured the rebound and found the net.

TOPEKA — A night that started with promise ended in tears for the Manhattan High boys’ soccer team.

The Indians’ upset bid of Washburn Rural Thursday night at Washburn Rural came up narrowly short, as the Junior Blues outlasted Manhattan to win the regional and advance to the state quarterfinals. MHS finishes the season with a 10-6-1 record.

“We feel sad and depressed that our season came to an end because we’ve been playing soccer since we were in second grade together,” senior midfielder Cole Schmitt said. “On the other side, we fought so hard. It was unlucky.”

Despite being a clear underdog to Rural, which won its 26th Centennial League title (outright and shared) in as many years this season, Manhattan didn’t give an inch. The teams shared roughly equal possession time, with both sides having stretches in which they appeared close to running away with the game.

Though the Junior Blues (15-2-1) started on the front foot, earning several good chances off long throw-ins and set pieces, it was Manhattan that scored the game’s first goal.

After breaking out of Rural’s high press, forward Gabe Effiong dribbled to the baseline and punched a low cross into the center of the 18-yard box. It was met by forward Grant Snowden, who appeared to have an easy tap-in secured.

However, Rural goalkeeper Wyatt Arnold made a fantastic recovery, throwing himself in front of Snowden’s shot to deflect it away. The deflection fell to the feet of midfielder Ibrahim Ciftci, who took a shot of his own from mere yards out. Again, it was met with an outstretched paw from Arnold.

The goalkeeper’s luck eventually ran out, though, as the deflection fell to Snowden’s feet. This time, the forward took his opportunity, hammering the ball into the net to put Manhattan up 1-0 just under eight minutes into the game.

“They were fired up” MHS head coach Mike Sanchez said. “We wanted to come out and put the pressure on them. We wanted to put them on their heels and dictate play. I feel like we did.”

However, a bit of bad luck for Manhattan made the lead short-lived.

It started with a no-call on what appeared to be a Washburn Rural hand-ball deep in its own territory. As the Indians stood in protest, the Junior Blues played on, launching a long ball to forward Ethan Hensyel.

The pass caught Manhattan out of position, as Hensyel raced toward the goal with just centerback TK Robinson and goalkeeper Caleb Deloach between him and the net. Hensyel took care of Robinson at the edge of the 18-yard box with a nifty sidestep, then beat Deloach by curling the ball into the far left corner of the net with 23:35 left in the half.

A little more than five minutes later, Rural took the lead on another play affected by the referee, although in this case, the call appeared clear.

Following a reckless challenge inside the box from multiple Manhattan players, Hensyel calmly placed his penalty kick past Deloach, sending the keeper the wrong way to take the lead.

The goal appeared to awaken Manhattan. Suddenly, it was the Indians controlling the game, pushing Washburn Rural ever deeper into its own half.

The pressure paid off, as MHS tied the game at two goals apiece with 13:45 remaining in the game. This time, it was the Indians who were the beneficiaries of some luck.

It started when Schmitt played a corner to the top of the 18-yard box. Midfielder Connor Turner didn’t shy away from the chance, taking on a half-volley.

The ball took a fortunate deflection of a Rural defender up into the air. Arnold, who was coming forward to collect the ball, was forced to watch as the ball soared over his head and across the goal line.

“I think it’s just fun,” Schmitt said. “The first half was a blast to play in. It was back and forth. ... We had to calm down and realize what happened.”

The 2-2 tie carried to halftime and deep into the second half. However, Manhattan didn’t have nearly as many scoring opportunities as it did in the first half.

Instead, the Indians struggled to work the ball deep into Rural’s territory. When they did manage a shot, Arnold was always there to make the save.

“They did a good job adjusting,” Sanchez said. “They played a little higher back line and took away our ability to find that through ball and get in behind. In the first half we tried to expose that and they made some good adjustments.”

As time wore on, the Junior Blues started to regain their footing, slowly pressing Manhattan. It took multiple stellar saves from Deloach to keep the scoreline level.

However, with 6:17 left in the game, Rural’s efforts finally paid off. The Junior Blues capitalized on a mishandled shot by Deloach, as midfielder Easton Bradstreet pounced on the error for a tap-in goal.

Manhattan didn’t back down. The Indians controlled possession for the better part of the time that was left, but couldn’t break through the wall of defenders between them and the game-tying goal they were searching for.

“It wasn’t frustrating at first, because in the playoffs, when you’re the underdog, you’ve got to stick with it,” Schmitt said. “It was tied 2-2 and we were fine with that, but when they put the goal past, it was very frustrating for the last 10 minutes.”

The loss ends the high school careers of 19 of the 26 players on Manhattan’s roster, as all 17 are set to graduate. The group has played together since they were in youth league soccer and composed one of the final groups to have been influenced by late Manhattan High head coach Frank Alonso.

“They’re Frank’s boys,” Sanchez said. “They played with him since they were little boys and to stick with it all this way, that’s pretty inspirational. Almost every single one played for (Frank). I know he’s looking down at them and he’s proud of them. They have a ton of heart.”