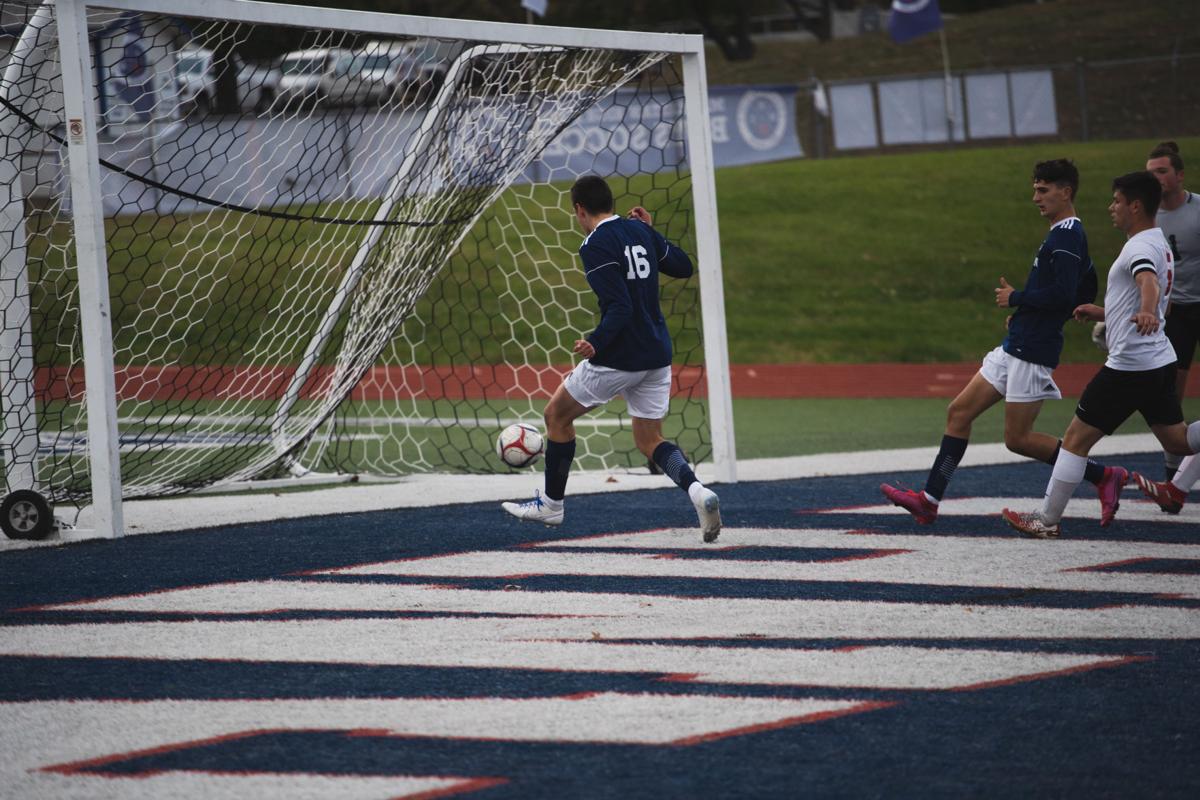 Midfielder Ibrahim Ciftci taps the ball in for MHS’ second and final goal of the Thursday’s game for Manhattan against Shawnee Heights at Bishop Stadium, securing a 2-1 victory for the Indians. 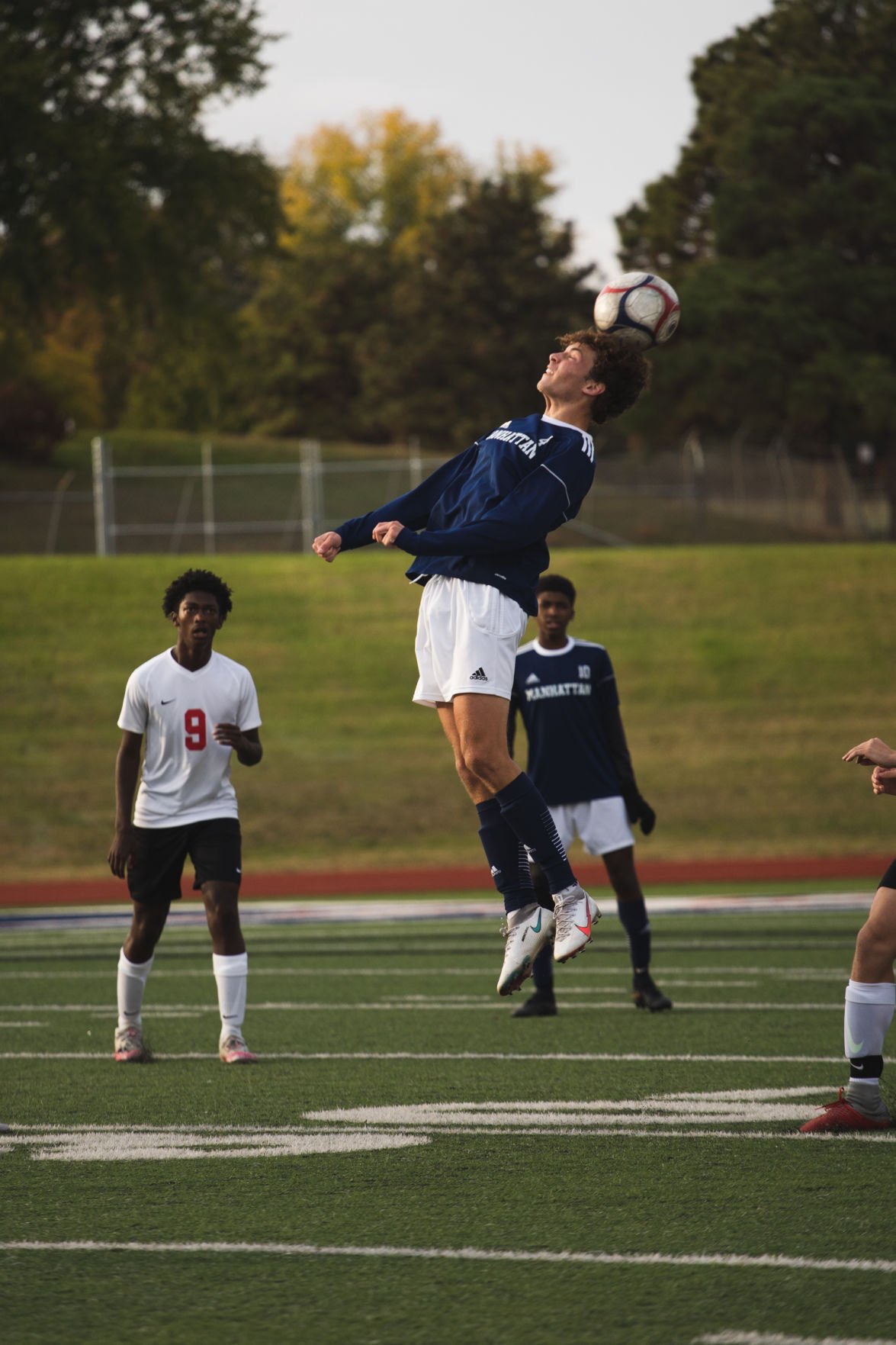 Clayson Joyce, defender for MHS, heads the ball in the second half of Thursday night's game versus Shawnee Heights at Bishop Stadium.

Midfielder Ibrahim Ciftci taps the ball in for MHS’ second and final goal of the Thursday’s game for Manhattan against Shawnee Heights at Bishop Stadium, securing a 2-1 victory for the Indians.

Clayson Joyce, defender for MHS, heads the ball in the second half of Thursday night's game versus Shawnee Heights at Bishop Stadium.

Try as it might, the Shawnee Heights offense simply couldn’t break through the Manhattan back line.

Time and again, the Thunderbirds rushed forward through the midfield of Bishop Stadium and toward the Manhattan goal. Every chance, they were sent backward by one of Manhattan’s four defenders. or a helping midfielder from time to time.

It was that defensive effort that allowed Manhattan to hold on to a 2-1 win over Shawnee Heights Thursday to conclude its regular season.

Manhattan (9-5-1) relied on its backline throughout the night to stifle Shawnee Heights’ chances. Even though possession during the game was roughly equal between the two teams, the number of opportunities heavily favored the Indians.

MHS converted the first of those chances just a minute and a half into the game.

Following a deflection out of bounds, midfielder Cole Schmitt played a corner kick perfectly into the middle of the 18-yard box. There, it was met by fellow midfielder Johannes Glymour, who soared through the air uncontested to glance the ball off his head and into the far corner of the net. With 38:39 left in the first half, it already was 1-0 Manhattan.

“I don’t think we’ve come out all season and scored that soon,” MHS head coach Michael Sanchez said. “It was nice and refreshing to get a little off our back early on and get the momentum and put more pressure on their back.”

Manhattan had several other chances throughout the first half, including one opportunity from forward Grant Snowden that narrowly sailed over the crossbar with 32:25 left in the half, but was unable to convert any of them. In contrast, Shawnee Heights struggled to put the ball into threatening positions, often finding itself dispossessed before it could come within 30 yards of the net.

Some of these chances were taken away because of a tactical change Manhattan has implemented, according to defender Easton Roberts. Now, Manhattan’s forwards are dropping deeper when the team is defending, compressing the space opposing offenses have to operate.

“The overall energy back there is to not let anybody get by,” Roberts said. “Staying organized is the key thing to do. What’s helping us get through is our talking, our communication, letting each other know if there is a guy going back, telling each other when to step up or drop. It’s just making sure we’re working as a team.”

The trend continued well into the second half, as Manhattan clamped down on any Shawnee Heights attack before it could fully manifest.

The defense was buoyed by an insurance goal by midfielder Ibrahim Ciftci with 27:26 left in the game. The goal was set up by a sublime through ball by midfielder Connor Turner to play Schmitt into the 18-yard box. Schmitt then played a low cross across the box to Ciftci’s foot.

From there, it was a simple tap-in.

Manhattan’s only goal allowed came with 2:40 remaining. The Indians lost their shutout thanks to a penalty kick.

The penalty came when Manhattan defender Lucas Smith-Caldas and Shawnee Heights forward Johnny Jasso-Guardian got tangled up inside the MHS 18-yard box.

Jasso-Guardian went straight down the middle with his shot as Manhattan goalkeeper Caleb Deloach dove to his left. Suddenly, Manhattan’s lead seemed much less secure.

“In soccer, anything can happen,” Sanchez said. “You can get a goal or two goals in less than three minutes.”

Despite a few tense moments, the Indians were able to stave off a Shawnee Heights comeback. The win sends Manhattan into the postseason on a thee-game winning streak.

The regional, which will be held at Wichita-Northwest High School, will be contested between MHS, Junction City, Topeka High and Washburn Rural. The first round of games will take place Monday and Tuesday, with the regional championship coming next Thursday.

The regional seeding will be announced Saturday.

“We just have to keep the energy and momentum going,” Roberts said. “We need to really believe we’re going to win, because we have the confidence and energy level to keep playing.”