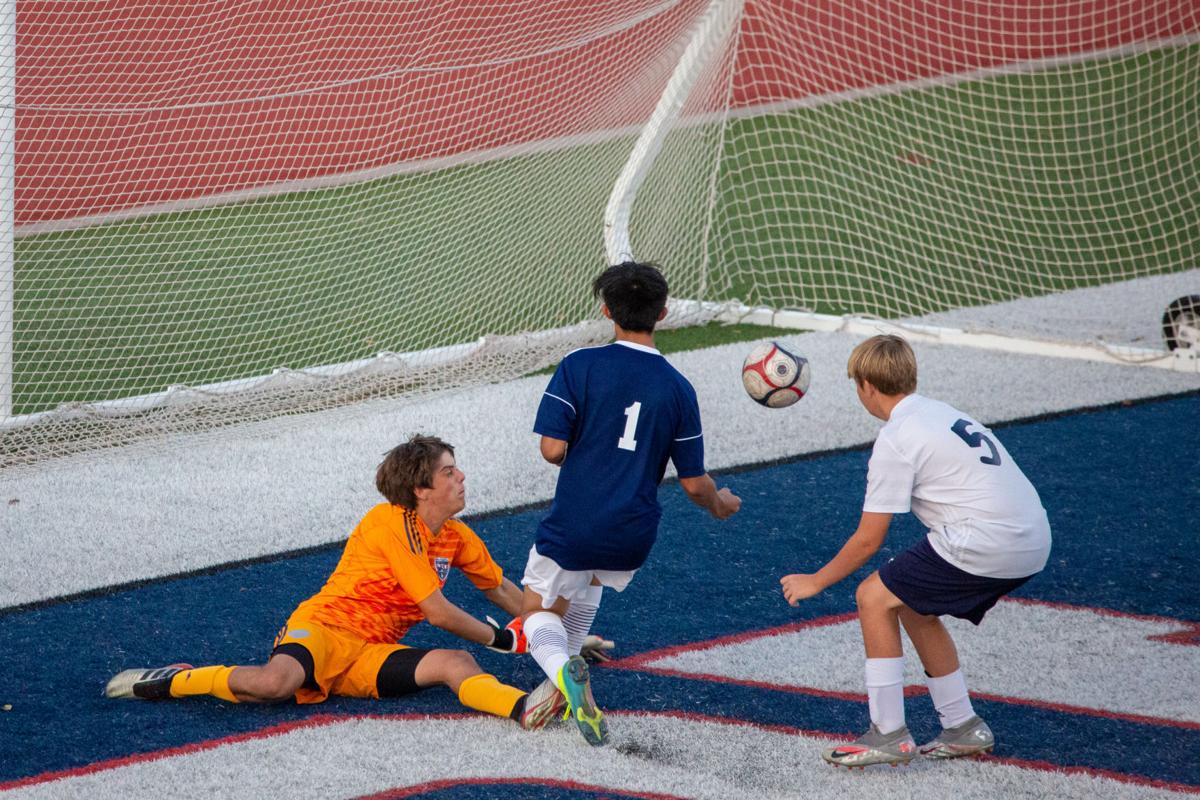 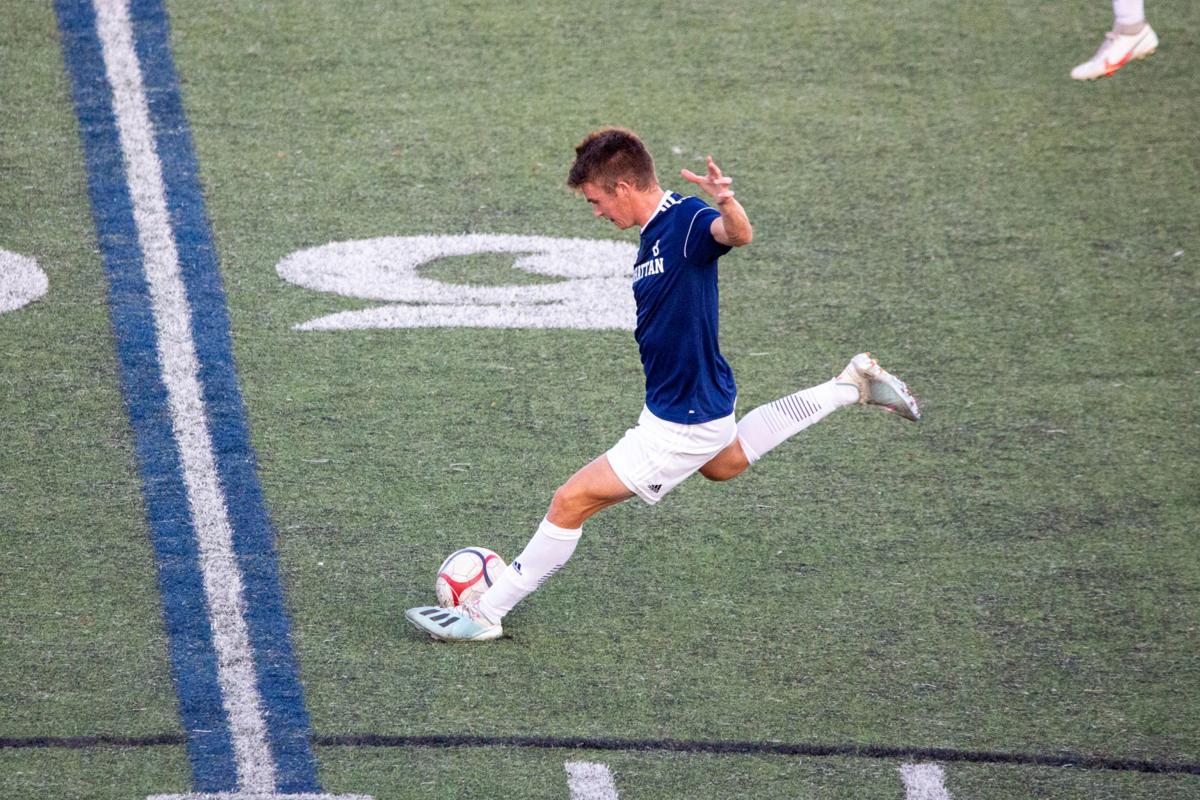 Really, the score could have been much worse.

Manhattan’s boys soccer team walked off the Bishop Stadium pitch Tuesday night, 3-0 victors over Hayden. While the scoreline was convincing enough, it really could have been closer to 6-0 or 7-0.

“I’m glad to see them take shots from outside the (18-yard box),” MHS head coach Mike Sanchez said. “That draws numbers out of the box and we can find people in behind the lines.”

Still, Manhattan’s boys’ soccer team will take the win no matter how it comes. The Indians (5-4-1) now are winners of three of their last four games as the team’s regular-season schedule draws closer to an end.

Manhattan’s performance Tuesday night almost was a polar opposite of the Indians’ last game at Bishop Stadium. That day, a 3-2 loss to Dodge City, MHS played individually, with players opting to dribble more and not trust their teammates to create opportunities if passed the ball.

After that game, the team spent close to 10 minutes in a huddle, with coaches and players alike imploring team members to play as a unit. Tuesday was evidence the instruction was paying off.

In the game’s opening 10 minutes, it was rare for a player to take more two touches on the ball before giving it to a teammate. The Indians picked their way down field almost at will, working the ball between players faster than their Hayden counterparts could keep up.

“Tonight, we were just feeling it,” forward Gedrick Comiso said. “We’re down two strikers, so we had to pick it up, and it showed.”

However, it didn’t immediately turn into goals.

Almost the entirety of the opening half hour was dominated by missed opportunity after missed opportunity from Manhattan. MHS had multiple chances to get off an open shot inside the 18-yard box. However, the Indians consistently were unable to put the ball on frame.

But with each passing opportunity, the law of averages shifted more and more in Manhattan’s favor. Finally, with just over 10 minutes to go, the wall in front of Hayden’s net lifted.

It started with an excellently played through ball from midfielder Cole Schmitt to overlapping defender Lucas Smith-Caldas. The pass gave Smith-Caldas a wide open lane to the touch line, but not to the goal.

Smith-Caldas sprinted toward the line before chopping the ball back to an oncoming Comiso.

Comiso lifted the ball over Hayden goalkeeper Gabe Rankey and past another defender into the far corner of the net.

“I was just trying to be in the right position for anything, really,” Comiso said. “You have to be ready for anything in soccer, especially at our level. I just wanted to make sure I was there just in case and it worked out both times.”

Comiso also played a part in Manhattan’s next goal moments later, though this time he was the one feeding the ball to a teammate.

The opportunity was set up by a Hayden turnover deep inside its own half. MHS, which spent the majority of the night playing a high press, forced an errant pass, giving the Indians a four-on-three advantage as they advanced the ball.

A pass was played to Comiso, who glided toward the center of the field before playing a through ball of his own to winger Gabe Effiong, who crashed toward the middle of the box to beat his defender.

Effiong’s goal wasn’t so much off a shot as it was a dribble. Once again, Rankey came out to meet the shooter to cut down the angle.

Effiong nudged the ball to the right of Rankey before crashing into the goalkeeper. The collision left the ball rolling toward the net with nobody there to stop it; eventually, it crossed the goal line uncontested.

From there, Manhattan essentially cruised to a victory.

The team’s press defense prevented Hayden from creating any solid opportunities, while allowing MHS to run out the clock.

“They had a lot of numbers behind the ball, so we were just trying to get what we could forward to create some opportunities,” Sanchez said.

MHS didn’t let up offensively just because it had a 2-0 lead heading into halftime, though.

The second half still afforded numerous scoring opportunities for the Indians.

One, a curling effort from midfielder Cade Cameron from just outside the 18-yard box, was parried away by Rankey inches in front of the goal line. Another, a short-range blast from forward Josh Lee, crashed off the upper-left corner of the goal frame and back into play.

Lee was able to convert one of his chances in the half, however. Following a loose ball off a corner, Lee found himself with the ball at his feet a few yards in front of the net.

The forward went for power, ripping a shot into the back of the net with just under 15 minutes remaining in the game to effectively seal Manhattan’s win.

The Indians already know their postseason regional foes — Junction City, Topeka High and Washburn-Rural — and now are in a chase for better seeding in the competition.

“We never know until we get there usually,” Sanchez said. “Last week, we were like, ‘OK, here’s what could happen ...’ trying to see how the seeding would play out, but this year, they’re just doing it in pods.”

Joey Wagner: A confident buildup to another letdown for Illinois — this time because of the offense

70 at 50: Nebraska's rush to success included a pair of secret weapons with big-time legs