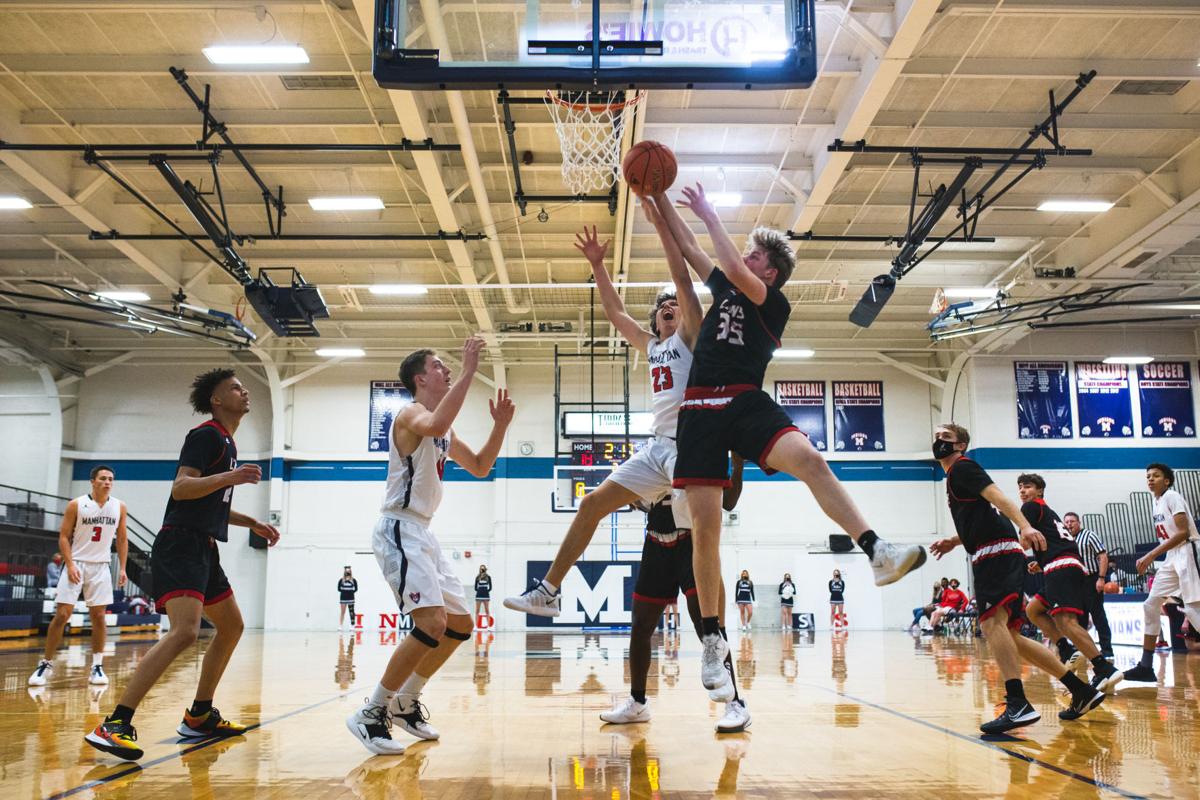 Manhattan junior Cade Perkins (23) goes up for a rebound in Saturday night’s game against Lawrence. The Indians dropped their season opener to the Lions 64-46. 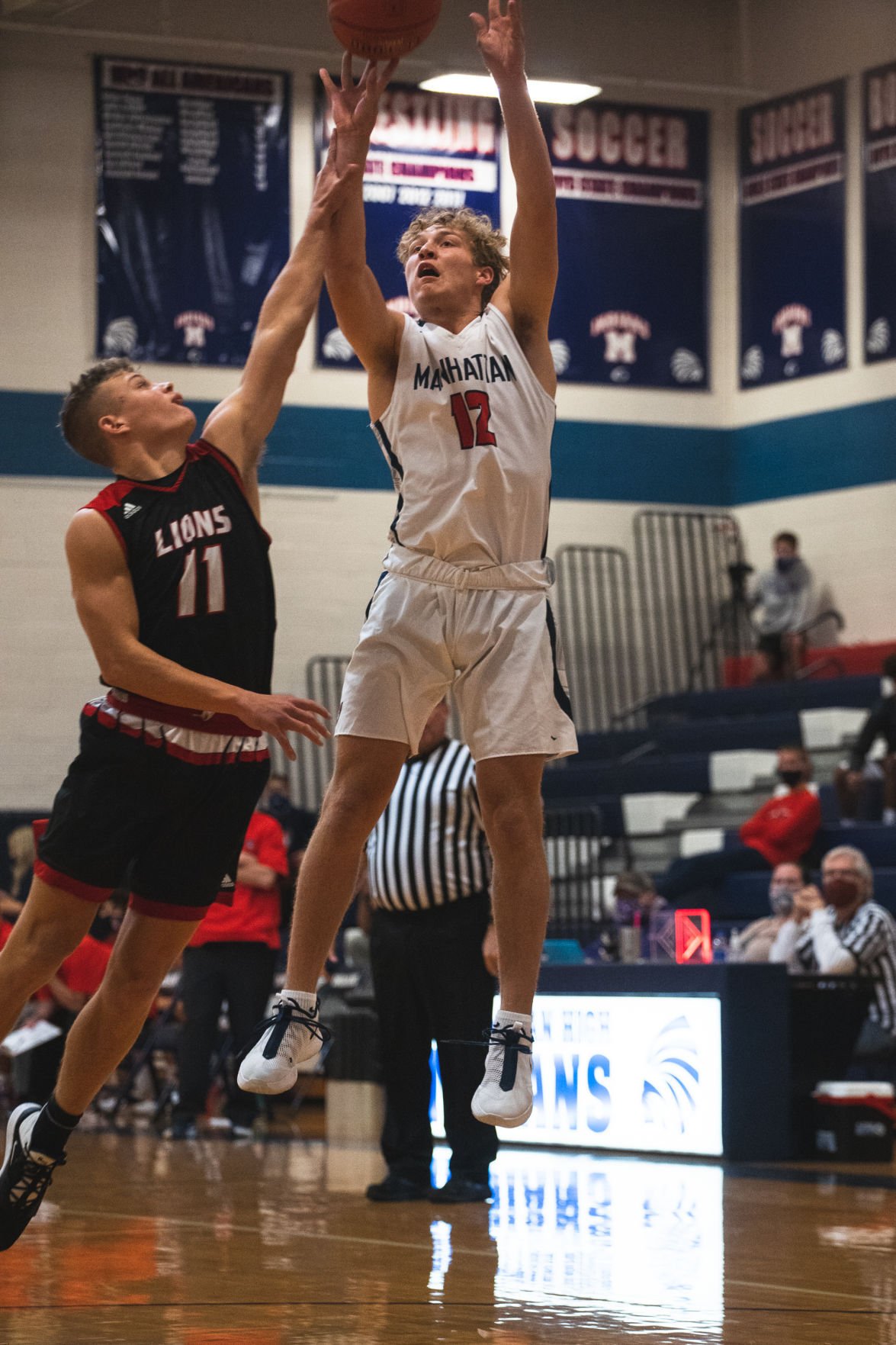 Manhattan point guard Owen Braxmeyer (12) shoots a jump shot in Saturday night’s season opener against Lawrence. A limited number of fans will be allowed at Manhattan’s winter sporting events following a reversal of the KSHSAA’s original decision to bar fans until Jan. 28.

Manhattan junior Cade Perkins (23) goes up for a rebound in Saturday night’s game against Lawrence. The Indians dropped their season opener to the Lions 64-46.

Manhattan point guard Owen Braxmeyer (12) shoots a jump shot in Saturday night’s season opener against Lawrence. A limited number of fans will be allowed at Manhattan’s winter sporting events following a reversal of the KSHSAA’s original decision to bar fans until Jan. 28.

In a tight game, the shot would have solicited a roar of approval from the Manhattan bench. This time, however, there was only a smattering of claps echoing through the empty Manhattan gym.

The shot brought Manhattan back within 20 points of Lawrence. It was the last made basket in the game, as the buzzer sounded on Manhattan’s first loss of the season: a 64-46 defeat against the Lions.

The only significance of Coonrod’s make was that it marked Manhattan’s lone bucket of the fourth quarter. Prior to that point, MHS had missed all nine of its attempts in the period.

It was that kind of night for the Indians (0-1), as the team shot just 30% from the floor and 25% from deep. The lid even was on the basket when Manhattan attempted free throws, as the team converted just seven of its 15 attempts from the charity stripe.

“I think a lot of it was just shots not falling,” MHS head coach Benji George said. “Going into practice, I thought shot-making would be a question mark. But through 16 practices, we’ve shot the ball so well. So it wasn’t something I was concerned about coming into tonight. A lot of it was finishing, so that’s frustrating.”

From the opening minute, it was clear Manhattan would rely on senior guard Owen Braxmeyer for much of its scoring output. Possessions in which Braxmeyer didn’t touch the ball were scarce, as the senior handled point guard duties.

Lawrence sensed Manhattan’s strategy, throwing an assortment of defenders at the senior in hopes of slowing him down.

The counter strategy worked, as Braxmeyer was limited to 10 points on 4-of-16 shooting.

Despite Braxmeyer’s struggles, Manhattan remained relatively close to Lawrence through much of the first half thanks to its defense. The Indians played a full-court trap, which forced subsequently led to seven first-half turnovers from the Lions.

Lawrence High’s coaching staff could be heard discussing how to break Manhattan’s defense as the turnovers continued to pile up. Just before the end of the first half, the Lions decided on their solution.

To beat the press, Lawrence attempted to pass the ball directly down the flank instead of trying to work it through the center of the court. From there, a player would cut from mid court, often finding himself wide open on his way to the rim.

The result was a third quarter in which Lawrence made 71% of its shots.

“Some of it was fatigue, but I still think our press did what we wanted it to do,” George said. “I thought it slowed them down a little bit, gave us some opportunities for turnover buckets.”

From that point on, Manhattan simply didn’t have the firepower to play catch up.

Lawrence switched to a 2-3 zone in the fourth quarter, forcing Manhattan to shoot from deep. The Indians never found their stroke, shooting 14% from deep in the second half and 22% from beyond the arc overall.

“It’s just speed of the game and some guys being under the bright lights for the first time,” George said. “We’ve showed it in practice. I still do believe we have some guys who can knock down shots. I believe we’ll get there in that regard.”

As Manhattan’s shooting woes became more and more apparent, Lawrence continued to carve up Manhattan’s defense. Senior guard Zeke Mayo appeared unstoppable, as he converted 11 of his 16 shots, including a spectacular driving dunk despite being fouled on his way up, for 28 points.

Now, Manhattan will have to go back to the drawing board ahead of next Friday’s home game against Hayden.

George came away from the night with positives. Besides Braxmeyer, many of Manhattan’s players had just played their first major minutes at the varsity level. Growing pains always were going to happen. For at least a half, his team hung in with Lawrence, which last season was the No. 5 team in the 6A state tournament.

“It’s the first game of the year,” George said. “You play Lawrence High, win or lose, you play them to get better. They’re a program with pedigree, like ours is, and that’s the biggest key. I told the guys before the game that regardless of the outcome, we’re going to come in a better game next week.”