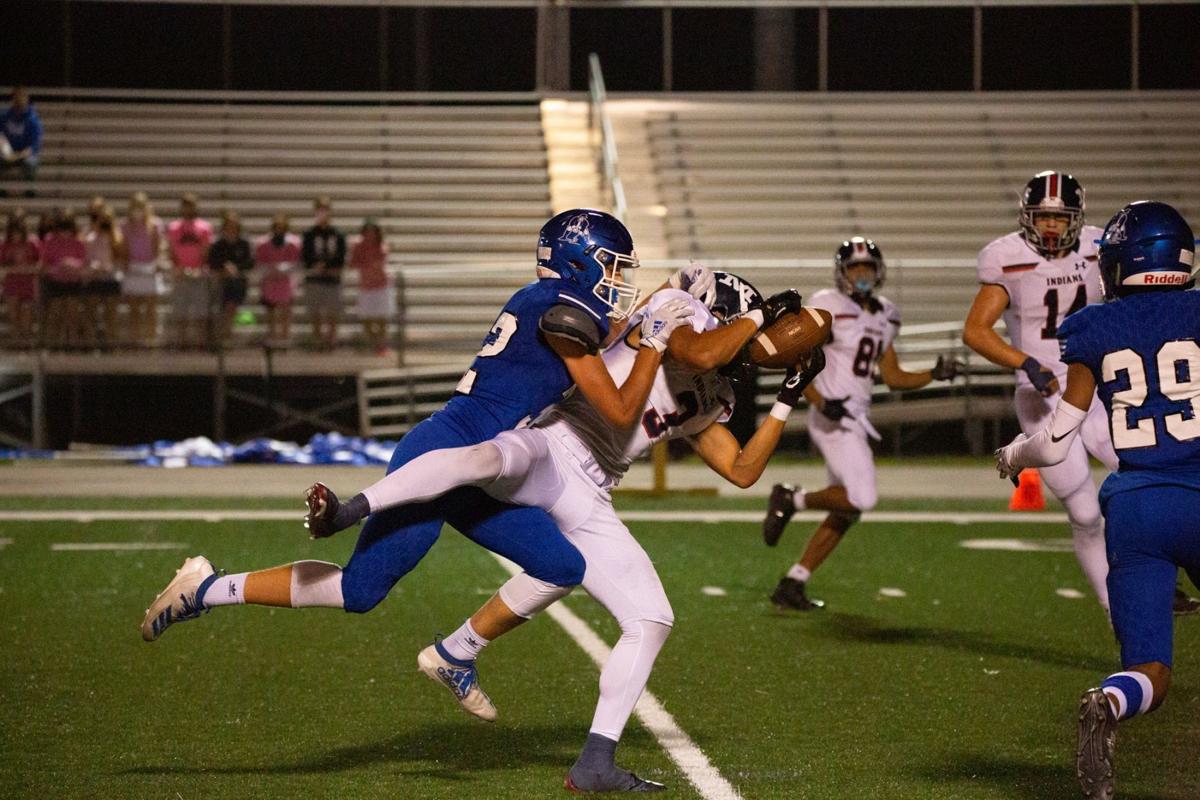 Manhattan wide receiver Joe Hall (3) makes a contested catch Friday at Washburn Rural. MHS will look to build off Friday’s win as it heads into the final stretch of its season. 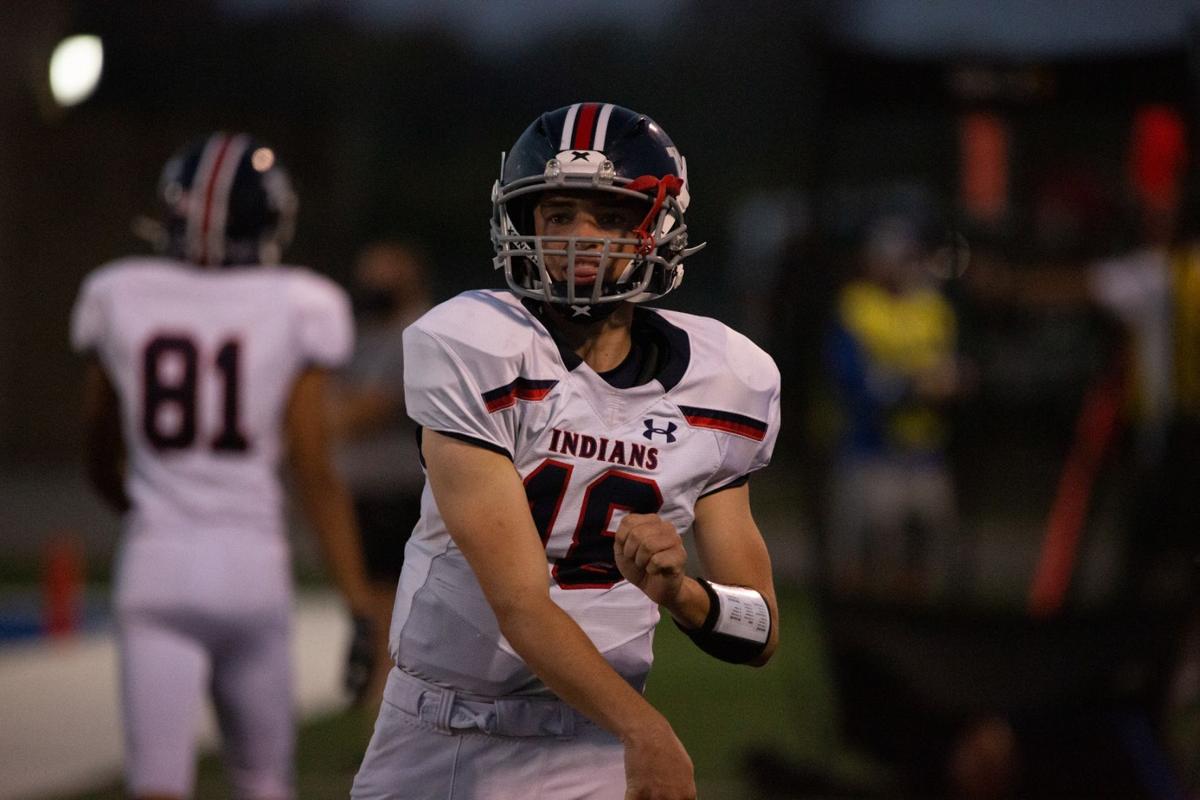 Manhattan quarterback Keenan Schartz warms up ahead of the team’s game against Washburn Rural last Friday. Schartz will likely continue to start at quarterback for MHS.

Manhattan wide receiver Joe Hall (3) makes a contested catch Friday at Washburn Rural. MHS will look to build off Friday’s win as it heads into the final stretch of its season.

Manhattan quarterback Keenan Schartz warms up ahead of the team’s game against Washburn Rural last Friday. Schartz will likely continue to start at quarterback for MHS.

The Manhattan High football team finally broke through a wall that has stood in its way all season.

MHS has suffered through its share of crushing defeats this season. There was the late-game loss to rival Junction City, and the numerous turnovers against Seaman. Manhattan’s wins largely were uninspiring, as the opponents never really were in the games from the start.

Put more simply, whenever Manhattan experienced emotion from a game, it usually was not positive.

That changed last Friday, when the Indians defeated Washburn Rural on a two-point conversion in overtime to pick up their third win of the season. Instead of walking off the field in dejection, Manhattan’s players sprinted toward the locker room whooping with joy.

“It’s just something that hasn’t happened this year,” MHS head coach Joe Schartz said. “We’ve been in every game. We’ve been competitive and had chances to win every game. Up until Friday night against Washburn Rural, when those moments came up we just didn’t step up.”

Now, Manhattan is trying to build off the momentum of its crucial win to close out the final two games of its season.

Manhattan made a number of key changes that led to its win over Washburn Rural. All of them started in the backfield.

For one, running back Lorenzo Wilhoite returned to the field for MHS after missing three games due to injury. Wilhoite ran for 96 yards and a touchdown while averaging 5.64 yards per carry.

“Getting Lorenzo back was very big for us,” Schartz said. “It adds another dimension to our offense with some speed. It’s tough to coach speed.”

MHS also altered things at starting quarterback, with sophomore Keenan Schartz taking the majority of the snaps instead of Dayne Aschenbrenner.

While Keenan Schartz’s numbers weren’t outstanding, — 69 passing yards on 4-of-8 passing with one touchdown and one interception — he provided a certain steadiness to the position that Manhattan has struggled with so far this year.

He limited the team’s turnovers while giving MHS a more consistent downfield threat than Aschenbrenner had over the first five games.

For his part, Aschenbrenner took on an even bigger role in the team’s running game. While he had a few snaps at quarterback, Aschenbrenner lined up at running back for the majority of the game.

Aschenbrenner’s extended time as a running back partly is a function of the absence of running back Vincent Smith. With Smith’s status for Friday’s game still undecided, Joe Schartz indicated Aschenbrenner may continue to take more snaps at running back while Keenan Schartz will continue as the team’s quarterback.

“Keenan is still taking a lot of the reps at quarterback, but Dayne being a three year starter, he’s more than ready to take over at any time,” Joe Schartz said. “From week to week, it’s just about matchups and the game plan about who’s going to do what.”

Manhattan’s passing game could play a big role on Friday against Topeka West. The Chargers, who are allowing an average of 60 points per game, have struggled mightily this season defending the pass.

Manhattan, for its part, has stayed away from relying on its passing game. However, for MHS to fully take advantage of Topeka West’s defensive inadequacies, the Indians will need to find ways to attack the Chargers through the air.

“They play good run defense,” Schartz said. “Their breakdowns have been in the secondary and giving up big plays. Here again, you talk about matchups, we’ve struggled throwing the ball. We’re going to have to run the football and establish the run, but we’ll need to get some big plays in the passing game to keep them honest.”

The Chargers (1-2) pose a more interesting question to Manhattan defensively. After struggling in its first two games to put the ball in the end zone, Topeka West mounted a massive comeback against Highland Park to win 59-58 last week.

“They have a sophomore quarterback (Malachi Berg) who’s 6-foot-2, 185 pounds. He throws the ball well,” Schartz said. “He has three big wide receivers who are 6-foot-3 and above and weigh from 185 all the way to 215 pounds. It’s going to be tough matchups for us. That’s something we’ve struggled with is pass defense.”

While Manhattan’s secondary has continued to struggle with allowing big plays throughout the season, the MHS defensive line has stepped up its pressure on opposing quarterbacks. A large part of that has stemmed from defensive lineman Damian Ilalio.

The reigning Centennial League defensive player of the year and Kansas State commit has recorded 13.5 tackles, six tackles for loss and 2.5 sacks over his last two games. Those numbers are almost unheard of for a defensive lineman.

MHS will continue to rely on Ilalio and continued improvement from its offense as it heads into arguably the softest stretch of its season. With two games remaining, Manhattan is sitting as the No. 7 seed in the West bracket for the KSHSAA playoffs. The Indians conceivably could improve to a No. 6 seed and possibly a No. 5 seed by winning its final two regular-season games against Topeka West and then Emporia.

“We just talk about building off the momentum,” Schartz said. “We talked going into the season about every game and every point mattering. This week’s no different. We need to go 1-0 and if at all possible, we need to try to get the 13-point margin that goes toward the tiebreaker with points.”

Two-Minute Drill: No 'grand' announcement, but there's more clarity regarding the QB position