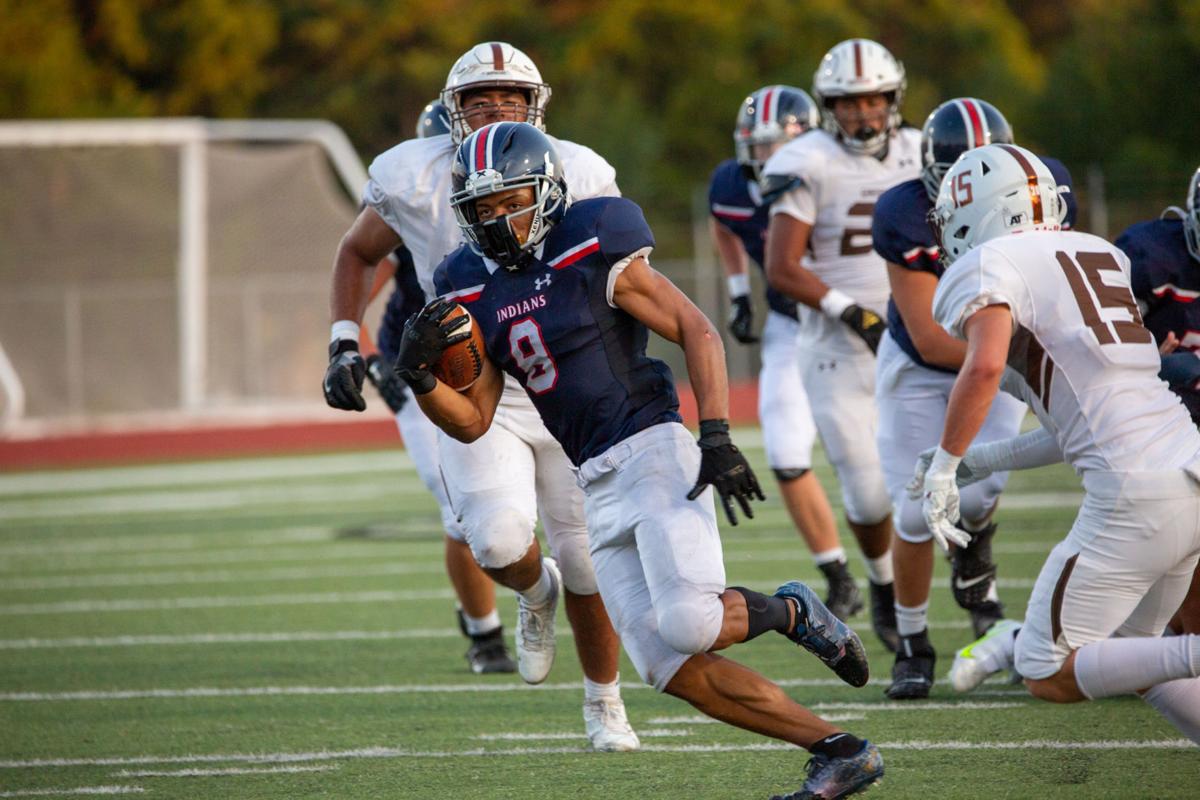 Manhattan’s Vincent Smith (No. 8) clutches the ball as he runs down the field Sept. 4 against Garden City. Manhattan will face Garden City again to open the playoffs. 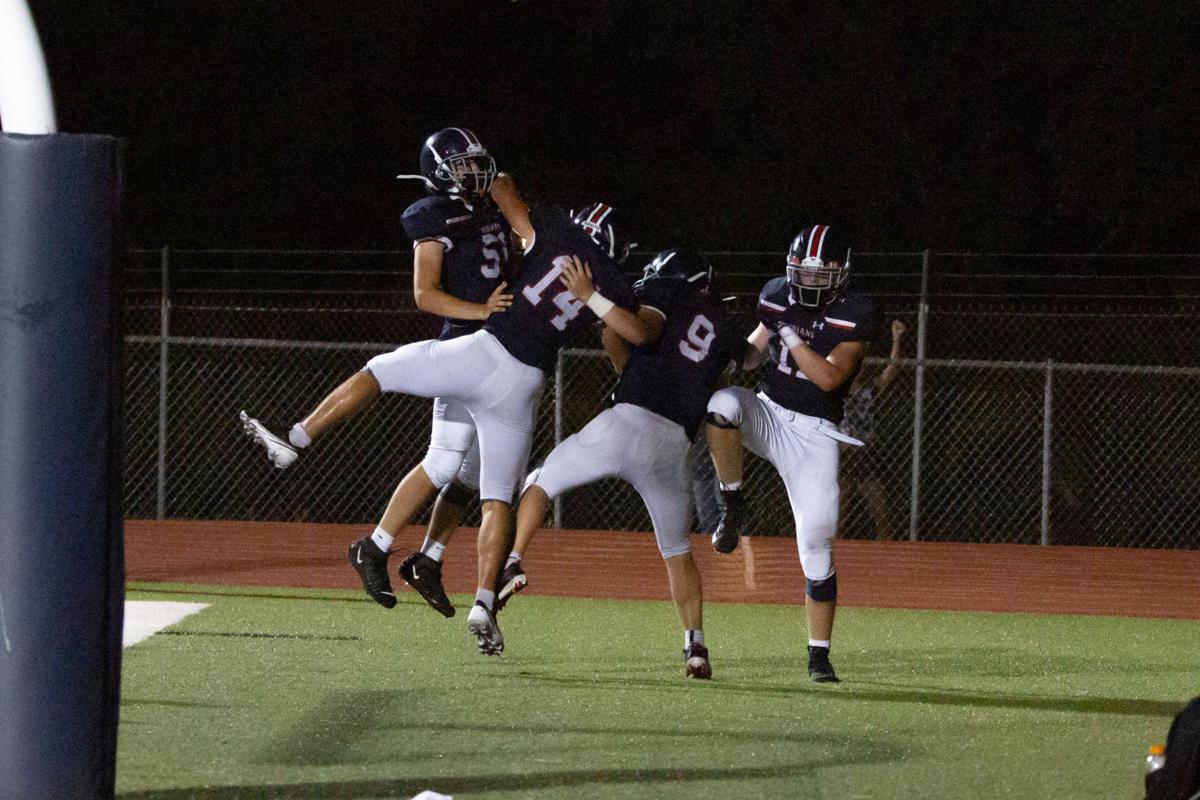 Manhattan High celebrates final touchdown of the night against Garden City Sept. 4. MHS will play Garden City again on Friday in the first round of the Class 6A state playoffs.

Manhattan’s Vincent Smith (No. 8) clutches the ball as he runs down the field Sept. 4 against Garden City. Manhattan will face Garden City again to open the playoffs.

Manhattan High celebrates final touchdown of the night against Garden City Sept. 4. MHS will play Garden City again on Friday in the first round of the Class 6A state playoffs.

Manhattan is no stranger to its opponent in the first round of the 2020 6A playoffs. However, the memory of its last meeting with the team it is set to go up against isn’t one the Indians are eager to remember.

Manhattan will face Garden City on Friday at Bishop Stadium in a rematch of the two schools’ season opener — one which Manhattan won 21-7. That meeting wasn’t for the faint of heart, as the two teams combined for six turnovers and generally showcased the struggles common in an opening game.

The rematch was slightly unexpected when Schartz viewed the standings, as it appeared Manhattan — the No. 6 seed in the West bracket — would rematch instead with Washburn Rural, which finished ranked No. 11.

However, due to the coronavirus pandemic, standings were altered to fit teams unable to play as many games. The result was a 2-3 Topeka High team leapfrogging 3-5 Garden City, Washburn Rural and Dodge City.

The rest of the standings were decided by point differential, of which Garden City had the worst average. The result is another road trip to Manhattan for the Buffaloes.

Both teams will look different heading into this matchup than they did ahead of the season.

For starters, Garden City is operating with a quarterback other than Zane Burns, who threw for 131 yards and rushed for another 35. Now, the Buffaloes are starting sophomore Caleb Wiese under center. Wiese has thrown three touchdowns to five interceptions in seven appearances.

Garden City enters the game at 3-5. The Buffaloes struggled offensively to start the season, averaging just nine points per game in their opening six games.

Since then, Garden City has scored 38 and 45 points in its final two games to enter the playoffs with a small dose of momentum.

MHS has reason to believe the Buffaloes have more talent than their record shows. After all, they were just yards away from tying Manhattan at 14 with 10 minutes remaining in the game.

The Manhattan defensive line forced a fumbled snap and recovered it before Garden City could inflict damage. The Indians then iced the game on a touchdown with half a minute remaining in the game.

“They were right there with us the first time,” Schartz said. “They were on our goal line ready to score the tying touchdown, and Darius (O’Connell) disrupted their snap and caused the fumble. It was a very close game the first time. It’ll be an interesting night.”

One thing that hasn’t changed about Garden City is its size. The Buffaloes still will bring left tackle/defensive lineman Trey Nuzum, a 285-pound behemoth, and several other large presences to challenge Manhattan in the trenches.

MHS won the first battle utilizing speed along the lines, crossing the oppositions’ faces to disrupt their power. Now, Schartz and the Indians will use Friday’s game as a measuring stick to see how far they’ve come since the start of the season.

“It’s a different situation, but I know we’ve made a lot of improvements,” Schartz said. “We’ll be able to see how far we’ve come. Garden City is in the same boat.”

One area Schartz is looking for improvement in is the team’s turnover ratio. Quarterback Dayne Aschenbrenner threw three interceptions in the teams’ first meeting.

However, Manhattan hasn’t turned the ball over once in either of its last two games. The Indians also have taken advantage of a new area of the game: special teams.

Safety Ty Jackson has turned into a threat in the return game, returning three punts for touchdowns and averaging 26 yards per punt return.

“It’s a game of field position,” Schartz said. “If we can win the turnover battle and special teams, I like our chances.”

Regardless, Manhattan will take the result of the first game any day of the week. A win Friday means the team can advance. A loss sends the team home before it could even get used to the playoffs.

“It’s difficult to play an opponent that knows you,” Schartz said. “In my opinion, if you did play them before — and you don’t want to lose games — but, then the kids are more motivated and focused if you came up short. It’s a tough matchup.”