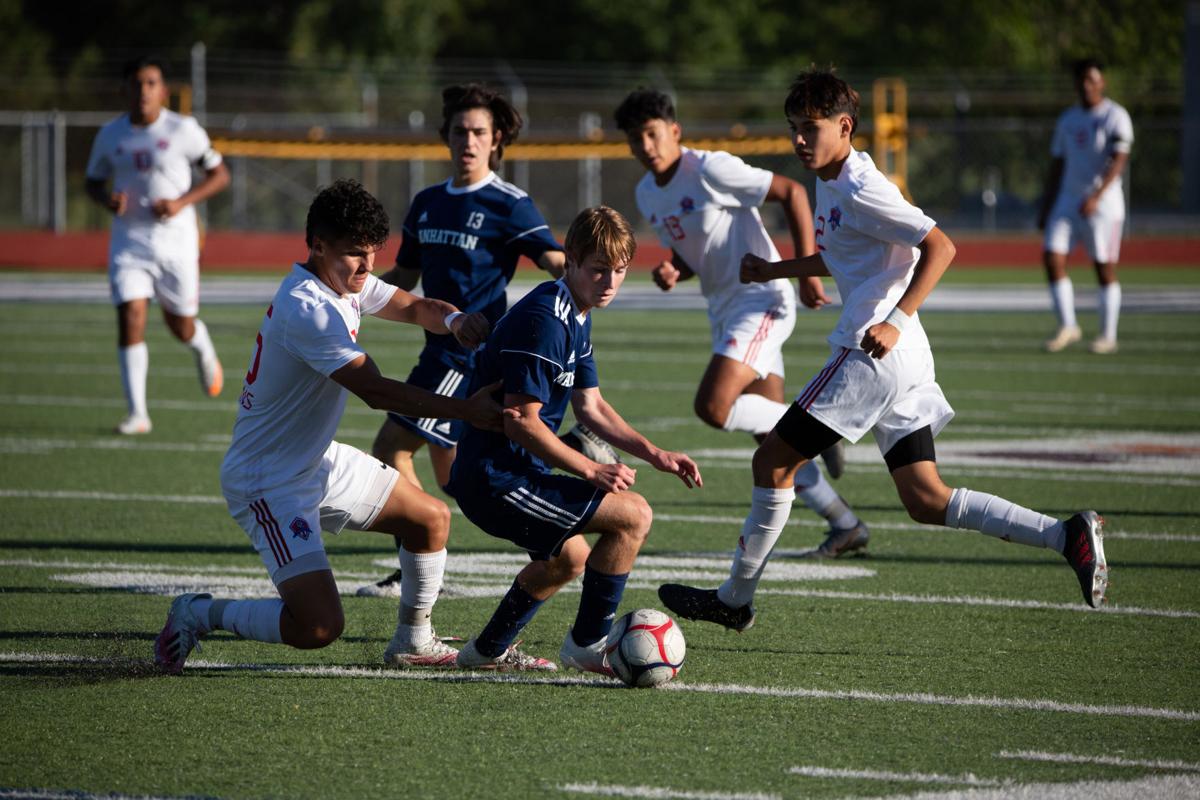 Manhattan High’s Conner Turner (center) dribbles the ball around a pack of Dodge City players during Tuesday’s game. Turner scored the Indians’ first goal Tuesday. But Dodge City went on to beat Manhattan 3-2 at Bishop Stadium. The Indians now are 3-4-1 on the season. 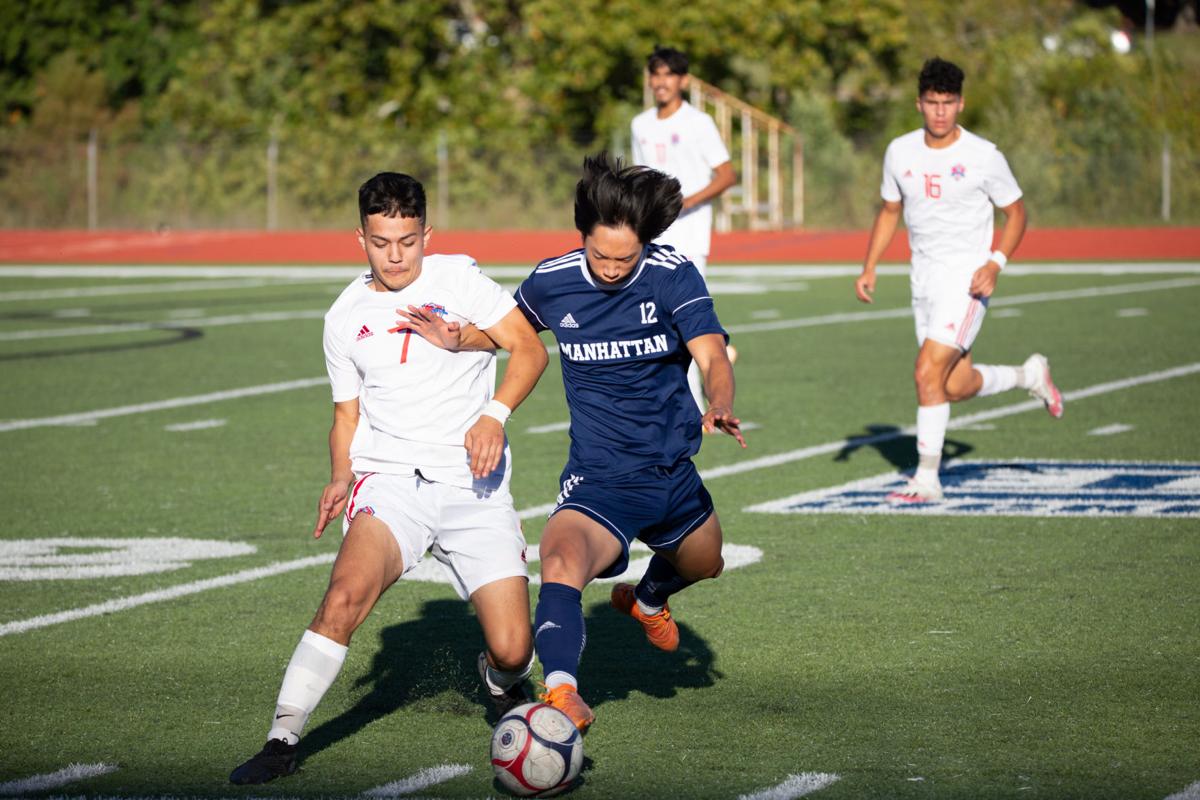 Manhattan High’s Conner Turner (center) dribbles the ball around a pack of Dodge City players during Tuesday’s game. Turner scored the Indians’ first goal Tuesday. But Dodge City went on to beat Manhattan 3-2 at Bishop Stadium. The Indians now are 3-4-1 on the season.

After the game, the Manhattan boys’ soccer team formed a circle.

A few players crouched over in exhaustion, the result of playing two games in as many days. Others stared blankly as coaches started talking about what just happened. Some, like goalkeeper Caleb Deloach, appeared visibly upset as the frustration in the coaches’ tones became more pronounced.

The Indians had just walked off the field at Bishop Stadium the losers of a 3-2 contest with Dodge City. The loss meant the team’s record was back below .500, as MHS now sits at 3-4-1.

The main source of frustration was not that the team had lost the game; it was the manner in which it lost. For large portions of the game, the Indians didn’t move with any cohesion when they had the ball.

“We weren’t moving for each other,” midfielder Cole Schmitt said. “We were mostly playing individually and I think we need to improve on that. We need to play more as a team and less as individuals.”

The game was a rematch, with Manhattan losing to Dodge City 2-1 earlier in the month.

When the two teams walked onto the field, the Indians’ already believed the conditions would be more in their favor this time around.

“The weather was way better than we went down there,” head coach Mike Sanchez said. “That’s a positive because it was 30 mph winds, cold. We were layered up.”

However, even with improved conditions, Dodge City once again came out as the aggressor. The Demons controlled possession for large periods of the first half, while the majority of Manhattan’s time on the ball concluded with a rushed clearance or turnover.

Dodge City’s time on the ball resulted in multiple near chances, including one shot from forward Alan Lopez that ricocheted off the cross bar and into the path of teammate Christopher Velez. However, Velez’s subsequent effort dribbled wide of the post.

The chance proved to be the best, but far from the only, effort Dodge City mustered in the half. In contrast, Manhattan only had two solid chances in the opening period.

It only took three minutes of the second half for the flood gates to finally burst for the Demons.

Following a deflected shot from Lopez, Velez found himself with the ball at his feet in front of a wide open net. From there, it was a simple tap-in for the game’s opening goal.

While the first goal was easy for Dodge City, the team’s second was anything but.

Following a corner kick that flew across the face of goal, Lopez gained control of the ball on the touch line. Rather than turn back toward the center, he opted to use a bicycle kick to put the ball back into the middle of the box.

The pass caught the Indians by surprise, as Velez buried it in the net with a diving header to put Dodge City up 2-0 with 30 minutes remaining in the game.

Despite the two quick punches, Manhattan still was unable to find its footing for an extended period of time. Nearly 15 minutes later, the Indians finally got on the board on a Connor Turner goal by way of a lofted through ball from Lucas Smith-Caldas.

However, Dodge City soon regained its two-goal lead as Lopez blasted a 28-yard screamer into the side netting to put the proverbial nail in Manhattan’s coffin.

While Manhattan’s Amir Eshar scored another goal for the Indians with five minutes remaining, the team effectively ran out of gas. As the minutes wound down, the toll of playing two games in two days was visible.

“I don’t want to use it as an excuse,” Sanchez said. “I think we got enough people rest (Monday) to not have it affect our play today.”

Now, Manhattan is staring at a losing record with more than half of its season completed. For Sanchez and his team, it’s gut-check time.

'It's going to suck': Badgers share thoughts of playing inside empty Camp Randall