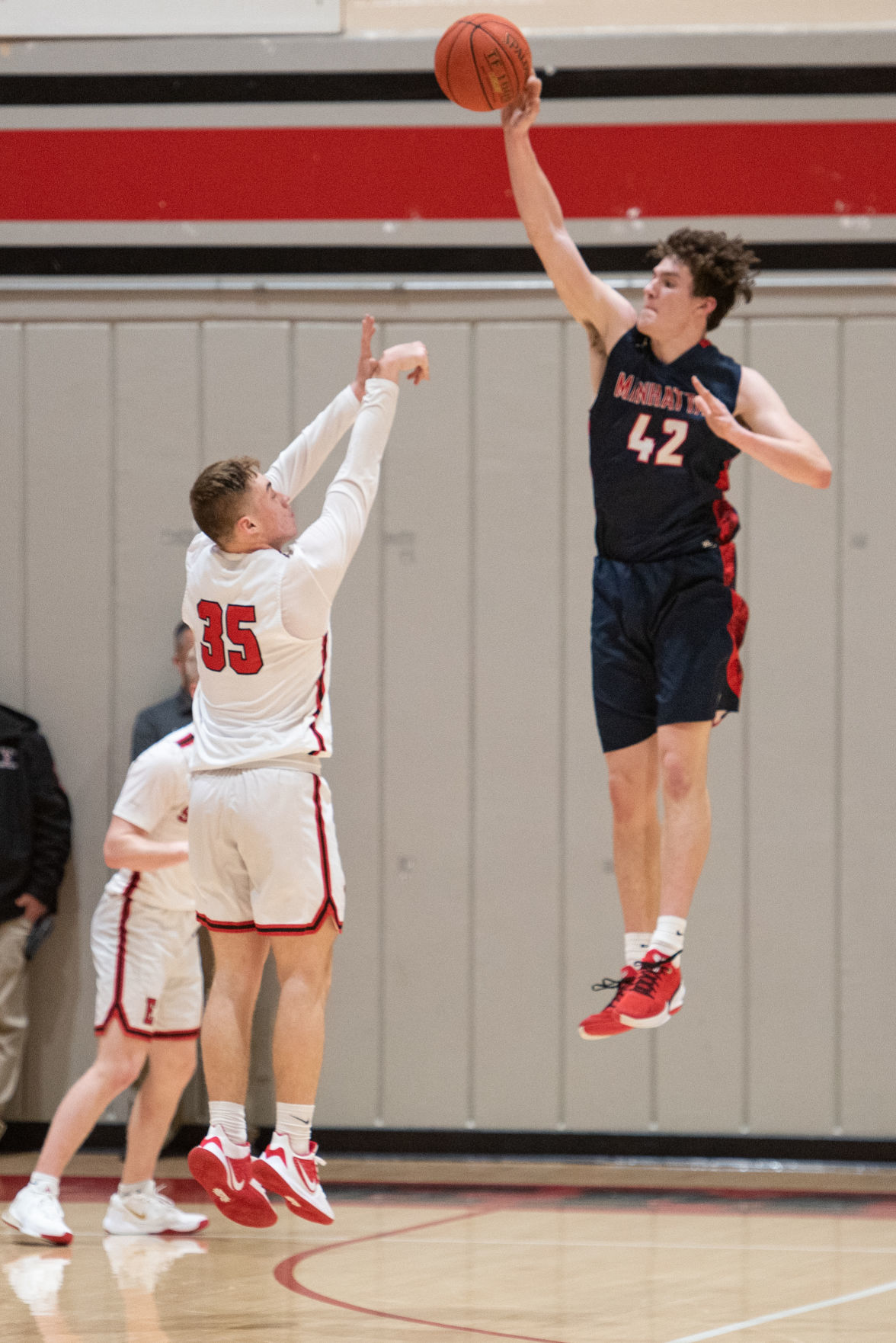 Manhattan’s Chandler Marks (42) blocks a 3-pointer attempt by Emporia’s Skyler Douglas (35) during the fourth quarter of Tuesday’s game. The No. 6 Indians held off a late push by the Spartans to pick up a 62-55 road victory. 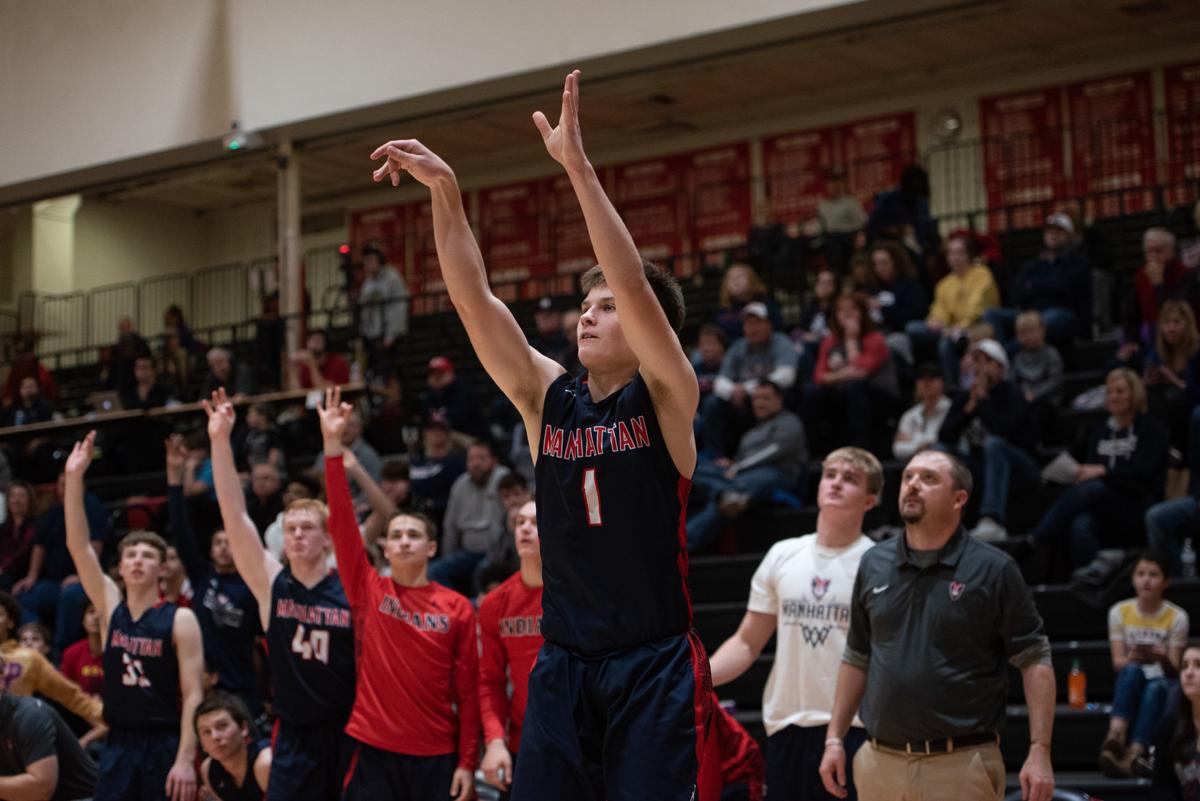 Peyton Weixelman (1) shoots and makes a 3-pointer in front of his team’s bench as time winds down in the fourth quarter. Weixelman scored a team-high 16 points in a 62-55 win for the No. 6 Indians.

Manhattan’s Chandler Marks (42) blocks a 3-pointer attempt by Emporia’s Skyler Douglas (35) during the fourth quarter of Tuesday’s game. The No. 6 Indians held off a late push by the Spartans to pick up a 62-55 road victory.

Peyton Weixelman (1) shoots and makes a 3-pointer in front of his team’s bench as time winds down in the fourth quarter. Weixelman scored a team-high 16 points in a 62-55 win for the No. 6 Indians.

EMPORIA — The hot start had dissipated and the turnovers had surfaced and all of a sudden, the Manhattan High boys found themselves locked in a close game again.

The Indians missed just four shots in the first quarter Tuesday night against Emporia, racing out to a 25-10 lead. It was a dream start for Manhattan.

Until Emporia clawed its way back into the game.

In the fourth quarter, the Spartans drew within four, taking advantage of a slew of Indian turnovers. That meant Manhattan, ranked No. 6 in Class 6A in the newest Kansas Basketball Coaches Association poll, had to buckle down and reestablish a comfortable lead.

Manhattan responded to Emporia’s late run and held on for a 62-55 win.

“I think we saw what snow days get you. They get you sloppy basketball,” Manhattan coach Benji George said, referencing his team’s Friday home game against Topeka High that was rescheduled because of inclement weather. “We were as sloppy as we’ve been all year long. It feels good to win, but I think we have higher expectations for ourselves.”

Take a look at the numbers and George’s evaluation makes more sense. The Indians (7-1, 4-1 Centennial) coughed up 21 turnovers, including seven in the second quarter and five in the fourth, and one doesn’t need to look much further for an explanation as to how the Spartans rallied back so hard.

Weixelman even splashed a late triple to hold off Emporia.

“He’s not our sixth man — he’s our sixth starter,” George said of Weixelman. “His decision-making is great. He’s had such great leadership qualities about him. He’s constantly leading, and I mentioned that in the locker room: There’s never a moment when he’s not leading.

“It’s more than just getting the ball to go through the net. He does so many other things for us. I’m just proud of him.”

Only problem: The Indians really needed those contributions late, because the Spartans never laid down.

Emporia guards Skyler Douglas and Beau Baumgardner tallied 21 and 18 points, respectively, and that was without the services of junior Charles Snyder, who entered averaging 23 points per game but didn’t play on Tuesday night.

No problem for the Spartans.

After Manhattan bolted out to a 15-point advantage after one, Emporia made things more competitive in the second. The visitors made it a five-point game on a Douglas triple, one of the four he hit on the night, and Baumgardner converted on an and-one before halftime to trim the Indians’ lead to 39-30 at the break.

By then, Manhattan had already lost 11 turnovers.

“That stretch in the second and third quarter, we were just behind defensively,” George said. “We were fumbling the ball around. I hate to sound all doom and gloom, but we’ve raised the bar for ourselves. I think the players are hungry to live up to that. Maybe, at times, we put too much pressure on ourselves.”

The third quarter played out similarly. The Spartans clawed to within two this time, using a layup from Connor Hoyt to make things even more interesting, but the Indians got a lay-in from Braxmeyer and a steal and runout from Mitch Munsen to build a six-point lead headed into the final frame.

From there, Manhattan felt more comfortable. Midway through the stanza, the Indians rattled off seven straight points, seizing a 60-48 lead. The Spartans answered with five consecutive points, but the visitors had victory in hand by then.

Manhattan made good on 5 of 9 shots in the fourth quarter to seal the win.

“We hung in there,” George said. “I thought, middle of the fourth quarter, we picked it back up. We were pretty good. We strung together some stops.”

The good news for the Indians is that they can begin to improve on their mistakes after a victory — “It’s a privilege to be able to learn those lessons in a win,” he said — and the road toward doing so starts later this week.

“We need some practices under our belt,” George said. “It’s just hard. You’re not in a routine. We’ve got to get in a routine of going to school, going to basketball practice and doing what high school basketball players do. I think that’ll help.”