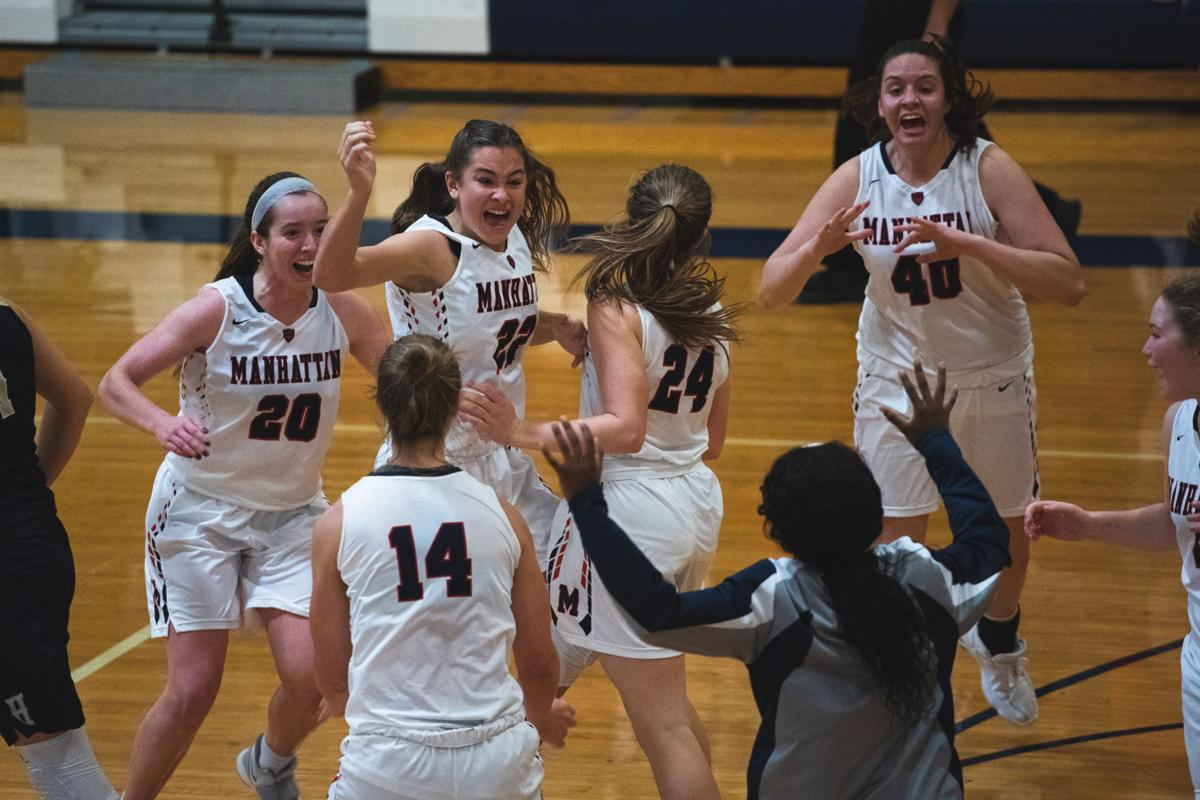 Manhattan reacts after Avery Larson (22) knocked down a buzzer-beater 3-pointer for the win against Hayden at home Friday night. The game-winning 3-pointer lifted MHS to a 48-47 win over Hayden. 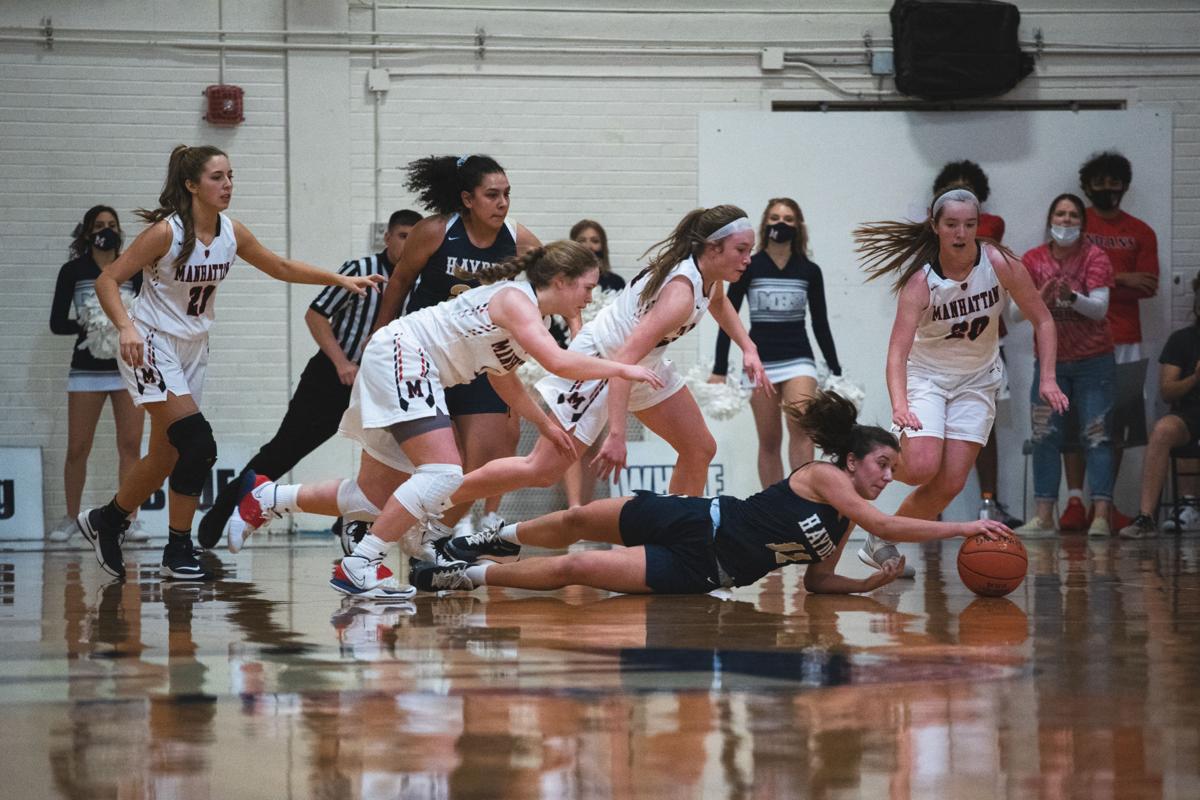 Hayden’s Macy Smith (center) dives for a ball Friday night as Manhattan defenders close in. Manhattan secured a 48-47 victory on a buzzer-beating 3-pointer from Avery Larson.

Manhattan reacts after Avery Larson (22) knocked down a buzzer-beater 3-pointer for the win against Hayden at home Friday night. The game-winning 3-pointer lifted MHS to a 48-47 win over Hayden.

Hayden’s Macy Smith (center) dives for a ball Friday night as Manhattan defenders close in. Manhattan secured a 48-47 victory on a buzzer-beating 3-pointer from Avery Larson.

Avery Larson’s first thought as she watched Hayden’s Carly Stuke shoot two free throws was to get a rebound.

At the time, the Hayden girls’ basketball team held a 47-45 lead over Manhattan High with 8.8 seconds left in Friday’s game. Stuke was at the line following an intentional foul to stop the clock.

Making both free throws — Hayden was in the double bonus — likely would have iced the game for Hayden. Stuke’s first free throw clanged off the rim, giving Manhattan life. Her second did the same.

As Larson charged to grab the rebound, she saw teammate Maxine Doering in position to haul it in. At that point, Larson flared out wide, preparing for Manhattan’s mad dash up the floor to beat the clock.

Doering dribbled up the floor before throwing a cross-court pass to Gillian Awbrey. The senior caught the ball near the corner, but immediately found a Hayden defender in her face.

It was then she saw Larson, running toward the 3-point line on her own. Awbrey found Larson with a perfect pass, catching the sophomore in rhythm as she stepped into the shot.

Larson’s deep 3-pointer from near the top of the key climbed through the air as the clock ticked below two seconds. A few tenths of a second later, it fell through the net without touching the rim. The buzzer sounded before Hayden could inbound the ball.

Manhattan’s players charged onto the floor beneath a scoreboard that read 48-47 in Manhattan’s favor.

“We knew we had to get the ball down and make a good pass,” MHS head coach Scott Mall said. “Avery is a good 3-point shooter. ... All you ask for is a chance to win the game. It may not go in, but the girls put themselves in a position to win and sometimes it does go in.”

The fact that Manhattan even was close to Hayden at that point was something of a miracle because of what the Indians had to endure to get to that point.

MHS was in foul trouble almost as soon as the game began. Starting forward Taylor Claussen picked up her second foul less than three minutes into the first quarter. Starting point guard Destiny Yates picked up two fouls on one play after being called for a reach and then assessed a technical foul after a small protest.

By halftime, Yates had three fouls, while Larson and Claussen each had two. The result was a Manhattan team that had trouble finding consistent rotations, and thus, consistent scoring.

“We were short on guards because of the situation, so we had to play a lot of forwards, which can make it hard to guard when you have three or four forwards out there,” Mall said. “Some of those girls played a lot of minutes.”

However, the Indians continued to battle. Despite having several bench players play more minutes than usual, Manhattan led Hayden 24-23 at halftime while shooting 43% from the floor and limiting Hayden to 33% shooting.

A major part of the Indians’ success was Grace Dixon. The senior center was a force for Manhattan throughout the game, converting seven of her nine attempts for 18 points, including two 3-pointers. She also locked down Hayden forward Rhen Calhoon, limiting her to four points, all of which came on free throws. Otherwise, Calhoon was 0-for-6 shooting.

“I just got on Grace about shooting 3s, because she shot a couple in the last game that didn’t look good, and tonight, she said ‘I know I can make 40% coach. I know I can.’ And she made two big ones tonight.”

However, Hayden started to find its offensive rhythm in the second half.

The Wildcats ran the ball through guard Macy Smith. The junior scored a game-high 20 points.

However, Smith had to earn those points. She only converted six of her 20 shots from the field as Manhattan’s defense kept a body on her at all times.

“She’s tough,” Mall said. “She started for them as a freshman and has gotten better every year. She’s really tough because she can go one-on-one and hit that step back. That’s a good shot for her. We had a lot of people guarding her.”

However, Manhattan’s foul trouble didn’t go away in the second half.

Yates fouled out less than a minute into the fourth quarter. Claussen and Larson also had to spend time on the bench dealing with fouls early on.

The starters’ absence was felt as Hayden opened the fourth quarter on a 7-0 run to take a 43-34 lead early in the fourth quarter. With Hayden doubling Dixon any time she caught the ball, it looked as though Manhattan wouldn’t have enough firepower to catch up as the clock ticked down.

However, MHS continued to grind. The Indians closed the Wildcats’ lead to 45-41 with just over a minute to play.

After fouling Smith, who then converted two free throws, Manhattan scored a quick basket and then forced a turnover. Claussen then hit a tough 3-pointer with 9.6 seconds remaining, setting up Larson’s eventual game-winning triple.

“We just kept saying, ‘We’ve got to play good defense, we’ve got to rebound ...’” Mall said. “We just had to keep scrapping. That’s what we did the whole game.”