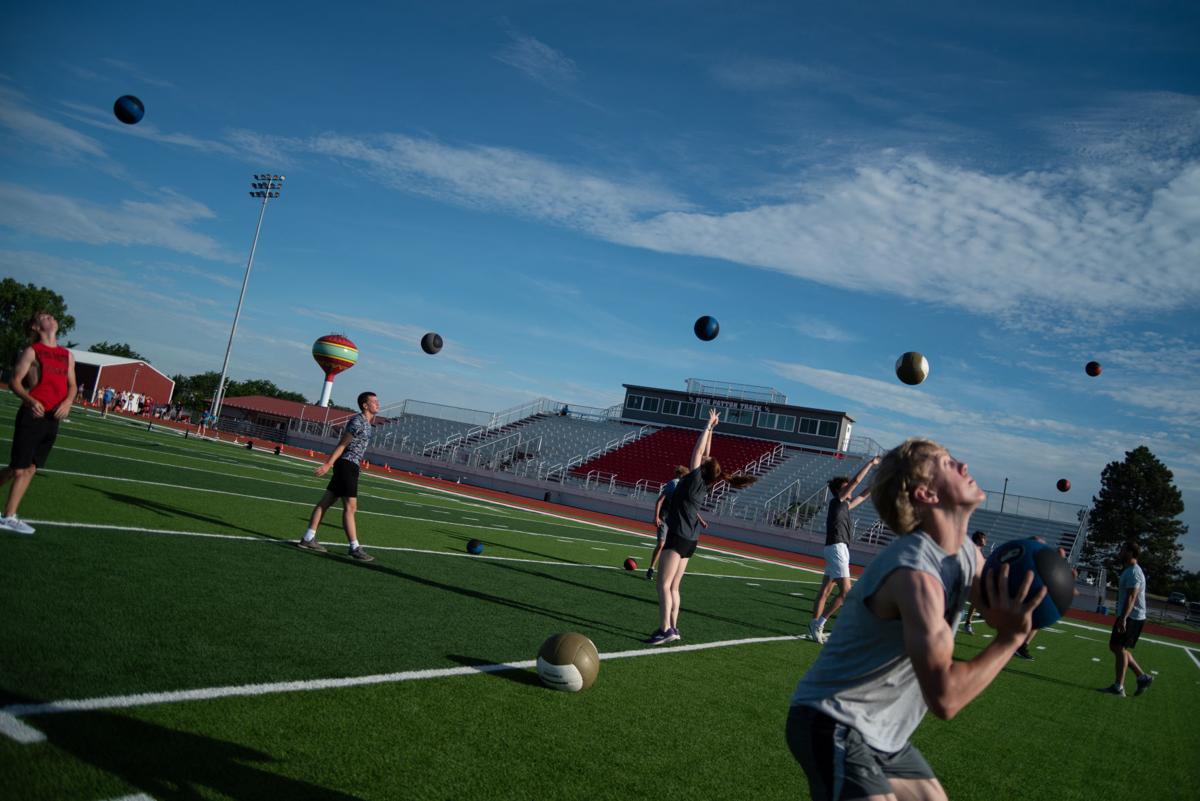 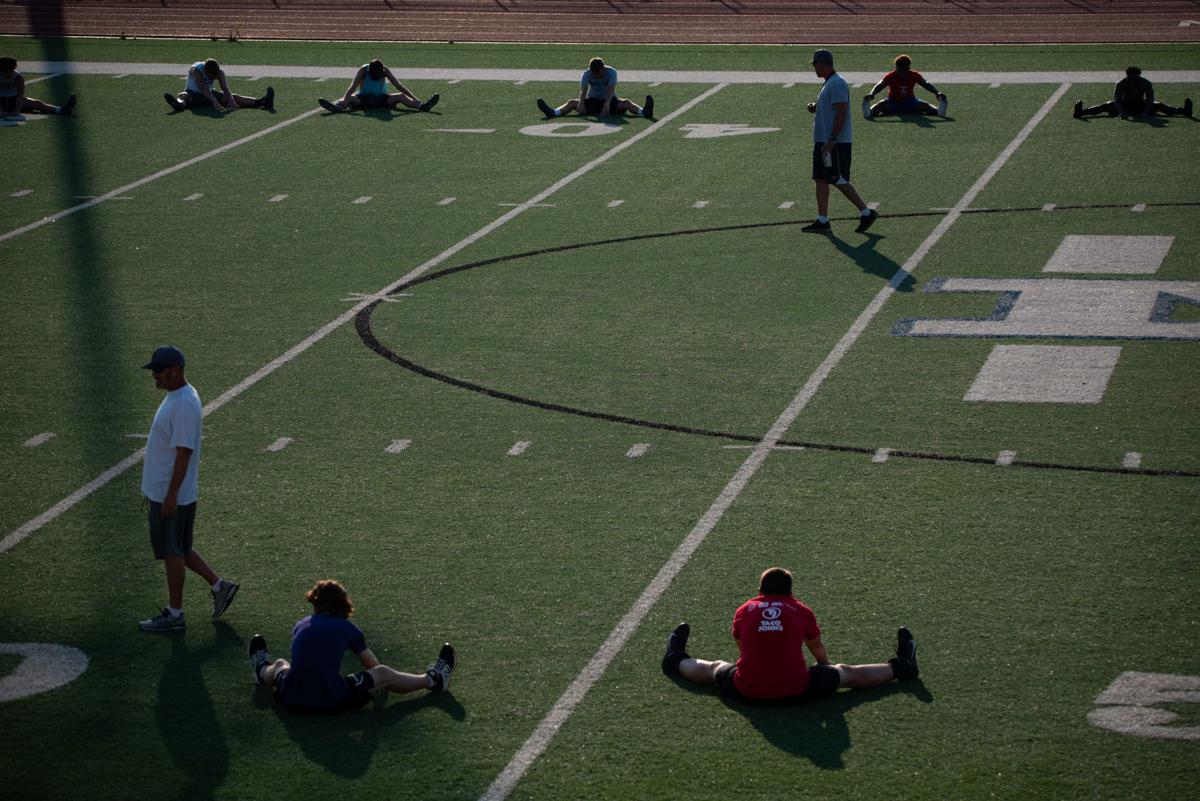 Manhattan High football coach Joe Schartz, top right, watches as Manhattan High athletes stretch during summer training at Bishop Stadium on June 16. The KSHSAA is still working through what fall sports will look like, or if they will happen.

Manhattan High football coach Joe Schartz, top right, watches as Manhattan High athletes stretch during summer training at Bishop Stadium on June 16. The KSHSAA is still working through what fall sports will look like, or if they will happen.

Contrary to a rumor circulating on Twitter Tuesday, the Kansas State High School Activities Association has not made a decision regarding the upcoming fall sports season.

The KSHSAA hosted a Zoom call Wednesday to refute a claim that it was considering a full cancellation of fall sports on July 15. The organization has not made a decision at this time, but is working toward having the fall season as planned according to KSHSAA executive director Bill Faflick.

“That rumor is totally not accurate,” Faflick said. “Unfortunately, someone was pretty irresponsible with social media and never talked with anyone here.”

Faflick and his staff are working to provide guidance to schools throughout the state. The guidance ranges from proper health protocols to what different governing bodies recommend moving forward.

Recently, schools have been reaching out to the KSHSAA regarding masking requirements during summer activities. While the organization is waiting for more details from Gov. Laura Kelly’s order for all Kansans to wear masks in public spaces, which is set to take effect Friday, Faflick encouraged people involved in high school athletics to wear a mask to slow the spread of the coronavirus.

“We support universal masking,” Faflick said. “It is important for us to take every precaution now to mitigate risk of the spread of COVID-19 so we have the best chance possible to resume school and come back to school with the healthiest student population, staff population and Kansas as possible.”

Faflick also noted that while the organization hopes the fall season can run as close to normal as possible, the KSHSAA has ensured its plans are adaptable and can be modified as the situation develops.

What happens if kids can’t be in schools?

The KSHSAA has considered how to incorporate a sports season if schools apply a hybrid learning model, in which students would take some classes in-person and some classes online.

Much of the plan is already in place, as the organization could apply a rule that allows students to participate in sports as long as they are enrolled at the school and take one or more classes at the physical school. However, a full-time virtual learning plan would spell doom for a school’s sports season.

“If you’re concerned about going to school because of the virus and potential contamination or exposure, why would you want to go to practice or participate in games,” Faflick said. “If you’re going to be representing your school, you’re going to be enrolled in at least one or more classes at the school.”

The KSHSAA is asking schools to be flexible with their schedules for the upcoming year due to the unknowns raised by the coronavirus.

With virus hotspots popping up throughout the state, Faflick allowed for the possibility that some schools could adjust their schedules to avoid areas with a high concentration of the virus.

“We’ll have to exercise agility with those schedules and there may be some situations where games cannot be played because team’s can’t be put together,” Faflick said. “They have too many kids that are out. Or they choose not to play a game. We need to come to a final decision on some of that information, because that will impact scheduling.”

The organization has also looked into the possibility of having football players wear splash guards on their helmets to prevent other players from coming into contact with water droplets from their breath.

The guard, designed by football equipment manufacturer Schutt, has been approved by the National Federation of State High School Associations, though no significant testing has been done to see if it would work. One guard costs roughly $15 and is applied to a player’s face mask to cover the player’s eyes and mouth.

Each guard is made out of a clear material that feels similar to a car sticker. However, the durability of the shield is also unknown.

“It may not last a practice, it may not last a game. No one really knows,” KSHSAA assistant executive director Mark Lentz said. “Kids accidentally grab face masks, and it would only take one of those to rip right through that.”

Faflick says the organization will provide considerations for schools as they make plans for their sports seasons. The KSHSAA will control fan attendance during the post season.

“Right now, the guidance would be, ‘What does your local county health department allow,’” Faflick said. “’Do they allow 25% capacity, 50% capacity, capacity so there is still social distancing in place? That becomes one where details will develop as we move forward and they will be unique to that geographically approximate area.”

On Tuesday, Michigan Gov. Gretchen Whitmer called on the Michigan High School Athletic Association to consider moving fall sports with high contact rates, like football and volleyball, to the spring while bringing spring sports with low contact rates, like tennis and golf, to the fall. The MHSAA had been considering such a move prior to the governor’s call, according to the Detroit News.

Faflick noted that while the KSHSAA has considered having sports switch seasons, actually doing so opens the door to unintended consequences.

“Our spring athletes already lost a full season,” Faflick said. “Those kids didn’t have the opportunity to participate at all this past spring. If our baseball kids, if our track kids, if our softball players, girl’s soccer kids, music folks don’t get the opportunity to be part of a competitive or performance based season again because fall is at higher risk to be compromised than spring, that would be very damaging.”

Faflick also allowed for the possibility of shifting entire sports seasons, should the fall season need to be canceled.

“What would happen if we lost the fall season,” Faflick said. “Can we still accommodate and provide opportunities for kids to participate in all activities? When you look at that, you look at length of seasons and competitions being shortened.”

The KSHSAA is expecting more guidance from the Kansas Department of Education July 17 on what school could look like in terms of what kind of instruction models as well as how schools could operate. At that point, the organization will use the guidance to fine tune its plan for the fall sports season before sending it to schools.

The Kansas Department of Education included multiple recommendations for changes to the high school sports season, including possible limits o…