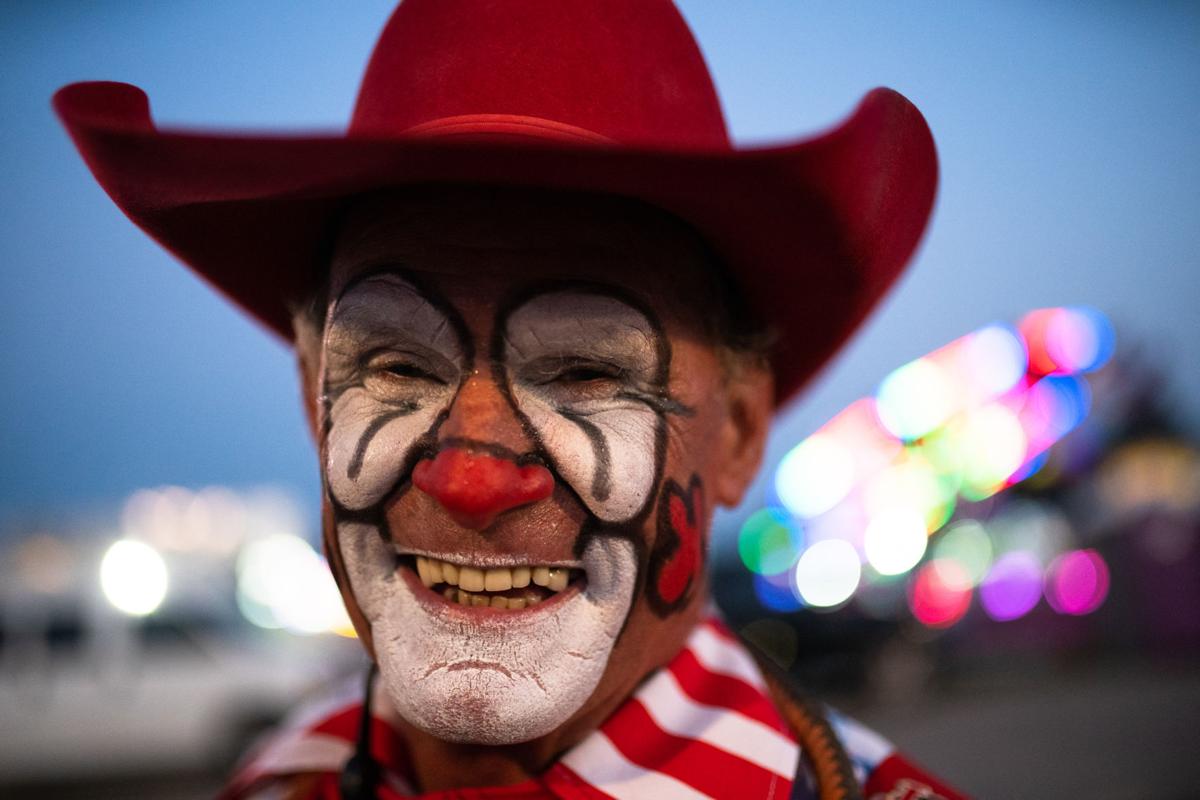 Rodeo entertainer Keith Isley smiles at Wells Arena before a skit at the Kaw Valley Rodeo Thursday night. Isley has been a rodeo performer for 47 years. 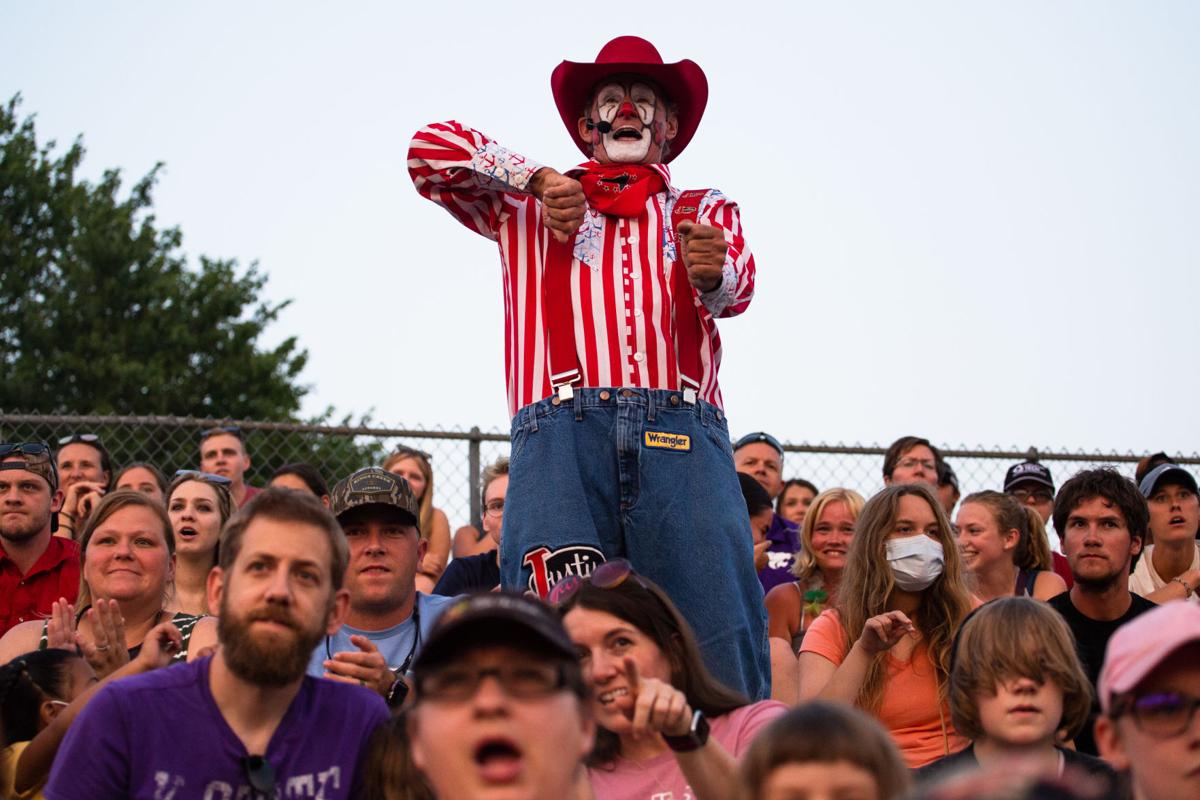 Rodeo entertainer Keith Isley speaks from the audience in Wells Arena during an event Thursday night at the Kaw Valley rodeo. 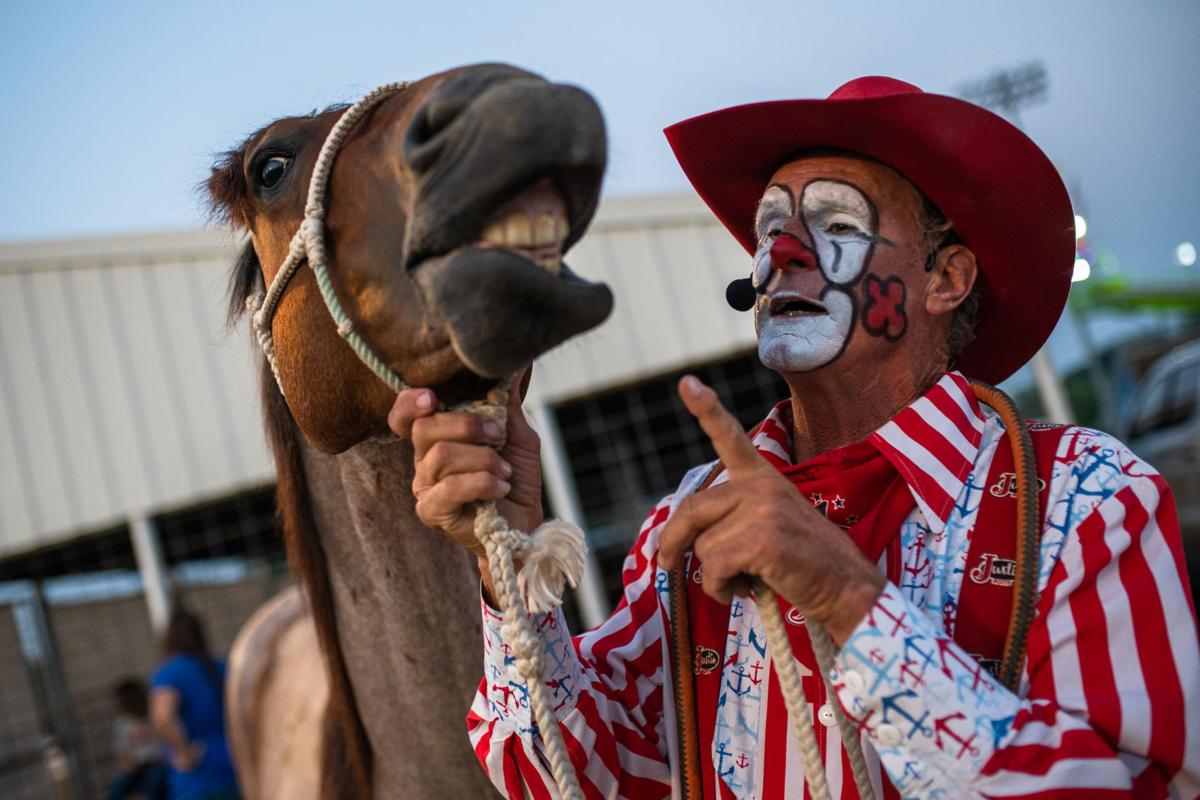 Isley talks to a horse at Wells Arena before a skit Thursday.

Rodeo entertainer Keith Isley smiles at Wells Arena before a skit at the Kaw Valley Rodeo Thursday night. Isley has been a rodeo performer for 47 years.

Rodeo entertainer Keith Isley speaks from the audience in Wells Arena during an event Thursday night at the Kaw Valley rodeo.

Isley talks to a horse at Wells Arena before a skit Thursday.

Keith Isley sits outside his trailer surrounded by three empty lawn chairs. He’s not expecting company, save for his three horses — Badger, the palomino, Otis, the Beige Roll and his miniature horse, Pumkin — whom he reckons spend more time with him than his wife, Melanie.

Case in point: The couple celebrated their 33rd anniversary, which was Friday, with a phone call. Keith called from the Riley County Fair, where he provided entertainment as the clown at the Kaw Valley Rodeo. Melanie answered from their home in Goldston, North Carolina, located 1,150 miles away. Almost 1,200 if you don’t like tolls.

“If I buy her something, she’ll think I’m cheatin’ on her,” Keith joked in his central Carolinian twang.

The couple used to drive to and perform at each rodeo together. Keith met Melanie, a former trick rider, at a rodeo in 1984. They married four years later, but in ‘91, Melanie sold her horse and traded the nomad life for peace and quiet in the country. She tends chickens, quails and “God only knows what else she’s bought since I left,” Keith said. He pulled out of the driveway at the beginning of June.

Since then, Keith has performed in Arkansas, Texas, Colorado, and Manhattan, a rare new venue for the 47-year veteran and six-time Professional Rodeo Cowboys Association Clown of the Year (he has the silver and gold “Clown of the Year” belt buckle to prove his status). He planned to drive home from Colorado until Kaw Valley’s rodeo clown realized he had double booked himself.

Unlike Melanie, who refuses to board Keith’s Freightliner for rodeo trips these days, Keith still embraces his wandering compass. So when Kaw Valley asked for his help, he pointed it toward Manhattan in the hopes that, for two hours a night, he could distract the locals from life’s troubles.

“I ain’t no Bible thumper,” Keith says. “I believe, though. And when I say a prayer, I pray that I can put a smile on people’s faces, make them forget about their problems.”

Keith Isley grew up on a tobacco farm in Goldston, 40 miles south of Greensboro, 65 miles west of Raleigh. As of 2019, the town boasted a population of 245.

The middle of three brothers, Isley grew up helping take care of the family’s horses, ponies and mules. On Fridays, he remembered, the brothers would saddle the ponies. On Sundays, they’d take the saddles off and prepare for school.

“Then we’d come back the next weekend and do it again,” Isley said.

Isley’s older brother, Tim, introduced him and younger brother Randy to the rodeo after Tim discovered it while stationed in South Carolina with the military. At 15, Keith met John Gilstrap, a local rodeo organizer who participated in a lot of his own events. Keith started out helping contestants escape dangerous encounters with animals in the ring. And shortly thereafter, he performed his first clown act.

Gilstrap had dislocated his shoulder throwing rope. Nowadays, Keith said, the medical staff, would pop Gilstraps’s shoulder into place on site. But in 1973, Gilstrap went to the hospital, leaving Keith to fill his place. Keith grabbed a bottle and a stick with a peg on it from Gilstrap’s trailer and used the stick to balance the bottle. He dropped the bottle a few times, but the audience applauded, anyway.

“Forty-some years ago,” he said, “but I still have a clear memory of it.”

Keith’s full-time transition took time, however. He started traveling for work in the late 70s, but as a bullfighter. “I didn’t want to talk in front of people that I didn’t know,” he said. Instead, he tangled with 1,400-pound bovines that chased him around the ring.

He saw a contestant die after a bull stepped on their head. He lost seven of his top-row teeth (he’s not afraid to pull his dentures out and show you). And he was cocky. One time, he cut a bull’s flank off before fighting it, which made the bull faster.

“I told myself that there was never anything that came out of a cow that could get to me,” Keith said. “I honestly believed that. I was not scared of nothing.”

That is, until Keith fought a particularly aggressive bull in Nashville, Tenn. The bull hit the dummy hard, then it knocked the barrel out of Keith’s partner’s hand.

Keith distracted the bull to help his partner get away, but he tripped as he turned to reach for the fence, he tripped. He fell with his arms sprawled out, and as his body descended toward the ground, “All I could picture was that bull putting the horn on each side of my body,” he said.

“I was scared,” Keith continued. “And I always knew that, if you ever get scared, you need to quit.”

Keith decided to do just that. By ‘89, Keith toured the rodeo circuit exclusively as a clown, barrel man and trick rider/roper (Melanie taught him how to ride in style). His act earned him work across the country and beyond. Canada, Puerto Rico, and Keith still regrets turning down multiple offers to work in Australia. His trick riding act was so unique that other contestants stopped to watch him.

“When you can entertain contestants who have seen everything everywhere,” Keith said, “you’ve got something.”

In 1999, Keith earned his first awards nominations for Comedy Act of the Year and the “Man in the Can” Award. He remembers his stomach turning at the awards ceremony in Las Vegas, his body inching closer to the edge of his chair as the nominees were rattled off.

“And Comedy Act of the Year goes to …” someone else.

“And the Man in the Can Award goes to …” someone else.

Keith’s stomach settled. He sat back in his chair. Just wasn’t his night, he thought.

“And the Specialty Act of the Year goes to … Keith Isley!”

Keith was stunned. He didn’t even know he’d been nominated.

“It was the farthest thing from my mind,” he said. “I got up there and I was shaking so bad I couldn’t even hold the stuff that they gave me.”

Twenty-two years after his first award, Keith has won 16 more. Six “Clown of the Year” awards, six “Man in the Can” wins and four “Comedy Act of the Year” honors. His goal with each show: perform well enough that they’ll ask him back.

At 7:44 p.m. Friday, Isley emerges from his trailer in full garb. He’s exchanged his plaid button-down for a baggy stars-and-stripes shirt accentuated by red-strapped Wrangler overalls. He’s left his hay-colored cowboy hat inside the trailer and donned a red one. And his face is covered from chin to cheekbones in white makeup, with dabs of red on his nose and temple. He’s applied baking powder, too, to ensure the wet Kansas heat will not ruin his paint job. “Even though they say (baking powder) gives you cancer,” he said.

Sixteen minutes later, the show begins. Between events, Keith keeps the crowd entertained with an act that features lots of improvisation. “Somebody’s parents drank wine in high school,” he quips when a younger contestant false starts before the calf scramble. The bull that won’t leave the ring is just like congresswoman Nancy Pelosi, according to Keith. “Once you get her in, you can’t get her out.”

The biggest crowd reaction comes during Keith’s dance-off with a young girl who “just so happens” to be an accomplished gymnast. Keith picked her out ahead of time, and she backflips him into submission.

“You can only do that one once,” Keith says.

After the show, Keith leads a family to his trailer so he can show the children his horses. He wishes he and Melanie had kids of their own. He would’ve changed his lifestyle if they did. But they couldn’t.

Keith will settle down, eventually. He doesn’t want to end up like a friend of his, who died alone in their hotel room after a show. But at 63, he hasn’t picked a retirement date yet, either.

But when he sits on that porch, he misses the road. He misses his rodeo family, misses the new friends that he makes at every show. The Riley County concession workers sent him home with a Cool Whip tub filled with his favorite dish of theirs: apple Snickers salad (vanilla pudding, whipped cream, apples and Snickers bars).

He misses the ring when he’s home too. His ring. Nowhere else can Keith command full attention from thousands (or, in this weekend’s case, hundreds) of people.

After Saturday’s show, he loaded his chairs, his grill and the rest of his equipment into his trailer. He hooked the trailer to his Freightliner. He rose before the sun Sunday morning, loaded the horses into their carriage and hit the road. He’ll be home for a weekend. Then home will be wherever the rodeo takes him: New York, South Carolina, Florida, Montana.

If you need him, he knows where you can find him.

“I’ll be in the office,” he said, pointing to the Freightliner’s driver’s side door.