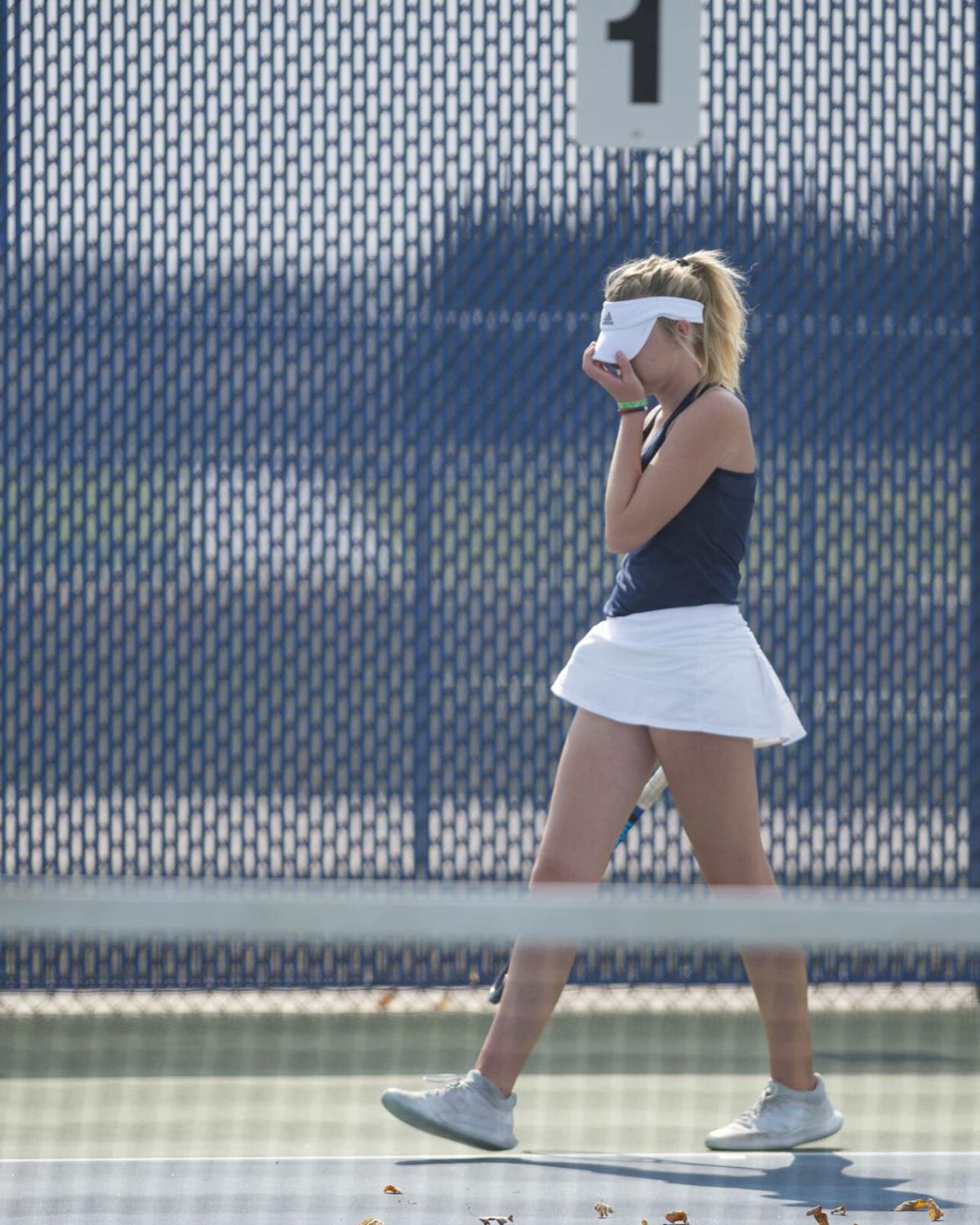 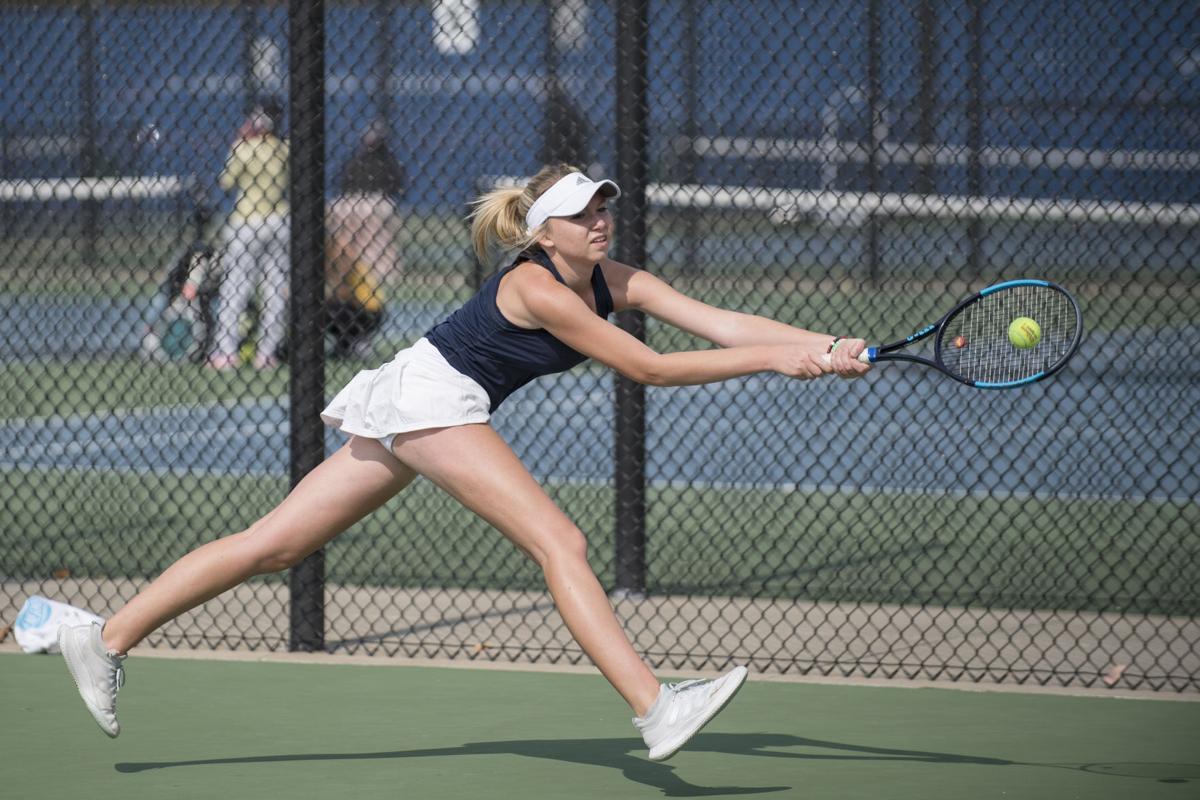 OLATHE — For the most part, Jill Harkin contained her emotions well Saturday. Despite being in pressure-packed situations throughout the final rounds of the Class 6A girls’ tennis state tournament, Harkin rarely let what she was feeling show through to the outside world.

But when Manhattan girls’ tennis coach Tony Ingram met her at the door of Court 1 at Olathe’s College Boulevard Activity Center, Harkin couldn’t hold it in any longer.

The MHS sophomore hugged her coach and cried into his shoulder. The tears flowed after she came up just short of her season’s goal: winning a state championship.

Harkin lost in the state final to Blue Valley North’s Callie Flanagan 6-0, 6-4. It was Harkin’s only loss of her sophomore season, as she finished the year 31-1.

“I just started crying,” Harkin said. “I really wanted to win. I’ve been waiting a long time, a year, for this. Now I have to wait another year for a chance for it.”

Though her record may suggest her road to the final was easy, Harkin proved she had more than just skill to reach the championship match. Her win in the semifinal over Olathe West’s Ashley Jacobson showed her heart.

When Harkin arrived at the tennis complex, the wind already was starting to pick up. By the time she started her match, a steady 25 mph wind was blowing in from the south, with recurring gusts reaching far above that number.

Though a day without wind in Kansas probably is abnormal, Saturday’s conditions presented a new challenge to Harkin. Growing up, she did most of her training indoors and thus developed a play style that is not conducive to high winds.

“I have a flat ball flight, which, when it’s really windy, doesn’t work well at all,” Harkin said. “It works well in indoor tennis, which is how I started playing, so it just brought a whole new element into the game.”

It took a Harkin a while to adjust to the conditions, as she found herself in a 5-0 hole to Jacobson. Despite winning the following two games, Harkin eventually lost the opening set 6-2.

Harkin continued to struggle with consistency into the second set, as her serve struggled to hit its mark and put her on the defensive. Eventually, Harkin found herself down 3-2 and appeared destined for another semifinal loss like the one she experienced her freshman year.

However, Harkin fought. She started moving Jacobson around the court, wearing down the Olathe West senior shot by shot. She went on to win four straight games to take the set 6-3.

By the time the two reached their final set, it appeared Jacobson was out of gas. Harkin made quick work of her, winning 6-2 to punch her ticket into the final.

However, the semifinal match’s length did drain Harkin. It was the first time this season the sophomore truly had been tested and driven to a third set.

“It took a lot out of me to come back in the semifinals,” Harkin said. “It took over two hours and I didn’t have an hour between (that match and the final). I only had around 45 minutes.”

Not only was Harkin short on rest, but she was short on experience compared to her opponent. Flanagan was heading into her fourth state championship, as she won state titles as part of Blue Valley North’s doubles teams in her freshman and sophomore seasons and finished second in the singles championship her junior season.

Flanagan also was the only player besides Harkin to enter the state tournament with an undefeated record.

The senior took the first set easily, controlling the pace of play and the entire court to win 6-0.

However, Harkin managed to make a fight of it in the second set, taking a 4-3 lead over Flanagan at one point. Harkin’s lead was short-lived. Her energy ran out and Flanagan comfortably closed out the set 6-4 to take the state title.

While the disappointment of the loss will sit with Harkin for some time, she has shown progress during her short Manhattan career. After finishing third as a freshman, she’s now finished second as a sophomore.

At the same time, the three other semifinalists of this year’s tournament were all seniors. Five of the eight quarterfinalists were seniors. With the attrition the state singles bracket is set to suffer to graduation, Harkin should be considered the favorite to win the state title heading into her junior and senior years barring any unforeseen circumstances.

“I’m going to think about this when I’m practicing and working,” Harkin said. “I’ll just use this as a motivator for me.”

Despite Harkin being the only Manhattan player to make it to the second day of the state tournament, MHS recorded a third-place finish as a team. Shawnee Mission East won the team title.

Weins and Loub managed to win their first consolation match 9-3 over Campus’ Erin Jackson and Savanna Schmidt. However, they fell 9-0 in the consolation quarterfinal to Blue Valley North’s Christine O’Brien and Emerson MacKenzie.

Bahr and Lohman also won their consolation opener over Hutchinson’s Tia Hines and Elizabeth Jackson 9-6. They were knocked out of the tournament in the consolation quarterfinals by Olathe East’s Hali Liu and Ruby Moley 9-7.

“The girls who competed (Friday) all earned a point for the team,” Ingram said. “When you get to this level, the draw has a lot to do with it. I’m proud of their effort, proud of their wins.”

Fresh faces: These 5 newcomers could impact the Arizona Wildcats in 2021

Life in the Red: After playing 'as well as anybody' in spring, Husker LB Henrich off to fast start in camp