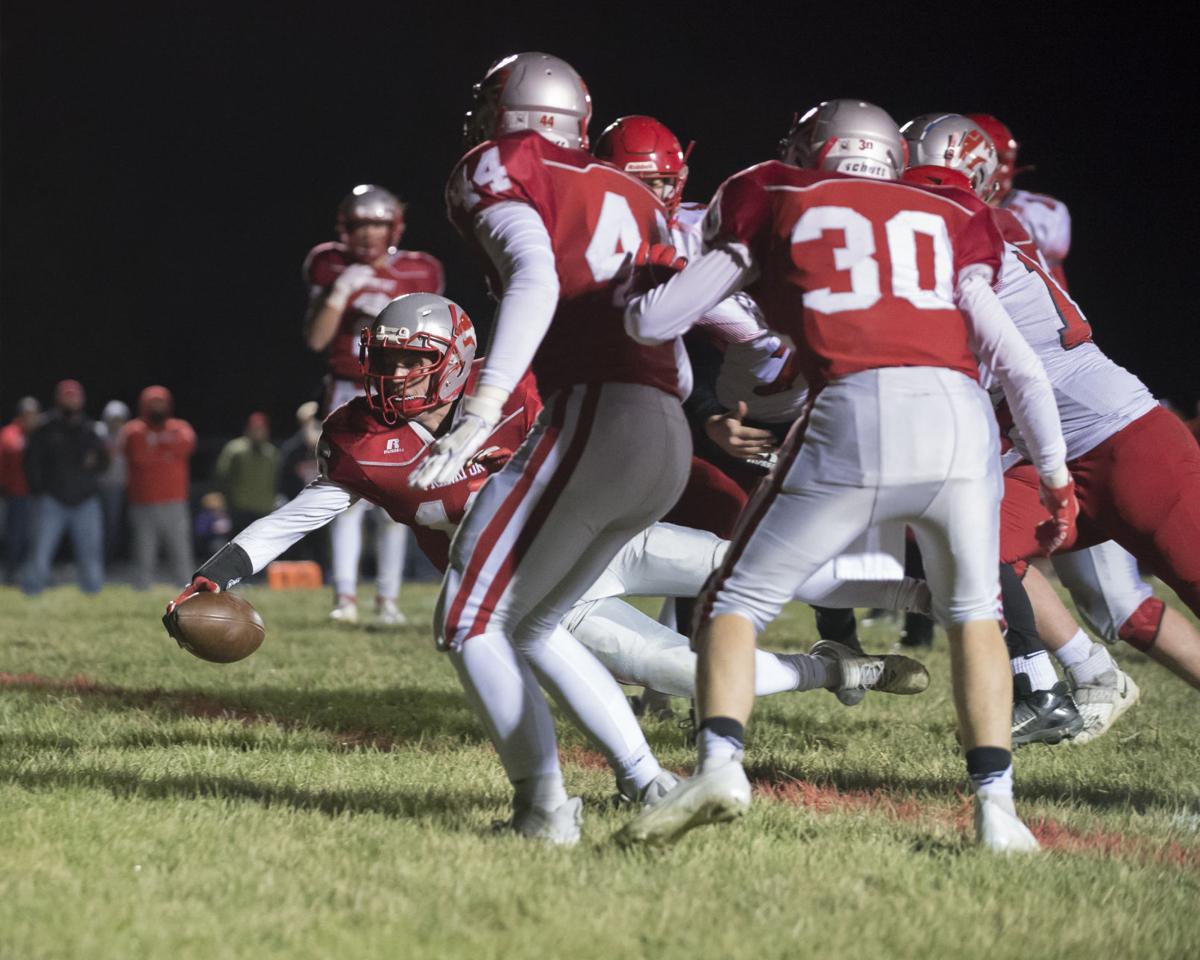 Frankfort’s Ethan Armstrong scores on a two-point conversion Friday night against Lebo. In a game that saw six lead changes and a tie, Frankfort held on for a 46-40 win. The victory gave the Wildcats a sectional championship and a spot in the Eight-Man Division II semifinals. 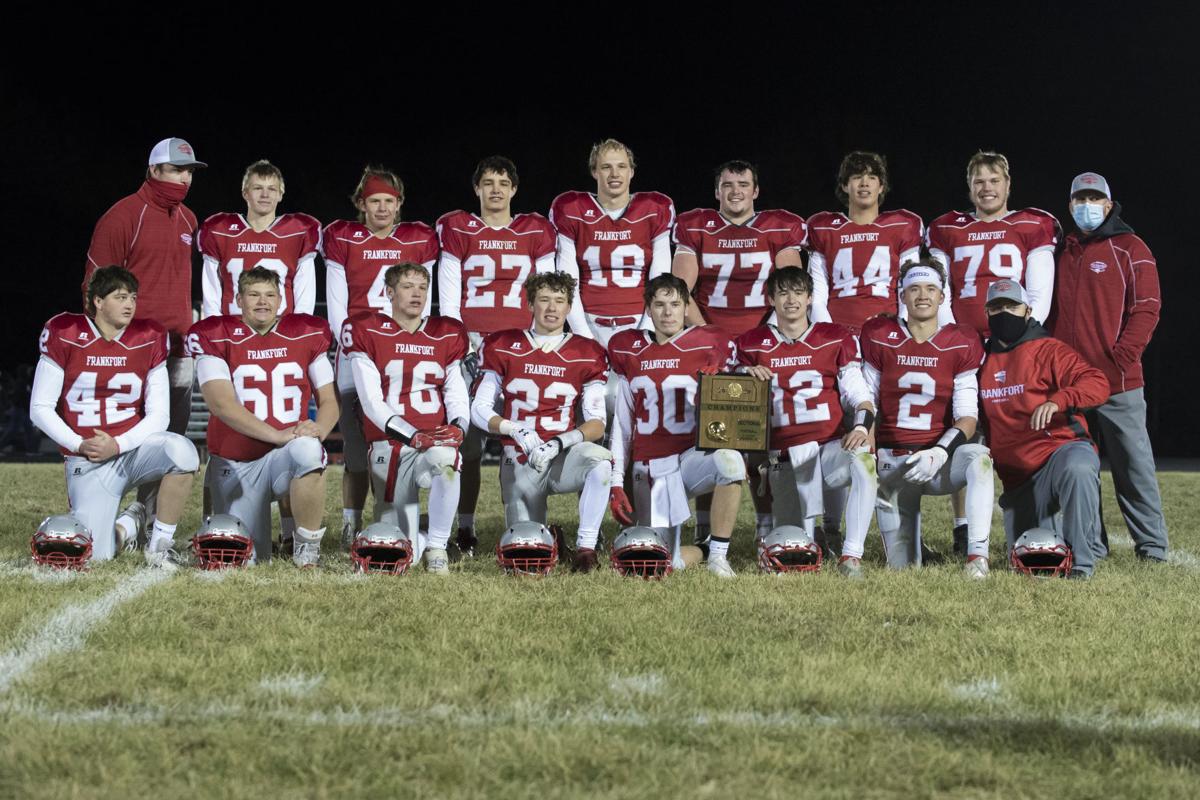 Frankfort’s Ethan Armstrong scores on a two-point conversion Friday night against Lebo. In a game that saw six lead changes and a tie, Frankfort held on for a 46-40 win. The victory gave the Wildcats a sectional championship and a spot in the Eight-Man Division II semifinals.

FRANKFORT — Devan McEwen had nary a misstep all night. He dodged, ducked, juked and spun around defenders nearly every time he had the ball. Lebo’s starting quarterback, McEwen accounted for 271 of his team’s 368 yards in Friday’s sectional matchup versus Frankfort. He also scored all six of the Wolves’ touchdowns.

But the final time the ball was in his hands, McEwen finally erred.

Trailing 46-40 with under three minutes to play and facing fourth-and-5 at Frankfort’s 14-yard line, McEwen slipped and fell.

After a pair of first-down runs, Frankfort lined up in the victory formation. Quarterback Gavin Cornelison took a knee. The Wildcats’ sideline exploded in euphoria.

Frankfort held off Lebo’s second-half rally to escape with a six-point win and capture a sectional championship.

Nick Anderson, a Frankfort alum and now the school’s head coach, injected some levity after the tense, back-and-forth contest.

“I guess our groundskeeper left the grass longer in the right spot,” said Anderson, referring to McEwen’s slip up. “But if he doesn’t fall down, who knows? He could have run it in for a touchdown. I don’t know if we caught a break or if the football gods were with us on that one. But we’ll take it regardless.”

It was a game that more than lived up to the billing.

Featuring a pair of top-five squads in Eight-Man Division II, the No. 4 Wolves and No. 5 Wildcats — per Kpreps.com’s latest rankings — swapped the lead to and fro like a hot potato. In sum, the lead changed hands eight times.

“It was a great high school football game,” Anderson said. “Couldn’t ask for a better Round of 8 game, that’s for sure.”

Frankfort (7-1) edged ahead first, with Ethan Armstrong scoring on a 7-yard run on the game’s opening possession — aided by a gutsy call from Anderson. Facing fourth-and-2 at its own 26, Anderson eschewed the punt team and kept his offense on the field.

The gamble paid off: Cornelison connected with Aiden Gerstner on a 42-yard pass. One play later, Armstrong went off the left side of the offensive line and into the end zone.

“We told them that we thought we could punch (Lebo) in the mouth a little bit,” Anderson said, “and see how they’d respond.”

And respond they did.

It just took the Wolves (10-1) some time. The Wildcats forced a three-and-out from the visitors on the Wolves’ first possession. But they gave the ball back to Lebo after a mishap on an exchange.

The Wolves capitalized, driving 48 yards in five plays, capped by a 17-yard run from McEwen. Lebo then converted for two points to take its first lead, 8-6, with 4:16 remaining in the first quarter.

Frankfort volleyed back in the second quarter, as Cornelison plunged across the goal line on fourth-and-1 at the 9:02 mark. Once again, the Wildcats came up empty on the two-point try.

McEwen pushed the Wolves back ahead on a 3-yard run with 3:11 left in the half, but this time, the Wildcats’ defense stuffed the two-point attempt, leaving the score 14-12 in Lebo’s favor.

It was a short-lived lead for Lebo, though, as Frankfort scored with 10 seconds to play before halftime: Cornelison found a wide-open Gerstner on the right side of the end zone for a 5-yard touchdown. Though the Wildcats couldn’t convert for two points for the third time in as many tries — Cornelison hit Caden Dalinghaus in the hands, but the junior couldn’t hold on to the pass — they still went into the break with a four-point (18-14) advantage.

Both teams’ offenses came out of halftime in a groove.

Lebo and Frankfort each scored three touchdowns. But the last two by the Wildcats in the quarter came on consecutive possessions, giving them some breathing room on a highlight-reel play from Cornelison.

The senior signal-caller kept the ball himself, cutting inside, fighting off multiple tackle attempts and outrunning the Lebo defense on a 23-yard rush. On the two-point conversion, he pitched it to Dalinghaus, who took it across the goal line.

Only one problem: The officials threw a flag for holding. The second attempt for two points was unsuccessful.

McEwen refused to let the Wolves go down quietly, however.

Barely a minute later, he dashed into the end zone from 21 yards out. He followed that up with a 7-yard score with 7:16 remaining.

All of a sudden, the contest was knotted at 40.

On the ensuing possession, Cornelison found Gerstner behind the Wolves’ secondary, tossing it downfield. Gerstner took care of the rest, sprinting down the middle of the field for a 61-yard score. The two-point conversion, as per usual Friday, wasn’t successful.

But the Wildcats, aided by either fortuitous greenery or the football gods (or perhaps both) on McEwen’s fourth-quarter faux pas, advanced to the semifinals.

Which, at least according to Anderson, wasn’t expected to happen.

“Most media outlets didn’t really give us much of a chance,” he said. “Lebo is an awfully good football team, and their numbers speak for themselves throughout the year. But it’s a credit to our kids.”

It also gave Anderson satisfaction that it was a team effort.

Cornelison made his share of plays with his arm and his feet. Gerstner caught passes from Cornelison and McEwen, picking off Lebo’s signal-caller in the first quarter. Toss in Armstrong’s and Dalinghaus’ efforts, and Frankfort had a quartet of playmakers.

Contrast that to the one-man wrecking ball that was McEwen.

“Him having to scramble a lot and do everything by himself is a testament to our game plan and how our kids played, because we basically took them out of everything they wanted to do — besides him running around,” Anderson said. “He’s one of the better athletes in the state, and he’s a great football player. We made just enough plays on him.”

That McEwen gained so much of his yardage off uncalled, broken plays was both a positive and negative in Anderson’s eyes.

“It’s frustrating and rewarding at the same time,” he said. “It’s frustrating because we thought we could have made more tackles in the open field that we didn’t make, but it’s rewarding to know our coverage on the back end — to chase around and cover for that long a time — was great. It was a really good job by those guys.”

The same went, Anderson said, for the entire roster. Friday’s win, hard fought as it was, left Anderson speechless.

“It’s hard to put into words,” he said. “Just so happy for this group of kids, because they’re good football players. But they’re fantastic human beings. They put in the time and the work. They’ve done everything right, so I’m just happy that they’re having the opportunity to reap some of the rewards, because it couldn’t happen to a better group of kids.”

Anderson acknowledged there was a time he thought a moment like Friday was out of the realm of possibility.

At the outset of the summer, the team couldn’t get into the weight room because of coronavirus-related restrictions. They lost a month of weight lifting. So the Wildcats made “one day at a time” their mantra this fall.

“Because you’ve got to be grateful for everything you get, whether that’s one game or 10 games,” Anderson said. “You just don’t know. It’s so crazy.”

As if the summer issues weren’t enough, Frankfort’s regular season ended early: a positive COVID-19 test within the program wiped away its final two games. In the final week of the regular season, the Wildcats had an open date. They didn’t play a game between Oct. 2 (when they beat Axtell 36-14) and Oct. 29 (when they beat Lakeside-Downs 60-14 in their playoff opener).

Overcoming all those obstacles, Anderson said, made Friday’s win all the more memorable.

“It makes this rewarding, just to think of all the trials and tribulations that we’ve gone through this year,” Anderson said, “and that they go through on a daily basis, not knowing what’s next.”

They do know what’s next — at least in a football sense.

He won’t lose sleep over it.

“Everybody has counted out the entire playoffs. They’re going to count us out again next week,” he said. “That’s fine with us. We’re going to be us and do our thing. We’ll see what happens.”