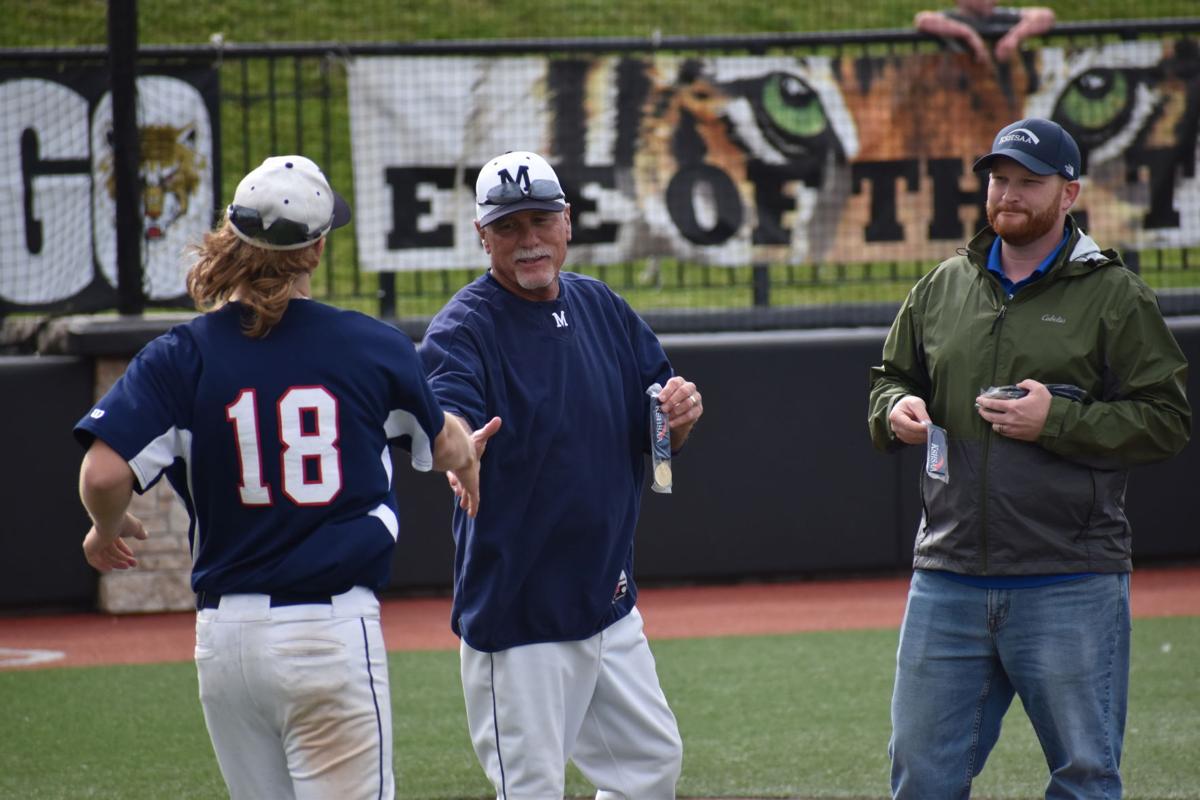 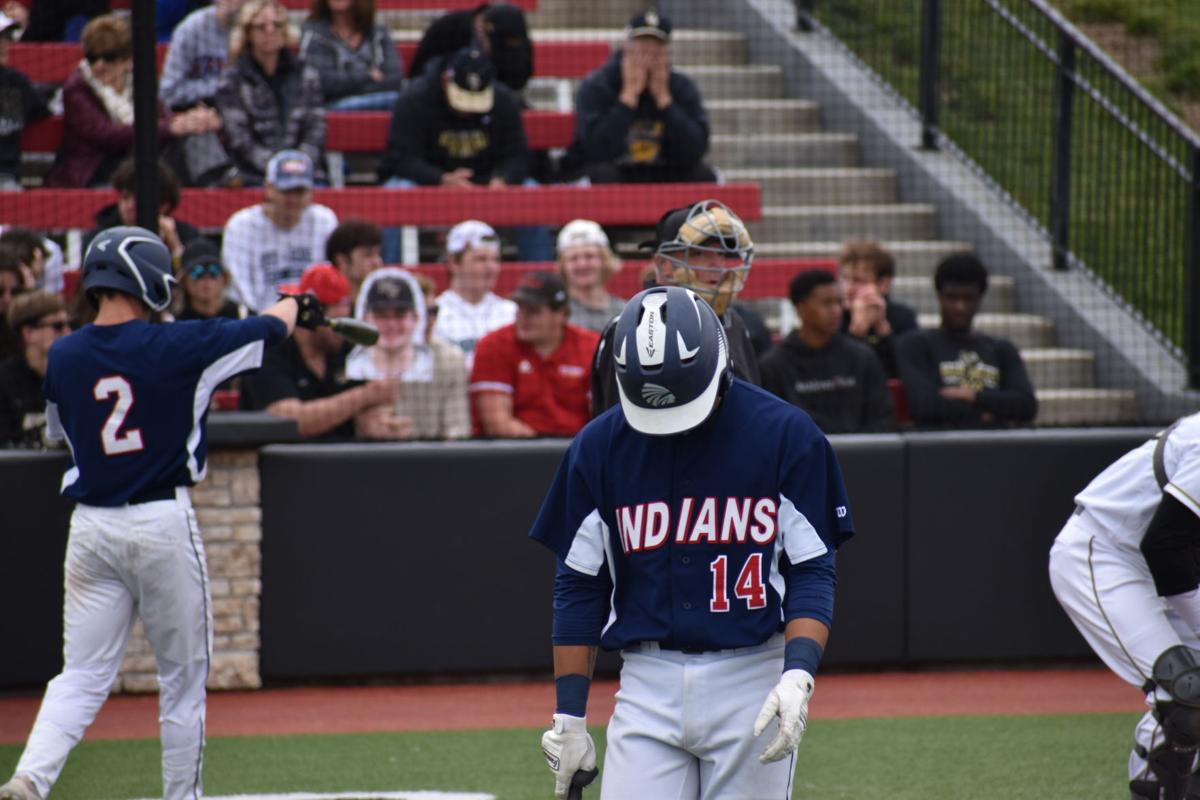 Manhattan High's Tyler Pere walks back to the dugout after striking out against Blue Valley pitcher Carson Liggett in the Class 6A semifinals Saturday in Fort Scott. 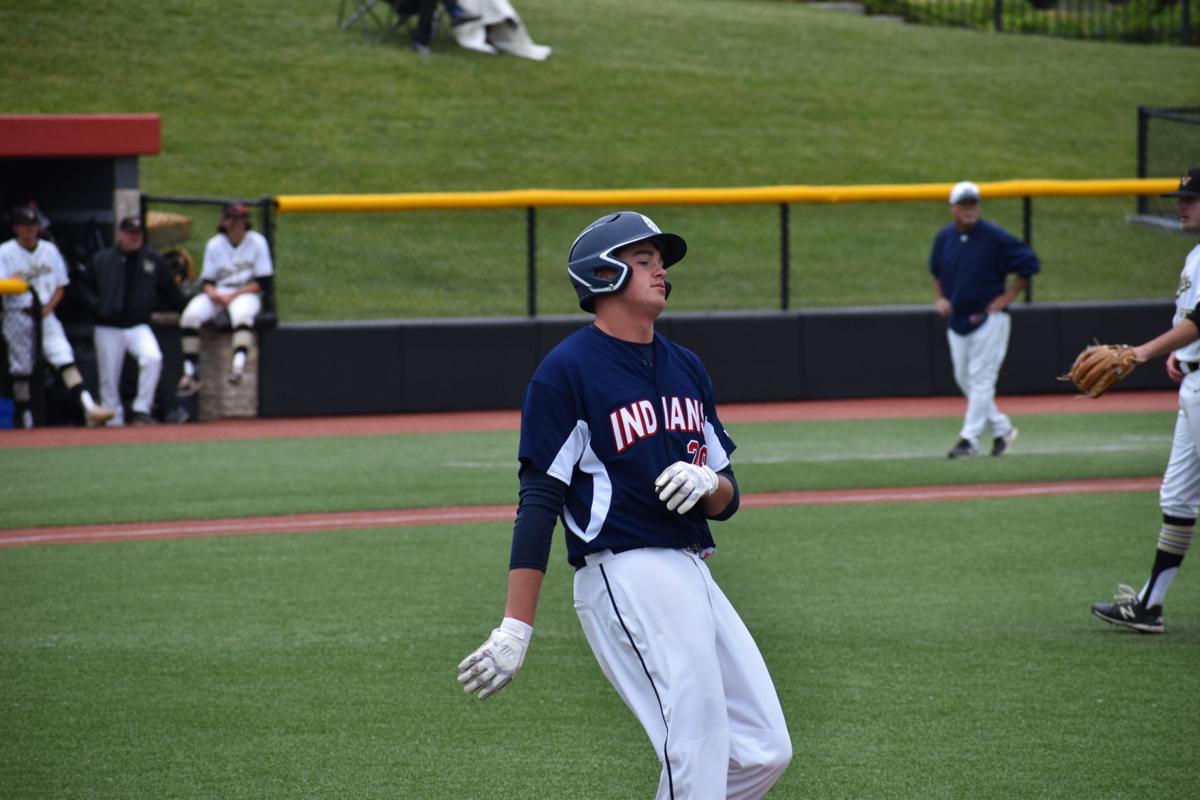 Manhattan High's Cade McIlvaine reacts after an out during Saturday's semifinal game versus top-seeded Blue Valley. 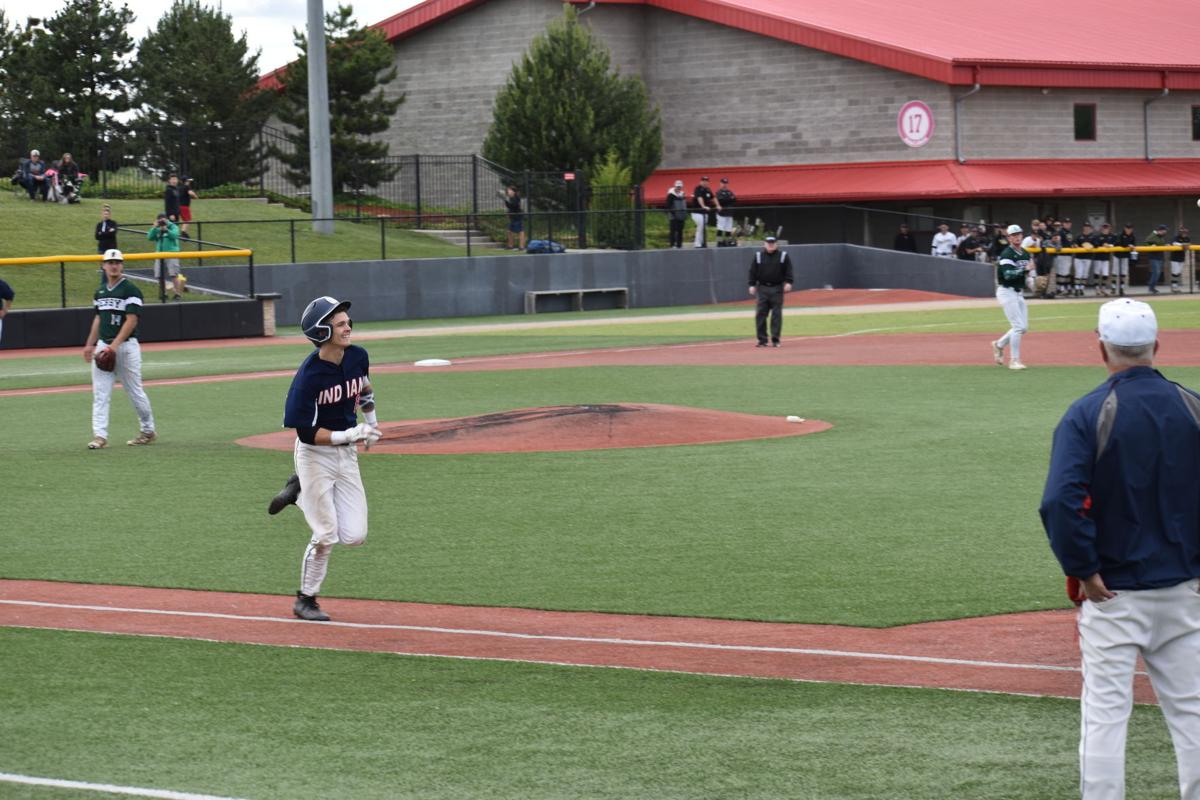 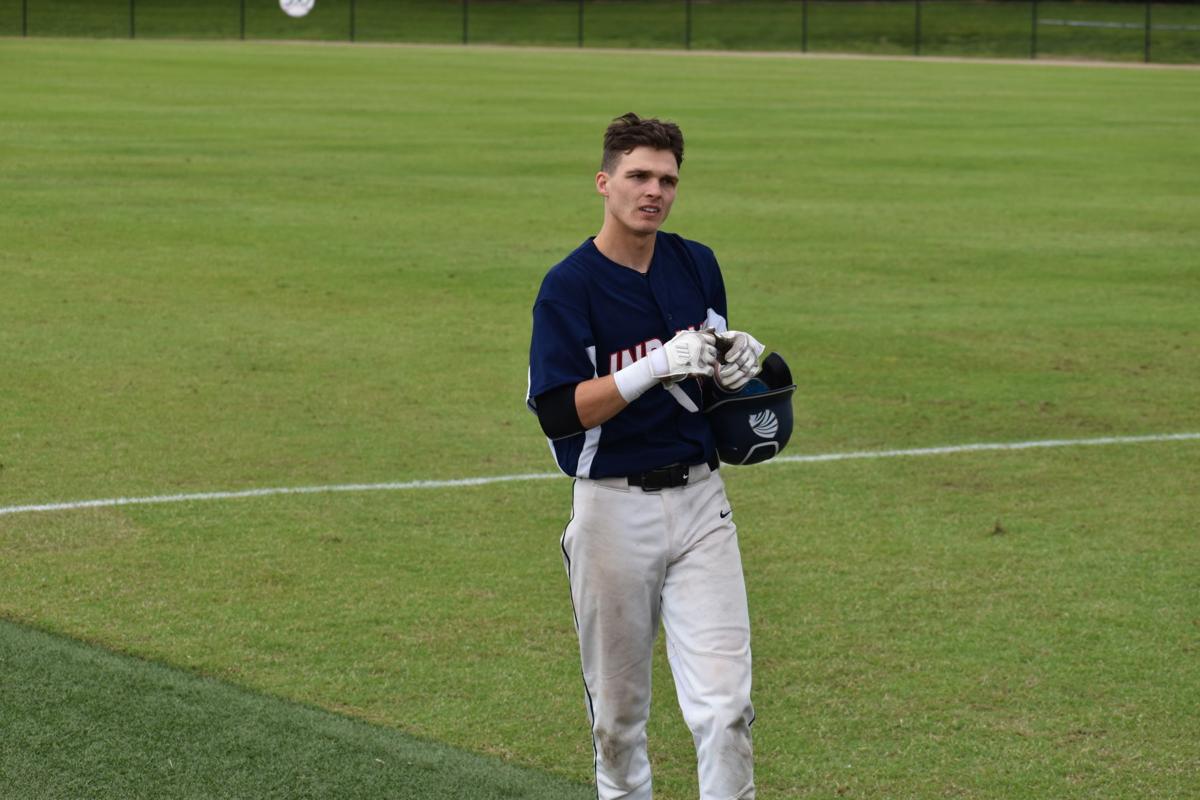 Manhattan High’s Marccus Wallace heads back toward the dugout after a putout at first base during the third-place game against Derby in Fort Scott. 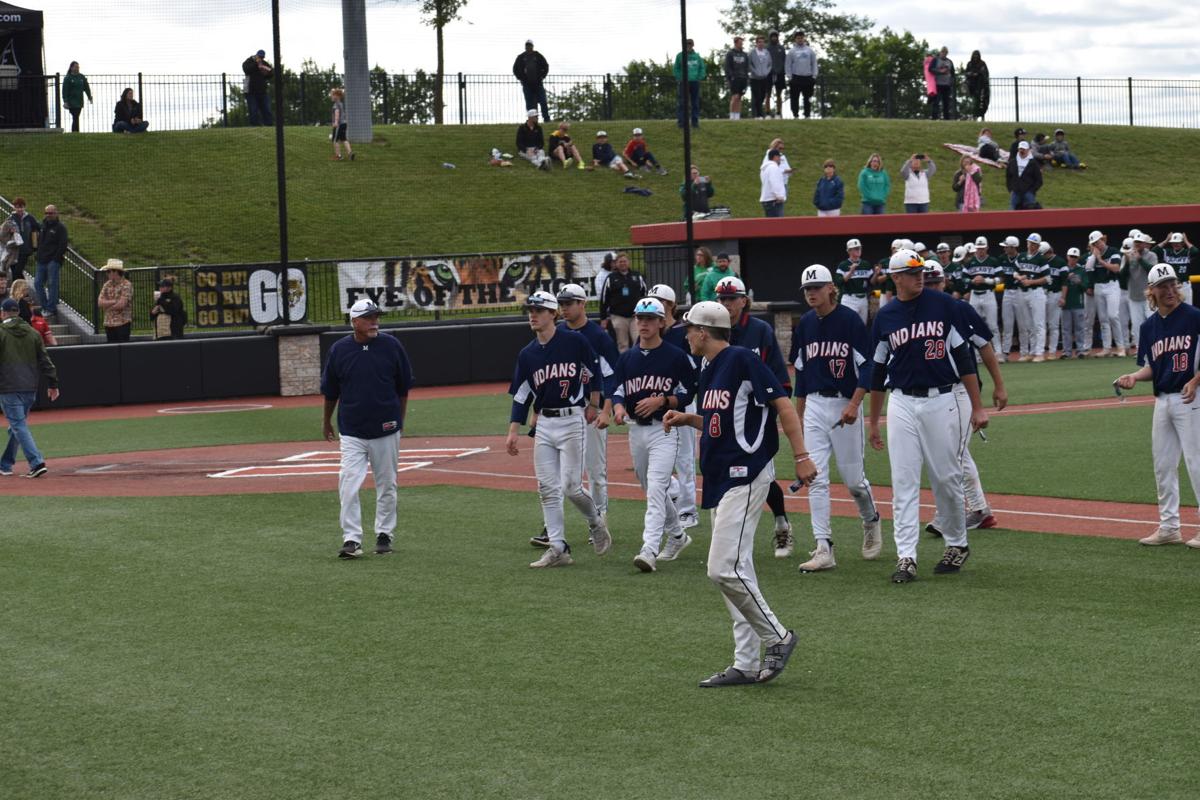 Manhattan High players walk off the field after receiving their fourth-place medals at the Class 6A tournament in Fort Scott on Saturday.

Manhattan High's Tyler Pere walks back to the dugout after striking out against Blue Valley pitcher Carson Liggett in the Class 6A semifinals Saturday in Fort Scott.

Manhattan High's Cade McIlvaine reacts after an out during Saturday's semifinal game versus top-seeded Blue Valley.

Manhattan High’s Marccus Wallace heads back toward the dugout after a putout at first base during the third-place game against Derby in Fort Scott.

Manhattan High players walk off the field after receiving their fourth-place medals at the Class 6A tournament in Fort Scott on Saturday.

FORT SCOTT — As one downcast player after another walked from the dugout toward home plate, Don Hess offered a handshake. A smile. And with a few sullen players, a laugh or two to brighten their mood.

Those were among the only positive vibes Manhattan High’s players had on the diamond Saturday at Dave Regan Field. The Indians started the day hoping to secure their third baseball state title in school history, joining championships captured in 1992 and 1998. They ended the day with a pair of losses by a combined score of 24-2.

So as players approached Hess to receive their fourth-place medals following the 9-2 loss to Derby in the third-place game, Manhattan High’s longtime head coach said the smiles and lighthearted words were reminders that one day does not a season make.

“When you reach this point, you just have to remember all the great times you had and the great success we had throughout the year,” he said. “Finishing fourth in the state, 19-6 (overall)? That’s a great year, a great year.”

The problem for MHS, Hess noted, was that his team picked the worst possible time to have its worst day of the season.

“We didn’t have a very good day in any facet of the game,” he said, “and it kind of snowballed on us.”

In the second game, Derby (20-5) scored nine runs in the first five innings — all before Manhattan got on the board. The Indians rallied with a run apiece in the sixth and seventh frames. At that point in an already rough day, the result was an afterthought; Hess’ focus was on emptying the dugout.

For proof, Hess pointed to the words of an umpire, who said Manhattan’s victory over Olathe West — a 5-3 affair on Friday that clinched the Indians’ spot in the final four the next day — “was the best game he’s ever worked.”

Derby chased Manhattan starting pitcher Tyler Gagnon after 2 1/3 innings, in which he gave up seven runs (six earned) on four hits. Senior Dayne Aschenbrenner came on in relief and tossed 1 1/3 inning, with two runs (both earned) and two hits. Fellow senior Jaden Moon was next on the mound, tossing 1 1/3 scoreless innings. Tylar Pere closed out with a perfect frame in the bottom of the sixth: no runs on no hits.

One thing that didn’t help the Indians’ hurlers: the fielders were throwing it around the yard.

As frustrating as the defeat to Derby may have been for MHS, nothing could compare to its earlier setback Saturday: a 15-0 loss, in three innings, to the eventual state champion, Blue Valley.

The Tigers (23-2) put a run on the board in the first and three more in the second. But the lion’s share of their scoring came in the third frame, when they plated 11 runs — 10 coming with one out — to bring the contest to a close via the mercy rule.

Manhattan didn’t notch a hit in the loss.

But it all starts, Hess said, with pitcher Carson Liggett.

“He was good,” Hess said of the Louisville commit, who recorded six strikeouts and issued no walks in his three innings of work, in an outing in which he faced the minimum of batters (nine) possible. “They come at you from a lot of different angles. They’re definitely real solid — just the number of commits they have going to play Division I baseball will tell you that. But they play hard. They’re big, strong, physical kids. They definitely earned it.”

Just as they would later in the day, the Indians committed four errors against the Tigers — which might as well have been a death sentence against Liggett.

“Their pitcher is really out of this world,” Hess said. “When you fall behind by two, three, four runs against a guy like that, it makes it very difficult to keep grinding away. We just didn’t pitch, catch or swing it real well today.”

As it was, Hess preferred to focus less on the present of Saturday’s two losses and more on the past (the six-man senior class suiting up for the final time) and the future (what this season means going forward).

“It’s never a good time for seniors to go. Those six guys have given us everything they have,” said Hess, alluding to Aschenbrenner, Moon, Reece Fairchild, Mason Henry, Marccus Wallace and Brett Wilcoxson. “They got us back to the state tournament and into the semis. If I was a senior, I’d feel like I’ve left behind a nice legacy. We’re real proud of all six of them. We hope they had a good time.”

Hess also believes this season, and the team’s run to the final four, will pay dividends in the years to come. Take a gander at the makeup of his roster, he said: six seniors, six juniors, six sophomores.

“So we’re really young,” he said. “Hopefully the experience they gained, for the players coming back, I hope they learned something about what it takes to compete at this level and also succeed at this level.”

The same goes for Hess’ feelings for this team — a group he’ll never forget.

“All of our guys love to represent Manhattan High,” he said. “We’re sorry it didn’t turn out the way we had hoped, but we feel like we had a great year anyway.”