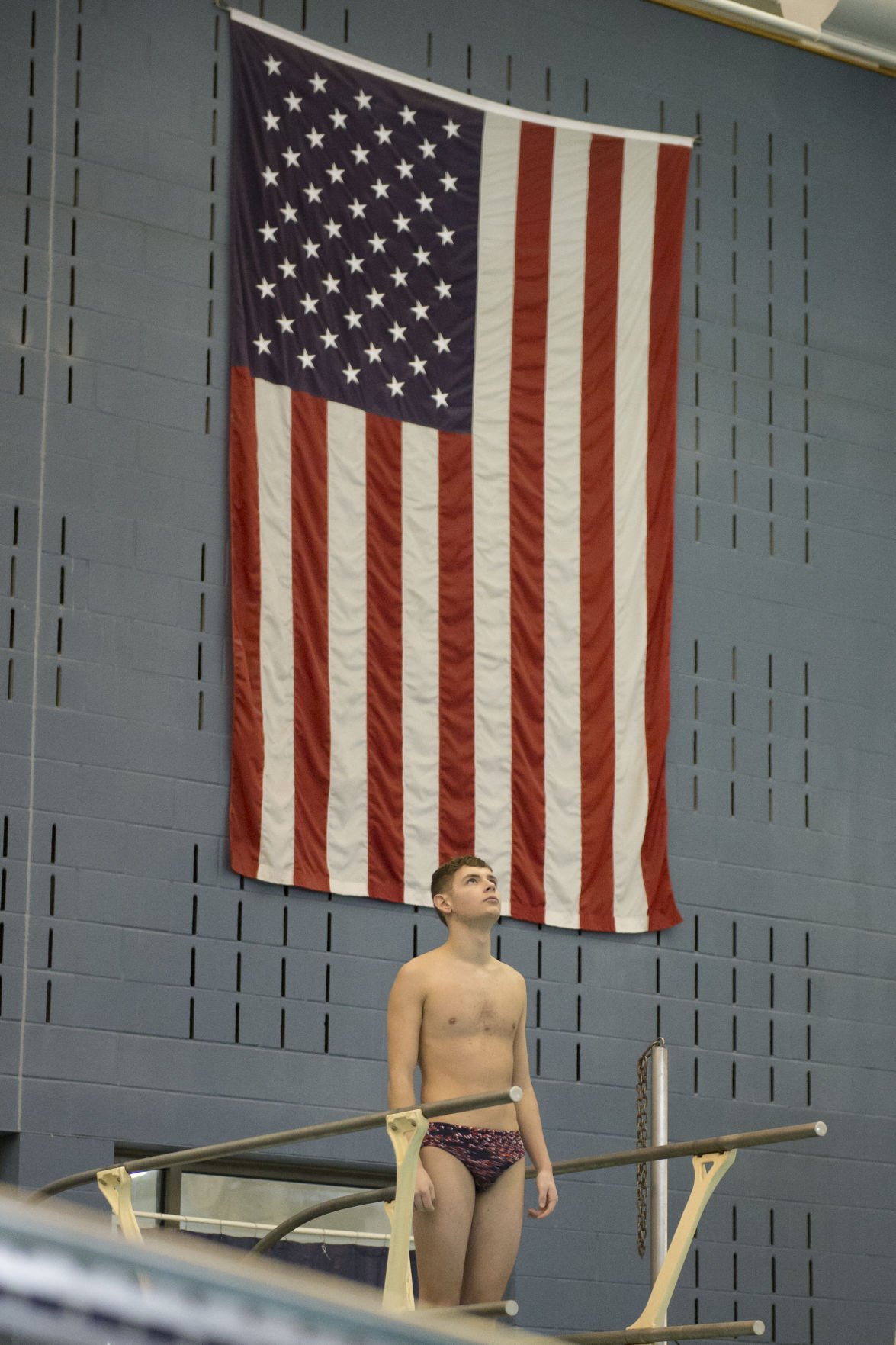 Zeke Kohl prepares to dive at the 2020 6A boys state swimming and diving championship at Hummer Sports Complex. Kohl finished sixth at the meet, a mark he believes he can best if the Indians can find a new aquatic facility. 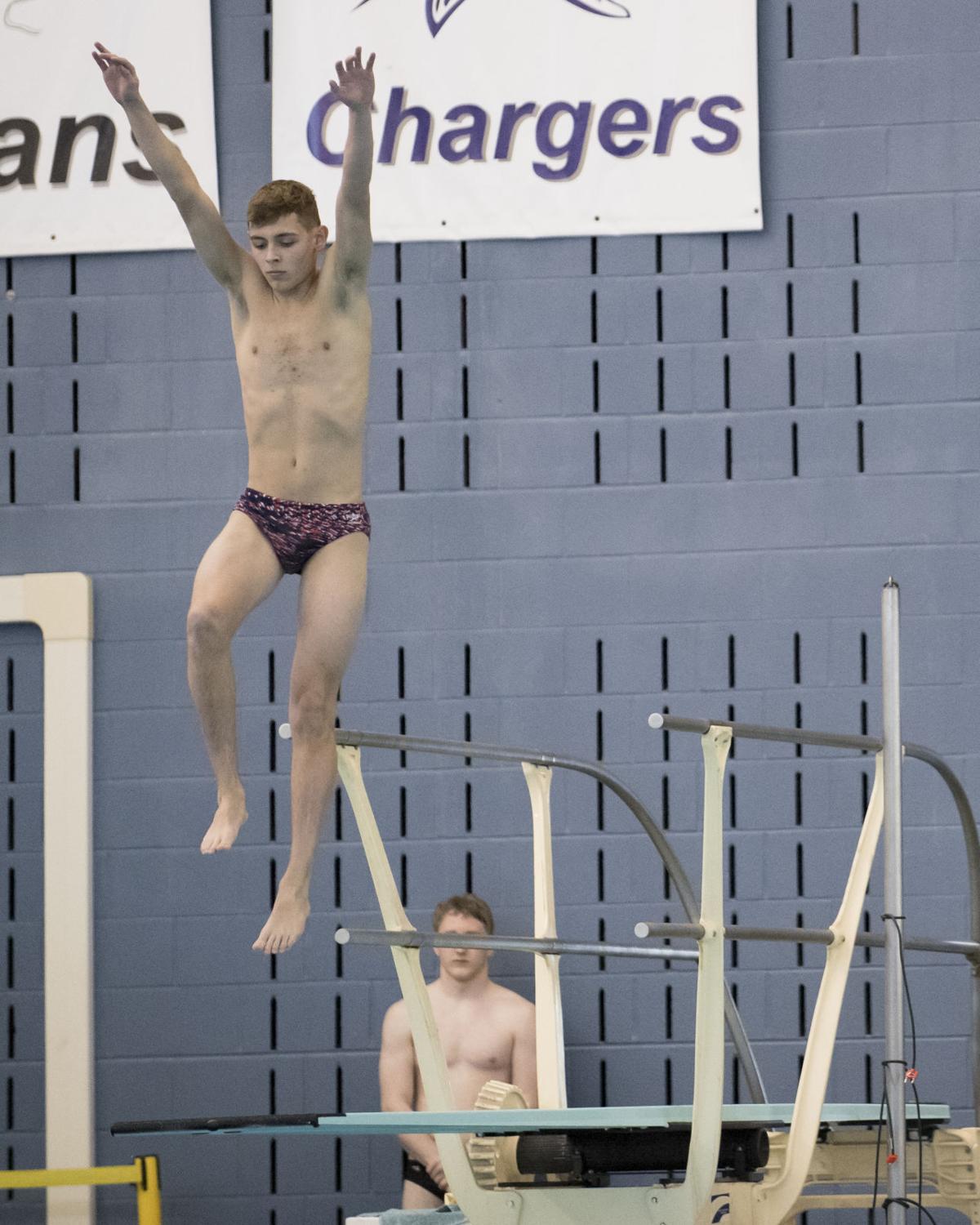 Manhattan’s Zeke Kohl begins a dive during the 2020 6A boys state swimming and diving championships at Hummer Sports Complex. Kohl finished sixth at the event.

Zeke Kohl prepares to dive at the 2020 6A boys state swimming and diving championship at Hummer Sports Complex. Kohl finished sixth at the meet, a mark he believes he can best if the Indians can find a new aquatic facility.

Manhattan’s Zeke Kohl begins a dive during the 2020 6A boys state swimming and diving championships at Hummer Sports Complex. Kohl finished sixth at the event.

Manhattan junior Zeke Kohl paced to the edge of the 1-meter diving board at Shawnee Mission School District Aquatic Center and faced the ladder behind him. He pushed off the board with his feet, pulled his knees to his chest and, like he’d always been taught, stared at a spot on the opposite side of the pool.

Splash. Kohl plunged into the 16-foot-deep pool confident he’d stamped his spot in the semifinals. He emerged from the water to enthusiastic applause.

It wasn’t until Kohl exited the pool that he realized he made a mistake during his fifth and final preliminary dive at the 2021 state meet. When Kohl glanced at the jumbotron, the screen flashed nothing but zeroes

“It was a really pretty dive,” Kohl said. “It went really well. It was just the wrong dive.”

Kohl blames the Indians’ lack of a practice facility for his 26th-place finish at state. In a normal year, he’d have practiced his dive all season, most intensively during the three weeks leading up to state. “No way,” he says, would he have thrown a back one and a half tuck instead of a back one and a half twist.

When Kansas State closed its natatorium (first because of the coronavirus, then permanently in February), however, it left Kohl without a practice pool. The pool at Fort Riley was closed during the pandemic, and the water at the Indians’ interim swim facility in Wamego was only five feet deep. Kohl’s only practice came during the hour-long warmups before the six meets he competed in during the regular season.

Manhattan’s facility failure cost most of Kohl’s teammates a year of competition. Senior Rylie Vardiman is missing her chance to be the girls’ dive captain this spring. Manhattan’s Al Days, the dive coach of 32 years, retired as a coach without a pool. Kohl continued competing, but he wasn’t prepared for one of the few opportunities he’ll have to improve upon his sixth-place finish at the 2020 state meet.

“I really wish that I had the practice and the pool that we could have here in Manhattan,” Kohl said. “Instead of getting dead last at state, I could be back on the podium like I used to be.”

Kohl first stepped foot inside the natatorium as a ninth grader. His only goal: mimic his older brother, Zane.

Zane, then a senior, had finished fifth at state the year before (2016). His background in gymnastics made him a natural. Zeke said Zane arrived to every practice fearless, prepared to smack the water.

Zeke, on the other hand, had transitioned from wrestling. The rugged, grueling lessons he learned on the mat didn’t transfer to a diving board the same way Zane’s acrobatic skillset did.

At first, Zeke could only throw a one and a half forward tuck, the third dive on most sheets. “And it was really, really, ugly,” he said.

But what Zeke lacked in technique he made up for in vigor. The Kohls grew up embracing heights while swinging as high as 40 feet on the makeshift Tarzan rope they tied to the tree in their backyard. And their parents bought them a 6-by-14 competitive trampoline the year before Zeke joined the dive team.

“Not to brag,” Zeke said, “but (the Kohls) pride ourselves on not caring about the outcome of a scary situation.”

Like any good older sibling, Zane embraced Zeke’s enthusiasm by mocking his brother. “You suck,” Zane would say after Zeke bumbled a dive. “That’s crap. You can do better than that.”

The needling hurt Zeke, but it also drove him. Zane was right: Zeke could do better, as long as he could shake his fears of pain and water. And a quarter through the season, he did. He dispatched his belly-flop fears and progressed past the first page of the dive sheet.

“Zane pushed me to get there,” Zeke said. “(His words) were painful and sad, but they also encouraged me to keep going.”

The Kohl brothers’ relationship progressed on the same curve. Before diving, Zeke said, he and Zane lacked the connection he craved. Zeke wrestled; Zane dived; and they did very little together.

Thanks to the natatorium, though, the Kohls developed a common tongue. They spoke of Louganis and Steele, inwards and reverses, half twists and armstands.

“As soon as I joined the team, Zane and I kind of grew together, and we only bettered ourselves through that growth,” Zeke said. “Zane was a huge reason why I liked the sport, just because he was there helping me do all the beginning stuff, and he set a bar really, really high for me to go and reach.”

Zeke still can see Zane happy-hopping in his Speedo whenever Zeke nailed a new dive. And by the end of his freshman season, Zeke learned enough to qualify for state alongside his brother.

A baseball to the knee prevented Zeke from competing, however. He could only watch while Zane finished second. After the meet, Zeke vowed to match his brother’s benchmark.

“The whole goal was to be better than Zane by the time I leave high school,” he said. “I still have a chance.”

Vardiman never envisioned accepting one, either. She considered herself more of a doggy-paddler until this season, when the natatorium’s closing presented her with a choice: swim or say goodbye to her swimming friends.

Senior Sydney Hicks deserves the credit for recruiting Vardiman into the family. Back in 2019, the Indians needed more divers. Hicks thought Vardiman, who competed in gymnastics and competitive cheerleading (still does), would be a perfect fit.

Vardiman agreed and learned the basics soon afterward. Jump up, not out, Days taught her. If she could remember that and conquer her fears (Days says diving is 75% mental), she could do any dive.

Vardiman acclimated to the sport quickly and befriended her teammates even quicker. She found fast friends in Katy Grove and Holly Randall; the Indians lounged in hammocks, ate meals and hosted team game nights together.

“I got close with a lot of girls I definitely wouldn’t have met if I wasn’t on the dive team,” Vardiman said. “We all just pushed each other and cheered each other on.”

Manhattan planned to build upon those bonds in 2020, but their season ended after just a couple practices thanks to the coronavirus pandemic. Vardiman can’t believe it’s been two years since she practiced with Nadia and Mackenzie Kramer, who were freshmen in 2019.

That streak was scheduled to end this spring until Kansas State updated the natatorium’s webpage in August: Instead of closing for COVID, the facility was closing for good.

Vardiman heard the news from a friend on the Manhattan Marlins club team.

“I just remember being so devastated,” Vardiman said. “I knew that Manhattan didn’t have another pool. And I just didn’t know what we were going to do.”

Retirement hasn’t stopped Days from rising early in the mornings. His 100-acre property commands his attention each day.

He’s fond of the blackberries he and his wife grow in the garden, and he’s been canning tomatoes for years. Perfecting raspberries remains a challenge.

“They’re just so small,” Days said. “And kind of finicky.”

They also help him maintain a routine, which was chief among his concerns after leaving a job that kept him on a set schedule for 40 years. But between his plants and his house-flipping side hustle (his wife helps him paint the interior), he’s staying busy.

Days enjoys the extra free time, but he still thinks about his divers. He watched Zeke’s diving meets over Zoom last winter; he sympathizes with Zeke’s predicament; and he shakes his fist at the city for lacking a backup plan once the natatorium closed its doors. He misses witnessing the moments when his divers “got it.”

“The expression on their face, the boost in their confidence,” Days said. “That makes me feel good.”

He’d like to witness those moments again, venue permitting. Days said he’d “probably” return to coaching if Manhattan finds a pool that supports its diving team.

Brown says the most promising lead involves building a dome around an outdoor pool. Several parents affiliated with the Marlins pushed the idea during a meeting with city commissioners in March.

If the idea becomes reality, Brown thinks Manhattan’s dive program can return next season. Vardiman, now an honorary swim captain, will be studying architecture at Kansas State by then, but she offered a sales pitch for prospective divers, anyway.

“You should join the dive team because it’s a close-knit group,” Vardiman said. “And you have a lot of fun. And you get to miss school (for meets), which is always cool.”

Kohl has big plans for his excused absences, and he can’t fulfill them under the circumstances he endured last season. “It’s impossible” for him to match Zane’s second-place finish at state without practices or a coach.

He’d much prefer to work with Days again, though. Kohl can list several reasons why, but in his mind, he only needs one.

The drive to Topeka lasts 60 minutes round trip; his practices last 90.

“I’ll be doing more driving than I would be practicing,” Kohl said. “Yeah, I feel like that’s wrong.”