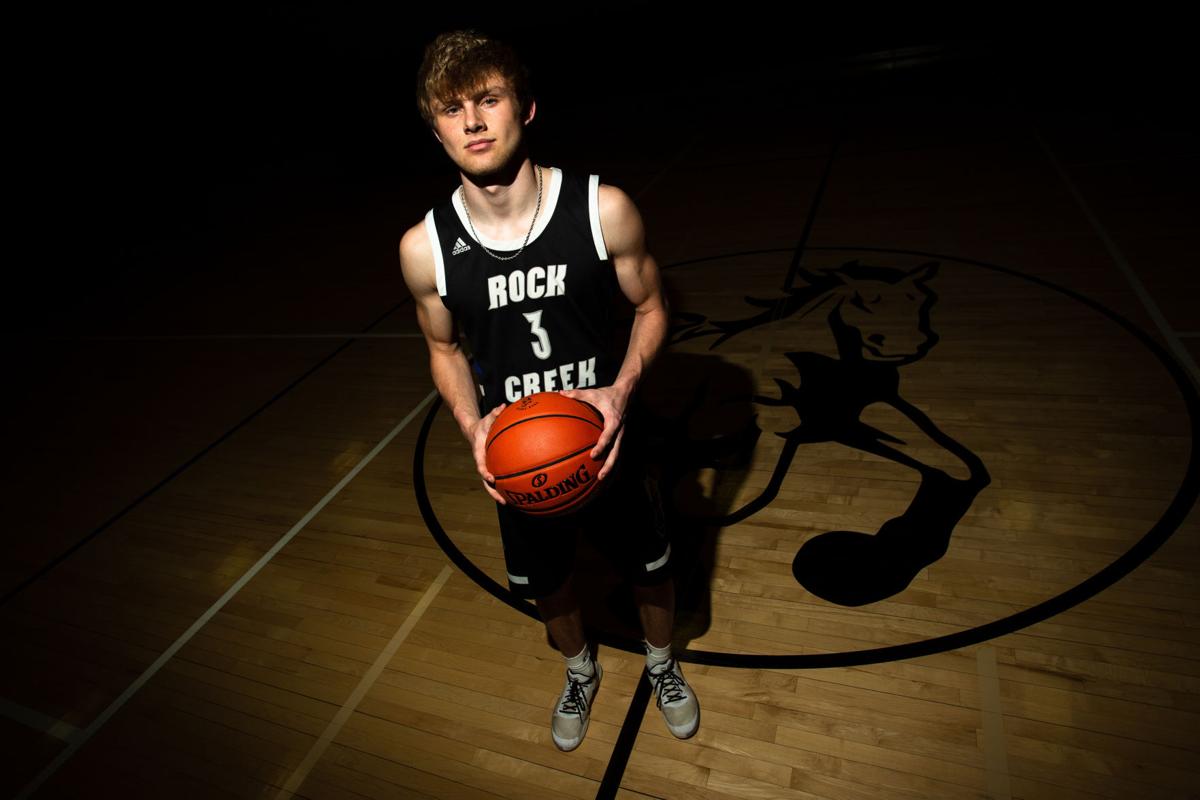 Dawson Zenger, who recently wrapped up his senior season for Rock Creek’s boys’ basketball team, led the Mustangs with more than 1,700 points during his career. Rock Creek finished third at the 3A state championship in March. The Mercury selected Zenger as the All-Flint Hills Player of the Year in boys’ basketball. 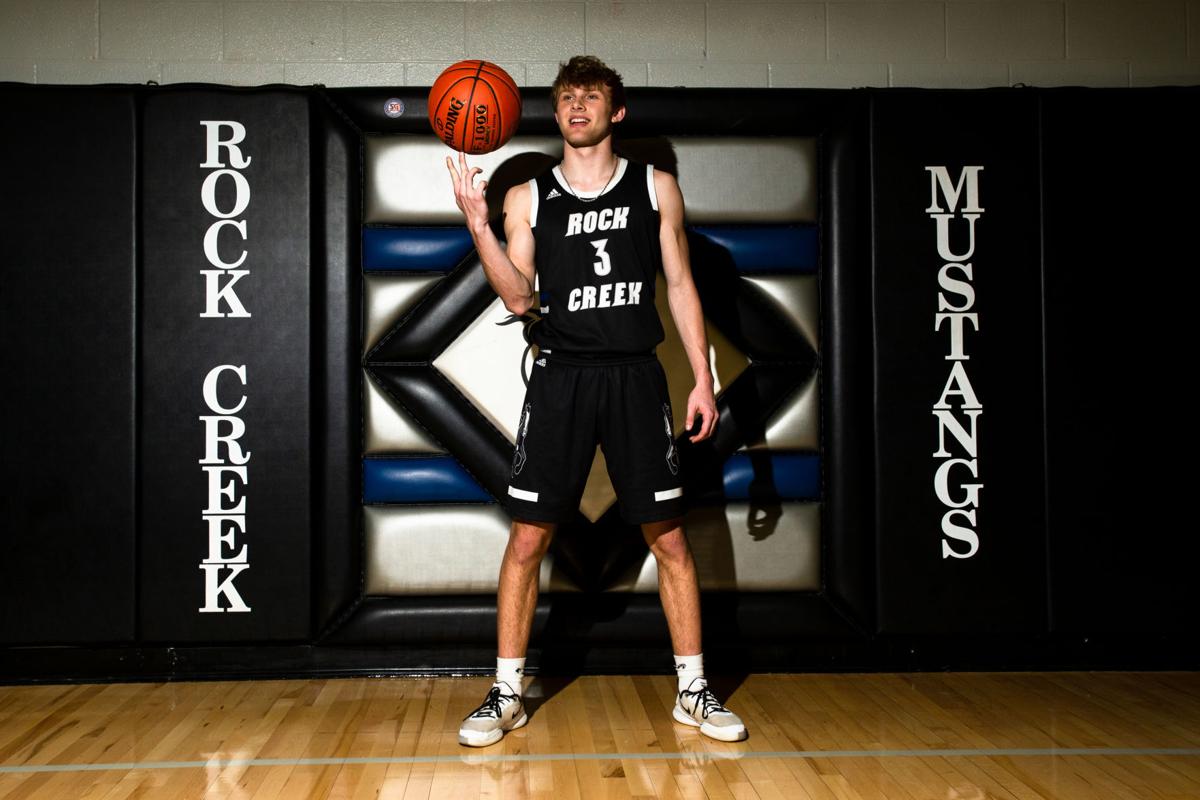 The Mercury selected Rock Creek’s Dawson Zenger as the All-Flint Hills Player of the Year in boys’ basketball for the second consecutive season. Led by Zenger, the Mustangs finished third in the Class 3A tourname last month.

Dawson Zenger, who recently wrapped up his senior season for Rock Creek’s boys’ basketball team, led the Mustangs with more than 1,700 points during his career. Rock Creek finished third at the 3A state championship in March. The Mercury selected Zenger as the All-Flint Hills Player of the Year in boys’ basketball.

The Mercury selected Rock Creek’s Dawson Zenger as the All-Flint Hills Player of the Year in boys’ basketball for the second consecutive season. Led by Zenger, the Mustangs finished third in the Class 3A tourname last month.

The bleachers were empty, Zenger’s teammates absent. His time as the centerpiece at the Mustangs’ gym expired when they lost 48-41 to Galena in the Class 3A state semifinals on March 13.

That loss hasn’t stopped Zenger from cleaning up postseason awards, however. In the two-plus weeks since, Zenger has been named first-team All-Mid-East League, all-tournament and all-state. He was second-team All-Class, which awards the top 15 players in the state regardless of class.

That’s not why Zenger posed in his uniform as the Mercury’s All-Flint Hills Player of the Year in boys’ basketball, however. No, Zenger was named a back-to-back winner because, after two years of frustrating sub-state exits, the senior guard led the Mustangs advanced to the final four of the state tournament for the first time since 2014.

And though the Mustangs fell short of a title, their tournament success offers validation no shiny trophy or gaudy statistic ever could match.

“A lot of guys average a lot of points,” Zenger said. “It doesn’t mean a thing unless you win. That’s my argument for the player of the year.”

Zenger’s bid for Player of the Year began last summer, at his house, in front of the TV screen. Zenger, like the rest of America, was captivated by ESPN’s “The Last Dance” documentary about Michael Jordan and the 1997-98 Bulls. So much so, in fact, that he re-watched the 10-hour project 10 times.

After 100 hours, Zenger started applying the Bulls’ lessons to his hometown Mustangs, who had been upset in the sub-state semifinals by St. Marys just months earlier. Zenger noticed that Jordan never won a championship until he empowered his teammates. He thought he’d employ a similar strategy.

“I saw that after losing, he needed to bring his teammates up,” Zenger said, “So I felt like I should do that, too.”

When the coronavirus canceled the Mustangs’ summer workouts, Zenger hosted teammates for 3-on-3 games on his official-sized outdoor court. In practice, he learned which players could withstand his tongue-lashings (point guard Brooks Whaly took them the best). Once the season started, the best point guard in Class 3A embraced an off-ball role.

Zenger balked when Rock Creek head coach Jim Johnston first suggested that Whaley bring the ball up back when both guards were sophomores. But Johnston needed a counter against the slew of box-and-one looks opponents threw at the Mustangs.

Zenger called it the “Stop Dawson and you’ll win” philosophy. And though he preferred to play on-ball, he understood that Rock Creek needed him to inhabit a different role. With Zenger off the ball against box-and-one looks, his Mustang teammates could play four-on-four with significantly more spacing. And if Zenger’s face-guarder turned around for one second, Whaley knew to find Zenger cutting baseline.

“He was so good at knowing where I was,” Zenger said of Whaley. “The defender would have no idea what’s going on. We did that all the time.”

Throughout last season, Johnston said the Mustangs spent 10 minutes per practice repping their box-and-one offense. It paid off during their postseason run, when Zenger’s fellow seniors showcased their scoring prowess against Zenger-focused defenses.

Mason Sturdy and Renun Blount shot Riley County out of its box-and-one in the sub-state semis; Mason Vinduska notched a double-double against St. Marys one round later. Whaley set an early tone with seven first-quarter points against Royal Valley in the state quarterfinals.

Meanwhile, Zenger watched and waited from the 3-point arc. In seasons past, he might’ve forced contested jump shots. But as a senior, he understood his passivity had a purpose.

“He was able to be understood that, even when he gave up the ball, he was going to get it back probably later in that possession,” Johnston said. “I think it was patience that helped him the most.”

The last time Zenger wore a Rock Creek uniform, he hung his head low, wore a stern face and uttered nary a word. He was walking toward the locker room at Hutchinson Sports Arena after Rock Creek’s state semifinal loss to Galena in Hutchinson.

The Mustangs failed that day. They boarded the team bus to win a state title, and they came home with a third-place plaque. Zenger said the loss would hurt for “a while.”

A few weeks removed from that disappointment, however, Zenger sees his senior year with more perspective. Success, he says, means achieving your goals; it means fulfilling your potential.

Zenger spent the first three years of his career checking off individual goals with ease. But the Mustangs didn’t meet theirs until he realized his capacity for leadership.

So even without a state title, Zenger can’t possibly call his senior season a failure.

“It was definitely a success,” he said. “We won league, we won (the) Burlington tournament. We won sub-state. We made it to Hutch.