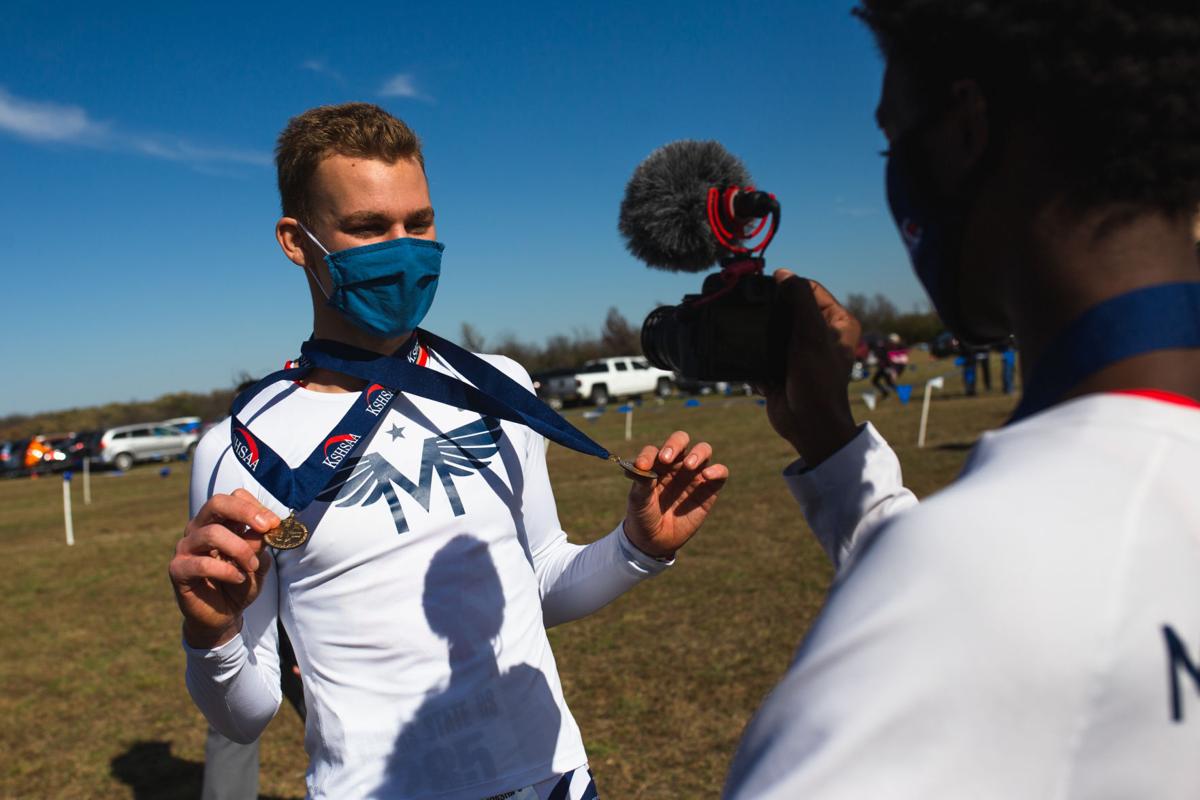 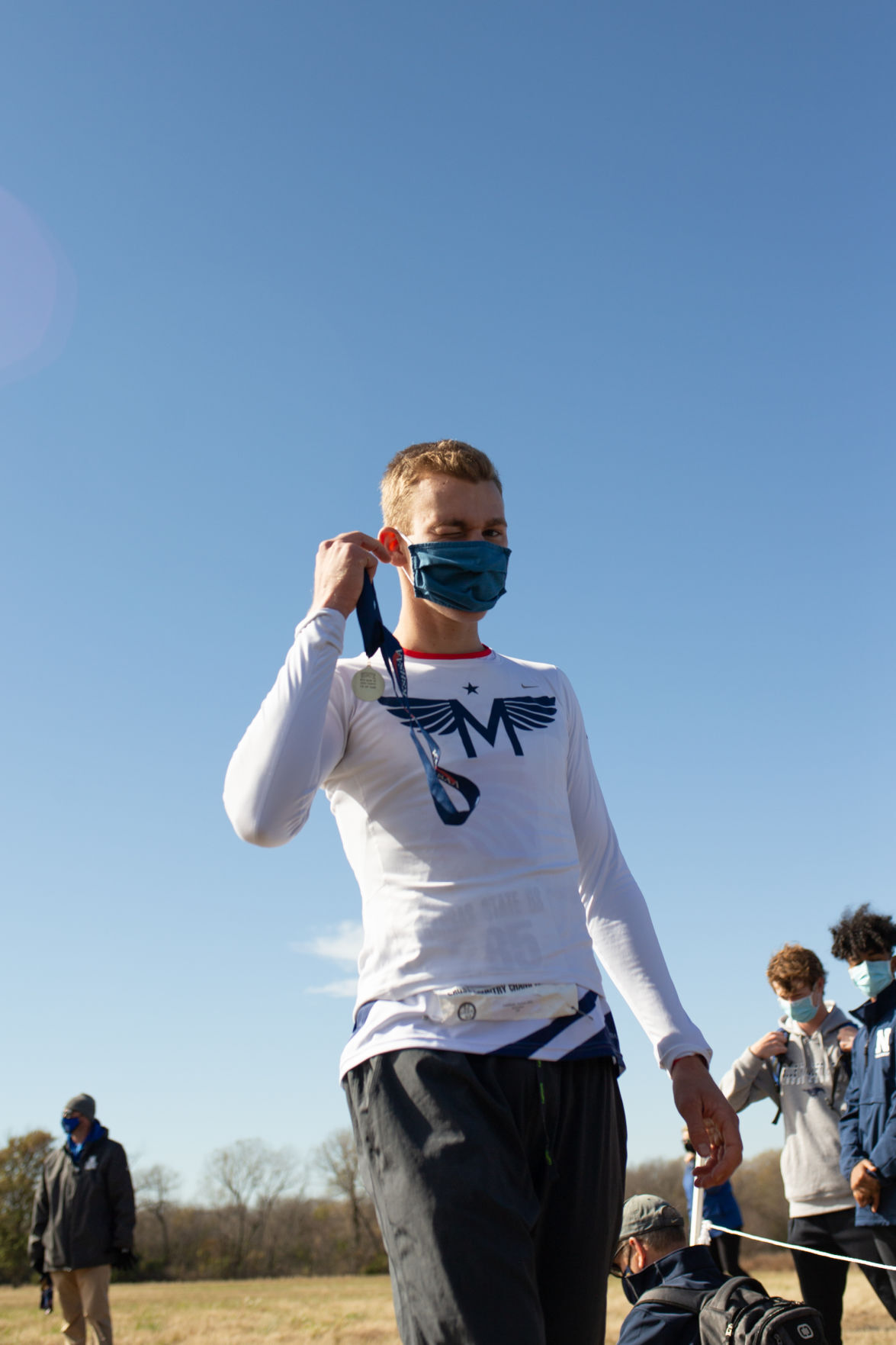 Daniel Harkin gives a wink after receiving his first place medal. Harkin was the only runner from Manhattan to place in the top 10, but the Indians did secure a second place team finish with 57 points. Lawrence Free State finished first overall with 49.

Daniel Harkin gives a wink after receiving his first place medal. Harkin was the only runner from Manhattan to place in the top 10, but the Indians did secure a second place team finish with 57 points. Lawrence Free State finished first overall with 49.

AUGUSTA — In the moments after winning his second state title in as many years, Daniel Harkin wasn’t happy.

He had just blown away the rest of the field, winning the individual 6A boys’ cross country title by almost 20 seconds over the next-closest competitor Saturday at Augusta’s 4 Mile Creek Resort. It was another feather in his cap, as he became the first Manhattan High cross country runner in boys’ or girls’ history to win two state titles in a career while also becoming the ninth double winner in boys’ or girls’ history in Kansas’ biggest high school class.

Still, it wasn’t what he was hoping for.

“My time was like the worst of my entire season,” Harkin said. “Usually that would have gotten me 20th place. I don’t really know how to feel, whether it’s about the time or the outcome.”

Harkin’s time, a 16:17.18 race — which is a 5:14.2 mile pace — was filled with both expected and unexpected difficulties. The course was unfamiliar territory to the Indians’ runners, while a consistent wind battered racers as they tried to work their way over the track’s numerous hills.

The wind also added issues for Harkin’s wardrobe, as the breeze blew up his shorts on occasion. That forced Harkin to attempt to cover himself while running the course.

“As everyone probably knows, I was wearing small shorts,” Harkin said. “That’s not a good combo for a 6-foot-2 guy with no underwear. I’d advise runners in the future to never do that.”

However, despite the added distraction of his wardrobe malfunction, Harkin opened up a sizeable lead at the beginning of the race and never relinquished it. His advantage steadily grew throughout the race, so much so that when he crossed the finish line, other runners weren’t even in sight.

The state title caps off a brilliant high school cross country career for Harkin. Prior to his two state titles, he finished second in the state as a sophomore and inside the top 10 as a freshman. There is an argument for him to be considered Manhattan’s greatest cross country runner of all time.

“He’s such a competitor,” head coach Susan Melgares said. “He always wants to do the best he can. Hopefully he realizes that being out there in this wind, where he had to do all the work by himself, it doesn’t lend itself to fast times. The competition is the main thing, and he really dropped a hammer on the rest of the field.”

Unfortunately for Harkin and the rest of the MHS team, he was the Indians’ only state champion on the day. The boys’ team finished second place overall, losing by eight points to Lawrence-Free State’s state championship-winning 49.

The race was decided by a fine margin, as Manhattan’s total time only was 13 seconds slower than Free State’s. However, when it came to individual battles, the Firebirds were just a hair better than the Indians on the day.

Similar to Manhattan’s “Pack Attack” style, Free State showcased its own talented group by taking third, fifth, seventh, ninth and 25th among the team qualifying times. Manhattan, on the other hand, had its runners place eighth, 13th, 14th and 21st in team qualifying times to go along with Harkin’s first-place finish.

Despite coming up just short, Melgares was satisfied with the team’s effort. It was clear Manhattan’s runners were spent, as a few were seen leaning on each other for support as they exited the finishing area.

“Everybody out there gave it all they had today,” Melgares said. “I saw a lot of people, Ben Mosier being one of them, in the middle of that race stepping up when they got tired and picking up some points. I didn’t see anybody quit.”

For the first time this season, Jenna Keeley tasted defeat.

The junior was undefeated in meets heading into Saturday’s event. And for a good while, it appeared she had a chance to stay that way.

As the runners neared the halfway point of the race, Keeley was in the thick of things in the leading pack. She plowed forward alongside around six other runners as the group made its way into the second lap of the race.

Runners eventually started to drift away from the leaders. Soon enough, it was Keeley’s turn, as the leading runners started to leave her behind.

Keeley went on to finish fourth with a time of 19:12.05. Olathe North freshman Anjali Hocker-Singh won the individual title by finishing the race in 18:39.16.

Still, Keeley’s finish was one she could be proud of. She kept pace with some of the top runners in the state for nearly the entirety of the race.

“It was tough and it hurt,” Keeley said. “My goal was to stay in the top two packs. I went out fast, but I think that was OK because I got to hang on for the rest.”

Keeley was one of the few MHS girls’ runners to have a good day on the course, as the Indians finished sixth overall with 187 points, 128 points back from first place Olathe West.

The team, which used its depth to edge out opponents throughout the season, couldn’t keep up with the pack Saturday. With exception of Keeley, Manhattan’s scoring runners finished 35th, 47th, 48th and 54th in team qualifying times.

“I think they weren’t used to maybe such a crowd,” Melgares said. “It’s a very high-quality girls’ field in Class 6A. Maybe they weren’t expecting it to go out quite as fast. That’s something for me to figure out in the offseason: how to inoculate them for next year.”

The sixth-place finish is right in the middle of the pack, as 12 teams competed the state title. Despite coming up short of the team’s goal — a podium finish — Melgares was thankful to have had the opportunity to compete at the state meet in the first place.

“If you’d have told me in June that we’d get this far, I’d have been jumping for joy,” Melgares said. “Because in June, in September, you just don’t know if you’ll have a season. Every day, I would come home from practice and think, ‘Another day, that’s a victory.’ Every meet, we got another one in. So I think as the dust settles here, I’ve just got gratitude for all the kids and the work they’ve done.