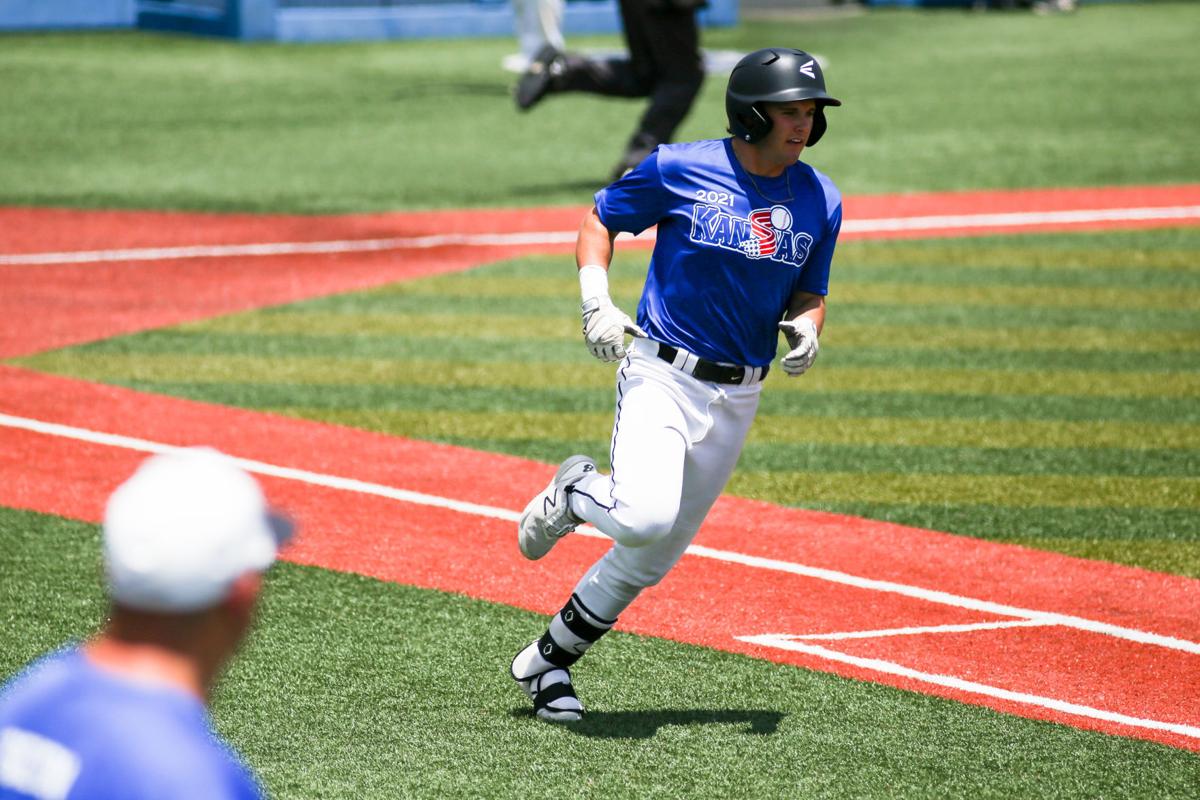 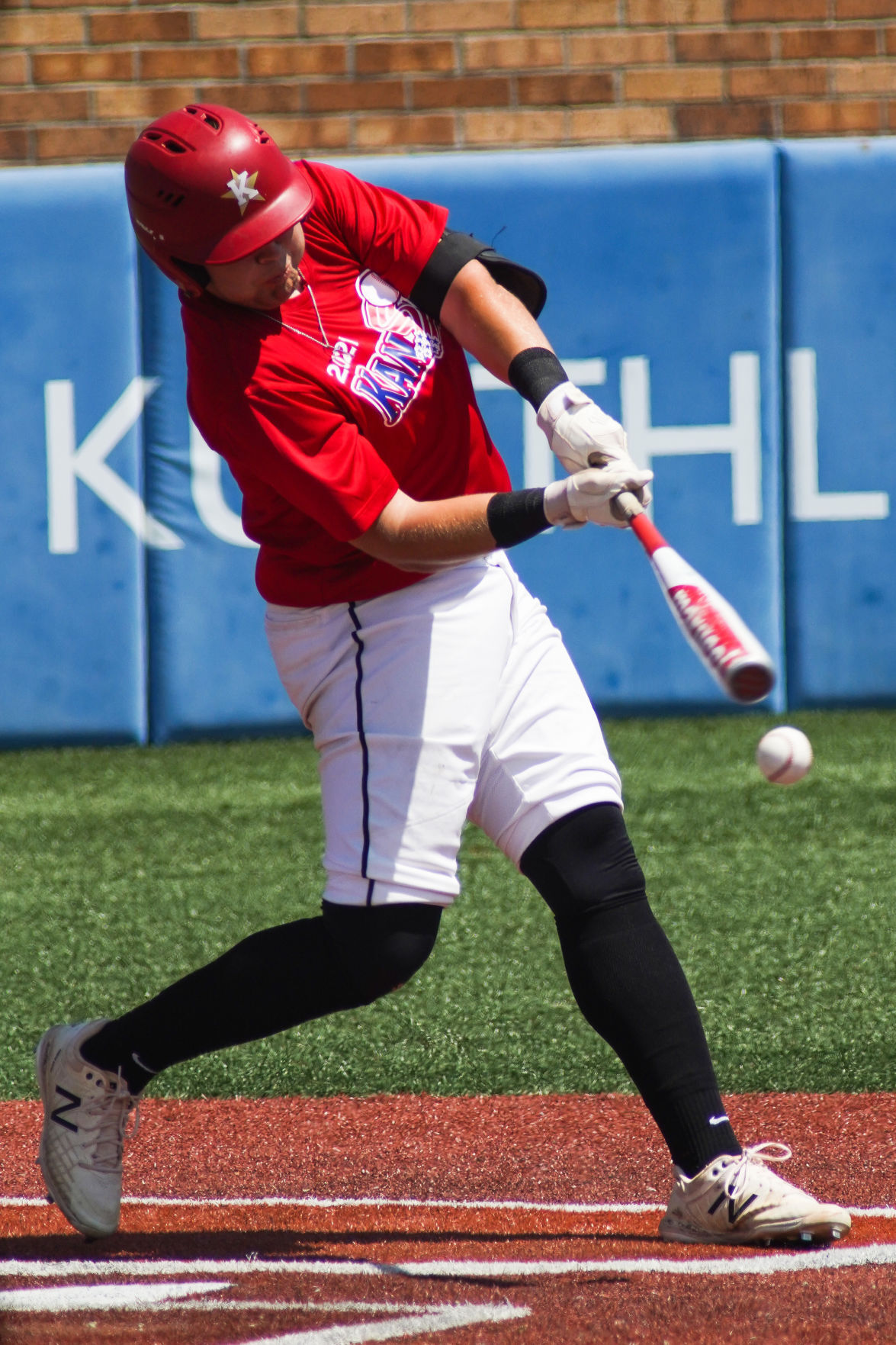 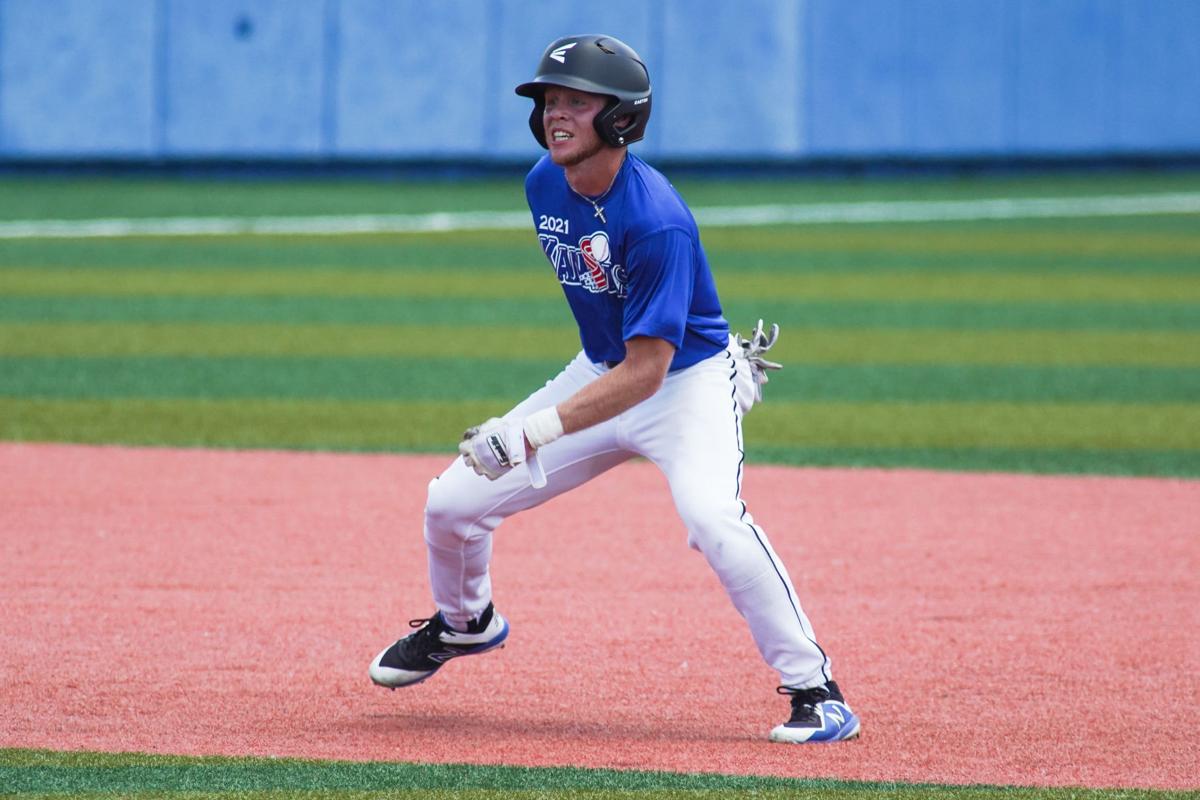 Rock Creek senior Brooks Whaley watches a pitch form second base during Wednesday's KABC senior All-state game. Whaley has not yet signed with a school but plans to visit Emporia State. 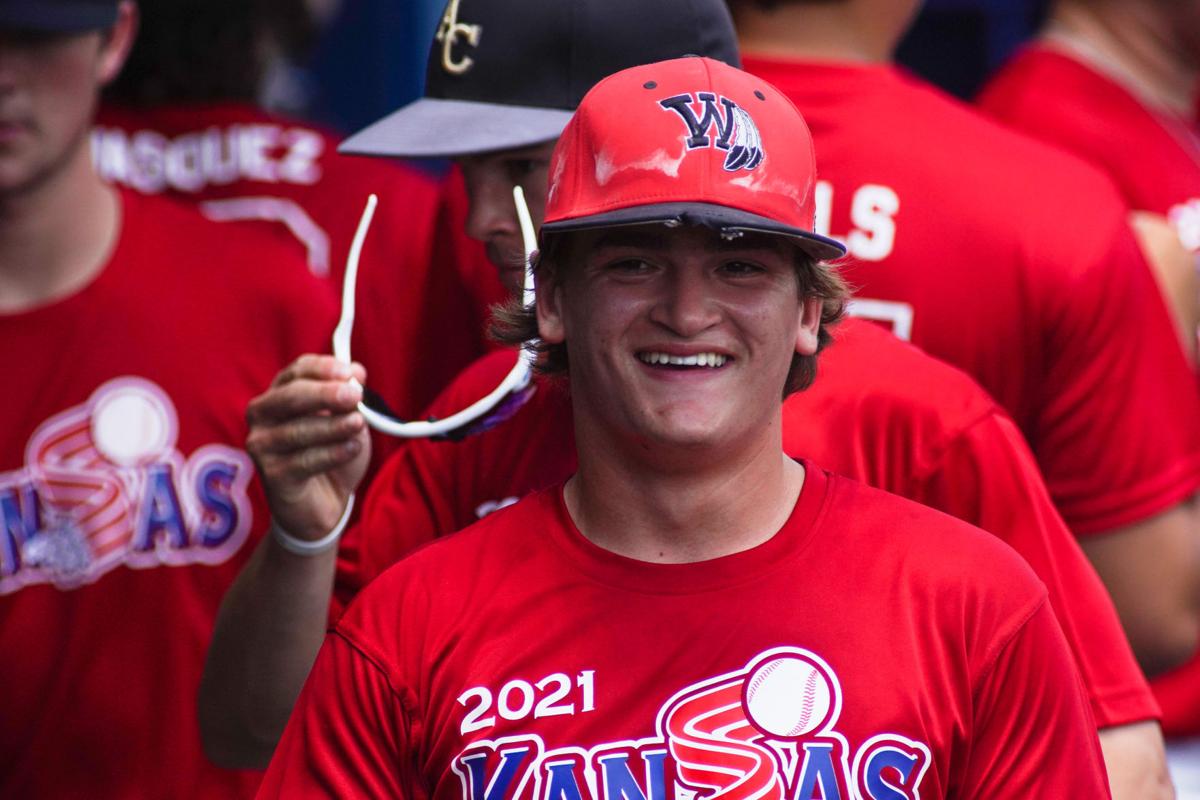 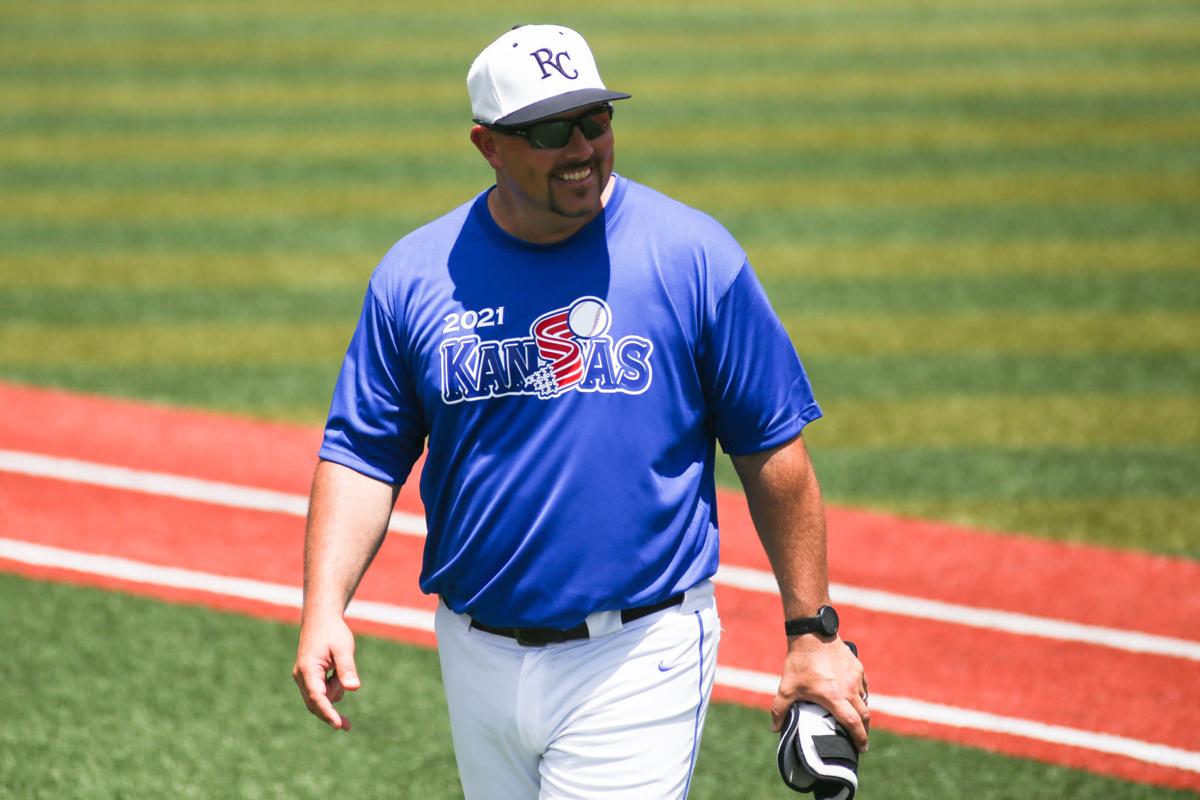 Rock Creek head coach Shane Sieben smiles at first base during Wednesday’s KABC senior All-state game. Sieben was awarded his 3A Coach of the Year award during the game. 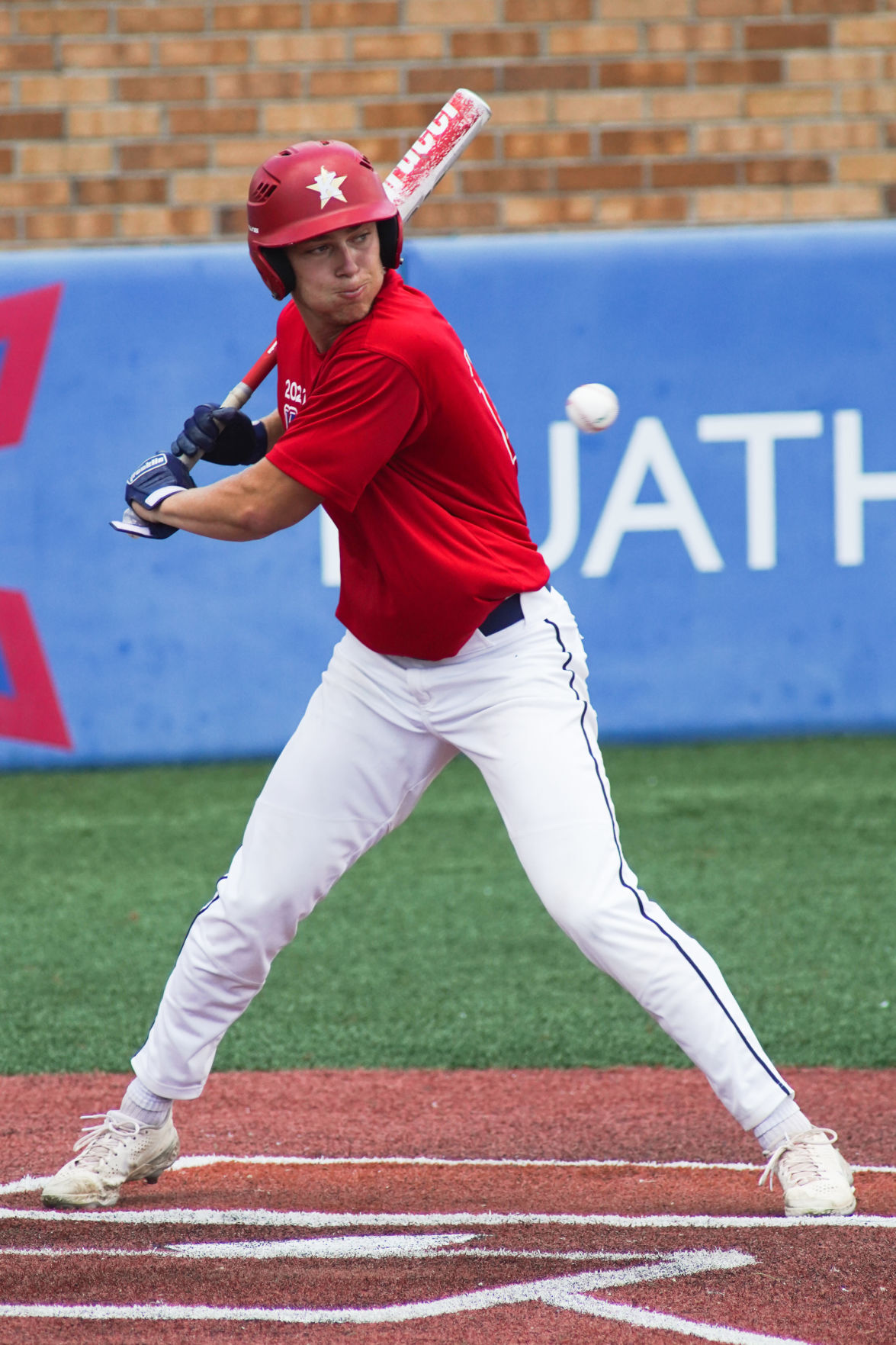 Rock Creek senior Brooks Whaley watches a pitch form second base during Wednesday's KABC senior All-state game. Whaley has not yet signed with a school but plans to visit Emporia State.

Rock Creek head coach Shane Sieben smiles at first base during Wednesday’s KABC senior All-state game. Sieben was awarded his 3A Coach of the Year award during the game.

While Whaley spoke with media members, Sturdy waited. They’d grown up together, played hundreds of games together, lost and won a state title together. So after Wednesday’s KABC Senior All-State Game, they would leave together.

Sturdy and Whaley’s Blue team, comprised of all-staters from classes 1-3A, lost 10-6 to the Red team filled with their 4-6A counterparts. But for once, the score didn’t matter.

Sturdy and Whaley cemented themselves as champions when they beat Anderson County 19-0 in the 3A title game May 28. They played Wednesday’s game for playing’s sake. For fun, for ceremony, for closure.

One last chance to be teammates.

“It’s sad and it’s also super exciting,” Sturdy said. “We’ve been through a lot together. All the games and memories, through the good and the bad, this is the perfect way to end it.”

Rock Creek’s senior duo closed their careers against a pair of familiar adversaries. Riley County’s Connor Holle and Nic Allen, who have fought the Mustangs for Mid-East League titles the last four years, played first base and outfield for the Red team.

Holle (1-for-1, two walks) and Allen (1-for-2, run scored), who have played together since they were “yea big,” according to Holle, felt the nostalgia, too. When Allen moves southeast to play football at Emporia State next fall, Holle will drive the opposite direction to play baseball at Fort Hays State.

They’ll keep in touch, but Holle doubts they’ll ever share a baseball field again. “Not until we’re like 30 and playing slow-pitch softball,” he said.

“That’s why today felt good,” Holle said. “It’s good to have this chance to play before we split.”

Wamego pitcher Ryan Erickson, an Ottawa football commit, already had said goodbye to his high school teammates before stepping onto the turf in Lawrence. As the Red Raiders’ only representative, Erickson allowed one run in the one inning he pitched Wednesday. He didn’t hit, but he enjoyed his new teammates’ company.

“I kind of just made friends today,” he said.

Friends come easily to Erickson, who described himself as Wamego’s “energy guy.” Red Raiders coach Weston Moody co-signed the label after Remy, Erickson’s Goldendoodle, frayed the brim on Erickson’s hat. When Erickson asked for a new hat, Moody told him no.

“You’ve got to keep that,” Erickson remembers Moody saying. “That’s what represents you.”

Rock Creek head coach Shane Sieben also represented the Mustangs at Hoglund as the 3A Coach of the Year. Sieben called it an “honor” to coach Whaley and Sturdy one more time, even if Whaley ended the third inning by getting doubled up on a fly ball to shallow left field (“I fell asleep on that one,” Whaley said).

To Sieben’s point, Whaley got to second on a double to right field that would’ve been a single for most players. He finished 1-for-3; Sturdy finished 1-for-2; now they’re both finished as Mustangs.

They might not be done as teammates, though. Whaley is visiting Emporia State, where Sturdy already has committed, soon. Both players would love to reunite as college teammates.

Sieben, on the the other hand, still can’t fathom that they’re leaving. He taught both in private lessons before he coached them at Rock Creek. He watched them develop into all-state players, set the culture for his Mustangs and achieve their ultimate goal.

Now they won’t play for Sieben again, which, even as he coached their final game, he struggled to process.

“I still think they’re going to be in a Rock Creek uniform,” Sieben said. “I’m working on a COVID extra year.”