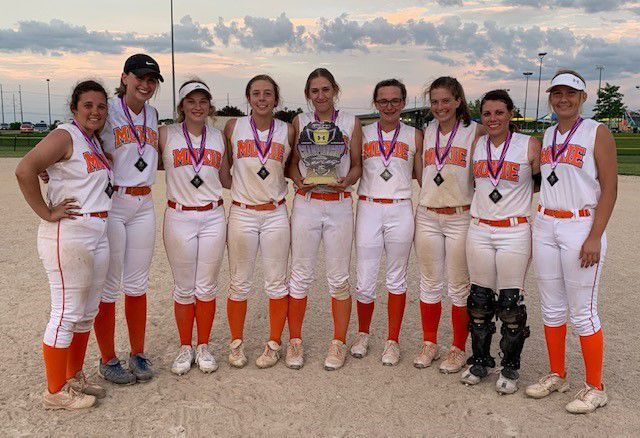 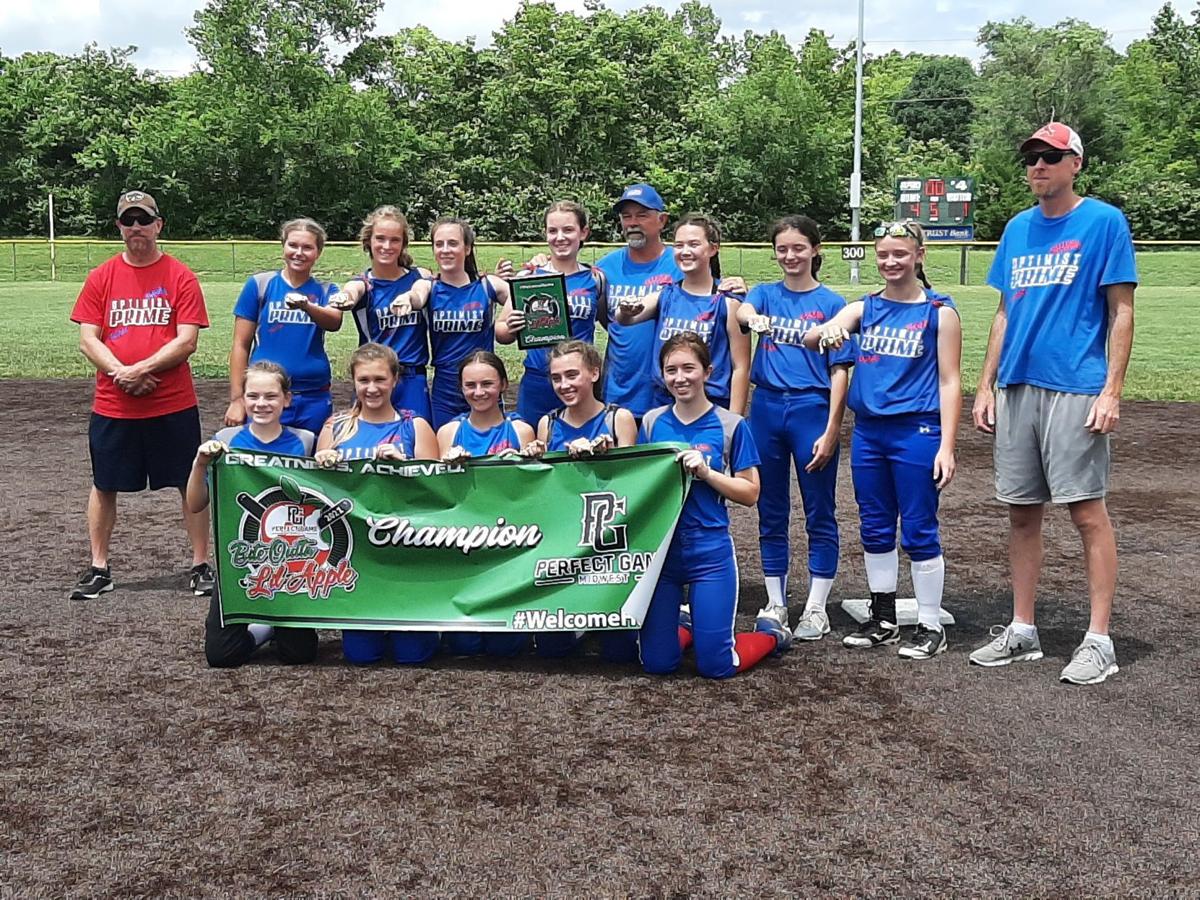 Prime beat Top Gun 4-1 to take the title and cap an undefeated weekend. Candace Lippe pitched to Allison Adams, and the pitcher-catcher duo started the scoring for Manhattan.

Prime beat the Flint Hills Storm 8-5 in the semifinals. Brummett pitched and Adams caught. Candace Lippe smashed a home run that scored Fobes in the first, and Adams tripled and scored on a wild pitch.

In the final pool play game, Prime beat Mammoth Sports Attitude 8-5. Lippe pitched with Benoit catching. Scofield had a single, and Lippe, Hayley Fobes and Kylie Shivers each doubled. Adams added two singles and Schartz had a double and a triple. Maddie Fobes was the courtesy runner and scored two of the runs in the game.

Prime beat Top Gun from Wichita, 4-3 in their second pool play game. Brummett earned the pitching win and Adams was behind the plate. All the scoring came in the second inning when Brummett led off with a single, followed by singles from Scofield, Peabody and Fobes. Lippe got the final RBI on a sacrifice bunt. Ball had 2 singles and Lippe added a single and triple during the game.

Prime began pool play with a 4-1 win over the Flint Hills Storm. Lippe got the win on the mound and Hannah Benoit handled the catching duties. Kat Ball plated Adams and Schartz with a single in the first inning. Then, in the fifth inning, Schartz scored Lippe and Adams with a single.

Manhattan Optimist Prime is 14-6 on the year.

The Moxie, which is comprised primarily of Rock Creek softball players, capped a 4-2 weekend with a 9-3 win over the CKC Lady Crushers. Manhattan beat the Fireballs of Sabetha 5-4 in the semifinals, Rebels softball 12-0 in pool play, and they beat Sabetha 7-2 to start the tournament.

Sophia Haverkamp and Ali Jones shared the pitching duties for the weekend. Haverkamp fanned 19 batters and Jones fanned 15. Lexi DeWeese led the offense with eight hits and batted .571 for the weekend. Jenna Weeers and Kinley Ebert each hit .500, and Haverkamp had a team-high 7 RBI’s. Emma Morris hit .417 with 2 doubles.

The Moxie will travel to Wichita next weekend. Rock Creek graduate Kyla McCormack was a guest player this weekend. Moxie is coached by Michele Holaday and Jeri Brummett.

The Diamonds lost 8-2 in Sunday’s semifinal against eventual-champion Extreme. After cutting the lead 3-2 in the sixth inning, the Diamonds allowed five runs in the seventh The Diamonds failed to earn a baserunner in the first four innings.

Manhattan beat Next Level U in its final pool game. After falling behind 3-0 after two innings, the Diamonds rallied to score the maximum five runs in the third and another five runs in the fifth to pull away. Solveig Chase, Samantha Thompson and Sophia Peabody each had two RBIs, and Grayson Neitzel stole five bases. Chase pitched four innings, striking out six in the win.

The Diamonds beat the Bomb Squad 11-3 in their second pool game. Josie Alesana and Preslee Colby each lead the team with two RBI’s while Kaimey Evans stole four bases in the game. Thompson pitched a complete game for the Diamonds, striking out three over three innings.

Manhattan opened pool play with a 9-2 win over Express 12U. The Diamonds scored two runs in the first and second innings before pulling away in the third.

During pool play games the Expos finished with a game record of 2-1 – earning them a spot in the upper bracket for Sunday games.

Sunday morning, the Expos were eliminated from bracket play with a 10-0 loss to Xtreme.

The Expos won their second pool game against the Topeka Angels with a final score of 7-3.

Tied at three in the bottom of the third, Worden hit a two-run double on a 1-2 count. Folck started for the Expos, surrendering three runs on three hits over four innings and striking out four. Worden, Folk, Myer and Connell recorded hits in the game.

The Expos lost 11-4 in their tournament opener against the Shed As. Worden allowed five hits and nine runs in one inning. for one inning. Maddie Myers threw one inning in relief.

The Expos had totaled seven hits, and Myers and Worden tallied two each.. Avarye Meeker stole three of the Expos’ eight stolen bases.

The Renegades started bracket play falling with a 2-0 loss to the Topeka Bombers. The Bombers scored one run in the first inning, and the Renegades couldn’t come back despite six hits. Their offense stranded nine base runners. Alayna Ault allowed threed hits, three walks and struck out 12.

The Renegades finished Day 1 with a 4-0 loss to the Flint Hills Outlaws. Ault toed the rubber again and allowed four hits, four walks and struck out six. The Outlaws scored two in the second and two in the third. Manhattan struggled at collected three hits, one apiece from Brooklyn DeChant, Nia Sackrider and Alex Rodriguez. Manhattan carried early tournament momentum into a 10-8 win over the Clay Center B’s. The Renegades scored half of its runs in the first inning. Hayden Matzke allowed three runs in the first two innings before Ault entered in relief. Then DeChant entered in the third and finished the game. The Renegades beat Express 7-5 to open the tournament.