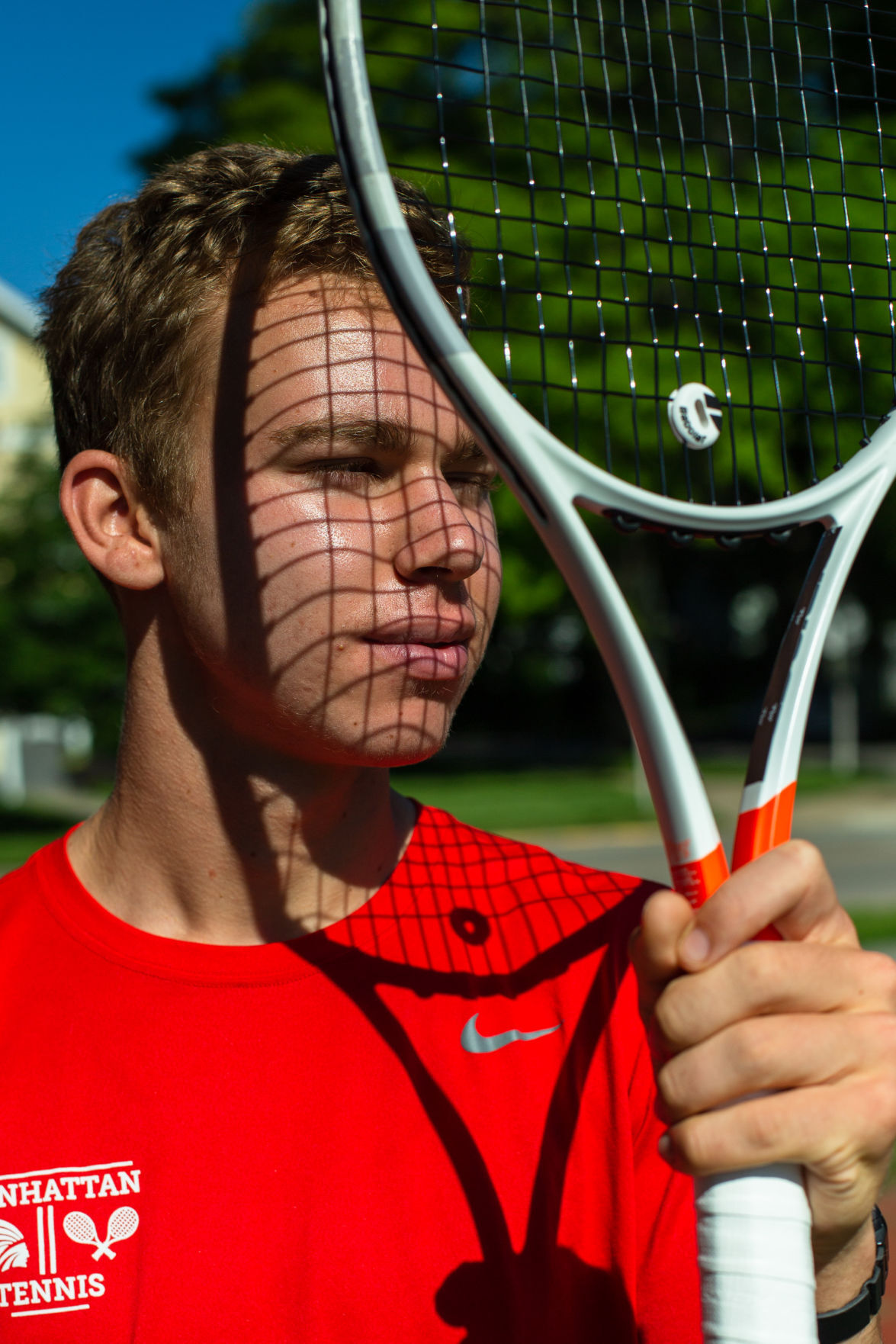 Dan Harkin, Manhattan High graduate, holds his racket at City Park earlier this month. Harkin picked up three state titles during his senior year, including two individual first-place finishes in cross country and tennis. Most recently, Harkin contributed to the MHS boys’ first-place team finish at the state track and field meet May 27. 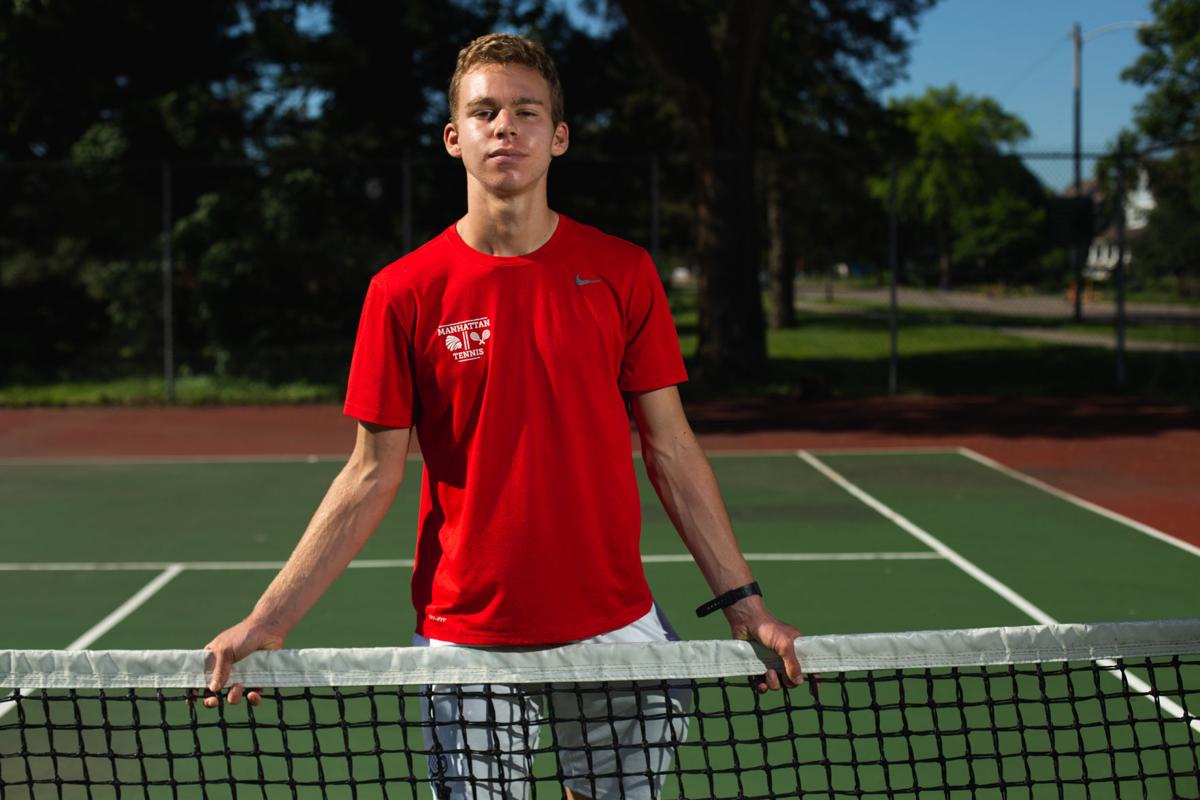 Dan Harkin, Manhattan High graduate, stands for a portrait in City Park. Harkin picked up three state titles during his senior year, including two individual first place finishes in cross country and tennis. Most recently Harkin contributed to the MHS boys' first place team finish at the state track and field meet on May 27. 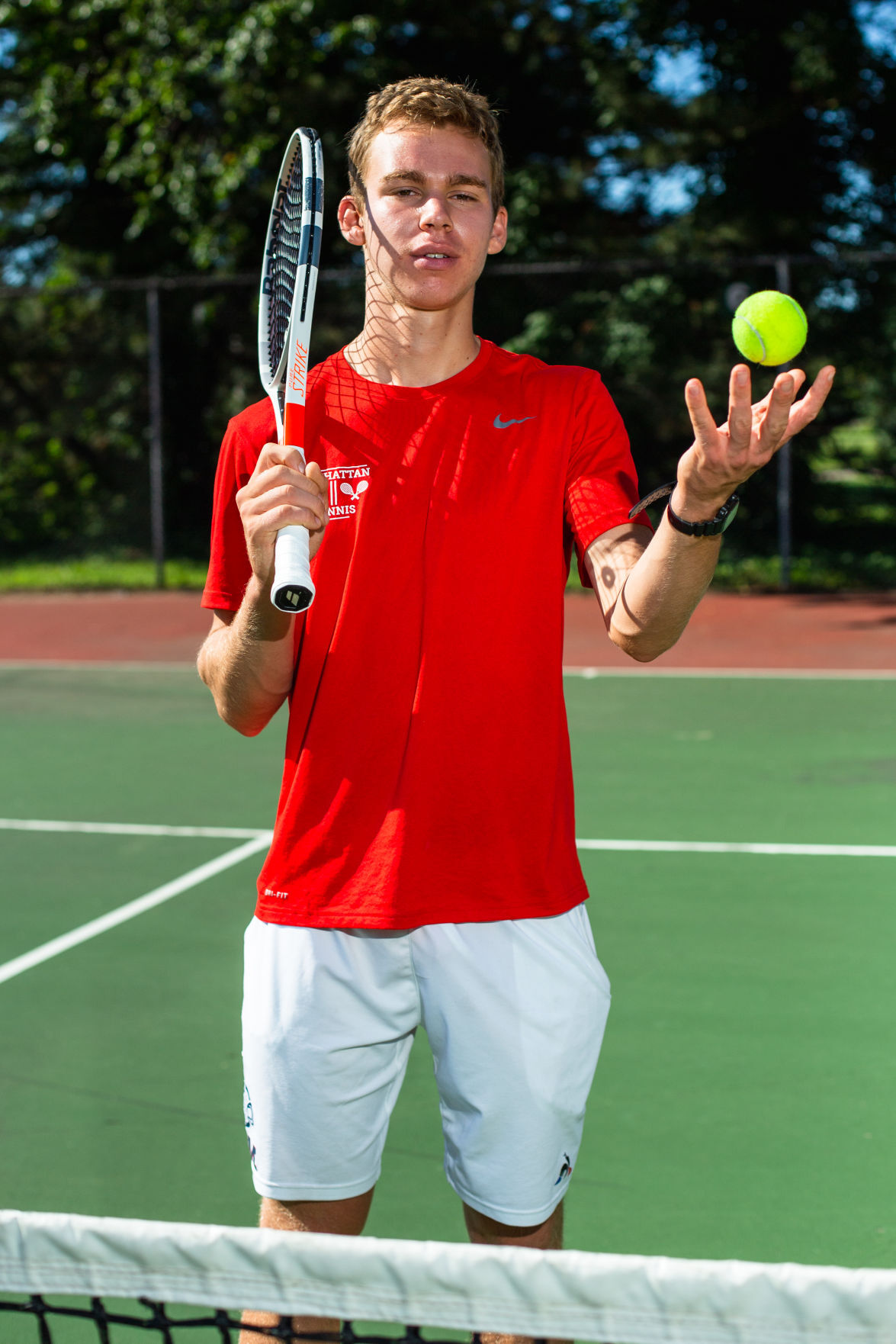 With his victory in the title match at the Class 6A state tennis tournament last month, Harkin became Manhattan High’s first boys’ individual state champion since 1982.

Dan Harkin, Manhattan High graduate, holds his racket at City Park earlier this month. Harkin picked up three state titles during his senior year, including two individual first-place finishes in cross country and tennis. Most recently, Harkin contributed to the MHS boys’ first-place team finish at the state track and field meet May 27.

Dan Harkin, Manhattan High graduate, stands for a portrait in City Park. Harkin picked up three state titles during his senior year, including two individual first place finishes in cross country and tennis. Most recently Harkin contributed to the MHS boys' first place team finish at the state track and field meet on May 27.

With his victory in the title match at the Class 6A state tennis tournament last month, Harkin became Manhattan High’s first boys’ individual state champion since 1982.

For the first time in months, Dan Harkin is relaxing.

Eight days after Harkin helped Manhattan High’s track team win the Class 6A state championship May 27, he said he’d done “nothing” since. He’d slept until 10, sometimes 11 a.m. He’d watched Netflix, and he’d enjoyed John Krasinski’s “Quiet Place 2” in a movie theater. (The Harkins can’t remember the last time they went to the movies before that).

Harkin deserves a respite after the 12-week grind he endured this spring. Beginning in early March, Harkin’s life revolved around track laps and tennis balls. After seven hours of Advanced Placement classes, he’d play two hours of tennis and run 10 to 11 miles per weekday. He ran even more of each as the postseason progressed.

Harkin’s marathon training regimen paid off May 15, when he won Manhattan’s first individual state title in boys’ tennis since 1982. It may have hurt him 12 days later, however, when he relinquished his lead on the last lap of the 3,200-meter run at the state track meet.

But Harkin’s status as The Mercury’s All-Flint Hills Athlete of the Year is less about accolades than endurance. Sure, his state tennis title, school record in the 3,200 and pair of top-seven finishes (one runner-up) at state track helped his case. But the most impressive part about Harkin’s spring sports season is the fact he never threw a racket, skimped a mile or crumbled under his own lofty expectations.

In retrospect, even Harkin acknowledges how onerous a challenge he embraced.

“I’m glad I did it,” Harkin said, “because now I can look back and be proud of it. But I definitely would not want to do that for another 10 years or something.”

Harkin realized the commitment required to play tennis and run track three years ago. On the first day of his freshman spring sports season, Harkin walked through Manhattan High’s East Campus doors at around 7:30 for school.

“Geez,” he remembers thinking. “This is gonna be a long season.”

He’d worked a long time to earn that long season, though. Harkin swung his first tennis racket at around five years old, and he started playing local high school players at 11. “Most of them could beat me,” he said.

He first raced at Manhattan Country Club, and his parents, Ken and Kate, realized his talent during a family vacation to Colorado, when they witnessed Dan outrunning bikers on Vail Mountain.

Dan liked running because of the “Superman” feeling it gave him afterward. He liked tennis for its technical intricacies. He didn’t think he could participate in both until he saw both schedules: no overlap.

After a meeting with Manhattan athletics director Mike Marsh, however, Harkin promised to commit all his energy to both sports.

“We had to be all in,” Kate said. “The loss of one sport would mean the loss of both sports. We couldn’t quit one once we started on that path.”

With that commitment came sacrifices. For Dan, springtime meant fewer movies, more rain checks and less time to play the piano. (His mother admits Dan is no “concert master,” but he enjoys playing movie scores, classical music and, as Ken said, “anything that will annoy his sister.”)

And though the Harkins always ate dinner together, their meal times fluctuated. Sometimes, Ken said, they’d eat as late as 9 p.m.

Neither Ken nor Kate ever heard Dan complain about his workload, but Dan admitted he needed occasional breaks. When school deadlines accumulated, he’d drop a sport for two days. Those pauses hurt his progress, but school came first. And in Kate’s words, “Even the most accomplished kid can only be one place at one time.”

Kate’s words rang especially true this spring, when tennis, track, A.P. tests and graduation all tugged at Dan’s attention. After losing his junior season to the coronavirus, he pushed himself harder than ever on a quest for state titles. Plural.

The last four weeks were the hardest. After seven hours of school, Dan pushed himself to play four hours of tennis each day. He missed graduation because it overlapped with Day 1 of the state tournament.

Dan also ran 100 miles (about 14 per day), the week before state track. Sometimes before school, sometimes after tennis. He ran eight after returning home as the state singles’ champion, which, as he observed, “Kind of bites.”

After seven laps of the state 3,200 race, however, Dan could see the payoff for his incessant grind. He’d run the first two laps on a sub-nine-minute pace, and he maintained the lead with 400 meters to go.

But as he shifted into final gear … “I don’t know,” Harkin said. “I don’t even remember the last lap. I don’t know if I was passing out or something like that.”

Harkin finished seventh in the event he won as a sophomore. He still finished second in the 1,600, but he fell short of the goal he’d been chasing since March.

Kate says the condensed postseason schedule played a role. Harkin had to run for a state title just six days after qualifying at his regional. Ken thinks Dan started the race with too much vigor; his first too laps were too fast. And Dan admitted wishes he would’ve run more sprints and fewer miles.

But all of the Harkins agree: Dan’s hectic schedule played some role in his disappointing finish. Should he have taken more breaks? Eased his training leading up to state? Maybe played a bit more piano?

Harkin can’t say, and he doesn’t have time to think about it. His next tennis tournament is June 23 in Oklahoma City — “There’s no such thing as ‘sedentary Dan,’” Ken said — and Kansas Wesleyan, where he will attend college later this year, encourages freshmen to arrive on campus August 5.

He’ll maintain his dual-sport drive in Salina. Or, at least, “That’s the plaaaaan,” Dan said, the drawn out short “A” hinting of hesitation. He’d drop distance running if his schedule became too hard to manage. And his dad said Dan might run fewer miles per week to mitigate his burden.

Dan sees the value in his senior-year strife, though. Not because of the medals and trophies it earned him — he “thinks” they’re “somewhere” in his room — but because of the work ethic it taught him. Whatever he chooses to do (he plans to major in a math or science field), it won’t be as complicated as the schedule he managed this spring.

“Hopefully I’ll just make everything seem easier,” Dan said. “I won’t have to be doing all this, you know, seven hours of school and then two hours of each sport.”

O’Connell won the Class 6A state title in the shot put and broke a 44-year-old school record in the same event.

Jones was the Indians’ leading scorer (20 points) en route to their Class 6A state title. He finished second in the long jump and triple jump and fifth in the high jump.

Johnson finished second in the Class 6A in the triple jump, fifth in the long jump, eighth in the 400 and ran on the 4x400 relay team that finished seventh. She also broke the school record in triple jump at the regional meet.

Burton captured Class 3A state titles in both the discus and shot put. She owns the school records in both events.

Brummett finished second in Class 3A in the javelin throw. She owns the school record in the same event.

Duncan finished second in the 100- and 200-meter races at the Class 1A state meet.

Zoeller finished second in the triple jump and sixth in the long jump at the Class 1A state meet.

Schutter won the Class 2A state title in the long jump while finishing fourth in the triple jump and eighth in the 100-meter race. She owns the school records for long jump and triple jump.

Yungeberg won the Class 2A state title in the shot put and javelin while finishing second in the discus.

Faulkner placed second in Class 4A in the 100-meter dash and third in the 200.

Grynkiewicz earned first-team All-Centennial League honors after switching positions midseason. She started the season as a forward but shifted to midfield after senior Faith Beyer tore her ACL.

Ruliffson, a midfielder, earned second-team All-Centennial League honors after starting for a Manhattan offense that led Class 6A in scoring.

Snowden, a forward, earned All-Centennial League honorable mention acclaim after starting for Manhattan’s offense, which finished first in Class 6A in goals scored.

Porter, a defender, earned All-Centennial League honorable mention acclaim after starting for a Manhattan defense that dominated opponents during the 2021 regular season.

Gerstner shot a 79 (one shot behind the medalist) to finish runner up at the Class 1A state golf tournament and lead the Wildcats to a state team title.

Cornelison shot an 85 to finish eighth at the Class 1A state golf tournament and help the Wildcats win the state championship.

Tyner tied for fourth after shooting a 151 (9-over) at the Class 4A tournament. The Red Raiders finished second overall.

Long finished in a three-way tie for eighth after shooting 159 (17-over) at the Class 4A tournament. The Red Raiders finished second overall.

Hoyos shot 91 to finish 12th at the Class 3A tournament.

Hicks was part of the first relay team to medal at state during head coach Alex Brown’s tenure (since 2016-17). The Indians’ 200 medley relay team finished sixth at state.

Francois was part of the first relay team to medal at state during Brown’s time as head coach, which dates back to 2016-17. The Indians’ 200 medley relay team placed sixth at the state meet.

In addition to the relay medal, Steffensmeier picked up medals after finishing sixth in Class 6A in the 100 butterfly and the 500 freestyle.

In addition to the relay medal, Perez won medals for placing fourth in Class 6A in the 100 breaststroke and sixth in the 200 individual medley.