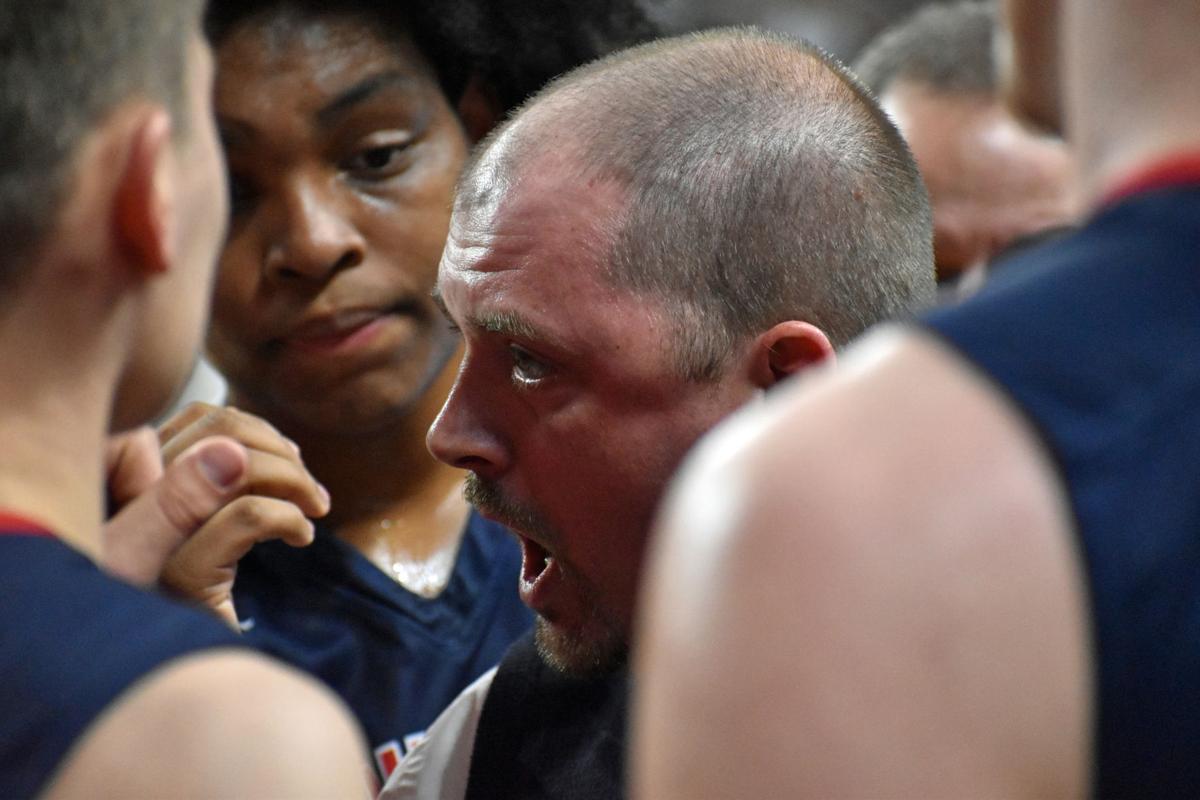 Manhattan head coach Benji George speaks to his team during a timeout in a 6A state tournament game in Wichita last March. Manhattan lost to Topeka West on Friday 71-52. 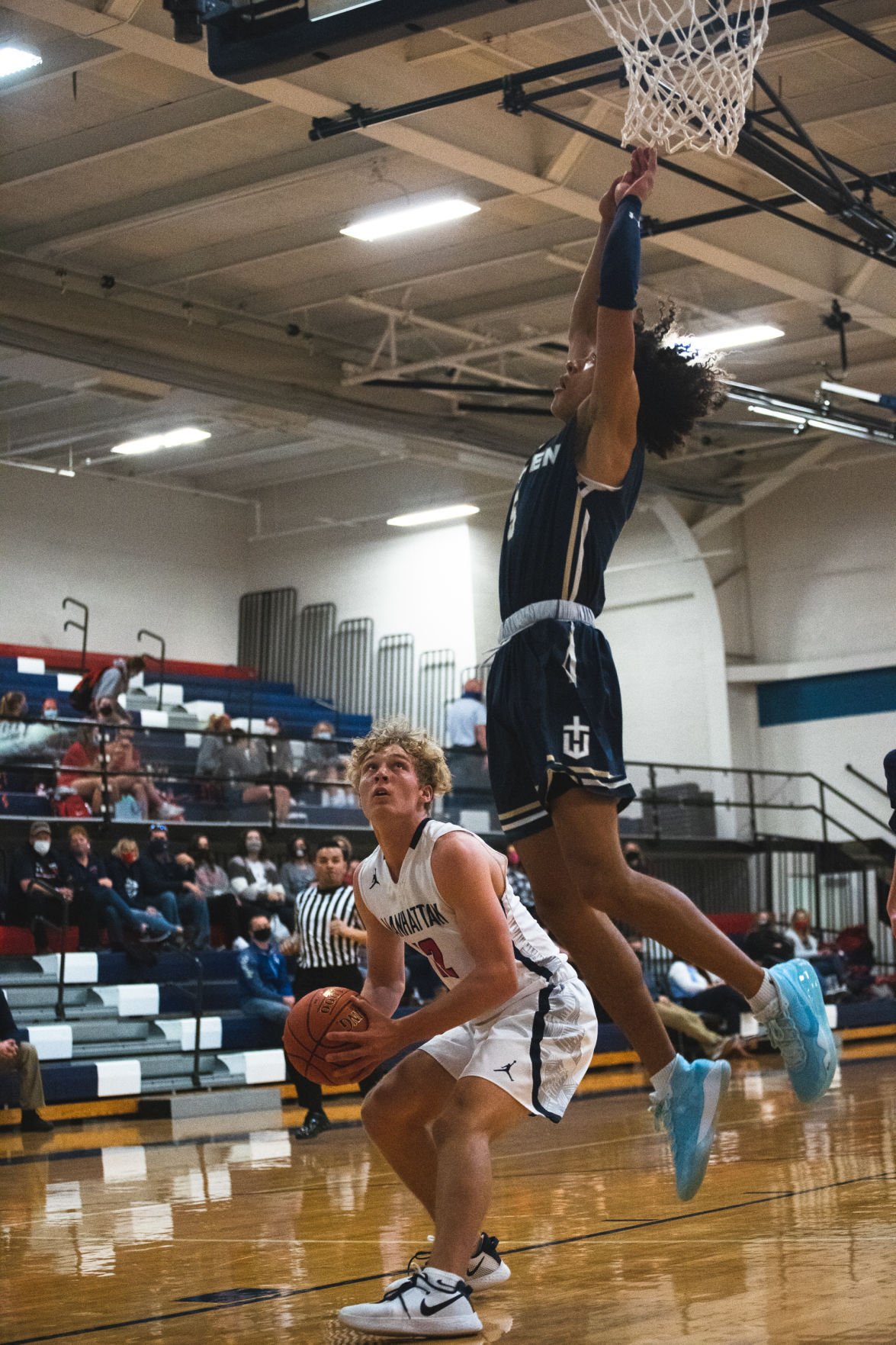 Manhattan senior Owen Braxmeyer (12) pump fakes and watches a Hayden defender soar past before securing a layup in a Dec. 11 game. The MHS boys' basketball team has paused team activities due to the coronavirus.

Manhattan head coach Benji George speaks to his team during a timeout in a 6A state tournament game in Wichita last March. Manhattan lost to Topeka West on Friday 71-52.

Manhattan senior Owen Braxmeyer (12) pump fakes and watches a Hayden defender soar past before securing a layup in a Dec. 11 game. The MHS boys' basketball team has paused team activities due to the coronavirus.

TOPEKA — Throughout the first half of Friday night’s game, it looked as though the Manhattan boys’ basketball team was playing in quicksand.

The Indians were a step late in all aspects against Topeka West. The team was out of place on its defensive rotations, a second too slow on its passes and a beat out of sync in its decisions.

Against a team with the talent of Topeka West, that is a recipe for disaster.

The Chargers took it to Manhattan Friday night, outscoring the Indians 38-17 in the first half before going on to win handily, 71-52.

Manhattan’s problems, first and foremost, were on the defensive end.

Initially, the Indians (1-3) deployed the same 2-3 zone that stifled Junction City’s offense Tuesday. However, while that zone worked because of the Blue Jays’ troubles with shooting from deep, Topeka West had no such issues.

The Chargers hit just enough shots from the outside early to force Manhattan into a man-to-man defense. That strategy played right into the hands of Topeka West’s offense, as the Chargers rely on their athletic ability to stretch defenses and push the pace.

“Our game plan was to run a 2-3 zone, slow them down, make them shoot and make them prove it to us that they can shoot,” senior guard Owen Braxmeyer said. “I think it was (Zander Putthoff), he hit a couple 3s, and that’s when we kind of had to go out of it. They got downhill in our zone and just attacked the gaps better than Junction City did.”

The centerpiece of it all was West’s Trevion Alexander. The 6-foot-3 senior forward was borderline unstoppable, knocking down 11 of his 15 shots and finishing with 30 points.

Alexander’s performance is a familiar one for Manhattan: It has allowed an opposing player to score at least 28 points in three of its four games.

Whereas the Indians could field several strong defenders like Mitch Munsen or Antonio Barron in the past, this year’s group of younger players has struggled to stay in front of opposing teams’ top scorers. With Cade Perkins, one of the team’s better defenders, missing his second straight game with an ankle injury, George has struggled to find good matchups for his defense.

“Cade is a Swiss army knife in terms of what we need him to do, and it is hurting us to be without that,” George said. “I thought that showed tonight. As a team, we do need to be better defensively. There’s no doubt. Things are happening fast out there and we’re not recognizing it yet.”

Manhattan’s youth also limited its offensive abilities in the first half.

MHS turned the ball over 12 times in the first half. A number of those came from the team’s underclassmen being swarmed by a group of Chargers. Topeka West started four seniors and played just four underclassmen in the game.

For comparison, Manhattan started two underclassmen and played seven total underclassmen. That group contributed just seven points for the Indians in the first half.

“It was a little shell shock,” George said. “In the first half, (it was) just that high level of Centennial League play and it’s a veteran team and they’re big and long. Young guys especially were a little shocked.”

To its credit, Manhattan’s younger group bounced back in the second half. Sophomore Cameron Carr scored 10 of his 14 points in the third and fourth quarters, while sophomore forward Cole Coonrod found his shooting stroke to contribute six points on 2-of-4 3-point shooting.

Behind that group and Braxmeyer, who led the team with 18 points, Manhattan actually outscored Topeka West by two points in the half.

However, the second-half victory didn’t matter much in the grand scheme of things, as the Indians fell to 1-3 on the year. It is the program’s worst start since the 2009-2010 season, in which Manhattan finished 11-11.

MHS will have ample time to think over its start, as the Indians don’t play again until Jan. 8 against Highland Park. For George and Braxmeyer, the pair only can hope the time away from the court will allow the team to regroup for the long haul.