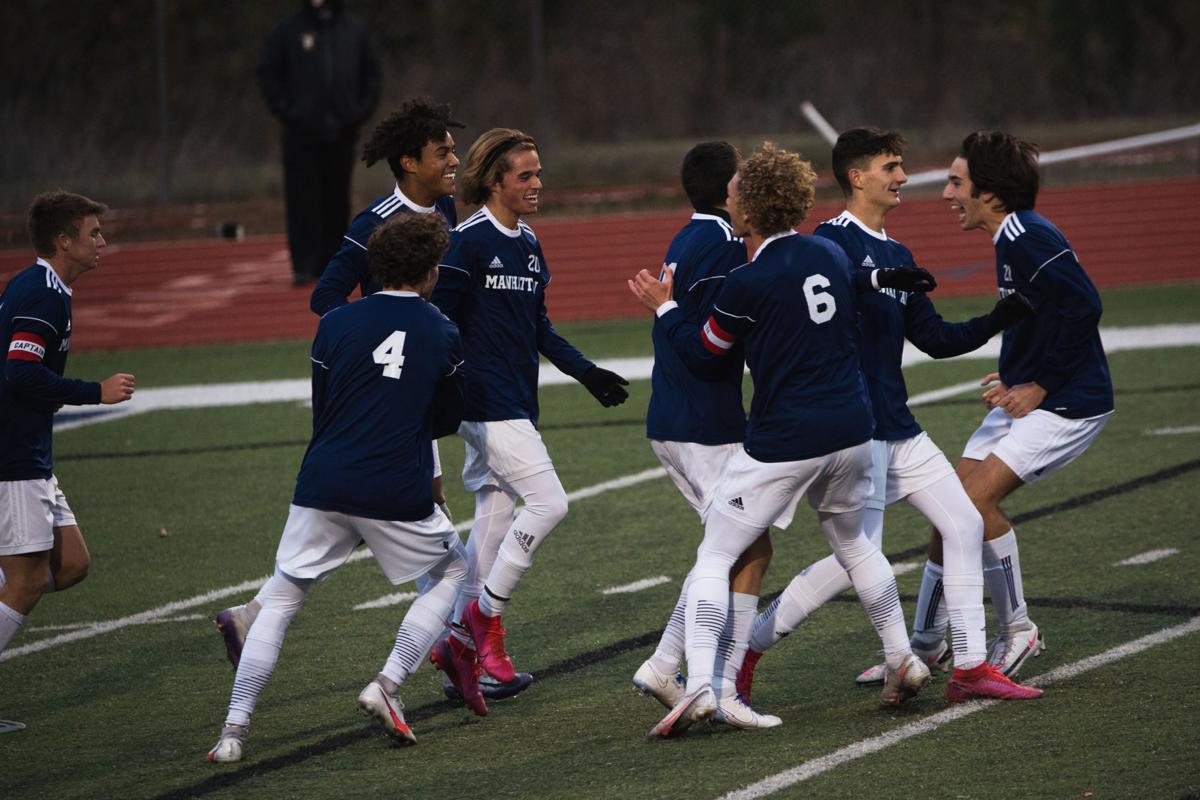 Manhattan celebrates after Colton Frieling’s second half goal puts the Indians on the board Tuesday. Topeka scored a goal of its own, but MHS went on to win 5-1 to move on to the regional final. 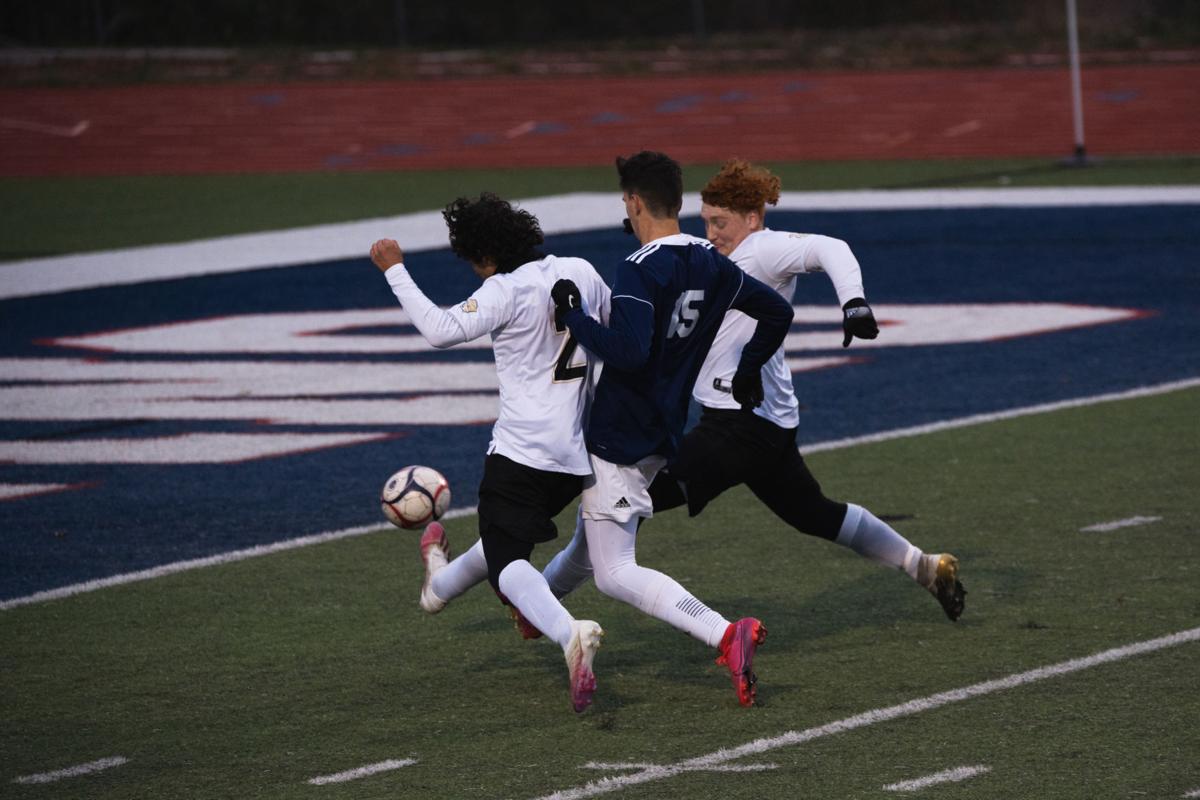 Manhattan forward Grant Snowden squeezes through Topeka defenders John Cordova and Casey Champney for the team’s third goal on Tuesday night. Snowden went on to score his second goal closer to the end of play, extending Manhattan’s victory to 5-1 over Topeka.

Manhattan celebrates after Colton Frieling’s second half goal puts the Indians on the board Tuesday. Topeka scored a goal of its own, but MHS went on to win 5-1 to move on to the regional final.

Manhattan forward Grant Snowden squeezes through Topeka defenders John Cordova and Casey Champney for the team’s third goal on Tuesday night. Snowden went on to score his second goal closer to the end of play, extending Manhattan’s victory to 5-1 over Topeka.

The gates to the Topeka High goal stayed closed for longer than the Manhattan High boys’ soccer team would have liked. But when they opened, they opened fast.

MHS topped the Trojans 5-1 Tuesday night in the first round of regionals to extend its season. It was a thumping that took some time to happen, but one that will boost the Indians’ confidence as they head onward into the playoffs.

“Thursday we have to come out and do that right away from the get go,” Indians head coach Mike Sanchez said. “Put the pressure on them and force them to play with their backs against the wall. That’s something we want to do and are hopeful we can do.”

Despite what the scoreline suggests, Topeka High gave Manhattan all it could handle for a good chunk of the game. The Trojans frustrated MHS, keeping their shape upon lost possessions and throwing numbers behind the ball defensively.

As a result, while Manhattan began to dominate possession after the first 10 minutes of the game, the Indians were confined to passing the ball along their back line as they tried to find holes. There was too little movement from Manhattan’s midfielders and forwards for Sanchez’s liking.

The coach’s adjustment had his midfielders becoming more active in taking and distributing the ball through Topeka High’s back line. With so much space left 30 to 40 yards from the Trojans’ net, it only was a matter of time before MHS midfielders Cole Schmitt and Johannes Glymour started to prod for cracks in the Topeka High defense.

Still, as the clock wound down in the first half, the Trojans refused to break. Manhattan’s opportunities came in half-chances; opportunities to put the ball on net, but usually with pressure from a defender or two.

The result was a 0-0 gridlock at half.

Inside Manhattan’s locker room, Sanchez took stock of what he saw from his opponent. He then turned to the whiteboard to draw out exactly how he wanted his team to break its foe.

“We talked about certain runs they could make and what to look for on the dribble and off the dribble,” Sanchez said. “We could draw it out and say ‘Here’s what we see, here’s how we can expose them.’ We started to attack them a little more on the diagonal and dribble, looking for the reverse-diagonal ball once we got the defense flowing.”

Schmitt was the main cog in Manhattan’s revised strategy, taking the ball and dribbling aggressively upfield any time he had the chance.

Eventually, the midfielder saw an opening. He slid a through ball across the grain of the defense to a rushing Grant Snowden. The forward took the ball at the edge of the 18-yard box and attempted to chip it over Topeka High’s onrushing goalkeeper.

However, the ball crashed off the cross bar to keep the score momentarily tied at 0-0. Then, as the ball bounced off the turf, it was met by the forehead of wing back Colton Frieling.

Frieling might as well have been miles out of position, as he had rushed from his defensive spot to out-duel one of Topeka High’s defenders about 6 yards away from the goal. The ball dribbled into the net to put Manhattan up 1-0 with 29:55 remaining in the game.

The lead would last all of 15 seconds, as Topeka High forward Cesar Orozco capitalized on a mixup in the MHS back line to score the Trojans’ first, and ultimately, only, goal.

The mistake could have crushed the Indians, as it seemed to wipe out all of the work they put into taking their brief lead. However, the group stayed focused on its tactics.

Topeka High couldn’t muster an answer, as Schmitt, Glymour and a host of other Indians’ midfielders carved up the Trojans’ defense. At the 26:32 mark, Schmitt once again found an opening.

In almost the exact same pass with which he set up Snowden, Schmitt threaded a through ball to forward Michael Ohler in space. Ohler took one touch inside the 18-yard box before cooly finessing the ball into the far right netting to give Manhattan a 2-1 lead.

It was more of the same in the final 20 minutes, as Snowden found the net twice while forward Gedrick Comiso also contributed a goal. An assist was attributed to Schmitt on Snowden’s first goal. It was the 26th of his career, which ranks fourth all time for Manhattan.

“When the forward line moves, it opens up space for us, and when we’re all moving, it’s like eating pancakes. It’s so satisfying,” Schmitt said. “When we do that, we get so many opportunities. It wore them out after 10 to 12 minutes. We did that all night.”

“We need to be less timid,” Schmitt said. “When we go there, it’s more our mentality, not our play. If we play like we did tonight and against Shawnee Heights, I think we have a good chance. If we go in with an open mind, we’ll have a good chance.”