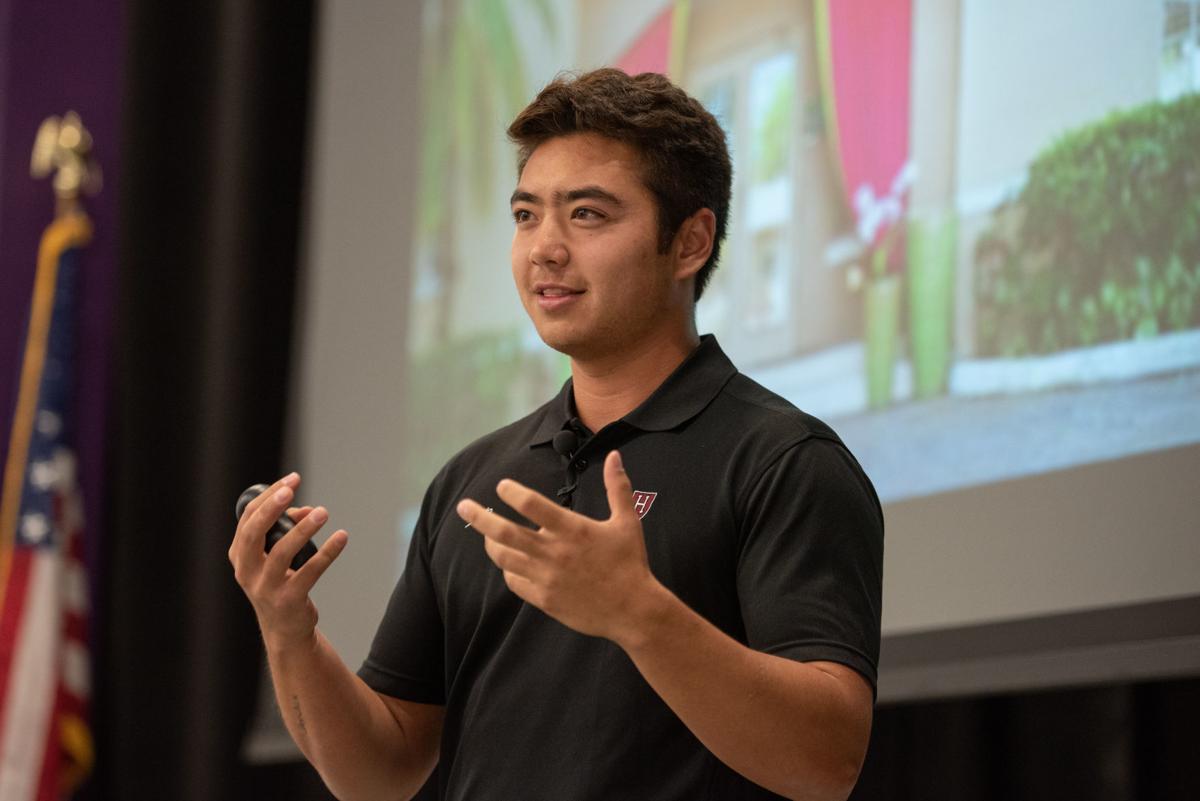 Schuyler Bailar speaks in the Wildcat Chamber at K-State’s Student Union on Tuesday. Over the past three years, Bailar has delivered more than 100 talks about his experience. Tuesday evening’s K-State lecture kicked off his campus tour. 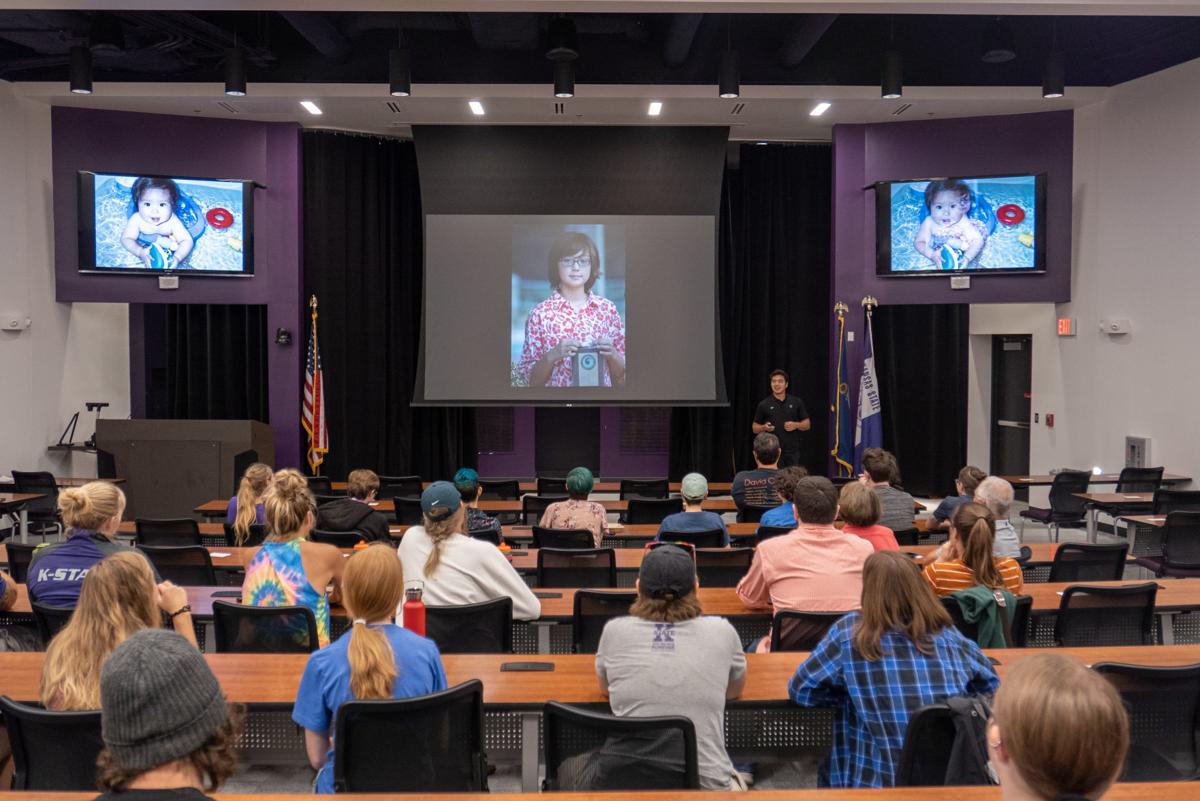 Schuyler Bailar speaks in the Wildcat Chamber at K-State’s Student Union on Tuesday. Over the past three years, Bailar has delivered over 100 talks about his experience and this talk with K-State students kick’s off his campus tour.

Schuyler Bailar speaks in the Wildcat Chamber at K-State’s Student Union on Tuesday. Over the past three years, Bailar has delivered more than 100 talks about his experience. Tuesday evening’s K-State lecture kicked off his campus tour.

Schuyler Bailar speaks in the Wildcat Chamber at K-State’s Student Union on Tuesday. Over the past three years, Bailar has delivered over 100 talks about his experience and this talk with K-State students kick’s off his campus tour.

As a transgender man, Schuyler Bailar said he’s used to questions that some people might find weird, strange and even offensive.

He said he’s grown used to it, but as the first openly transgender athlete to compete on an NCAA Division I men’s team, he’s taken those questions as an opportunity to educate. He’s embarking on a 25-city question-and-answer tour, and K-State was the first stop Tuesday evening.

Bailar said he was assigned a female gender at birth, but he always struggled with that identity. Presenting as a tomboyish girl in elementary school, he was bullied, and he never felt accepted by either his female or male classmates.

“I spent most of my childhood presenting in a way that was most comfortable to me, and that ended up being in this masculine, boyish way,” Bailar said. “But I was bullied a lot, and I was kicked out of most of the girls’ bathrooms that I went into. I just had to pee. I was a little kid — I didn’t know any better. I was going to the girls’ bathroom because I was told I had to.”

In middle school, he started to feel disconnected from others around him, and when he would come home from school crying, his parents tried to help but weren’t sure how.

“My dad would tell me, ‘When you grow up, you’re going to be this beautiful woman, and all the guys are going to want to date you, and all of the girls will want to be like you,’” Bailar recalled.

So Bailar tried to grow into this idea of a “beautiful woman.” He ditched a Justin Bieber-esque haircut, started wearing makeup, heels and other womanly items. As a teenage girl, he knew that he was attracted to women, so he had a girlfriend.

Bailar was also a model student. With a 4.0 GPA and a spot on the varsity girls’ swim team, he set national swim records and started attracting the attention of Ivy League swim recruiters. He committed to Harvard and was set to join its team upon graduation.

But he was miserable.

“I was so sad,” Bailar said. “I felt so disconnected from the people around me, and I couldn’t figure out why. And instead of stopping to figure that out, I just kind of said, ‘I’m going to keep swimming, and it’ll be fine.’”

A back injury his junior year of high school kept him from swimming, and while he fully recovered over just a few months, he said that made him spiral further into his mental health problems.

His senior year, a therapist recommended he take a gap year before going to Harvard. With his future coach’s blessing, he moved into a residential treatment facility for mental health when he graduated.

He stayed there 131 days, and it was during his time at the facility that he realized he was transgender.

“That was the first time that required me to stop and think about myself,” Bailar said. “I had to figure out where this misery was coming from.”

Bailar said that revelation was initially a great relief, but that relief turned to worry. What would happen to his spot on the Harvard women’s swim team?

Bailar’s coach was in constant contact, and when Bailar told her he was dealing with several issues, including gender, she stopped him, and asked him what he meant by gender.

“I realized I had spent all this time trying to be honest with myself,” Bailar said, “and I owed it to myself to be honest with her. So I told her that I thought I was transgender, and I had no idea what that implied for that sport. All I knew is that I wanted to swim.

“She paused, too, and said, ‘You know, Schuyler, I recruited you, and the team loves you, and I love you. If you want to swim, you have a spot on this team, and we’ll figure it out,’” Bailar continued.

Once Bailar arrived on campus, though, he realized that identifying as a man but competing with the women was “a step backward.” His coach helped him secure a spot on the men’s team, who welcomed him just as warmly as the women, he said.

After “top surgery” (removal of both breasts), Bailar was about to compete in his first meet in college, and he was freaking out. It was his first meet as a male, and his first meet after a two-year break from swimming. Everything was different, and he started having doubts.

But then he realized that everything was actually the same. It was the same 100-yard race length, the same six breast strokes to take him across the pool, and the same natatorium and chlorine feeling.

Bailar’s pre-meet ritual was to hook his thumb underneath the strap of his women’s swim suit, but at this meet, he was topless. He said he instinctually felt around for the strap but didn’t find it.

“In that moment, I realized that everything is the same but also different,” Bailar said. “I realized I was competing as just myself. There wasn’t all this baggage of who I was supposed to be or who I had to be. I was just me.”

He graduated from Harvard this spring after a swim career that included three Ivy League team championships and placement in the the top 15% of NCAA swims in the 100-yard breaststroke. Bailar said he’s touring the country to help people accept themselves for who they are and answering questions to help others accept transgender people.

“I think it’s ridiculous to suppose that everyone is going to understand everybody; it can’t happen,” Bailar said. “But you can love and respect people. I don’t understand multivariable calculus — never have, never will, don’t want to — but that doesn’t make it false or any less real. That doesn’t mean that people who study it are bad. I don’t understand it, and that’s fine.”

“Sports are huge at K-State, and as we’re trying to become a more diverse and inclusive institution, we can think about how that applies to sports in terms of who is making up our teams and their acceptance in the broader community,” Sharpe said.

Stephanie Parze's dad: Our lives will never be the same