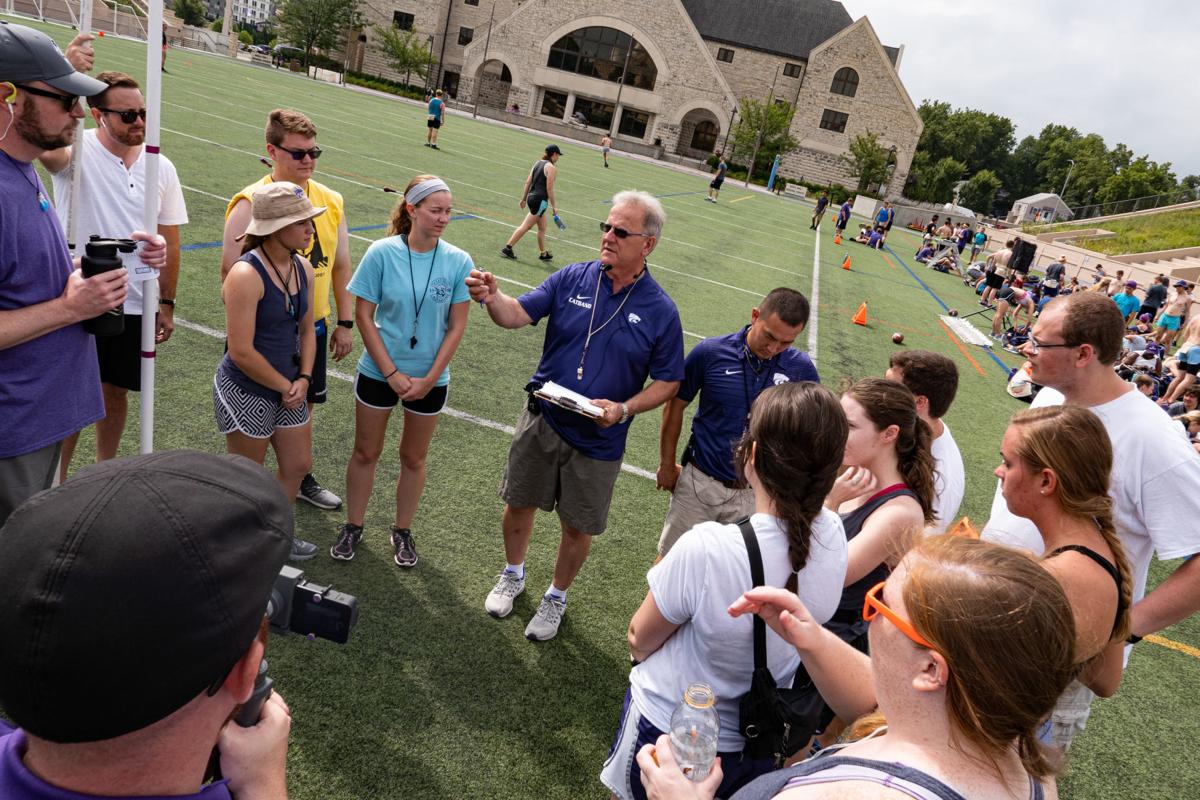 Frank Tracz, K-State’s band director, talks with his team during a break at band practice on Friday. 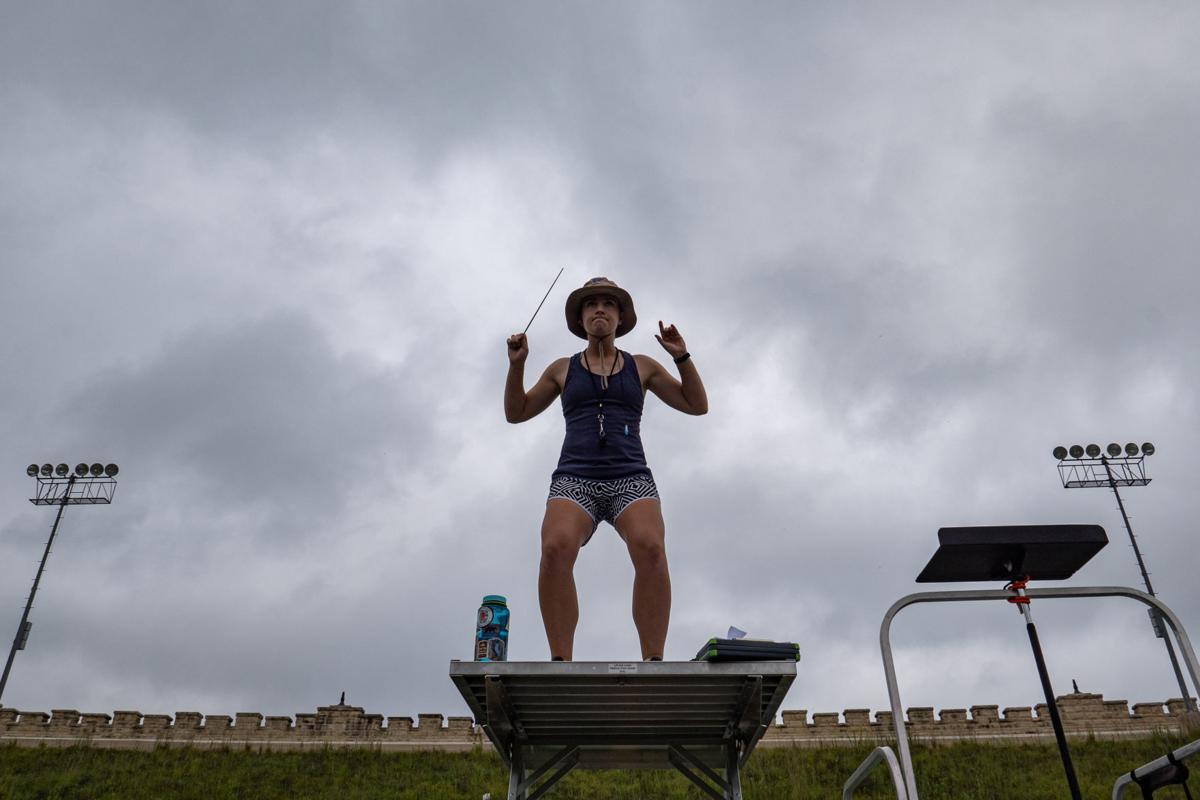 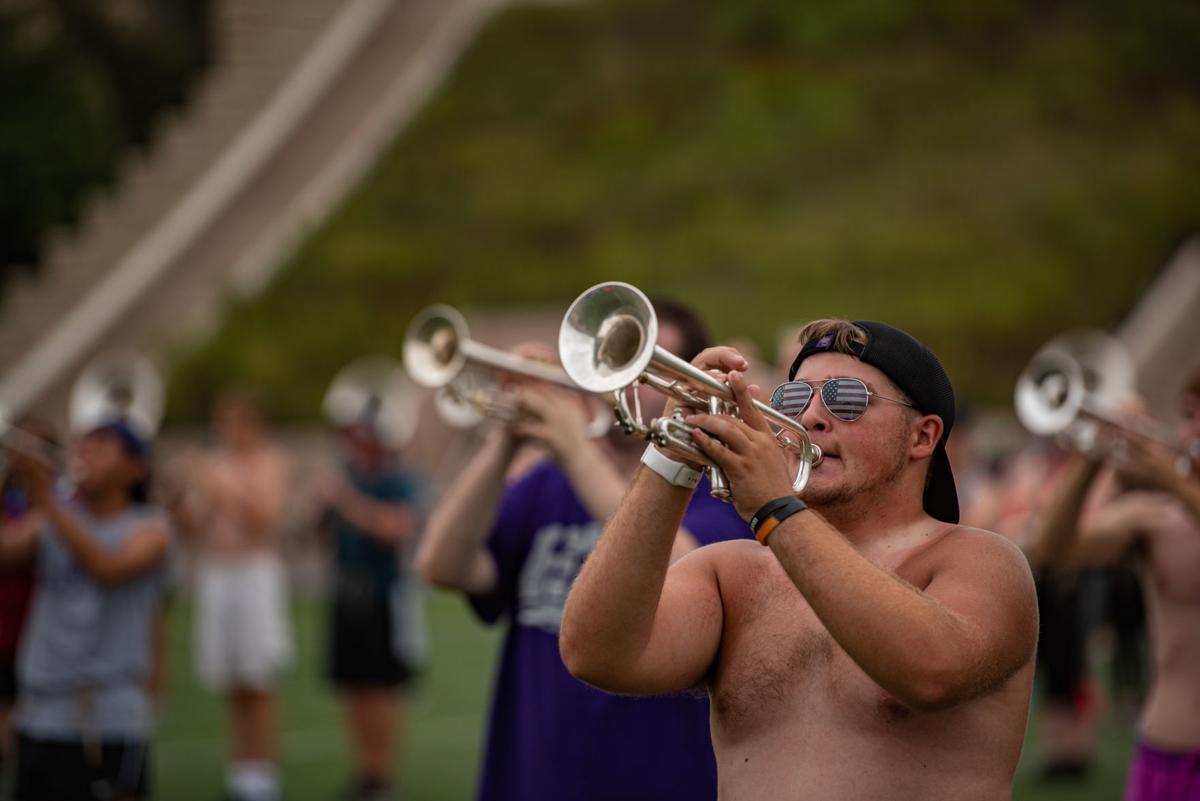 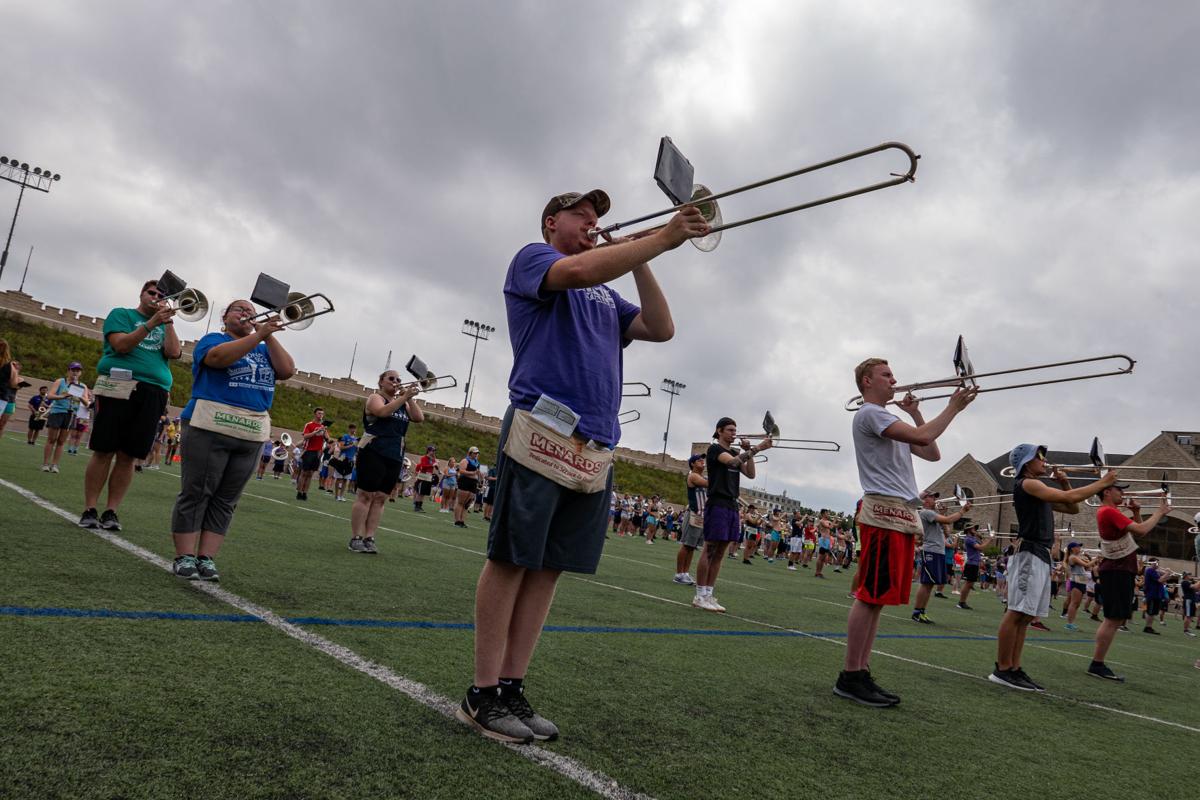 Trombone players line up during a practice at Memorial Stadium Friday. 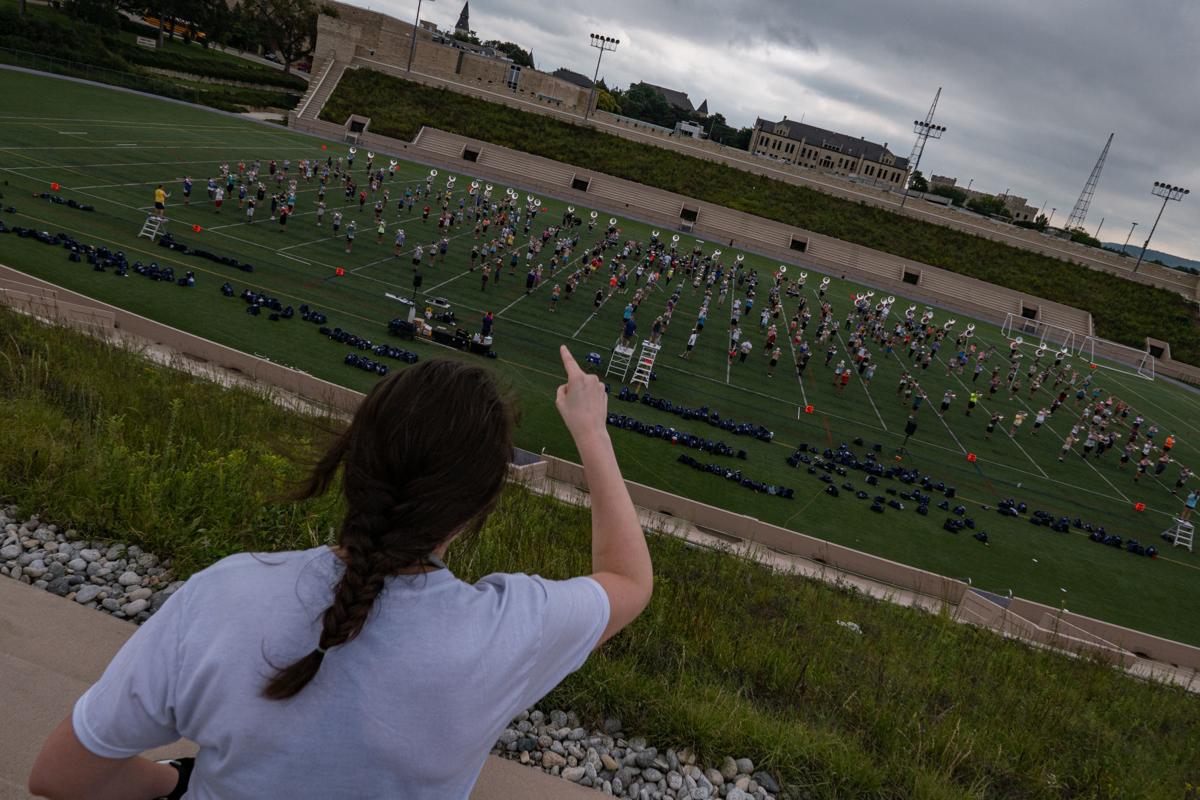 Allegra Fisher, a graduate assistant, gives directions from the grandstands at Memorial Stadium during K-State’s band practice on Friday. 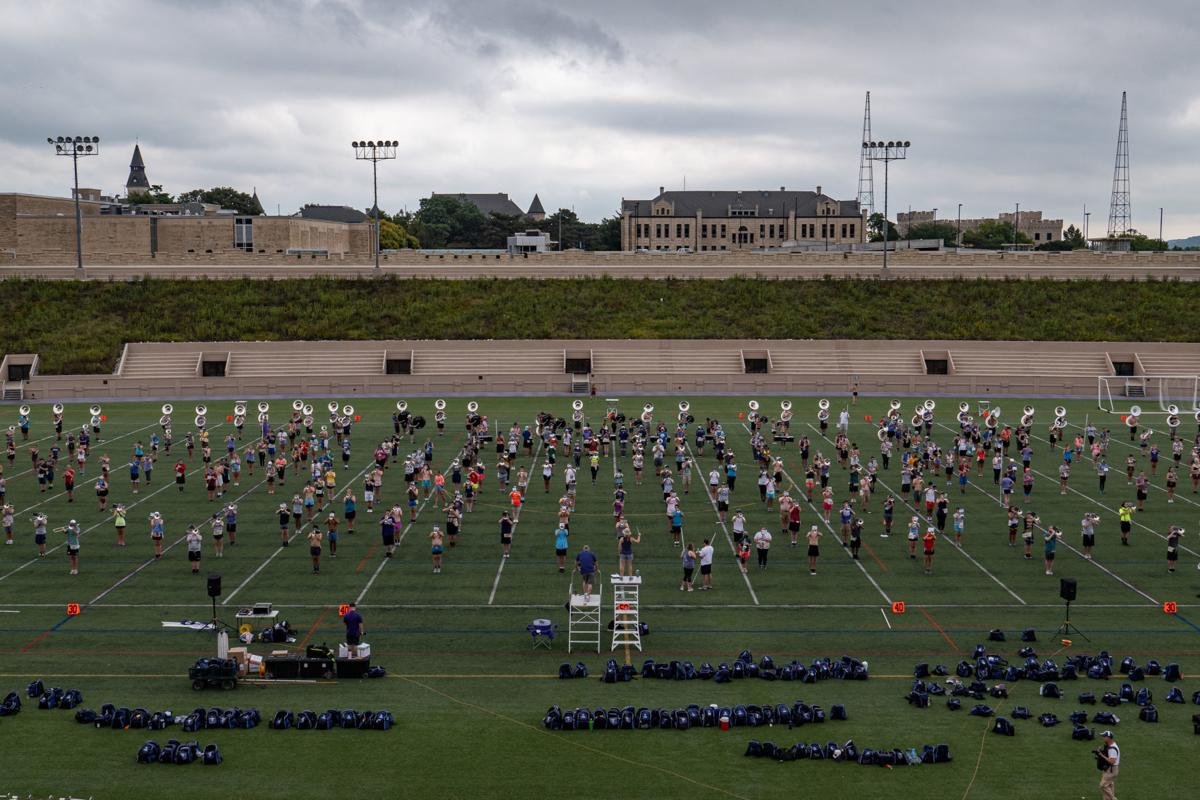 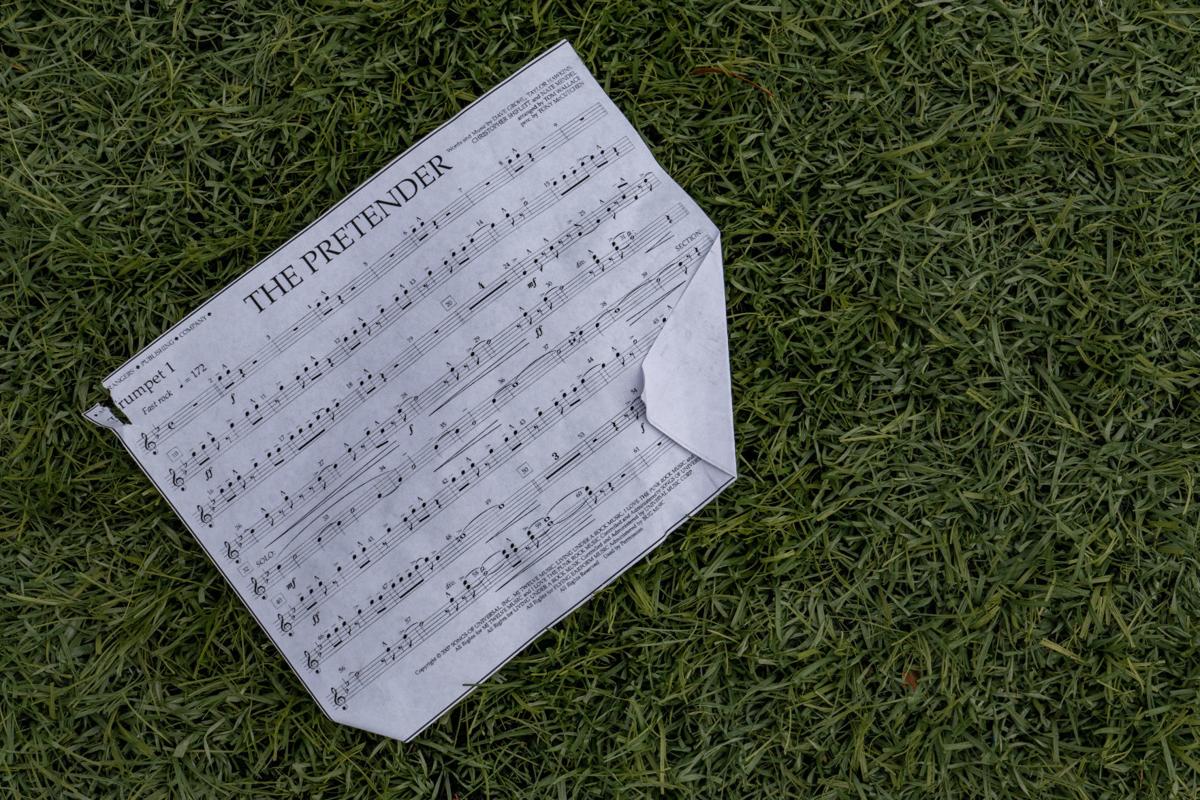 A music sheet for ‘The Pretender’ is seen on the field at K-State’s band practice at Memorial Stadium on Friday. 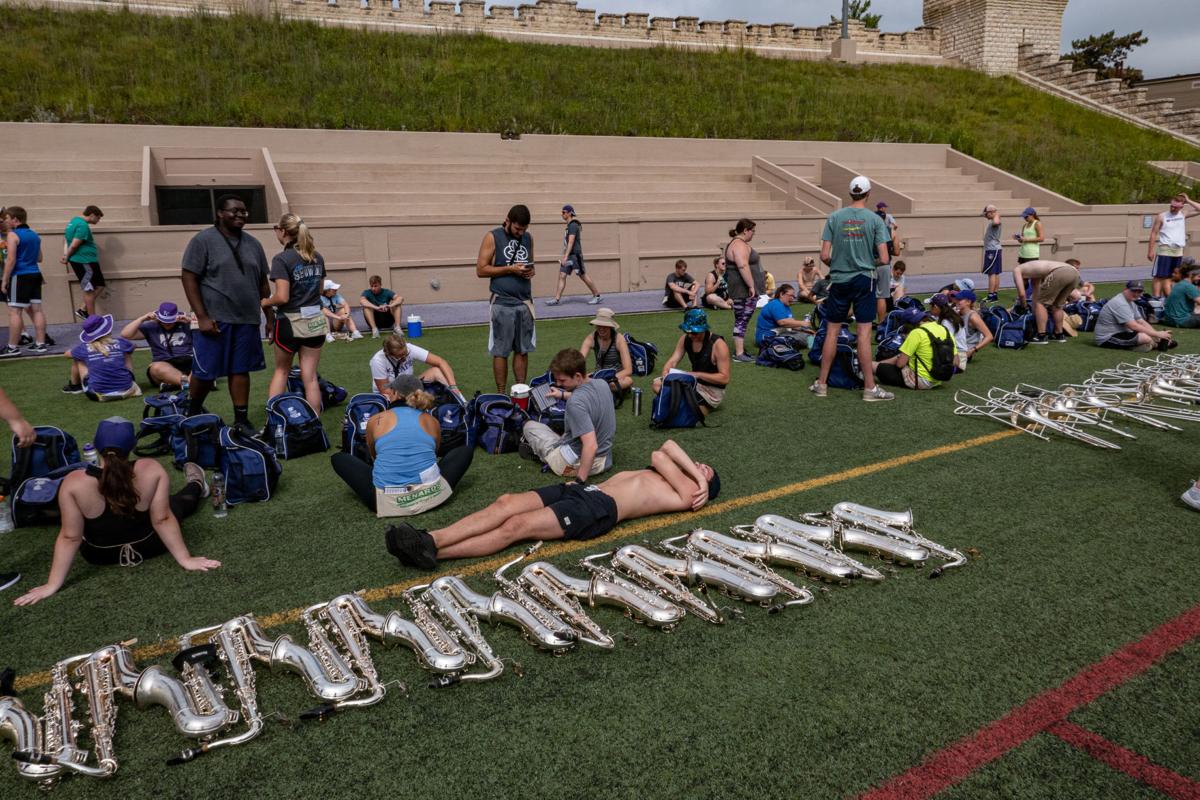 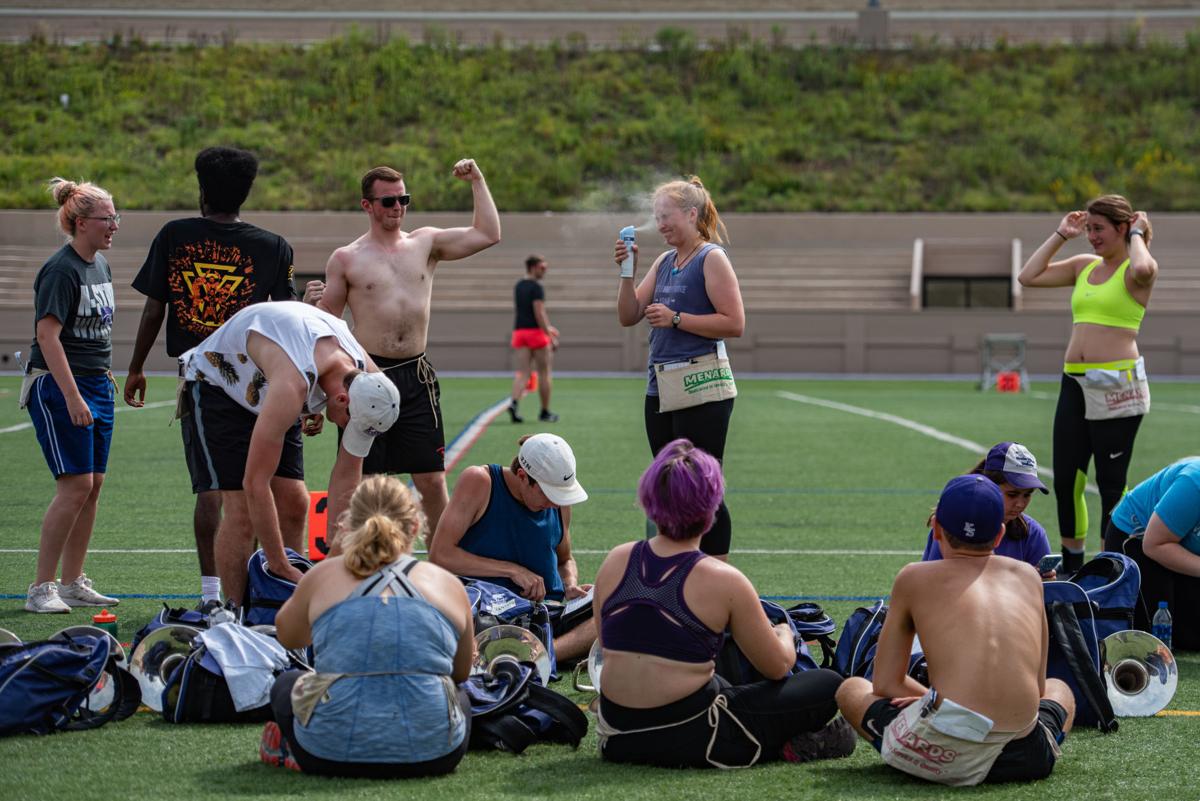 Frank Tracz, K-State’s band director, talks with his team during a break at band practice on Friday.

Trombone players line up during a practice at Memorial Stadium Friday.

Allegra Fisher, a graduate assistant, gives directions from the grandstands at Memorial Stadium during K-State’s band practice on Friday.

A music sheet for ‘The Pretender’ is seen on the field at K-State’s band practice at Memorial Stadium on Friday.

Band camp hadn’t even started for them yet, and the rookie hopefuls were already sweating.

On K-State’s campus, All Faith’s Chapel was abuzz Tuesday morning with the same kind of anxious excitement that precedes each season’s football home opener at Bill Snyder Family Stadium. But at the same time, the room was also full of the same nerves that fill each 100-level fall semester class. For many of these band hopefuls, this was not only their first marching band experience — it was their first university experience, period.

Jared Jackson and Joe Rentier, freshmen friends from Topeka, had participated in band in high school, but they knew the K-State marching band dwarfed their previous experiences.

“Everyone here, you know they joined band because they were great in high school or have practiced a lot, so you know there’s a lot of competition,” Rentier said.

“I think it’s going to be a lot of fun, meeting new people and all that, but it’s definitely going to be stressful,” Jackson said. “It’ll be a lot of hard work, but I think we’ll survive.”

Besides the senior bandleaders, who sat in a noisy bunch at the front of the chapel, the mostly freshmen band members sat in small clusters with friends from their high schools or with other people who played the same instruments. The more socially anxious rookies sat by themselves, at least until the upperclassmen instructed them to fill in the first few rows and get used to doing that.

On a large screen at the head of the chapel, a projector started to show some of the band’s recent halftime shows — like “The Greatest Showman” musical show and a tribute to Queen — and the rolling thunder of the video band’s drumline substituted for some of the chatter. They watched as former bands marched through intricate formations and painstakingly rehearsed songs, and as the videos ended and the bands reached a final flare, the PA announcer boomed:

“Ladies and gentlemen, the Pride of Wildcat Land— the K-State marching band!”

Happiest day of the year

Precisely at the video’s end and right on schedule, Frank Tracz paced down the chapel’s aisle, turned about-face and began his yearly address to the rookies. There were only so many minutes until the football team kicked off against Nichols State at 6:04 p.m. 11 days later, and the marching band director was not going to waste a single one.

Going through his welcome and procedural points in rapid fire, with a few interspersed jokes, Tracz put the anxious room of rookies at ease. He slowed his beat and leveled with the newbies about what they were getting into.

“We appreciate you being here,” Tracz, alongside assistant director Alex Wimmer, told the group. “This is a great opportunity for you, the experience of a lifetime. This is a quality group, and quality groups don’t happen if we don’t have quality people. This is old school. This is blue collar, dirty fingernails, scuffed up elbows work. You’re going to get your hair messed up, and you’re going to smell funny.”

In a year of transition for K-State, with a new football coach and dean of students replacing institutional legends at the university, Tracz said the band would be a rock for the campus community.

It’s a new era, but the same pride, Tracz said, and the band hopefuls would not find pressure, but a challenge in the marching band process. He said the system would push them to their limits, but the band would do everything in its power to get them through the end.

He told them about how the band’s space in the aging McCain building “sucked” — he’s a tenured professor, so he can say that, he explained — but he and other university officials hope to soon begin a fundraising effort to build a 15,000-square-foot marching band hall on the northwest side of Memorial Stadium, once costs are nailed down. K-State is the only Power Five conference marching band without a dedicated band rehearsal hall, Tracz said.

The potential practice space is years away, though, and the band must deal with its challenges for the time being.

“That’s the lesson we’re going to give you,” Tracz continued. “We’re going to challenge you. We’re going to make you feel like you can’t go any farther and the end is near, but it’s not — the sun is going to come up tomorrow. And the best part of it is that one week from this Saturday, it’s the happiest day of the year. It’s when we get to go and be a marching band, and I become 18 again.”

Two days later, Tracz was not yet 18. He was a 63-year-old man, the weathered veteran of 27 seasons with the marching band. With a brace on his knee, Tracz walked to the stage in front of the band as it rehearsed in McCain Auditorium Thursday evening. His head pointed at the ground but ears perked up, he listened to his band start to take shape.

He stopped them and asked them for commitment — for them to push through the exhaustion and the pain, and to give him a good outdoor rehearsal. However tired they were, band members listened to him and followed Tracz as he led them in a march across campus to Memorial Stadium.

That morning, the band did not yet know its pregame show, but at the stadium, the Wabash Cannonball started to come together, first as the band sang their parts and then later when they put instruments to the jazzy notes. Tracz and the drum majors dodged through the band as it practiced its pregame marching, making small adjustments and putting band members into their proper places.

Every year, the band cycles through tenured band leaders and eager rookies, but the kids themselves don’t change, Tracz said.

Instead, the band’s approach changes.

“I think society has changed, and parents and teachers expect a lot less out of our kids than they ever have,” Tracz said. “But we expect a lot out of these kids, and they give it. But you do need a lot more sunshine and motivation.

“The kids own this band, I don’t,” he continued. “I’m just renting the leadership position for a few years. On Saturdays, this is their school. It’s their stadium, it’s their football team, and that’s the way it should be.”

Head drum major Madison Hines said months of preparation have gone into the season, with student leaders reporting before camp to take care of logistics. Hines, a senior, stepped into the head drum major role after serving as an assistant drum major last year.

“It can definitely be intimidating the first time that you get up in front of the band and do it, but I was well prepared by previous drum majors and well-equipped by the directors and graduate assistants,” Hines said. “I try to put my nerves aside for them and have fun and make it a good experience for them.”

In the coming weeks, the 400-person band will practice a Beatles tribute show and a show that will commemorate the 50th anniversary of Woodstock. The band will also have a military appreciation show honoring D-Day survivors, with a few survivors expected to attend the show, Tracz said.

The Thursday practice dragged into the late evening, and Tracz yelled for the student support staff to turn on the stadium lights. Weary and inexperienced legs struggled to keep up with the high-stakes pace of the band, and Tracz said the band still had a long way to go before next Saturday’s football game.

“I’m slower now,” Tracz said. “It takes a lot more Gatorade and ice bags than it used to. The bad part is that I’m getting old and it hurts.”

But between the ice bags and bandages and cortisone shots, Tracz had not yet given any thought to retirement. He still has kids in college and in graduate school, and he still very much enjoys the job, he said. An Ohio transplant, Tracz’s original plan had been to eventually go back to his home state after his stint in Manhattan.

But even in his years of travels, he hasn’t found a place quite like K-State, he said.

“I tell people, there’s something different about this place that I can’t put my finger on, but it’s different in a very positive fashion,” Tracz said. “I didn’t think I’d stay here more than a few years, but I found a home and I’m building a kingdom.”